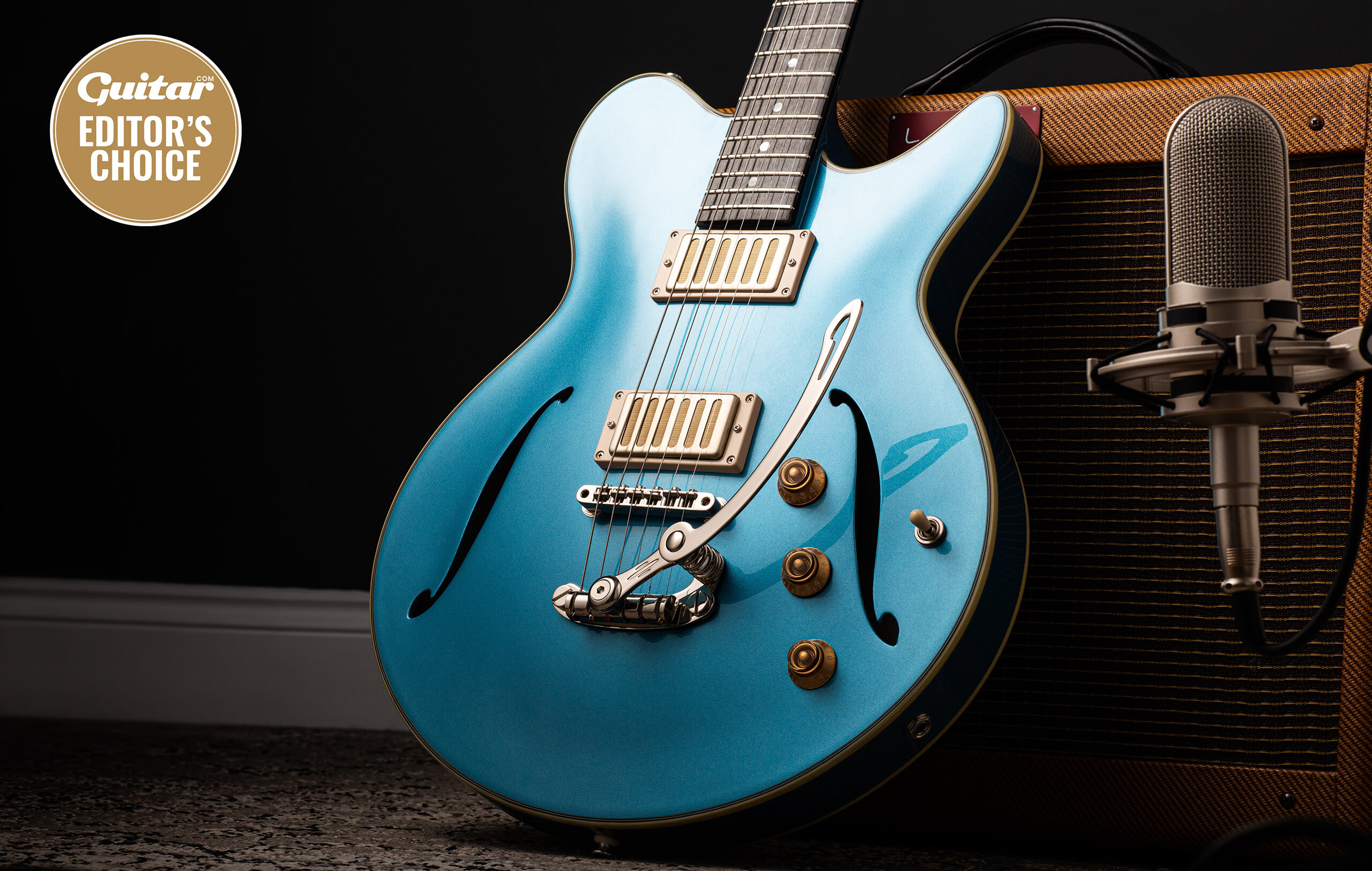 Eastman’s svelte hollowbody gets a West Coast makeover – are we California Dreamin’ or Pacific Ocean Blue?

Jangle and raunch aplenty from an inspiring original design.

A classy original design from master luthier Otto D’Ambrosio, the Eastman Romeo arrived on the map in 2019 seeking to answer the question, “What would the Telecaster of the archtop world look and sound like?” The following year, Romeo SC went further down that road by swapping the neck humbucker for a hum-cancelling Telecaster neck pickup, the Seymour Duncan Vintage Stack. Now Romeo’s third incarnation has been unveiled and it steers the model into hot-rod territory with the addition of a custom-colour metallic finish and the switch to fully laminated body construction, a vibrato tailpiece and raw nickel Radiator pickup covers with gold foil peeking through the slots.

“We were thinking about what we could do to create an addition to the Romeo line that would appeal to a different player and have a different sound, and the first thing we did was look for a new colour,” says Eastman’s International Sales & Product Manager Pepijn ‘t Hart when we quiz him about the new model. “Otto once did an incredible USA-made custom edition of a T486 in Celestine Blue, a colour that he created specifically for the one-off guitar. It has always been one of my favorite colours. This was the challenge, to have our Beijing workshop colour specialist, Hua Rong, recreate this colour for Romeo LA. As always, she succeeded with honours!” 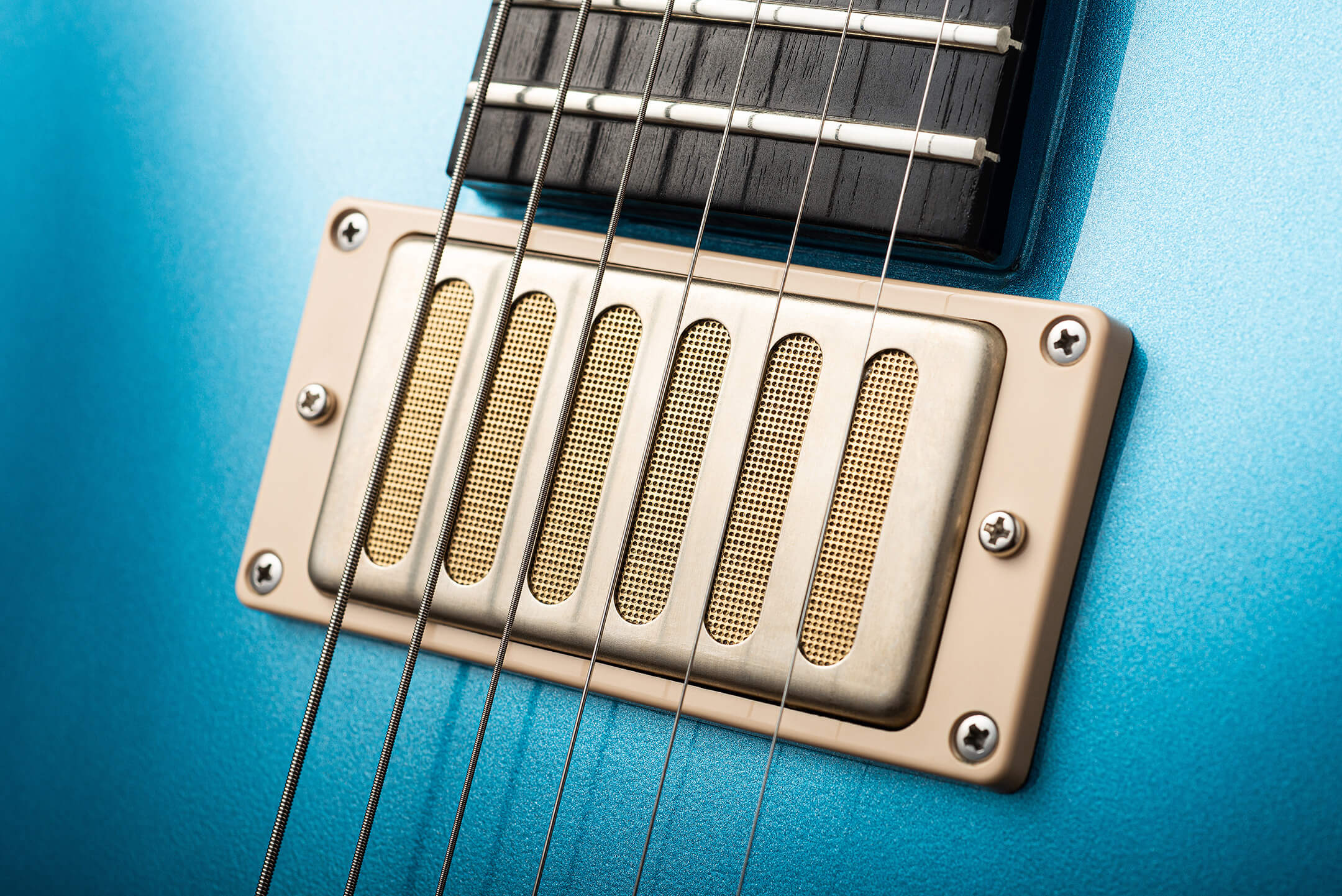 With the paintjob finalised, next came the wood choices and hardware. “We changed the wood to a fully laminated version – laminated spruce top, laminated mahogany back and sides – to come closer to the classic thinline sound,” says Pepijn. “One of my wishes was also to add a vibrato system to Romeo as the design just begs for a trem. However, that turned out to be much more difficult than we initially thought.

“We wanted to add a Bigsby B3, however, the top was too carved to make that work. But I didn’t want to give up on this idea, therefore I reached out to my friend Dieter Gölsdorf [founder and owner of Duesenberg Guitars and Göldo parts] and asked him if he had a solution. Being brilliant as he is, he of course had the solution: the Göldo Les Trem. In design and functionality it’s like it was made for Romeo LA.”

This elegant Göldo unit was designed to allow players to swap a stopbar tailpiece for a vibrato system without drilling or routing, but it also acts as a space-saving option when a Bigsby isn’t practical and has an expressive, buttery feel somewhere between a Jazzmaster vibrato and a Paul Bigsby design. For the Romeo LA, Eastman chose to combine this with Göldo’s 3-Point Vario bridge – essentially an evolved tune-o-matic that minimises tilting and rattling – and back-locking tuners.

The result is stable tuning unless you take things to extremes and, thanks in no small part to the ingenuity of the tailpiece design, there’s an even, hardtail-like acoustic sustain with lively harmonic content. It’s impressive when you consider that, aside from a mahogany block beneath the bridge that couples the top and back, Romeo is fully hollow. 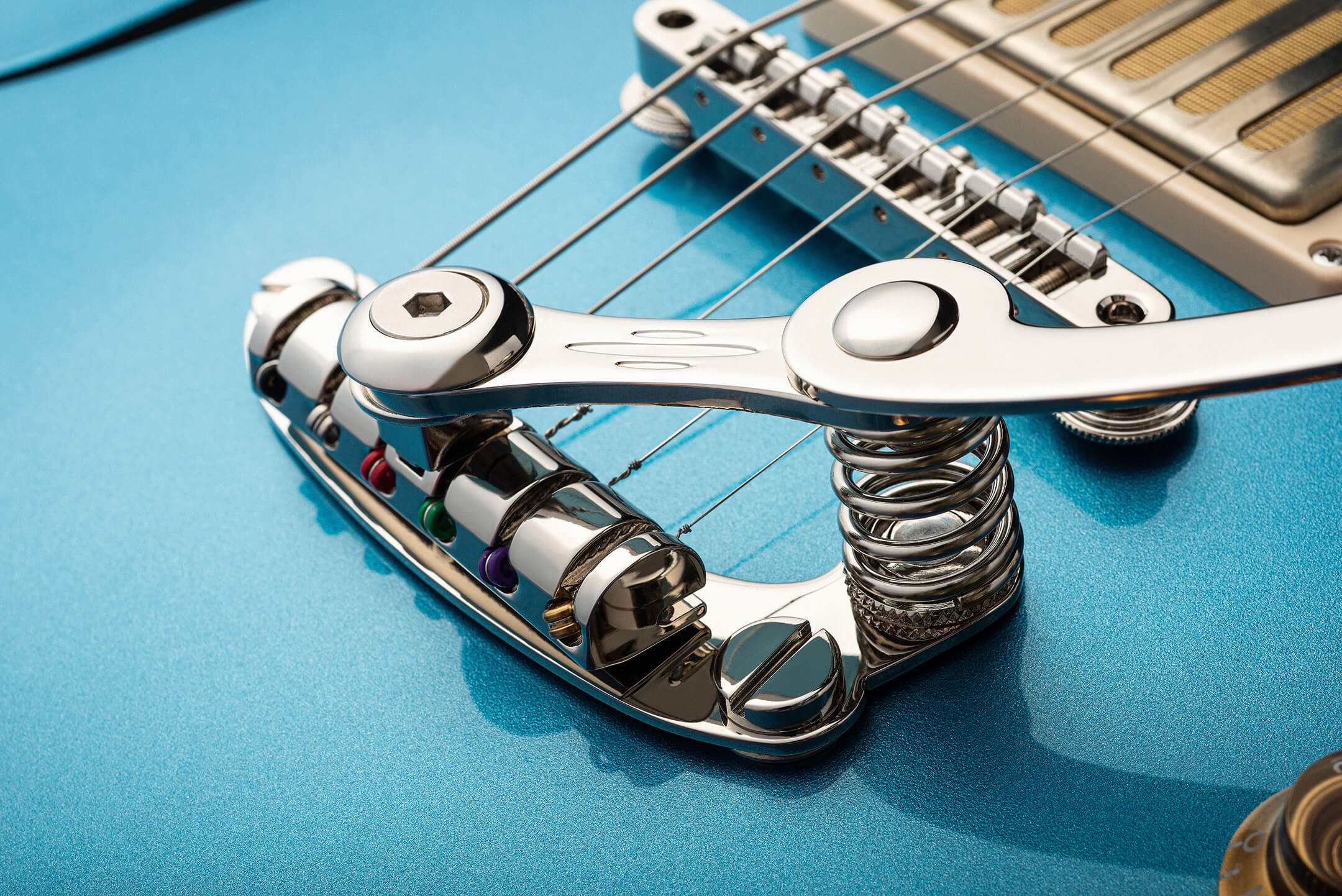 When it came to electronics, the Eastman team recognised that the guitar needed an amplified tone in keeping with its aesthetic. “The guitar needed to sound as it looks,” says Pepijn. “So a kind of surfy, airy sound, but with enough grit to be versatile. In came Seymour Duncan, with whom we created a pickup especially for Romeo LA – it’s got the SD Radiator covers with the gold foil inserts, but under the hood it has Phat Cat P-90s. This proved to be the golden ticket for this guitar. Regular gold foil pickups often don’t take pedals that well, so I didn’t want to go for that, but we did want that look.” 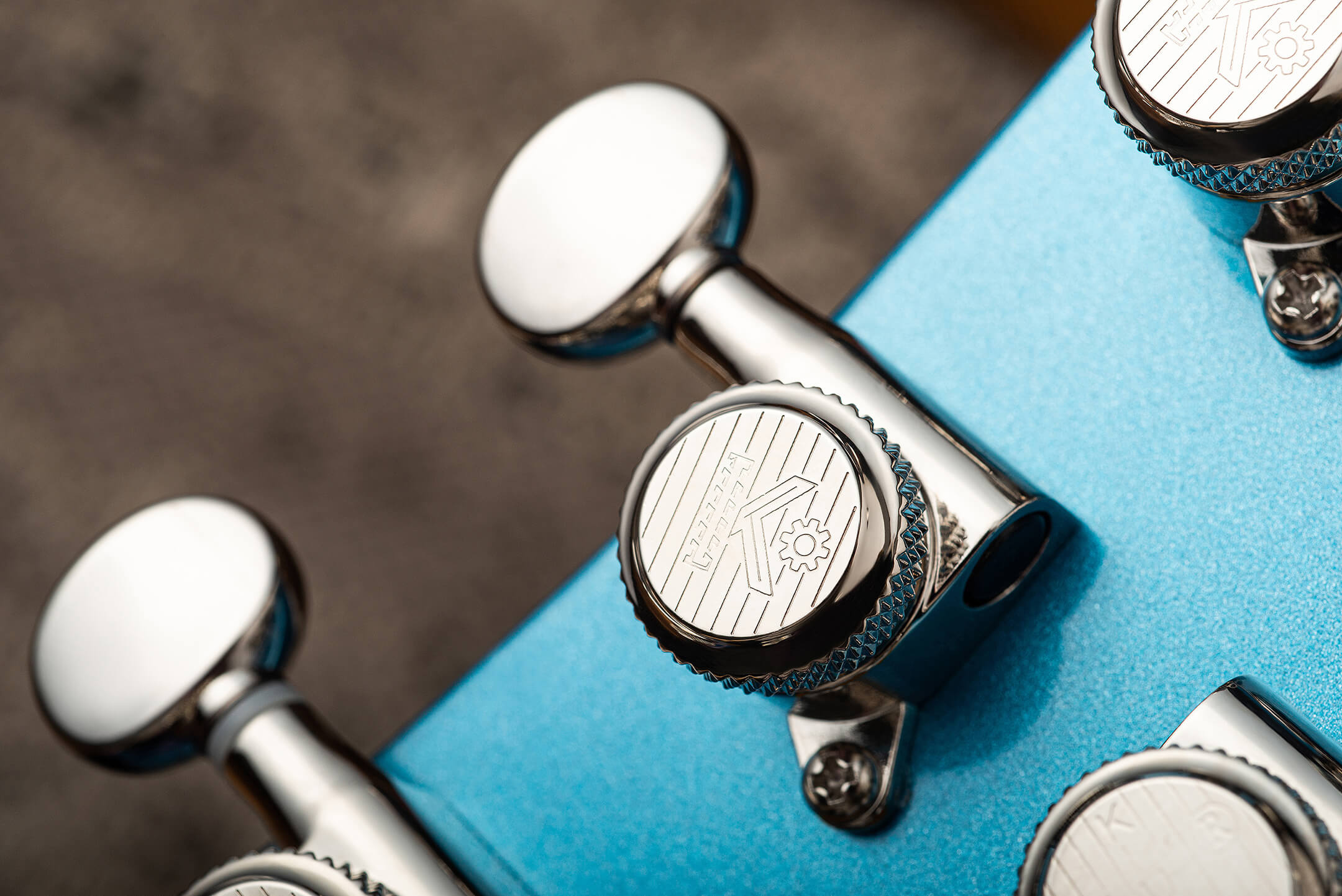 The final piece of the puzzle was the wiring. “The last change was to create a different volume and tone palette from the original Romeo, which has a single volume and two tone controls,” Pepijn explains. “Romeo LA has two volume controls and only one tone, which only works on the bridge pickup. On a guitar like this, who wants to roll off the tone on the neck pickup, which is already darker sounding? So now the player can play with the two volume controls and roll off a little of the tone on the bridge if needed. We felt this was a real player’s feature. And ultimately, Otto’s design started out as a guitar to really serve the player’s comfort and usability.” 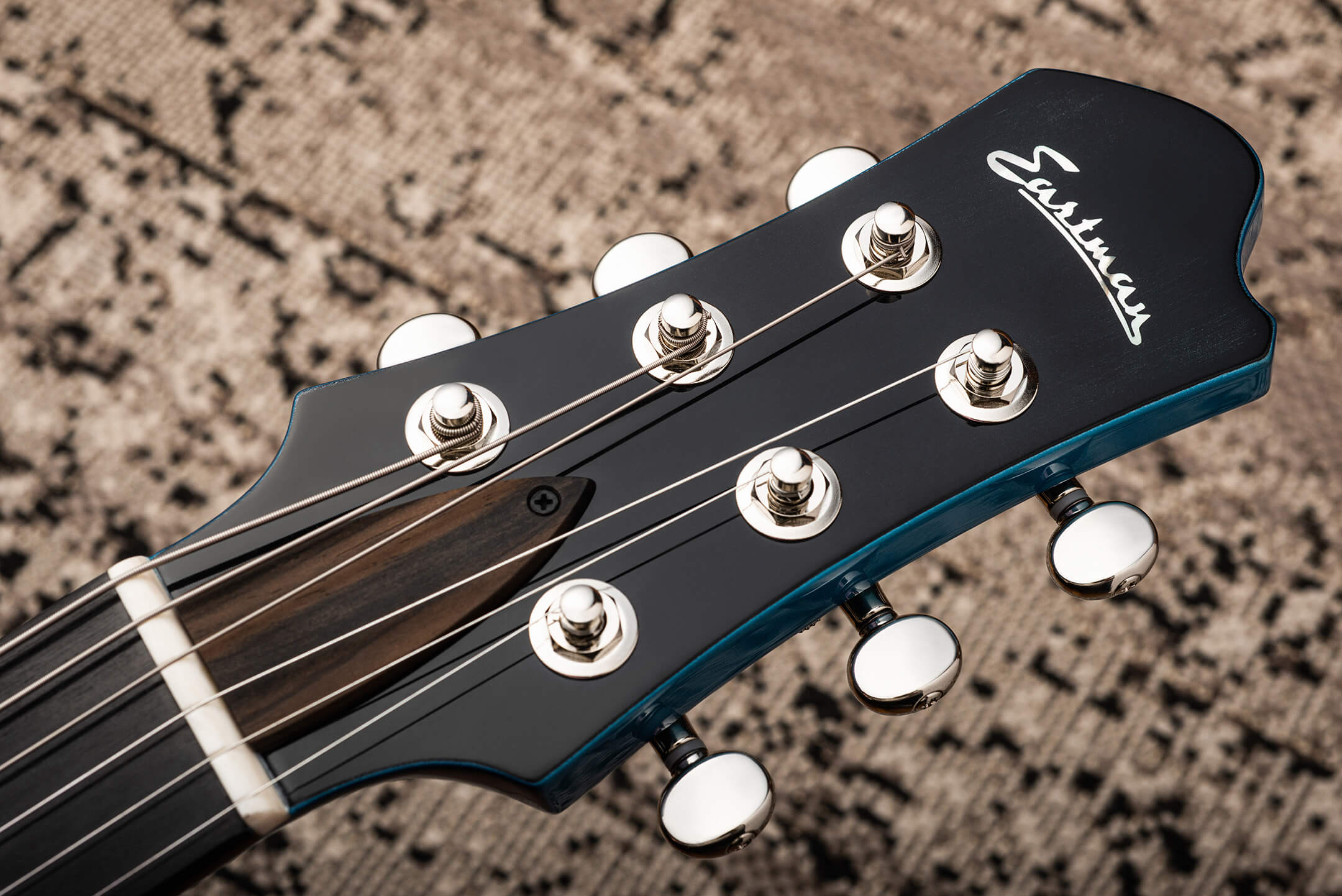 Eastman’s hand-built ethos doesn’t produce instruments made with laser-like precision but the execution here is pretty clean aside from some slight scruffiness around the f-holes. Our only real gripe is that the tiny screw meant to secure the ebony truss-rod cover to the headstock comes loose very easily indeed – a larger or second screw would easily cure this issue.

The neck’s fairly slim C profile and spacious ebony board feels fast and approachable and is unlikely to alienate too many players, likewise the guitar’s compact feel. Thanks to the additional hardware down at the tail, strapped-on balance here is even better than with Romeo’s other iterations. The pickup selector switch does feel rather a long way away when you play this guitar in a standing position and you have to work around the vibrato arm to find the other controls. As a result, we wonder if a Gretsch-style master volume on the treble horn or a pickup selector on the bass side might be easier to reach but that said, it’s obvious why the Eastman team would have been reluctant to disrupt Romeo LA’s clean lines. Guitar shop employees please note: encourage any prospective buyers to demo this thing near a mirror and you are certain to make the sale.

Hear the Romeo LA in action in our video:

There’s so much going on with this guitar acoustically, it takes us a while to plug in. But when we do, it’s instantly apparent that the Seymour Duncan pickups were an inspired choice. Phat Cats have been around for a while but we’ve never heard them sound as well-suited to an instrument as they do here. Classic P-90 punch, muscle and clarity marries with Romeo LA’s physical characteristics to bring a chime and jangle to the high-end that just loves an AC30.

Gretsch and even Rickenbacker-like characteristics mean that sixties-influenced pop is very well served indeed and those Beatles, Petty and power-pop moments sound seriously authentic. Up the gain and spring reverb and you’ll find everything from the raucous grit of Jack White and Polly Harvey to more moody, filmic textures – and if you crank the volume and ride the edge of feedback there’s an awful lot of fun to be had. 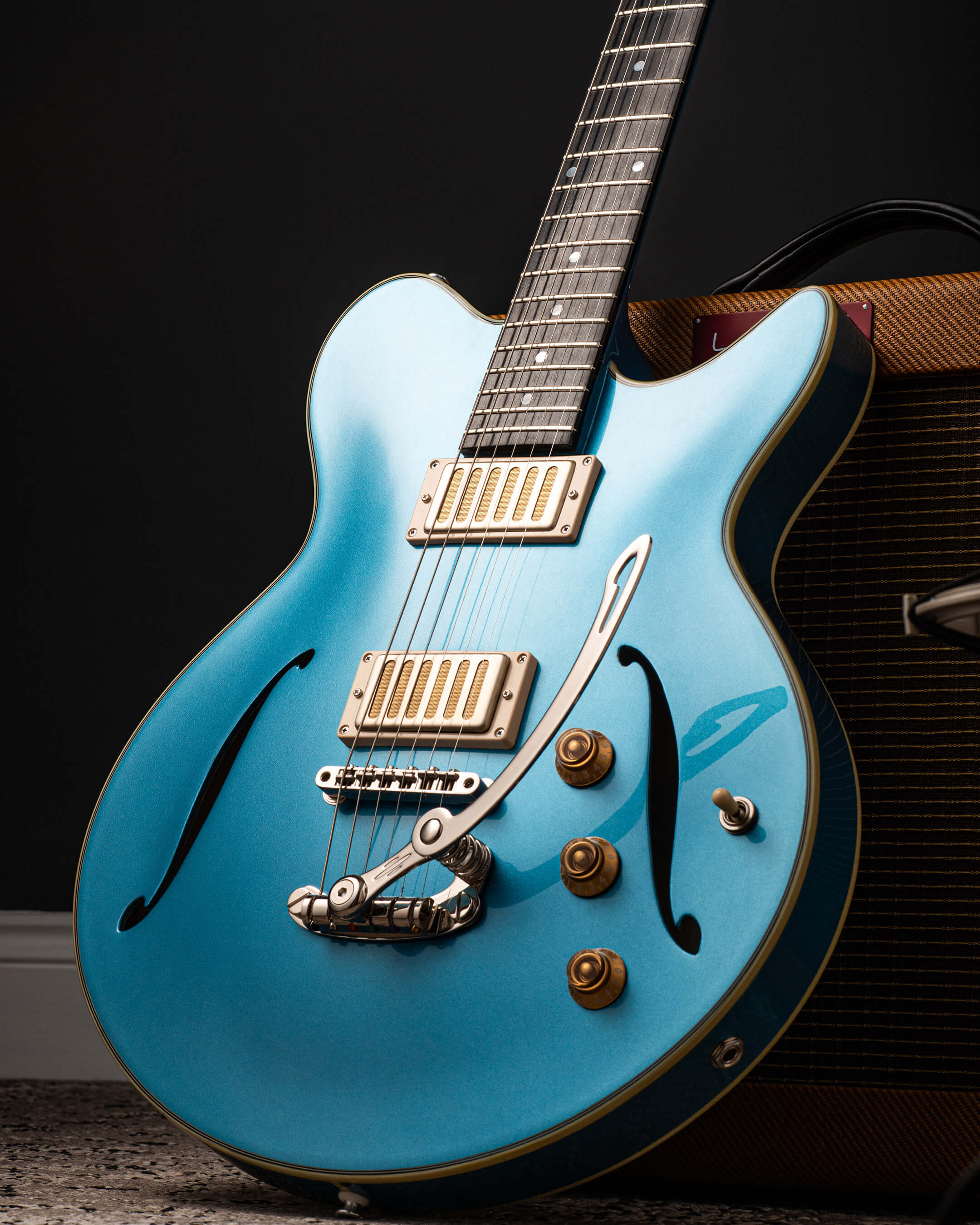 Switching to a smoother, cleaner 6V6 tone we find ourselves spending a lot of time on the neck pickup – it’s a really sweet voice with just enough percussive bite for authentic 1970s funk and soul. We don’t miss having a neck pickup tone control at all but if you want darker flavours then rolling back the tone in the middle setting works as advertised.

Though the original Romeo model would still be our recommended destination for traditionalists, Romeo LA is the most overtly ‘alternative’ Eastman model so far and it’s also our favourite. The Romeo design has already proven to be a versatile platform – we can’t wait to see where Eastman takes it next.