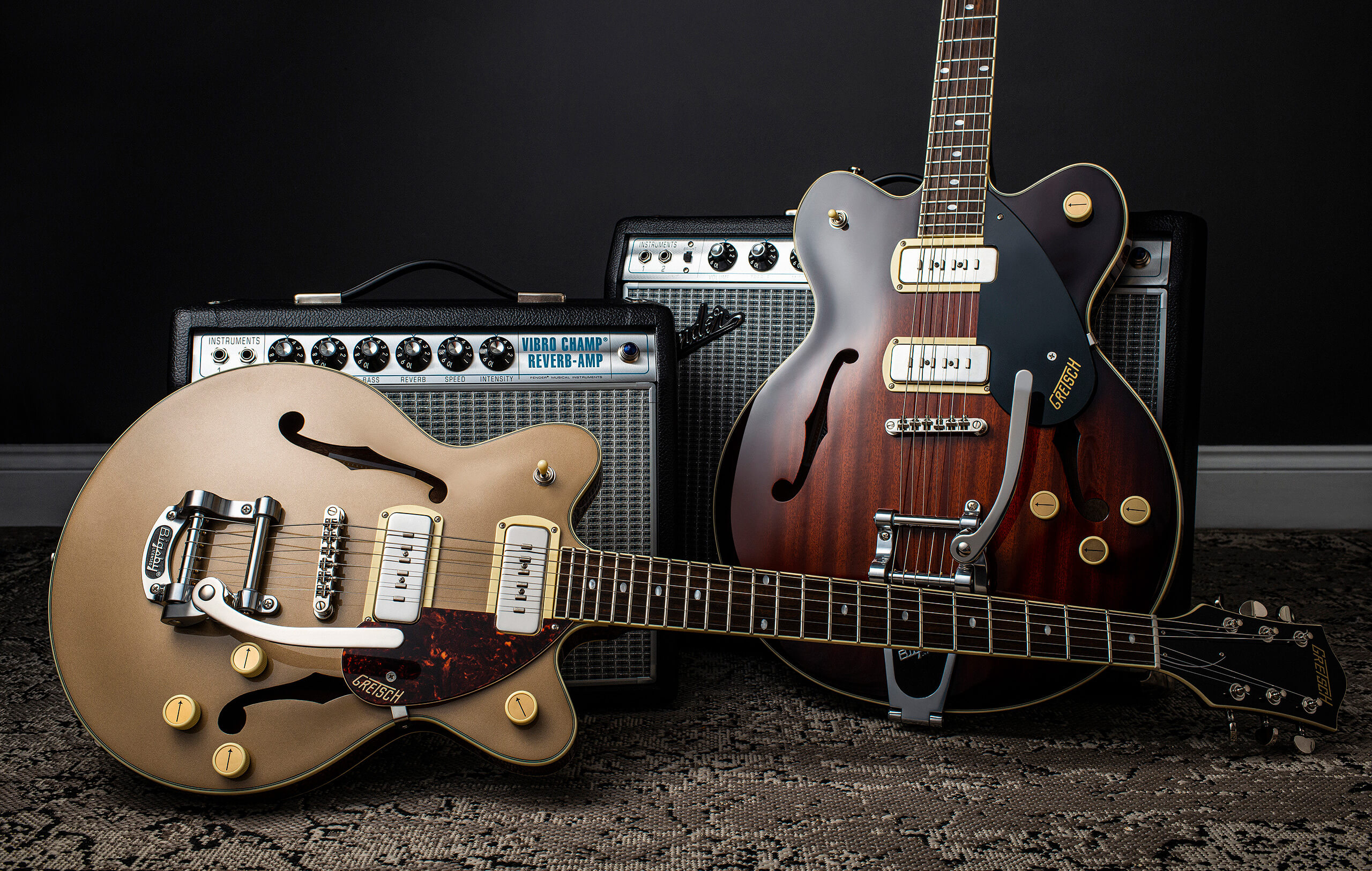 New to the tradition-busting Streamliner series, these two semi-hollow models with unfamiliar pickups are out to redefine the limits of what a Gretsch can do.

When is a Gretsch not a Gretsch? If your answer to that question is “When it isn’t fully hollow and doesn’t have extra-twangy pickups”, the brand’s new Streamliner Center Block models want to change your mind. It represents the latest move in Gretsch’s quest to cover a broader sonic palette – and it’s quite a bold one.

You’ll have guessed from the words ‘Center Block’ that these are semi-acoustics, and noticed from the pictures that they’re packing what appear to be P-90-style pickups with ‘staple’ polepieces. But as we’ll soon discover, that doesn’t tell the whole story.

The basics are simple enough. Both are double-cutaway semis with Bigsby vibratos (there are also cheaper hardtail versions) and the traditional Gretsch control layout: individual pickup volume knobs plus master volume and tone – all with cute arrow markers in this case – and a three-way switch up top. 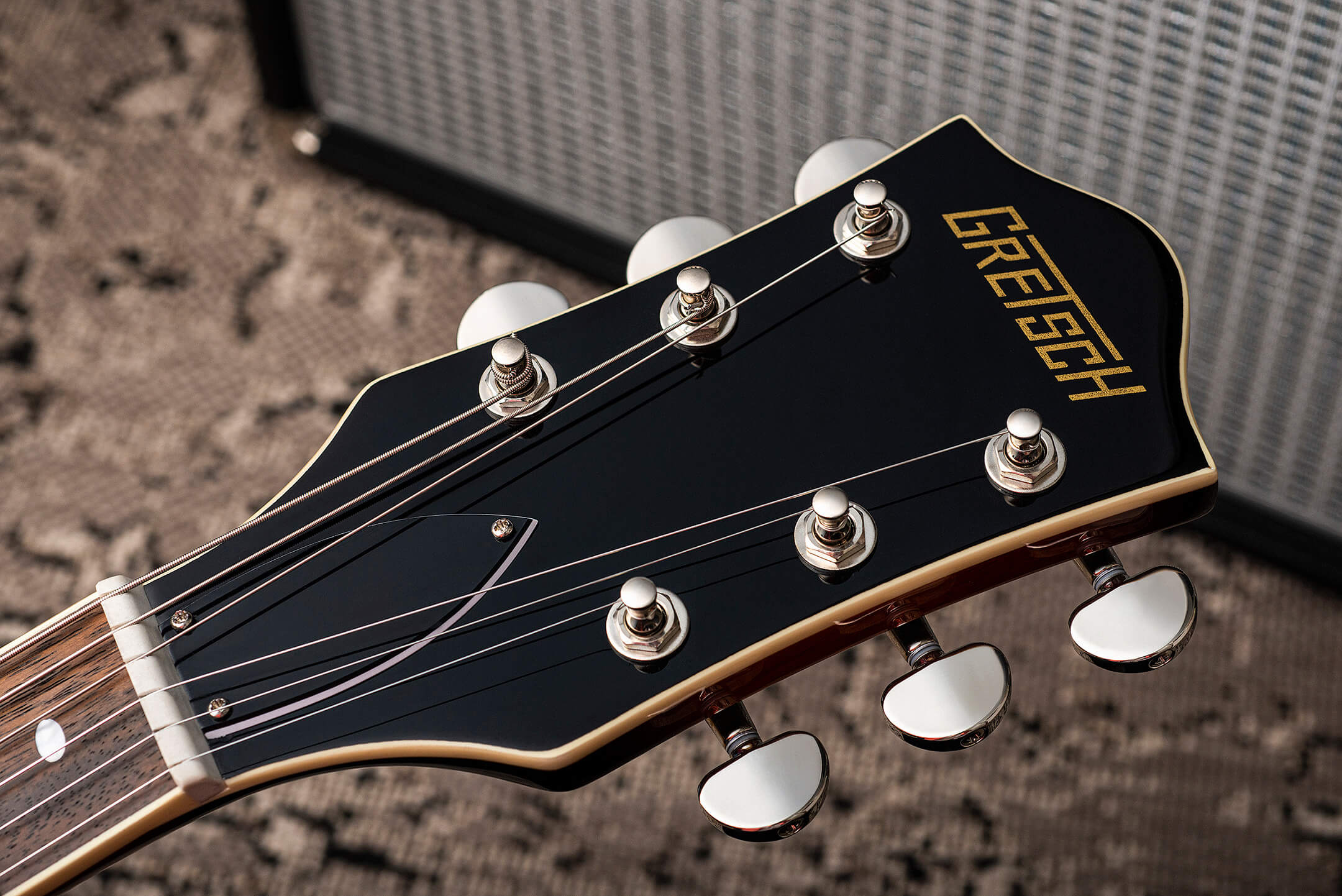 The bodies are bound in off-white with neat purfling, the necks have little oval fret markers and, if you ask us, there’s not a lot wrong with the large-bodied G2622T-P90 in terms of looks. The two-tone Junior, however, could be more divisive, as its quite drastically shrunken-down body makes all the hardware look disproportionately big – especially the thick plastic surrounds to the FideliSonic 90 pickups. And speaking of pickups… that’s where things get really interesting.

Of course, there’s nothing revolutionary about Gretsches with P-90s – Eddie Cochran fitted one in the neck position of his 6120 over 60 years ago – but this time they’re in both berths and, besides, these are no ordinary P-90s. The look of these all-new units is clearly inspired by Gibson’s staple pickups, generally known as a brighter-toned option, but there’s no reason to assume they’ll sound that way. 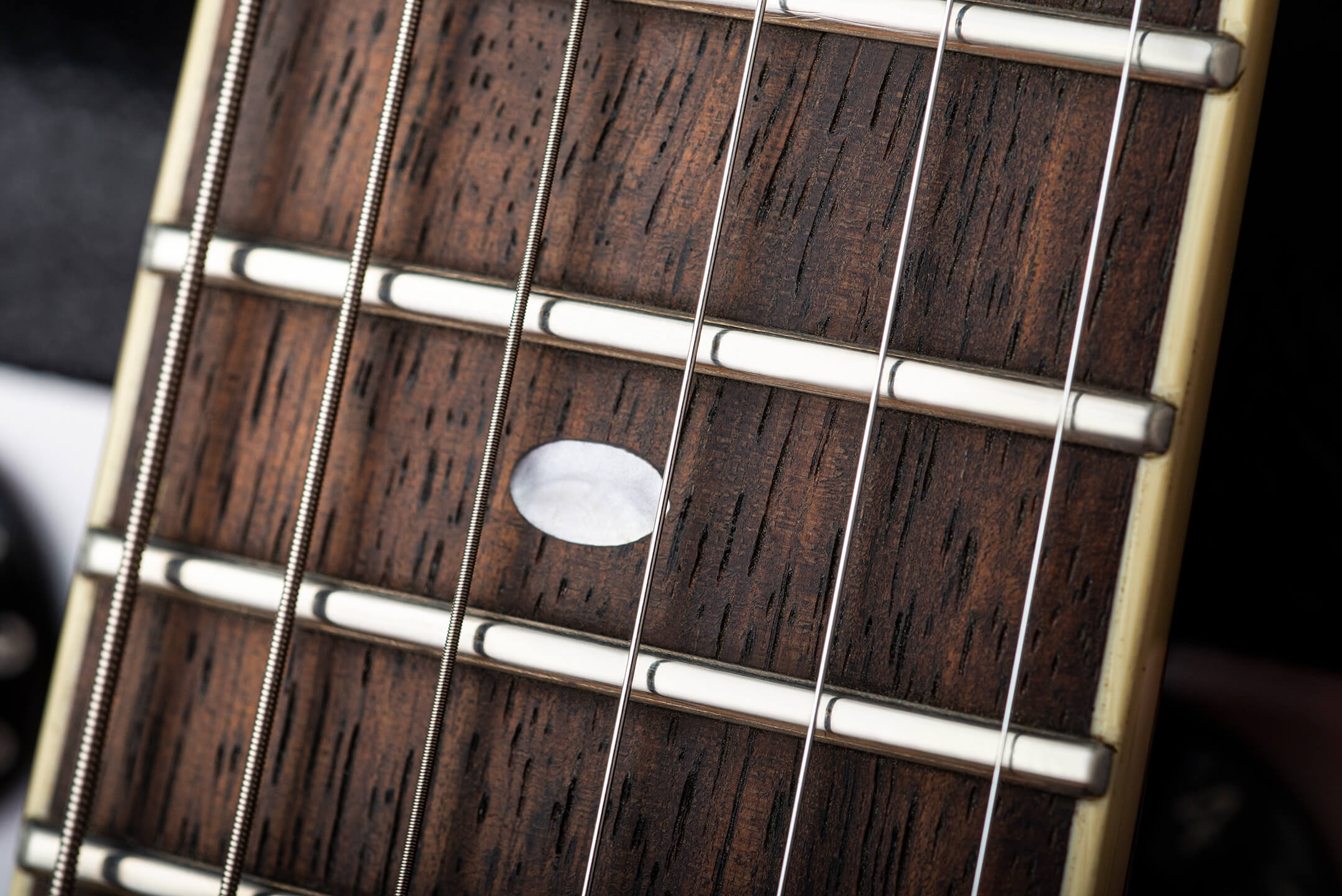 Both our review guitars seem well made overall, with good neck joins and tidy binding throughout. The G2622T earns one small black mark for a misaligned arrow on one of the volume knobs; the G2655T gets one for some slightly scruffy finishing around the lower f-hole, and another for a painfully sharp-cornered nut. 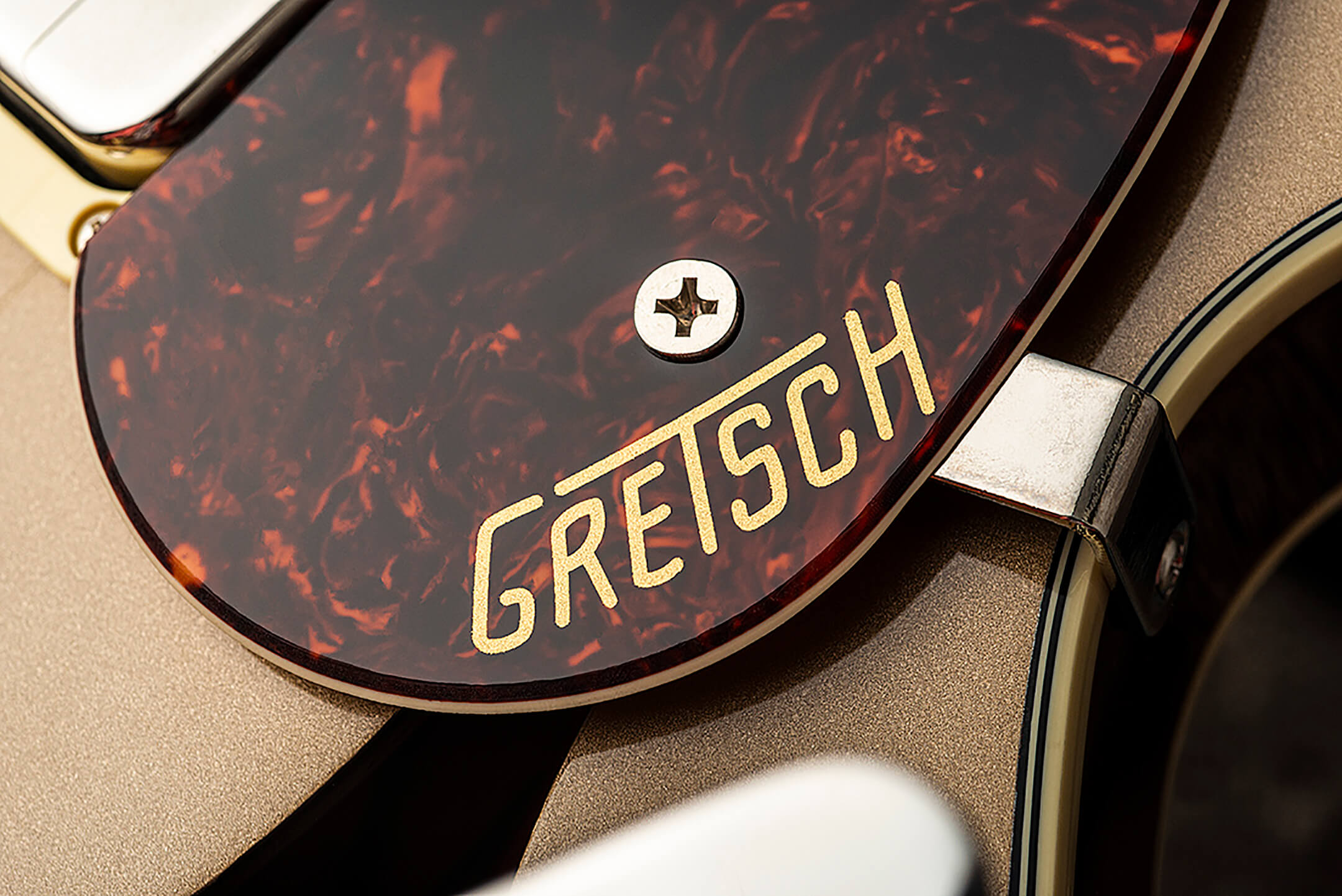 These two instruments are identical in every specification except body shape and Bigsby type. It’s no surprise, then, that their acoustic voices are broadly similar, at least in the top end, the main difference being that the bigger guitar has much more bloom in the lower frequencies. The other immediately obvious difference is that, while the full-size model is reasonably well balanced on the strap, the sawn-off Junior is much more neck-heavy.

First up for amplification is the large-bodied G2622T… and much as we love wanging away on a Bigsby, the B70 fitted to this guitar feels ever so slightly anomalous. Why? Because its fundamental voice is so thick and buttery that it feels more like a jazzbox than a rockabilly twanger – and we don’t just mean on the neck pickup. 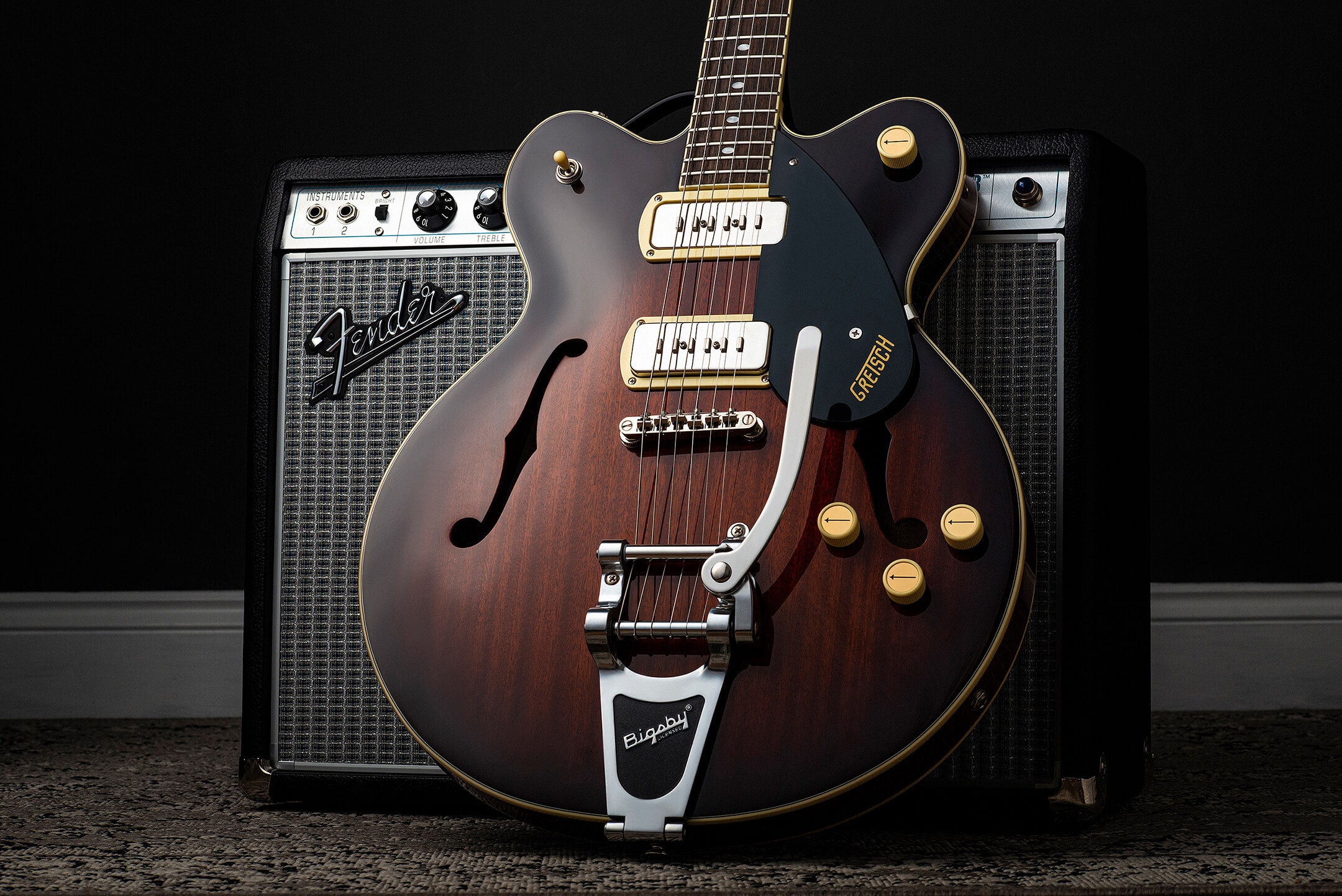 There is a beautifully quacky quality to the upper mids – these are P-90s alright, with that distinctive cheeky-but-firm attack, the sonic equivalent of being slapped with a cardboard fish – but even with the switch whacked to the back it’s a darkly woody tone. Does this still count as ‘twang’? Possibly, but it’s certainly not our usual flavour. This is probably down most of all to the FideliSonic 90 design, but maybe also to the fact that the bridge pickup has been placed a good inch or so away from the saddles, well out of the zingy zone.

The combination of solidity and snap is addictive in its own way – it’s smooth and fluffy rather than muffled, with plenty of responsiveness to changes in picking strength. The three pickup settings give three variants on the same theme, with added cluck in the middle position and more than ample warmth at the front. 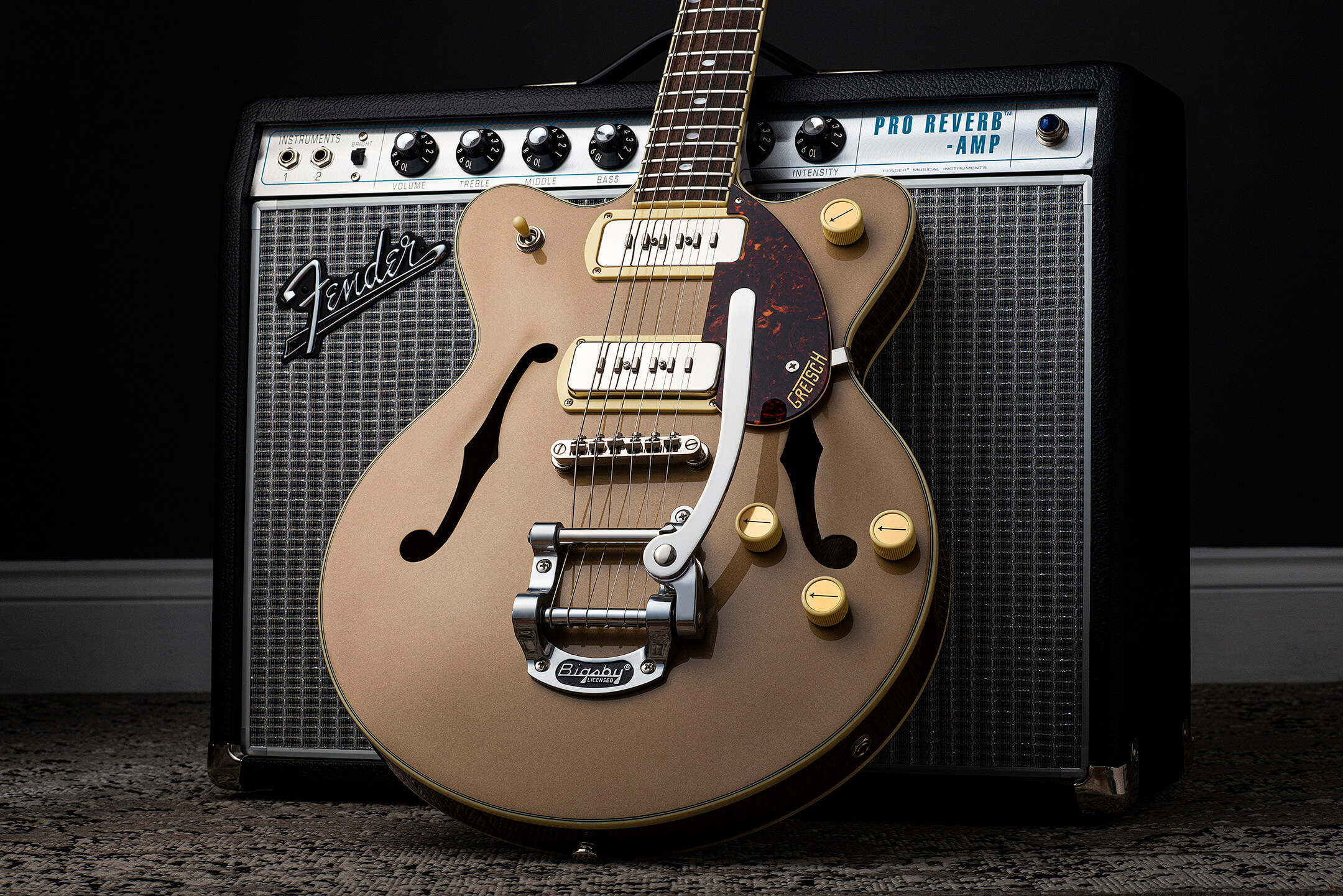 A fairly wide and flat neck with low-ish frets makes it feel wonderfully slick for lead runs, the only snag being the pickguard: as it’s been positioned over the neck pickup surround, it’s very close to the high E string and can get in the way of the right hand unless you’re a very disciplined picker. You can always remove it, of course.

These pickups are no less noisy than traditional P-90s, but they can handle relatively high levels of gain just fine as long as you don’t need biting treble and don’t mind slightly mushy chords. It is a big body but the centre-block helps to keep things under control – although there’s certainly feedback there if you want it, opening up all kinds of fun with the Bigsby. 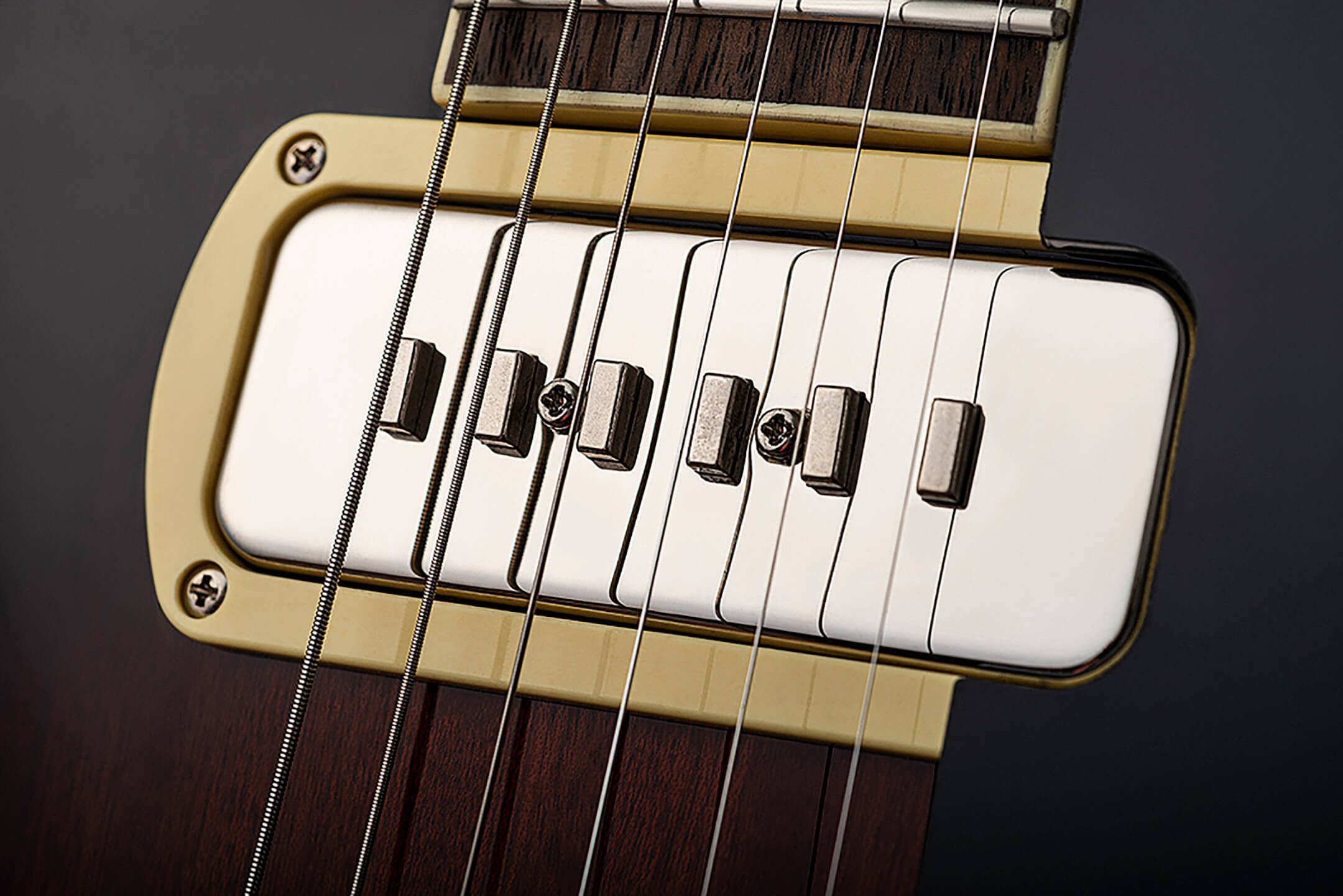 The first benefit of the Junior model’s scaled-down design is that the arm of the Bigsby B50 is closer to the pickups and therefore easier to grab while mid-widdle. Like the B70 on its sibling, it does its gently wobbly job without issues and stays in tune pretty well. There is a bit less feedback to play with here, though – a natural side-effect of this guitar’s tighter, less swirly tone.

It obviously doesn’t sound as ‘big’ as its full-size sibling, then, but it’s no less of a charmer. Overdriven chords have more clarity now, but that’s because of the low-end content that’s been taken out rather than any added treble: played clean it has a similar tonal profile, just with more immediacy and less fullness. 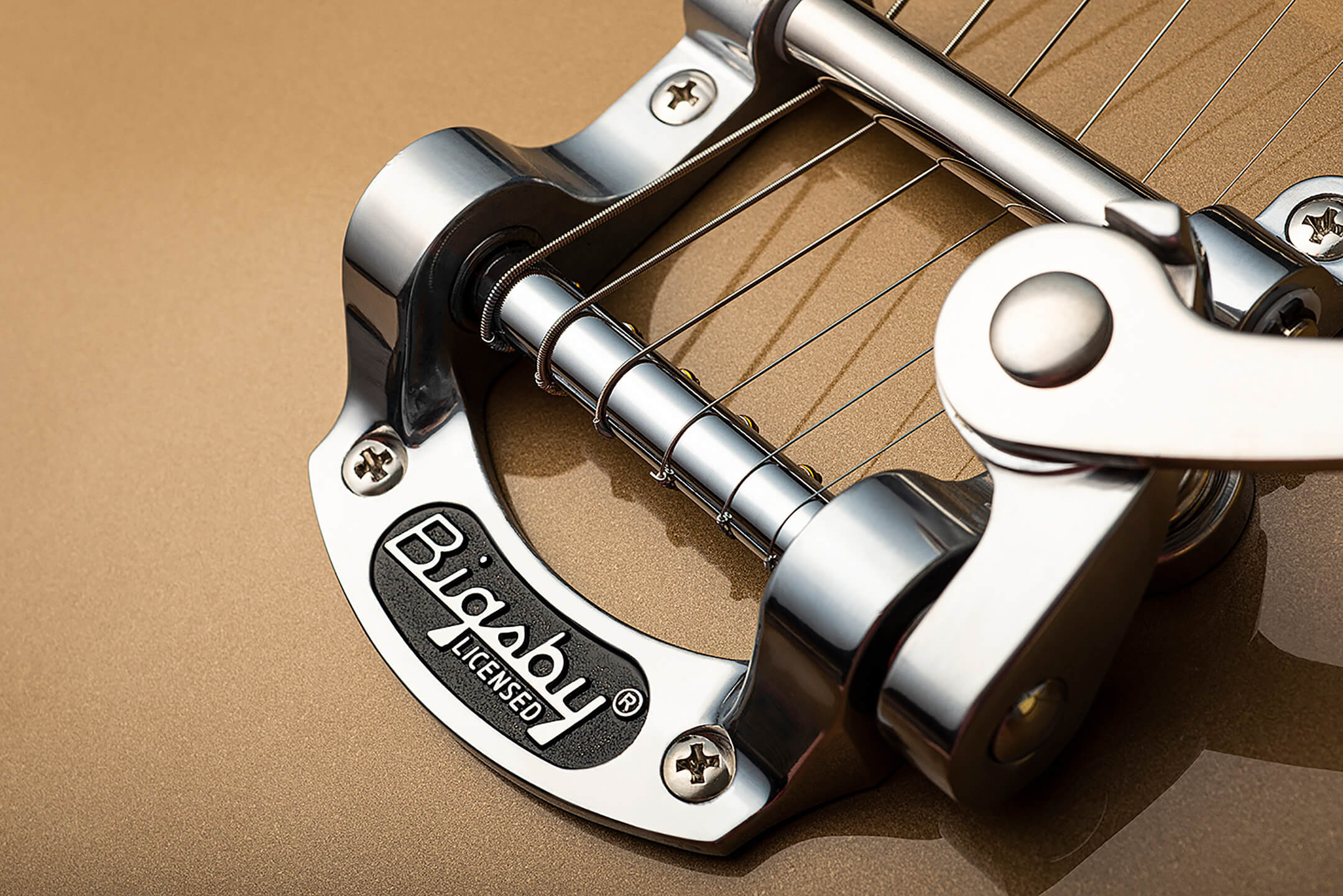 Arpeggios in the middle position sound just as sweet but more pure and perky; it’s surprising how much more lively this guitar feels just because there’s less wood and air involved. Jazzy stuff with the neck pickup loses the low-end ‘whump’ of the G2622T but some players might be quite happy about that. We’re getting strong vibes of the Epiphone Wildkat here – which is perhaps no surprise, as that underrated guitar is also a small-bodied semi with P-90s and a Bigsby.

Like the G5622 model we reviewed recently, these semi-hollow guitars are pushing the boundaries of what the company still calls ‘that great Gretsch sound’… but with those FideliSonic 90s pushing it so much further in the direction of mellow soulfulness, only you can decide if you’re willing to follow. 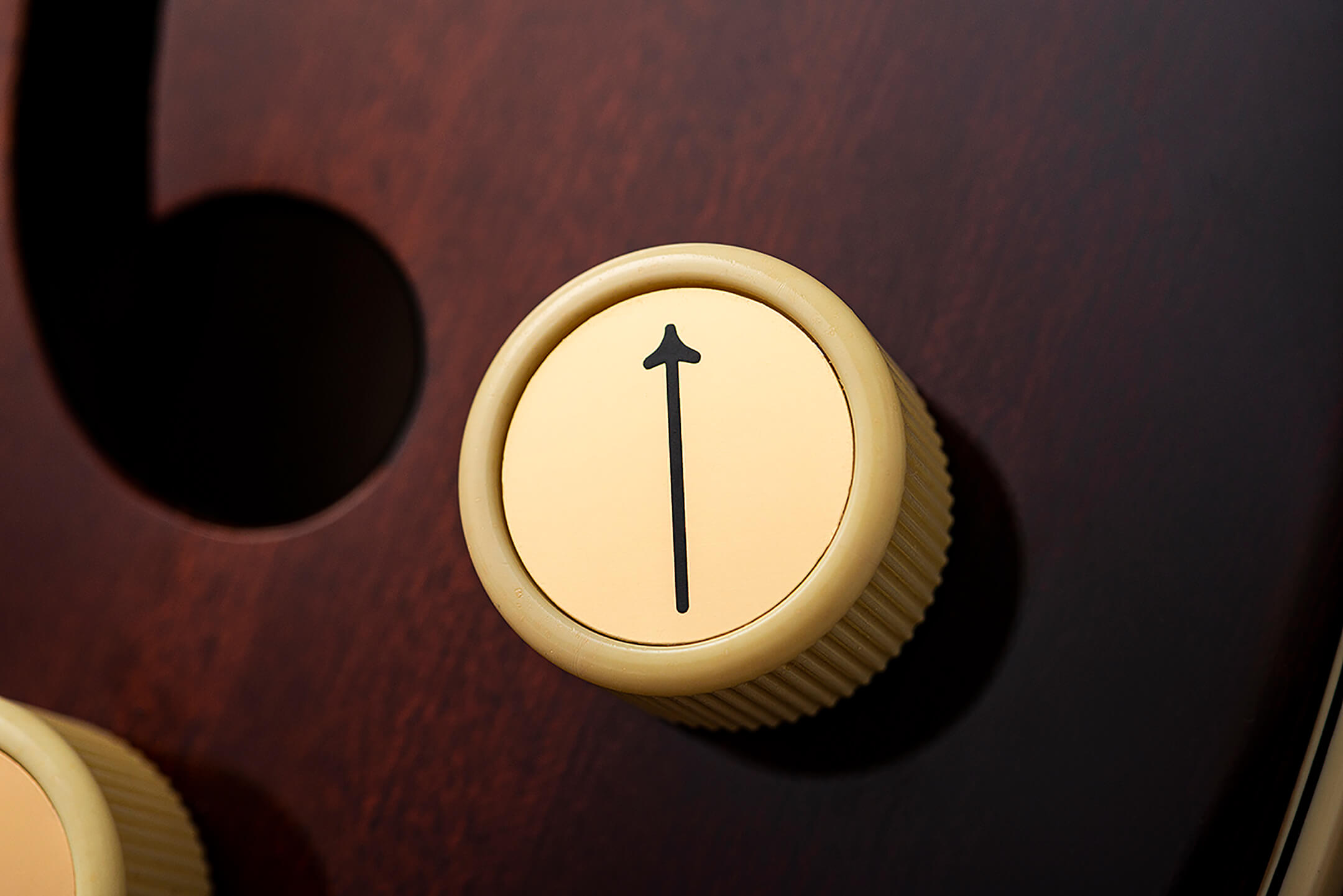