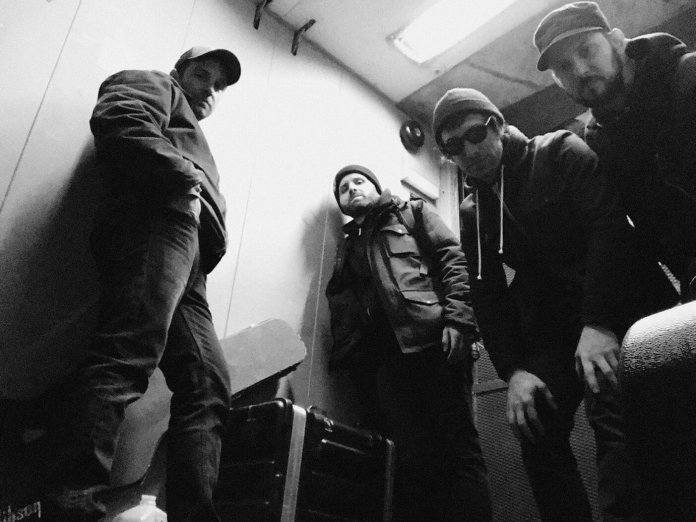 On 28 March 2018, Cave In’s longtime bassist Caleb Scofield was killed in a car accident in New Hampshire. He was 39.

At the time, the band were in the midst of recording their sixth studio album. After overcoming the initial shock and grief, they returned to complete the record, with Converge’s Nate Newton filling in on bass. Scofield is featured on all nine of the album’s tracks, but the most harrowing is the opener, Final Transmission, which features a voice memo left by the late bassist.

We recently caught up with the group’s guitarists Stephen Brodsky and Adam McGrath to talk about how they’ve been dealing with the loss of their friend, Scofield’s creative influence on the new record and how it feels to have completed it.

Final Transmission is an album with an emotional story, given Caleb’s death. How have you and the rest of the band been dealing with it?

Adam McGrath: It’s certainly been a whole new set of heavy emotions releasing the music into the world. However, throughout the process, I have felt so lucky to have the recorded material with Caleb and despite the awful circumstances I remain very proud of our work together.

Stephen Brodsky: Putting together Final Transmission is one way we’ve dealt with this new reality. Doing so allowed me, [John-Robert Conners] and Adam to spend time together. It also got us to spend time with Caleb, in a way, because he played on all the tracks we decided to include on the album.

Can you give us a little more insight into what the recording process was like?

AM: All of the material were live demos recorded in the practice space with no intention of release. We used two separate digital 4-track recorders strategically placed around the room. Some of the sessions, drums had their own recording set up. Steve would later sync up all the tracks and performances from the different devices on Pro Tools.

SB: The idea was to eventually go into a studio, so naturally the sound quality on these recordings tends to vary a bit. The arc of the album reflects it, too – [the] first five full-band compositions are the most complex in terms of tracking and fidelity, then the setup gradually simplifies.

How much of the lyrics and vocals were completed after Caleb’s passing? Was it cathartic to channel your grief into the lyrics?

SB: Actually, the only song that was lyrically completed after March 2018 is Shake My Blood. We’re pretty sure that Caleb’s lyrics for All Illusion were written around the last time we saw him. Shake My Blood is about grief and how debilitating it can be, from our day-to-day to the overall picture of life. It’s a call to action, to keep moving forward – “I need to shake my blood”.

We hear that Caleb was integral to the direction for this album. What was the initial vision for the record, and where did it end up?

AM: There was just a lot of trial and error via discussions and demo sharing over long periods of time, seeing what sorts of material we all were stoked to work on and gravitated towards. Caleb certainly articulated best that we should stick to the material that made us unique as a band and differentiated us from our peers. We were all onboard with this vision by the end of 2017, heading into 2018.

SB: Caleb seemed to dig the more space-rock and trippy sounding stuff that we had thrown into the pot. I’m happy that we were at least able to flesh out fairly crystallised versions of that mission statement, even in raw demo form.

How does it feel to have completed this album?

AM: For me, personally, it’s a step moving forward in trying to get through, process and understand this world without Caleb. It’s never easy. I’m also so happy we have another opportunity with this record to help the Scofield family with 50 per cent of the proceeds going to them.

SB: It’s a strange feeling. There is a sense of accomplishment, but also a harrowing sense of void and loss. Above all, I have a new appreciation for the good people who helped see [the album] through, and all the fans supporting it.

What kind of tunings did you use on the album?

AM: Many tunings were used on Final Transmission. The tuning on Strange Reflection is BEBEBE which I got turned onto reading about Nick Drake. Songs like All Illusion and Shake My Blood are in a tuning Caleb came up with that we called “Secret C”: BF#C#F#A#C#.

How did you achieve your tone for this album?

Let’s dive a little deeper into gear for a bit. Adam, what are your main guitars now? Do you have a favourite?

AM: My favourites these days are my white Gibson Les Paul Studio and my MIM Fender Jazzmaster. Two completely different animals but both help me achieve my sonic goals! Les Paul for solid riff rock and Jazzmaster for wild, expressive freak rock.

We hear you have a Les Paul that’s a family heirloom. Can you tell us more about it?

SB: There are actually two! I learned how to play on a 1965 Harmony Jaguar that my dad also learned on as a kid. In 1993, he splurged on a brand-new Gibson Les Paul Studio from Daddy’s Junky Music. I would often sneak away with it to play shows or to record. Eventually my dad gifted me the guitar once he realised I was spending more time with it than he was.

How did you first get started on guitar?

AM: I loved all the KISS, grunge and metal that I was exposed to in my suburban bubble and was so interested in learning how to play music. My mother got me guitar lessons at DA BIDER in the Methuen Mall.

SB: I took private lessons from a guy named John Zaikowski who lived in the Merrimack Valley. And my dad also helped me figure out the chords to GNR’s Patience.

Do you remember your first guitar? Do you still have it?

AM: My first guitar was a Yamaha FG 335 my mother got me at the mall. I still have it to this day and had a greater appreciation for Yamaha acoustics once I saw Elliott Smith playing one many years ago.

What kind of amps do you prefer?

AM: To me, nothing sounds better ringing out chords on a Marshall JCM 800. The clarity and crunching mids! It’s such a classic tone and sound that never gets old. Pure AC/DC rock ’n’ roll amp.

SB: I’ve used a 1974 Sunn Model T for several years now. It’s grizzly-sounding as hell. It also looks like the head of an old-timey robot when placed on top of a full stack.

You guys are fans of Boss pedals, yeah? Which ones do you use and what draws you to them?

AM: I love Boss pedals because they are built like tanks and sound great. I use a Boss Chorus Ensemble, Boss Tremolo, Boss Space Echo, Boss Harmonist etc.

SB: It’s no secret that I’m a huge fan of the Boss PS-3. That pedal contains a sound that I’ve heard in my head since I first started playing music. And visually, I think Boss is like the Andy Warhol of the pedal world.

Final Transmission is out now via Hydra Head Records.