“The electric guitar was my first love”: Chrissie Hynde on Telecasters, the magic of bands, and the power of telling people to stick it

The Pretenders’ legend on why she only ever wanted to play rhythm, how she’s “won by default” with her brand new signature Fender Telecaster, and why she very nearly talked herself out of the whole thing…

Chrissie Hynde’s career has always been about rough and smooth: gut-check attitude versus rock ’n’ roll romanticism. She is a pragmatist who is also devoted to the ineffable power of music, its influence bleeding beyond the borders of her teenage AM radio obsession and into a gnawing need to lead a band and answer in her own indelible voice.

For the past 40 years the Pretenders’ music has been a fixture in a lot of lives, with Hynde’s punked-up take on classic rock belting from speakers, lip curled. The band’s debut LP, released as 1979 ticked over into 1980, laid out her philosophy: the collective is stronger than the individual, and any great song is a team sport. “I’m not a solo artist,” she told Rolling Stone last year. “My position in any band that I’ve been in is to set the guitar player up to make a goal.”

“I think rock bands are all about electric guitars,” she says now, when that line is put to her again. “The electric guitar was my first love. Generally, the singer is one thing – the Rolling Stones are a great example. Everyone’s looking at Mick Jagger, but really everyone loves Keith Richards because Keith’s the guitar player. But when Keith goes over to the microphone and does a song, halfway through the place clears out and goes to the bar to get a drink. I love Mick Jagger, and I want him to play guitar, but I don’t want to see him play guitar. I want to see him be Mick Jagger. We get used to seeing our heroes do what they do best.” 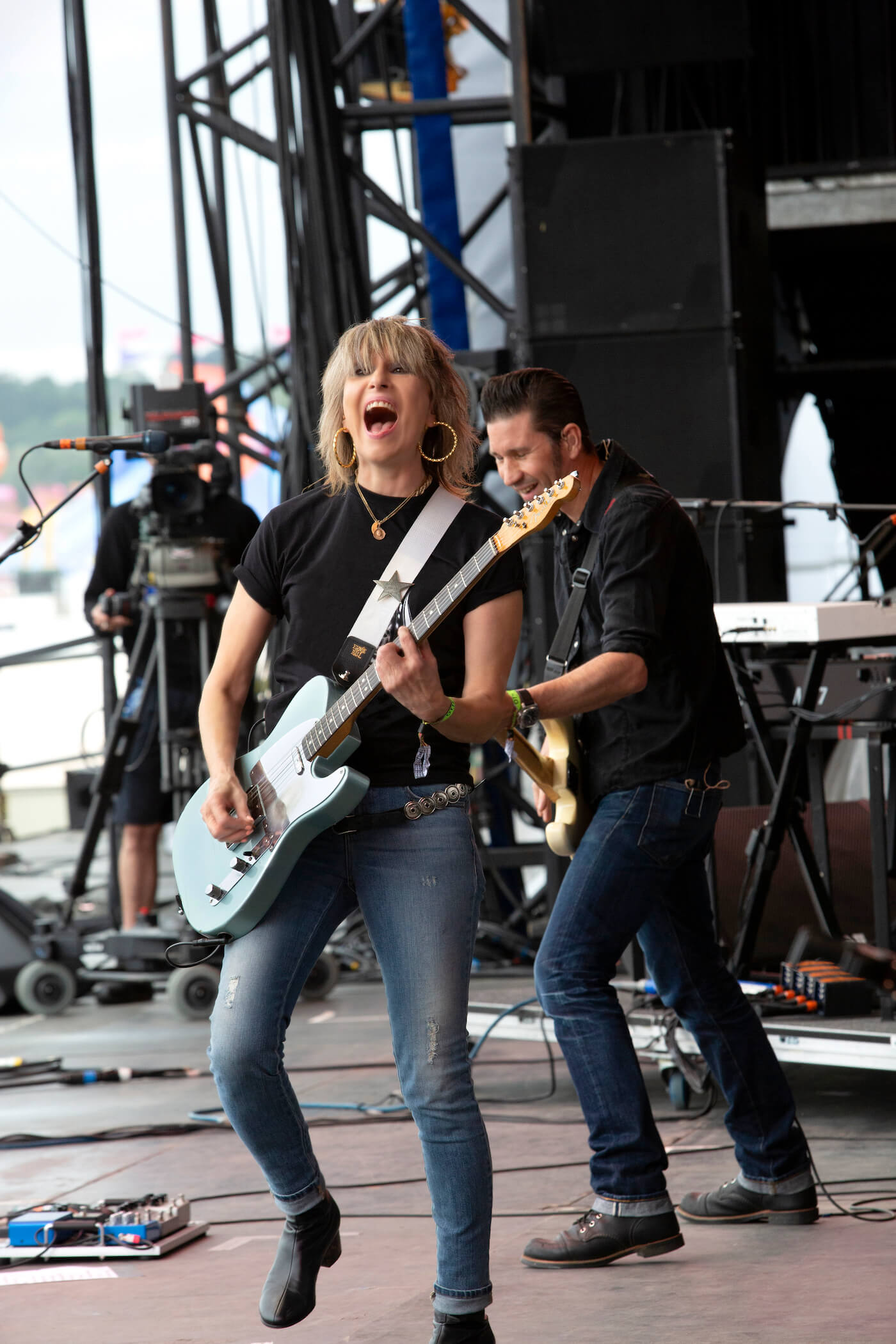 Rhythm’s gonna get you

Hynde’s guitar style is rooted in the concrete rhythms of the pop and soul records she grew up on, with a lot of right hand propping up a series of Pretenders lead players headlined by the late James Honeyman-Scott, whose wiry, crisp melodies influenced everyone from Johnny Marr to Jeff Buckley. “I only wanted to be a rhythm player. I shouldn’t say ‘only’, that’s my favourite part of the song,” she says. “James Brown’s guitar player would play one figure throughout the whole song, and I love that. Some amazing songs are written around one chord, and everything builds around it. All the great bands had a strong rhythm guitar element.”

Hynde’s appetite for utility extends to her guitars. She’s no gear-head and prefers to view the instrument as a tool, as a means to an end creatively. “It’s like a pencil, you know?  I use the guitar for songwriting,” she says. “I love playing, but I don’t think of myself as a guitar player. The only time I think I can play is when I’m trying to show someone else who can’t. Then I’m like, ‘God, I’m fuckin’ great.’”

But that doesn’t mean that the sight of Hynde with a Telecaster cinched at her waist hasn’t become iconic. And, for much of her career it’s been one particular Telecaster: a 1965 model sprayed a shade of blue that’s always reminded her of a Corvette paint job. She picked it up at one of the legendary uptown stores in Manhattan (likely Manny’s, but she can’t remember for sure) and has played it for 39 years, alternating with what was probably her first Tele (bought on Denmark Street in London) and a gold glitter guitar she describes as a holdover from an “Urge Overkill phase.” 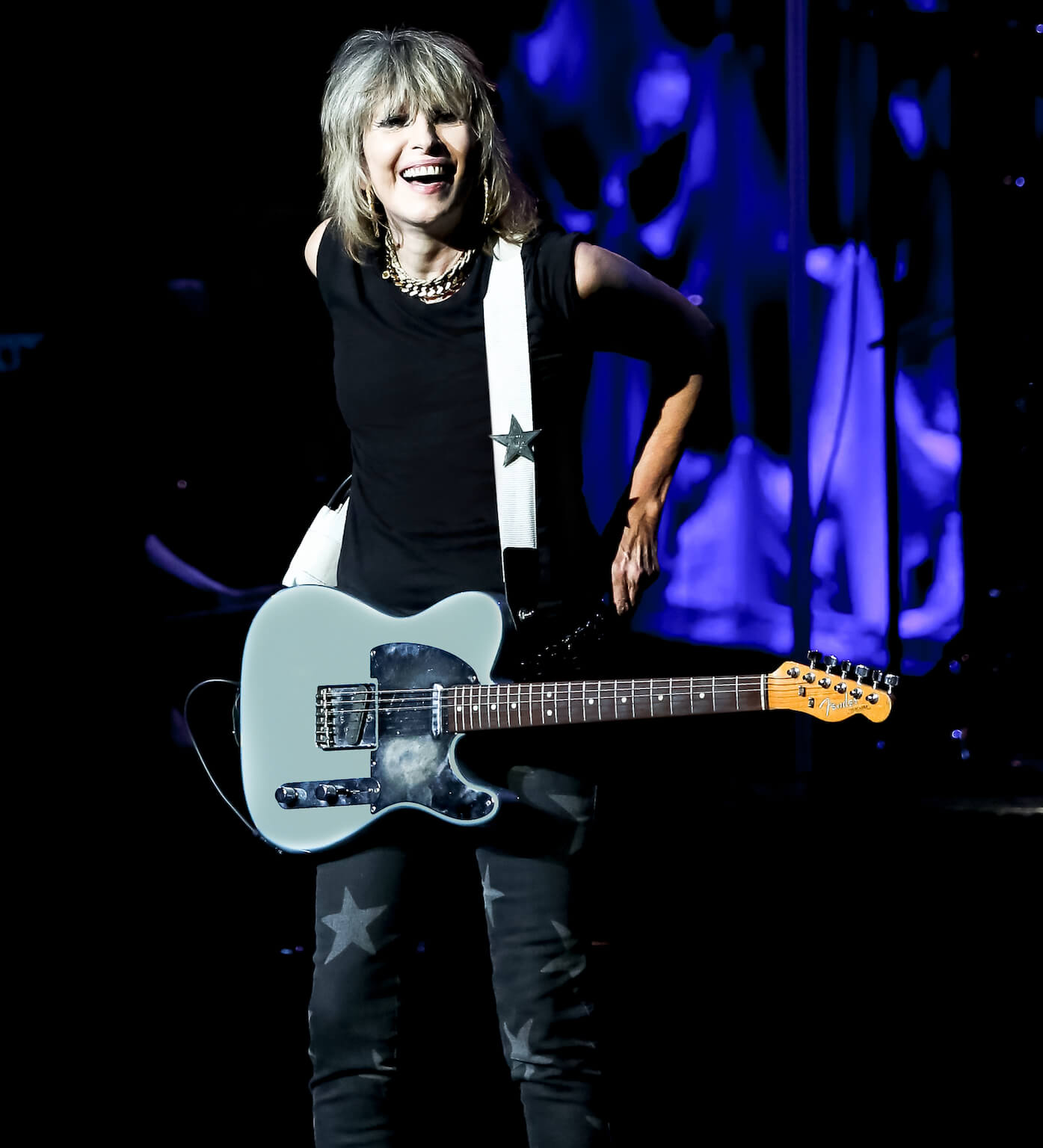 Now, that cherished blue guitar forms the basis of her signature Fender. The Chrissie Hynde Telecaster comprises an alder body, a maple neck and a rosewood fingerboard with a 7.25-inch radius, plus a chrome mirror pickguard. Alongside the standard Tele setup of a volume knob, a tone knob and three-way pickup selector are some retro-style 50s single-coil pickups “voiced to match Chrissie’s original set”. In one departure from the original, it’s fitted with locking tuners. “I’ve kind of won by default by getting this guitar made,” she says. “It took a long time for someone to talk me into it because I didn’t see why. My guitar tech said, ‘Well, it’ll encourage other people to get in bands’, and the word ‘band’ is what turned me on.”

“I don’t know when I got my first Tele, and I don’t know why,” she continues. “I think it was the white one that I still have. Mainly I just like the feel of it. I’m not technical, but I know when I like the sound, and it feels great. The first time I picked one up, I thought, ‘I’ll never be able to stand up for a half an hour with this.’ It seemed heavy. But now I can twirl it around like a baton. You just get very used to the weight, and they’re not as heavy as some guitars, which really take a lot of muscle just to hold them.”

Hynde was born in Akron, Ohio early in the autumn of 1951. In her teens she tuned in to anything cool and exciting emanating from her radio, roving from the Beatles and the Stones to Hendrix, BB King, Zappa and the Velvet Underground as FM signals broke into her life. She wanted out: adventure and music and bands. She eventually found that in London’s punk milieu in the late 70s, falling in with Lemmy, the Clash, the Pistols and assembling songs in squats and bedsits on an unamplified electric. “There was nothing else to do,” she says. “There was usually someone in the next room who I didn’t want to disturb. I’ve never had my own studio. That’s still pretty much how I do things.”

“I just wanted to play in a band,” she adds. “I didn’t really think it would happen. I was already too old, as far as I felt. I was maybe 24 or 25 years old. To me that was already too late. But other people were doing it. The New York Dolls were my age. So I thought ‘Fuck it, I’m doing it.’ What was I looking for? I was just desperate. I was trying to get in a band with anyone. That was me at the bus stop with my guitar, just waiting. I didn’t know what else to do.”

Hynde is tough. Always has been. There’s a brusqueness to her that’s part American birthright, part punk schooling, all her own. She has fought her way through male-dominated scene after male-dominated scene, but she has zero interest in being pinned down as a trailblazer, as a blueprint. “You just tell them to go fuck themselves. Problem solved,” she says when asked about female artists encountering pressure from industry dudes over their career goals or image.

“You’re not beholden to these clowns. You don’t owe them anything. I was offered deals to be a solo artist by good people. Jake Riviera said, ‘Do you want to be on Stiff?’ And I said, ‘Well, yeah, but wait until I get a band together.’ Nothing tempted me away, even a great offer like that from a great record company. I knew what I wanted was a band. I was going to hold out for that and if it didn’t happen then I’d just have to wait and see. I’m not saying I know better than someone else, but if a record company told me I had to dress a certain way, I’d tell the guy to go stick it.”

The Pretenders have orbited Hynde’s writing – and an almost unparalleled knack for a killer cover version – for decades, overcoming the loss of Honeyman-Scott and bassist Pete Farndon to drug overdoses following the release of the band’s second album. Since then, Hynde has regularly turned to outside voices and session players, including a high-profile tie-up with fellow Akron escapee Dan Auerbach on 2016’s Alone, but last year’s Hate for Sale felt like a homecoming of sorts. It featured founding drummer Martin Chambers for the first time since 2002’s Loose Screw, with Hynde playing off lead guitarist James Walbourne, a Londoner with an ear for a serrated rock riff.

“When I first met James in Marylebone, I said, ‘Okay, we’ll have a rehearsal.’ As soon as I saw him standing there holding the guitar, I knew he was going to be in,” Hynde says. “I threw out I’ll Stand By You, and I knew immediately. As soon as I saw him play a ballad I thought, ‘This guy is a rock guitar player that I can rely on.’ And I was right. When you see a guy who plays rock ‘n’ roll guitar, a real player, walking down the street, if you’ve never met them or seen them before, you already know they’re a guitar player. They don’t look like other people, the real guitar heroes.”

Hynde might not consider herself part of that particular group, but plenty of people will. There is a healthy self-deprecating streak at work all the time, even as she has dodged the heritage act scrapheap by continuing to make records that require our attention. Her songs have been covered by everyone from Girls Aloud to Jawbreaker, but to hear her tell it that’s probably just because they’ve got good bones. “I like that three-to-four-minute format and radio, but I don’t know that there was anything particularly original there, except I guess my voice and songs,” she says. “But everyone’s voice and songs are original to them.”

Find out more about the Fender Chrissie Hynde Telecaster at fender.com.