by Huw Baines
Explosions In The Sky
#Artist#Rock
Features

With two reissues to mark 20 years of atmospheric excellence from the Texan post-rock aristocrats, we sit down with guitarist Michael James to look back at their seismic albums How Strange, Innocence and The Rescue. 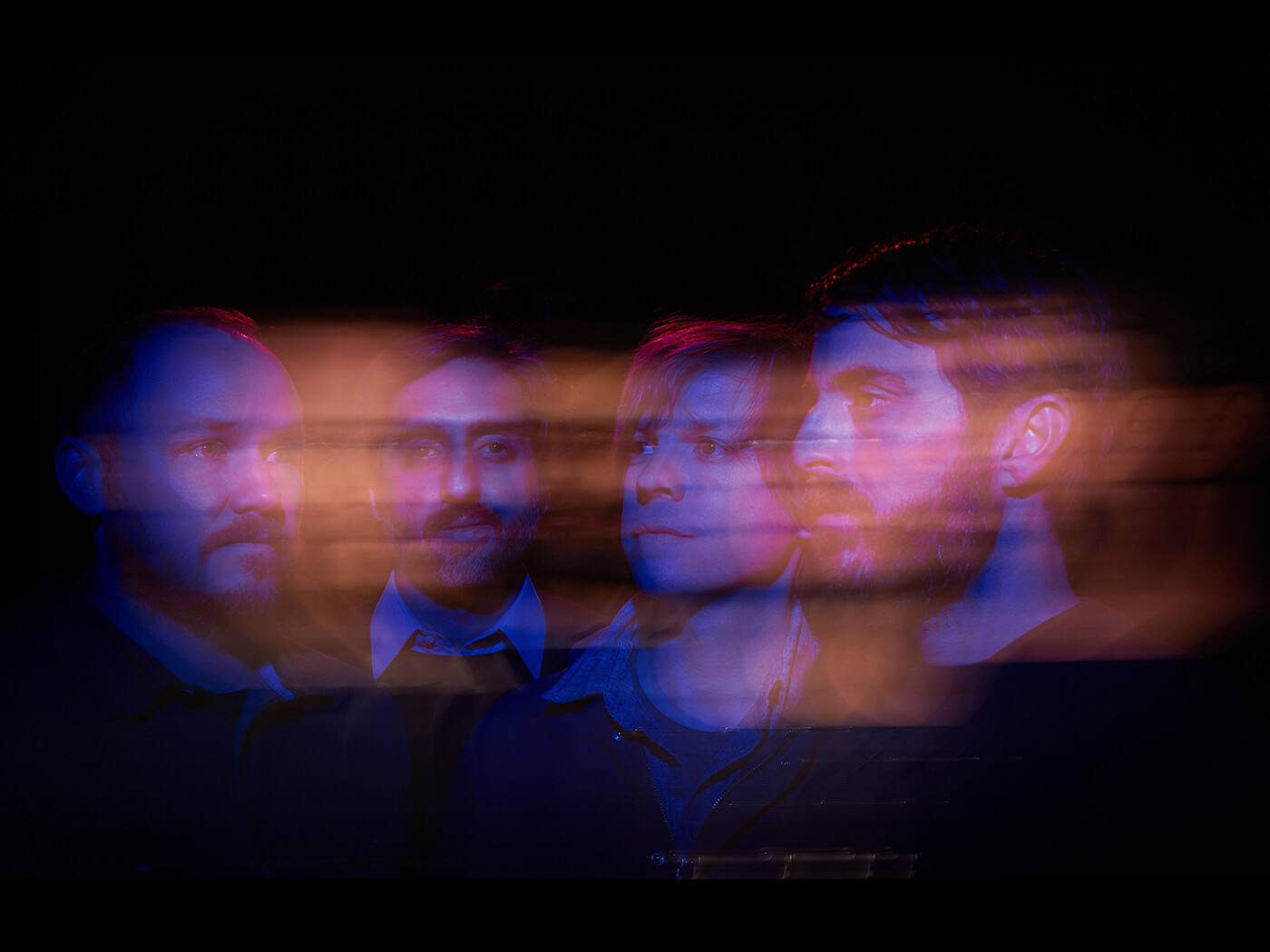 Let’s play post-rock bingo: is something sweeping, or epic? Is it ethereal? Is it cinematic? Across a career that now spans two decades, Explosions In The Sky have made music that fits all of these descriptors, but they’ve done so in a way that has consistently moved beyond cliché. Thanks to a discography encompassing genre classics, hundreds of sold-out shows and the perhaps inevitable move into soundtrack work, they have scored important times in a lot of lives.

20 years after changing their name from Breaker Morant, the band are in a prime spot to evaluate where they came from on their way to deciding where to go next. They have a pair of reissues – of their 2000 debut How Strange, Innocence and the hard-to-find curio The Rescue from 2005 – to help them do that, alongside some huge anniversary dates across the US and into Europe.

Right now, Explosions In The Sky are a band with almost unmatched scope and appreciation for space – their 2016 album The Wilderness found them using loops, synth patches and moments of piercing calm to deconstruct their own sound. With the benefit of hindsight, that makes How Strange, Innocence a fascinating time capsule of fledgling musicians figuring things out on the fly – and its fraught mix of spidery guitars and rattling dissonance comes on like Slint playing hacky sack with American Football.

“We were kids who hadn’t spent much time in a studio before,” guitarist and bassist Michael James tells us. “We had way more excitement than talent, but we were learning fast. We didn’t know what we were doing but our hopes for the experience were to make the greatest album known to humanity, in two days. While we didn’t do that, we had a lot of fun, and learned a huge amount about recording an album.”

When James describes the band as kids, he’s not being reductive. Back in 2000 he, drummer Chris Hrasky and fellow guitarists Munaf Rayani and Mark Smith were teenagers kicking around in Austin, Texas. The two January days they spent tracking were followed by one for mixing and one for mastering. The end result was 300 CD-R copies and a foot in the door – all in all, they had been a band for under a year.

“We had no doubts about our abilities to make an album, because it never occurred to us that we couldn’t,” James says. “We had written these songs and we loved them so much that it seemed inevitable that other people would, too. There was a momentum that seemed to sweep us along. We wrote these songs, now what? Find a club that will let us play them in front of people. Okay, now what? Scrape together enough money for a few days in a studio to record them. Okay, now what? Find a way to go on tour. There seemed to be a path laid out that we could follow.”

They describe it as a “young record” and joke that at several points in the past they considered buying up every copy and burning them. But there is an element of deflection in both statements – How Strange, Innocence is far from the finished article but it contains an arresting set of songs.

From A Song For Our Fathers’ disconnected leads to the squalling noise of Time Stops, it possesses moments of wonder and giddy excitement, stemming in part from the music they were scarfing down as they learned their craft: Mogwai, Bardo Pond, Radiohead, My Bloody Valentine. The idea was to sound big.

But even at this early stage they couldn’t avoid some of the flourishes that would send them over the top on 2003’s The Earth Is Not A Cold Dead Place – there is that tension created by the patience of some of the playing and the foresight to peel back layers in order to let a melody land. In its best moments, it thrives on concrete motifs and precise aims. In 2019, are the band impressed by what those kids came up with?

“I don’t think impressed is the right word, but I’m able to see the good stuff shine through now that we’re 20 years removed from making it,” James says. “When we record, we spend so much time putting every detail under the microscope that I can’t really step away from it to see it as a whole. I only see the mistakes, or things that didn’t quite work out right. But time and distance help with that. I see the creativity and excitement in those songs, and it definitely makes me smile.”

Creativity and excitement are certainly on the guestlist, but one transfixing element of Explosions In The Sky’s music is conspicuous by its absence. Fans of their more mature writing will perhaps recoil at how bone dry and unfiltered the guitars are: the band’s love affair with pedals (notably the Boss RV-3 reverb, which might as well be their signature bit of kit) wouldn’t begin until later.

Album one was recorded in a basic guitar, bass and drums setup – James, Rayani and Smith had a distortion pedal and delay each. “The RV-3 came after How Strange…,” James says. “We hadn’t learned the magic of reverb yet. Our pedal game is much improved these days, but I think learning to write songs without them kept us from relying too heavily on them as we progressed.”

Gear-wise, Explosions In The Sky are not dilettantes – they’ve stuck with the RV-3 because later iterations sapped what they liked about the pedal, while their guitar choices are similarly defined by loyalty and understanding. James has been playing Ibanez Talmans since he was 16, Smith has rarely strayed from the Fender Toronados he got into post-How Strange, Innocence. Rayani is at home with Strats and later his Forshage Custom S-types. If something new is allowed to darken their doorway, it’s because it offers something these well-worn favourites cannot.

“I think we all would experiment with new pedals during the writing process and it was usually a case of finding something to achieve a sound we hadn’t made before,” James says. “Pedals can be a big part of writing, but can also be the spice that you add after something is written. I still get a giddy feeling unboxing a new pedal and spending hours trying to find that special sound that I haven’t heard before.”

As Explosions In The Sky have progressed as composers and musicians, their music has followed suit. The second of the reissues is testament to that evolution. Initially released as a mail-order only CD in 2005, The Rescue is an experimental beast from a fascinating time. After touring The Earth Is Not A Cold Dead Place and making their first moves in the world of soundtracks with Friday Night Lights, the quartet regrouped with a challenge that undid their carefully curated methods.

They decided to compose, rehearse, record and mix a new song every day for eight days and the results were a pleasant surprise: melodically rich, bold and bright. On Day Six, the guitars veer towards post-rock triumphalism only to be dragged back to earth – even with the clock ticking there’s time for some old tricks. “The whole idea of The Rescue was to stop overthinking,” James says.

“We were in a little bit of a rut at the time, and we just couldn’t finish anything because we’d analyse everything to death. We decided to take off any creative restraints by adding the time restraint. A song a day, no matter what. No saying no, no criticising, just making music. We had never worked that way before, we had always agonised over details and we all found it incredibly freeing and fun.”

Each twist in the band’s tale feels like a weight being thrown off. There’s the initial development from rough beginnings to polished outfit, then the leap into long-form film work. There’s the introduction of synths and triggers to fill out their palette. All of these developments have eventually fed into Explosions In The Sky’s DNA – their identity has altered without being corrupted.

While James concedes that The Wilderness, expansive and florid in its scope, is his favourite of their records, he is very much the proud parent when it comes to the band’s discography. How Strange, Innocence and The Rescue are fine choices to mark 20 years, because they’re outliers – they show vulnerability and searching creativity more than a machine turning over. Nothing drives that home like the lessons James prizes most from the early days.

“I learned how important tuning your guitar is,” he says. “I swear, the most valuable pedal in my chain is my tuner. Every recording from those first years is marred by hilariously out-of-tune guitars. But I also learned about feel and touch. As a rock musician, I just wanted to thrash and bang on my bass or guitar. Listening to recordings of shows or practices started to show me that isn’t the best sound all the time, and that the way you play can just as important as what you play.”

How Strange, Innocence and The Rescue are out on 16 August through Temporary Residence Ltd. Explosions In The Sky’s 20th-anniversary tour begins on 11 September in Mesa, Arizona.

Explosions In The Sky
#Artist#Rock