Slash tells us about his Gibson Collection, playing with his friends and the new GN’R album

The Cat In The Hat talks developing the new range, his relationship with Gibson, and how the dynamic of the company has changed since it emerged from bankruptcy. 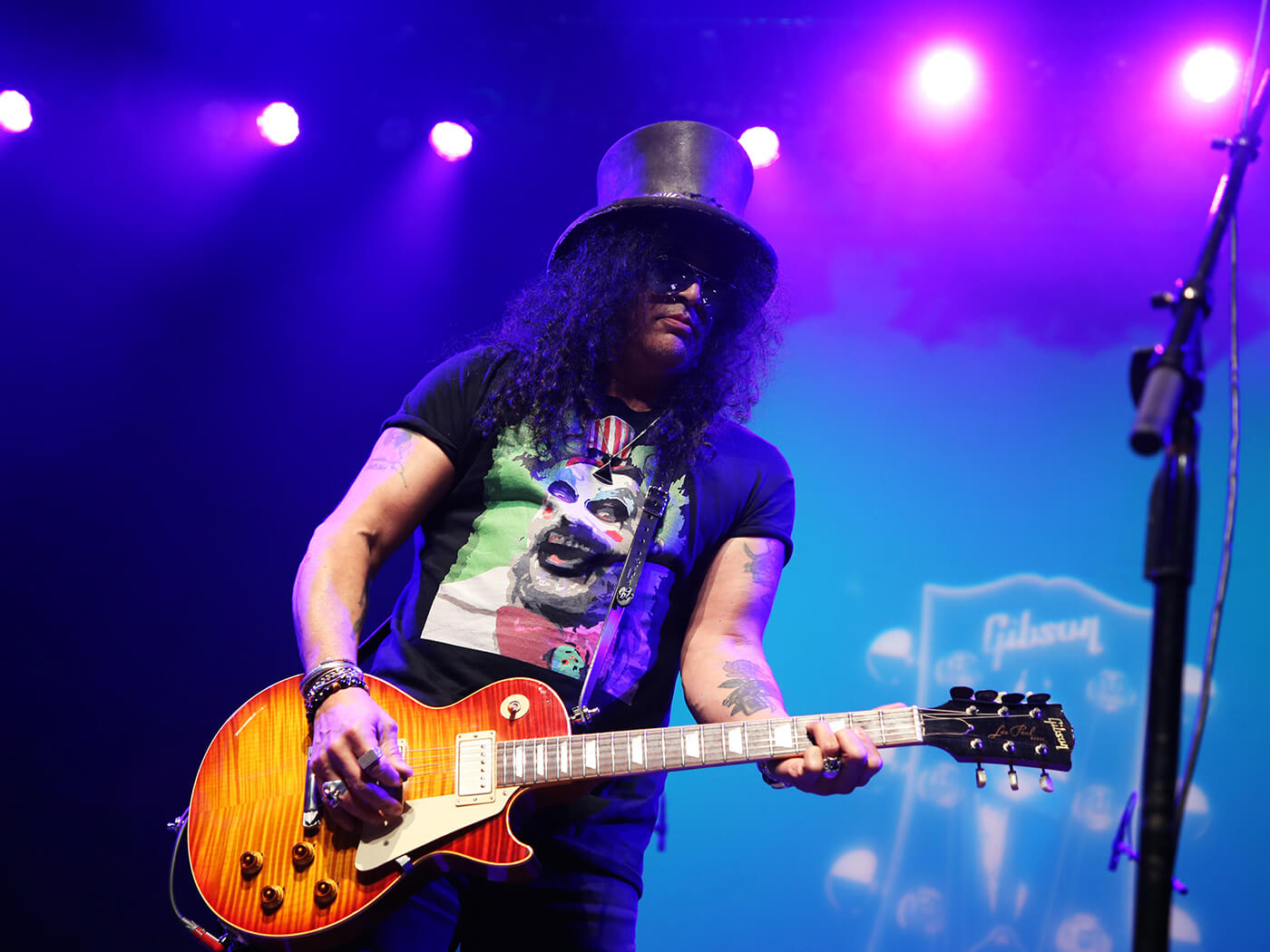 Slash doesn’t get to NAMM very often any more. After all, when you’re perhaps the most famous and recognisable guitarist on the planet, it’s hard to walk around the show floor without it turning into, in his own words, “a shit show”.

But for NAMM 2020 Mr Hudson had something special to show the world – a brand-new collection of Gibson guitars, including all-new signature Les Pauls and for the first time ever, a signature J-45 acoustic.

To celebrate the event, Slash and some famous musician friends took over a ballroom near the Anaheim Convention Center and had a good ol’ time. Before the event, however, he took some time out to chat about the new range and more.

So how does it feel being the first artist at Gibson to have their own collection, not just a signature model?

“It’s cool because in the past I’ve had individual Slash models, that are limited edition that would come out through the Custom Shop and that was it, but it’s just really nice to have a USA model – that you can look at the catalogue and it’s there all the time.

“And also just to make guitars that are more affordable, because the Custom Shop guitars were custom guitars and they were handmade, y’know? Anytime anybody wanted to get one of those guitars, you have to fork out fuckin’ a lot of money! So I’m really happy to be working with Gibson on these USA guitars – I mean, I’ve got one that I’ve been using for the last few months that plays amazingly, so I’m just really stoked about it.”

You worked really closely with Gibson CMO Cesar Gueikian on the range, you guys seem to have really developed a good rapport…

“We hit it off right away, on the first day I met him – he’s so enthusiastic. He’s a huge guitar fanatic – obviously a really smart businessman – but he has a great vision for keeping the heritage of the company intact. And also the future of the company, keeping it within the realms of what us guitar purists are into – not taking it left field to the point where nobody can relate to it. And so his ideas really meshed with where I saw the company should be, and that was great. And we talked about doing some guitars and everything was super copacetic.”

What’s the biggest difference between the old Slash guitars and the new Les Pauls for you?

“It’s an interesting thing – before I even got a new ’Cesar era’ Les Paul, I noticed a different vibe just in seeing the print ads. There was something about the vibe that was exciting. And then the first guitars that I saw, Cesar brought me over one of all the different models that they were going to be coming out with, and they just all felt crisp and tight and put together.

“One of the problems I had with some of the USA guitars a while back was I felt like there wasn’t as much focus on the way that they were set up. Not because the USA guys were putting them together wrong but I think it was just a general disillusionment that it developed over time, and you could tell that maybe they were not as enthusiastic about it as they are now.

“This is one of the iconic things in pop culture, y’know? It’s like Fender doesn’t need to play around with the Strats! If you want to have one line that’s totally out of the ordinary, it’s great, but to take the whole company and sort of set it in this direction… There was a time when if you went into a guitar store and you wanted to buy a new Les Paul, you had to have the robo-tuners. And that was not really what people wanted – it’s sort of like Apple when they stuck that [U2] record in your phone! That’s not how the guitar is supposed to work!”

The other big thing is that this collection features your first ever signature acoustic, which is a bit different to what we’re used to seeing from you…

“I actually do a lot of acoustic stuff, though you might not really know me for it. I’m not a folk guitarist or anything, but when we’re talking about new guitars that came up, because at that point, I was taking acoustics out on the Guns tour because few different songs in the set were acoustic. So that made perfect sense to me, and the J-45 was already the particular model of Gibson acoustic that I used.”

This is quite different to a regular J-45 though.

“It was really modelled after just my own particular tastes, so it’s almost like it’s a J-45S! It was really what I wanted for an acoustic. I took the regular standard J-45 and tweak the specs to make sure they’re right for me – so we had to make sure that the neck wasn’t too small, and we spent a little bit of time spent making sure the piezo was right.

“I’ve done a lot of experimenting with piezos and I’m not generally a big fan of the sound of electro-acoustics, because they just don’t have that rich sound. But in a live situation, there’s just no way to replicate the sound, because mic’ing stuff is just too unpredictable.”

Now that you’ve got acoustics and Les Pauls, do you think you’d like to expand the Slash collection in the future? After all, Gibson has just overhauled the Epiphone line.

“Well, I shouldn’t speak out of turn, but I would like to do an Epiphone line. And what we’re discussing now is doing another Goldtop, instead of it being a Custom Shop model. I love Goldtops, so I would love to have that.”

“That was definitely a revelation for me in the studio – I was the last one to realise! In the studio I’m using my AFD [Les Paul] and a couple other reissue ’59s, but I like knowing that I can always go to the P-90s if I need it for something specific.

You’re playing a big concert at NAMM this evening with a few special guests – is it fun to get up and play without any real expectations from the fans?

“Yeah it is fun. I’m playing with Don Felder for the first time, so that’s really cool – I like Don, he’s the guy. And then there’s also my buddy Billy Gibbons, and Rick Nielsen, who’s an old friend of mine. Rick especially is fun to play with, so that’s all great. And Jimmy Vivino is like the bandleader who’s put it all together, so it’s just fun to get up and play and do some cool songs that we picked just to jam on.

You probably don’t get much chance to jam on stage any more.

“Yeah, I mean, like I jam in bars and things and have done for a long time, but I haven’t been recently because I’ve been too fucking busy, so this will be fun tonight. And then I start Guns rehearsals on Friday!”

Speaking of Guns, have you got anything more you can share about the new album?

“There’s been no definitive answer on anything and I’ll just keep keep to that. Stuff is happening, but there are no specifics. More than anything, it’s because of the nature of the industry right now. It’s just like, how do you want to do this? I mean there’s material and there’s recording and there’s shit going on, but we’re not really sure what we’re doing with it right now.”

The music industry in 2020 is a lot different to the last time you all made a Guns record.

As a long-term Gibson ambassador then, what would you say has been the best and most exciting thing you’ve experienced since the new management came on board?

“That day that he brought all those guitars over, that was pretty exciting. And the conversation that ensued from that with Cesar, where we talked about where he was going to go with the company. Because, you know, the future of the company was looking pretty bleak for a second.

“So that was that was initially the most exciting, and then getting my hands dirty getting this USA line together, and working with them really tightly…”

Is the process much different than how it was when you were doing stuff with Gibson previously?

“Yeah, there’s a dynamic difference – not in my ideas, but in the way that I can relate them to the people I’m working with. And so some of these people I’ve known forever and the dynamic is different because they now have the freedom to do what they know they should.”

For more updates on Slash, check out slashonline.com.