We catch up with Dave Rusan, who built the iconic guitar that Prince would play in Purple Rain, to find out the story behind one of the Purple One's most unique instruments.

Prince was a different kind of rock star, and one of the things that made him such an enigmatic figure was his flair and unique style, something that was embodied in his unique taste in instruments. From Hohner Mad Cats to his more flamboyant designs like the ‘Symbol’ and ‘C-model’ guitars, he rarely chose the obvious or standard option.

There’s one custom guitar that stands apart from all the others he used in his career, however – a custom instrument that Prince was first seen playing in the film Purple Rain, and would become perhaps his most iconic and beloved instrument as the film and its accompanying album became a global megahit – The Cloud.

The guitar was built for Prince by a Minneapolis luthier named Dave Rusan. Dave honed his skills working from his house, and also had a shop at the Knut-Koupee music store in Minneapolis, which Prince had frequented as a teenager and a budding musician.

“One day I remember I was upstairs watching him play,” Rusan recalls. “He was doing some hammer-on stuff with one hand and play a line on the keyboard with his right hand that would harmonise with it. So we knew he was good!”

Minneapolis’s music scene was pretty small and tight-knit in those days, and so it wasn’t the first or last time that Rusan and Prince would cross paths in those early days.

“I tried out for his band a few years before, because I played guitar and I was pretty good,” Rusan recalls. “There was a rehearsal spot in town in a big dumpy old building that used to be a tire warehouse, and I got lined up through Bobby Z. Prince’s first album was out and it wasn’t a huge success, but it didn’t take a lot of imagination to think that somebody so talented might be destined for big things, so everyone in town wanted to try out for his band.

“I got there and Bobby was the and Andre Simone and that was it. Prince had put up a big poster of Hendrix on the wall and then he came in and he was eating a sandwich and he came in and started playing his synthesizer and we just did one-chord jams and at one point he asked me what kind of guitar I had because I had an Epiphone, but I had made a custom pickguard, but we jammed in different keys and stuff. He didn’t say hello or goodbye, but he played drums for a bit and a little bass. Andre Simone was the friendliest – he had a boombox that he was recording everything on so they could listen back, then Prince just left. Bobby Z said it went good, but Prince was really looking for a black female guitar player and at that time, I was neither of those!”

Rusan later left the shop to work in London for a little while, and while he was in Britain he worked on guitars for Keith Richards, Gary Moore, Randy Rhoads, Mitch Mitchell, Def Leppard, and many more. Upon returning from the UK, Dave went back to Knut-Koupee, and shortly after Prince came in and spoke with the owner about a custom build for a movie he was working on.

This guitar would become The Cloud, and due to his experience Rusan was the natural choice to build this unique instrument – but he was left with very little to work from in terms of guidance, beyond a bass guitar designed and built by Jeff Levin that Prince had purchased in New York in 1976.

“He said to take the bass as a starting point,” Rusan recalls. “It’s got to be white, it has to have gold parts, he already knew he liked EMG pickups, so it had to have those, he said it had to have spades on the fingerboard. A lot of people think they’re dots, but they’re actually little spades. He wanted one on the truss rod cover.

“There were a few times when I thought I’d really like to talk to him about something, and I would contact his roadies and techs and they would try to get ahold of him, but they never got back to me. So I just figured I’d make it so I’d like it, and if he doesn’t, I can’t help it.”

Over the next month and a half, Rusan crafted the design by hand, using the limited tools at his disposal to sculpt the spiral shape around the jack and the intricately carved upper horn. The finished guitar features a hard rock maple body with a set neck, sporting medium jumbo frets on a painted fretboard. The guitar was painted in white nitrocellulose by Tommy Stinson, formerly of Schecter, which was a budding boutique company at the time. It features a Gibson scale [24.75 inch] with a 13-degree angle on the headstock, a 12-inch fretboard radius, a brass nut, a Schaller 457 Bridge, and as Prince specified, those all-important EMG pickups – an SA model in the neck and an 81 humbucker in the bridge. 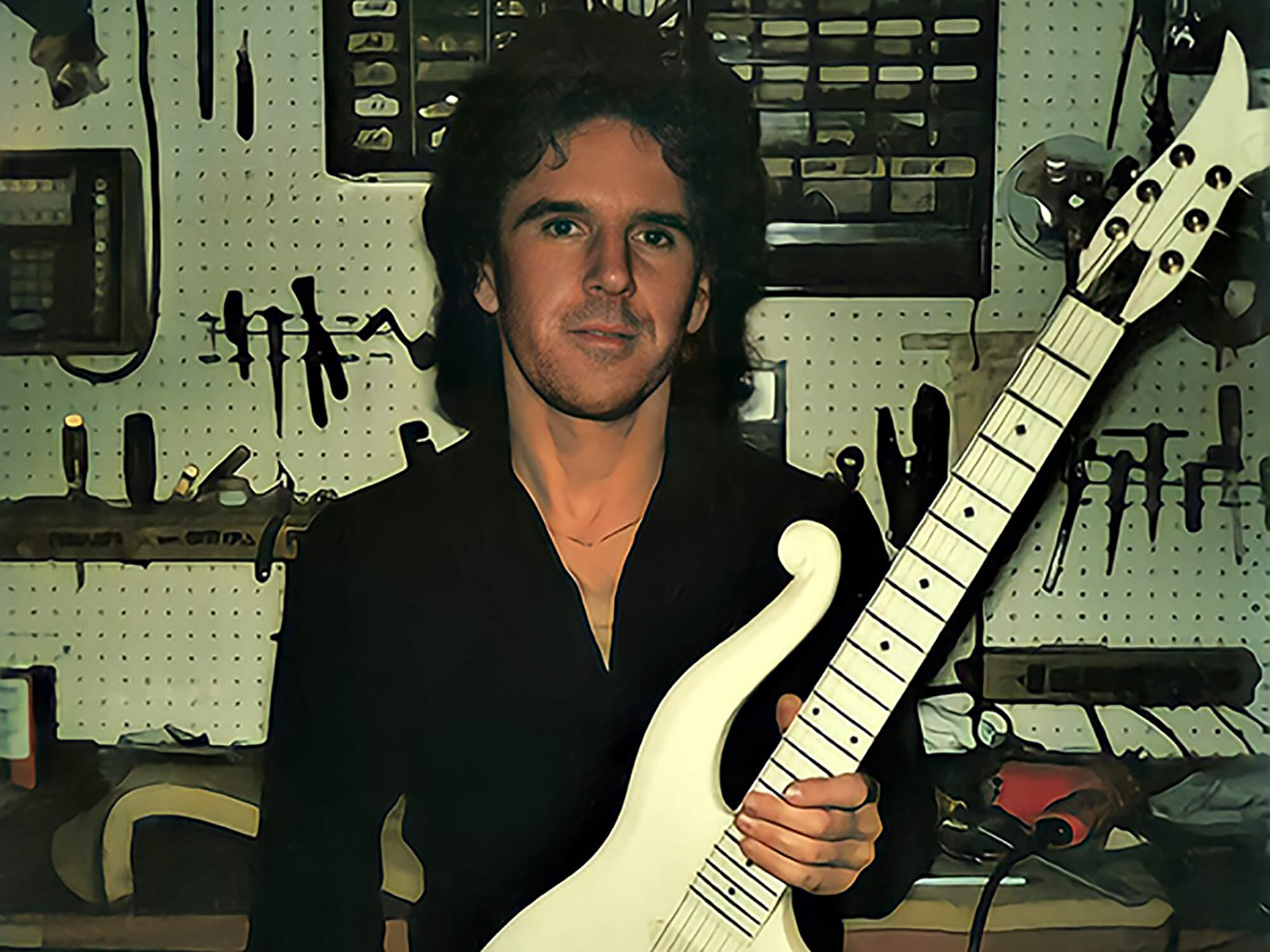 The guitar was delivered to Prince and used in the Purple Rain film – but of course this guitar had to be much more than a good-looking movie prop. The film was but one part of Prince’s multi-media plan for Purple Rain, and he would go on to use The Cloud on the platinum-selling soundtrack album of the same name.

With the movie a smash hit and the album in the process of spending 24 weeks at the top of the Billboard charts, Prince began to plan the subsequent Purple Rain Tour – but for this 98-date behemoth, he would need more Cloud guitars, and so he tasked Rusan with fashioning two more instruments. Dave built the new guitars from scratch, despite not having the original for reference, and the differences between the final three instruments were almost imperceptible.

“One day Prince came into the store after the movie had been successful,” Dave recalls. “I had already made the next two guitars he had requested, and Jeff Hill asked him about how he liked the guitars and if he wanted any changes. Prince just said he wished one of them had a bit narrower neck. 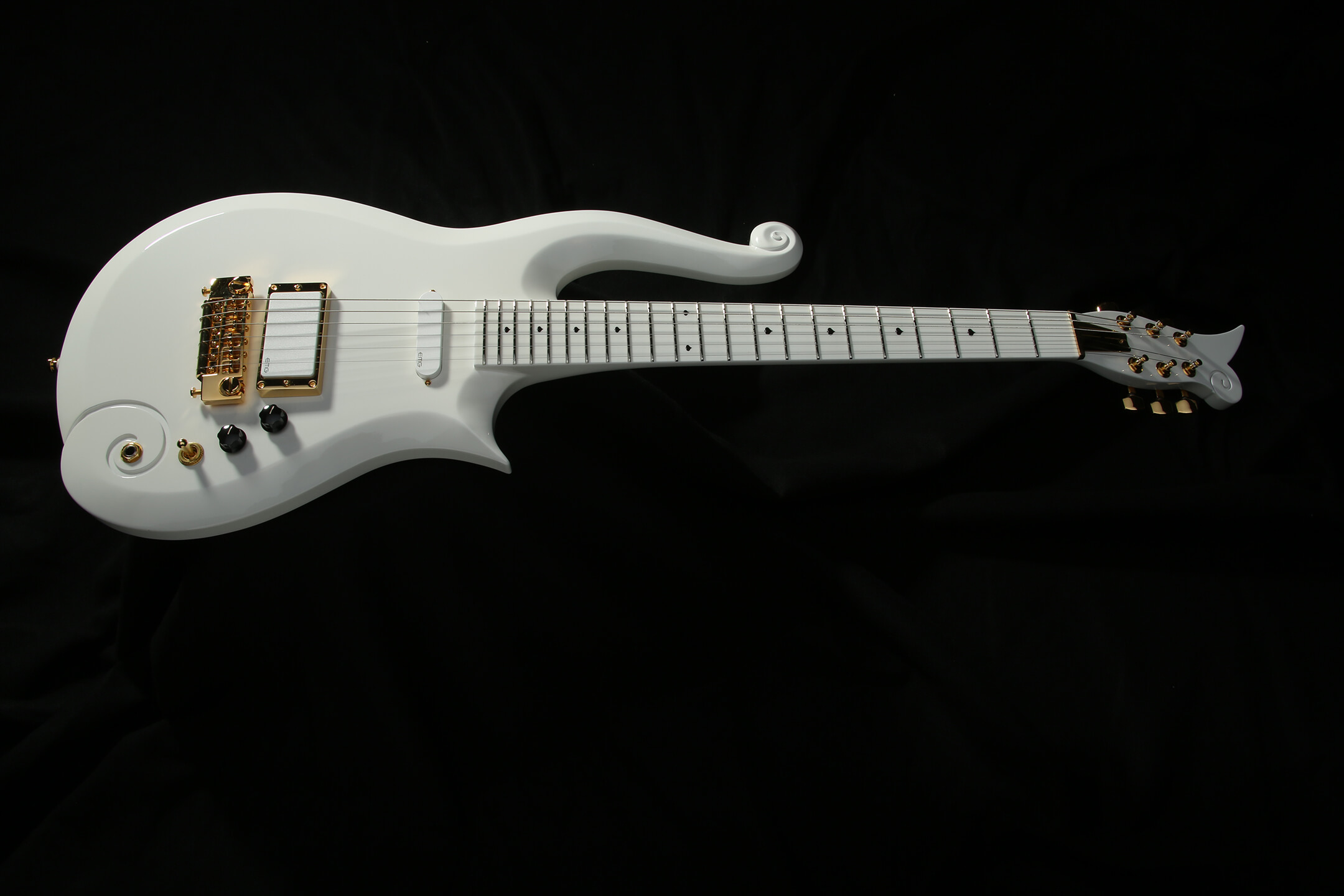 “He was so quiet and shy, even John Hill had a hard time trying to get him to say that he wanted a smaller neck on that one. When you attain a lot, like he did, you have to be able to communicate and motivate other people and somehow his talent and his work ethic must have overcome that shyness, because normally that would be a problem.”

The three guitars that Rusan built for Prince often came in for repairs as he was throwing them at the end of songs – and they weren’t always caught. They had been repainted several times over the years. Of the three guitars that Rusan built for Prince, one was repainted yellow and is now in the Smithsonian and another one sold at auction in 2020 for $563,500 – that one, according to Rusan had a badly damaged neck and is currently not playable. The third one, the one with the narrow neck that Prince specially requested, is missing.

“Prince was a guy who had to have guitars that would perform well for him, but it was all part of his big plan – his image was a big deal,” says Dave of Prince’s relationship to these unique and special instruments. “He’s not a guy who would sit around and polish his guitars or even think that much about them – they were tools. He was so multi-faceted – he was much more than just a guitar hero.”

Sometime in the late 80s, Prince fans began requesting replicas of the iconic guitar. Prince had since got replicas of the original built by Andy Beech and a few other luthiers, but some fans wanted a Cloud guitar that was built by the person who created the original. Thus began Rusan Originals – to this date Dave has built around 40 replicas of the guitar, each taking about 100 hours to build entirely by hand, completely authentic and true to the original, right down to the last detail and the use of new old stock parts.

Since Prince’s tragic passing in 2016, however, the legacy of The Cloud has been mired in legal complications. Demand for Rusan-built $8,000 instruments surged after Prince’s death leading him to trademark the body shape in 2018. Then in 2019 the Prince estate began selling Schecter-made replicas of The Cloud, and sent Rusan a letter demanding he surrender the trademark. Those legal issues are still ongoing, but Rusan is hopeful that the situation will soon be resolved in a fashion that would allow him to continue to build replicas of the guitar he first made three decades ago. 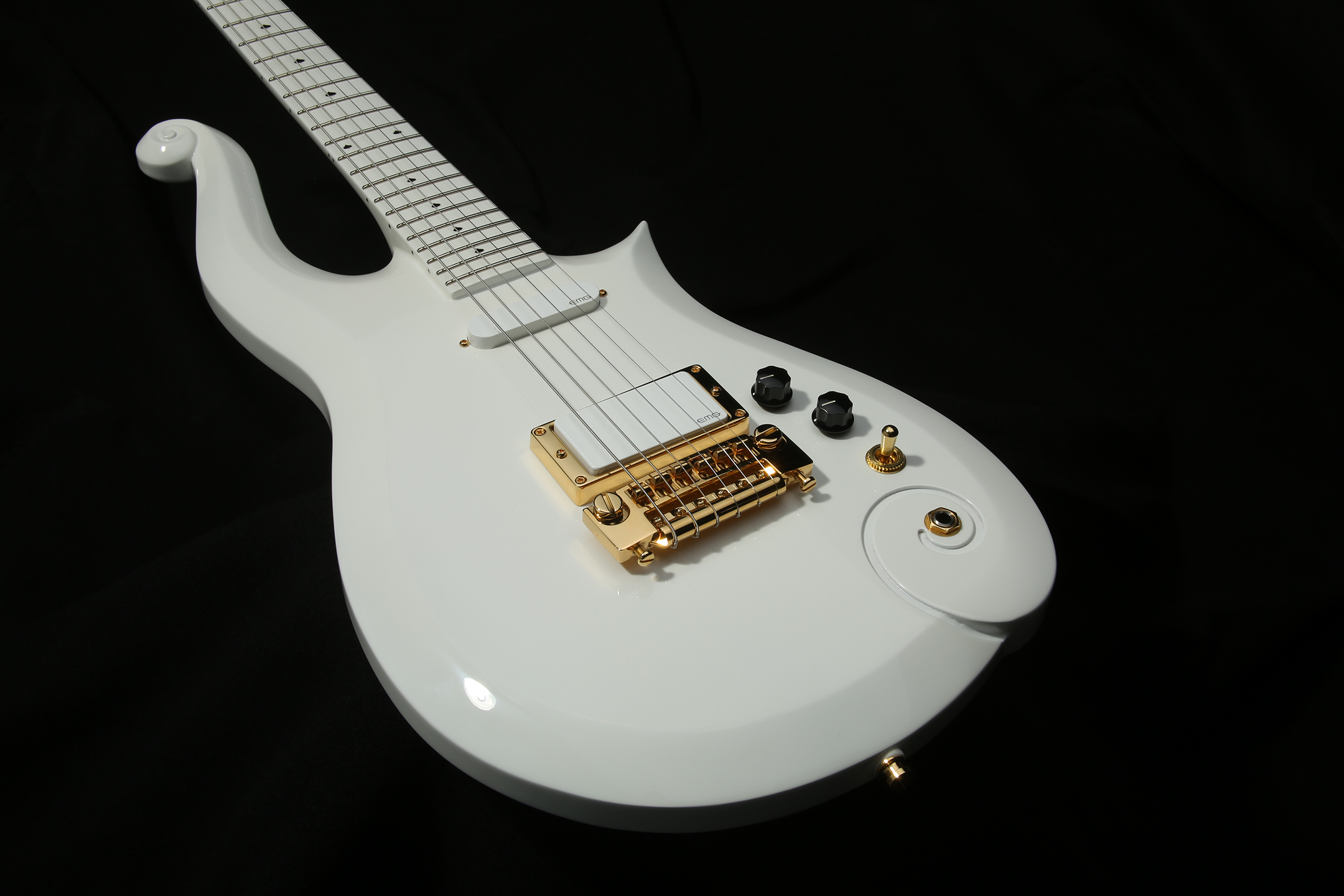 In that time, Rusan’s life and work has become irrevocably linked with that shy musician he first saw shredding in Knut-Koupee Music all those years ago. Before we wrap up our chat however, Dave is keen to remind us that Prince wasn’t always quite so shy. After he built the second and third Cloud guitars for the Purple Rain Tour, Rusan delivered them to Prince, where he was fortunate enough to sit in on some of the rehearsals, and witness a very different side to the artist.

“It was pretty eye-opening in some ways because Prince, who was normally so shy you could barely get him to talk, yet he was sitting at the soundboard directing the rehearsals,” Dave explains. “He sounded like a theatre director – I remember him saying, ‘Wendy [Melvoin], now I know you can get that part right, don’t get frustrated, I know you can do it.’ When I saw him doing that, I was wondering who that guy was. I was like someone else took over his body. He could do whatever it took to make things happen.”