Jargonbuster: Overdrive – how to understand your overdrive pedal

As BOSS celebrates the 40th anniversary of the SD-1, we head to the source to clarify some common overdrive jargon to help you understand your pedal better. 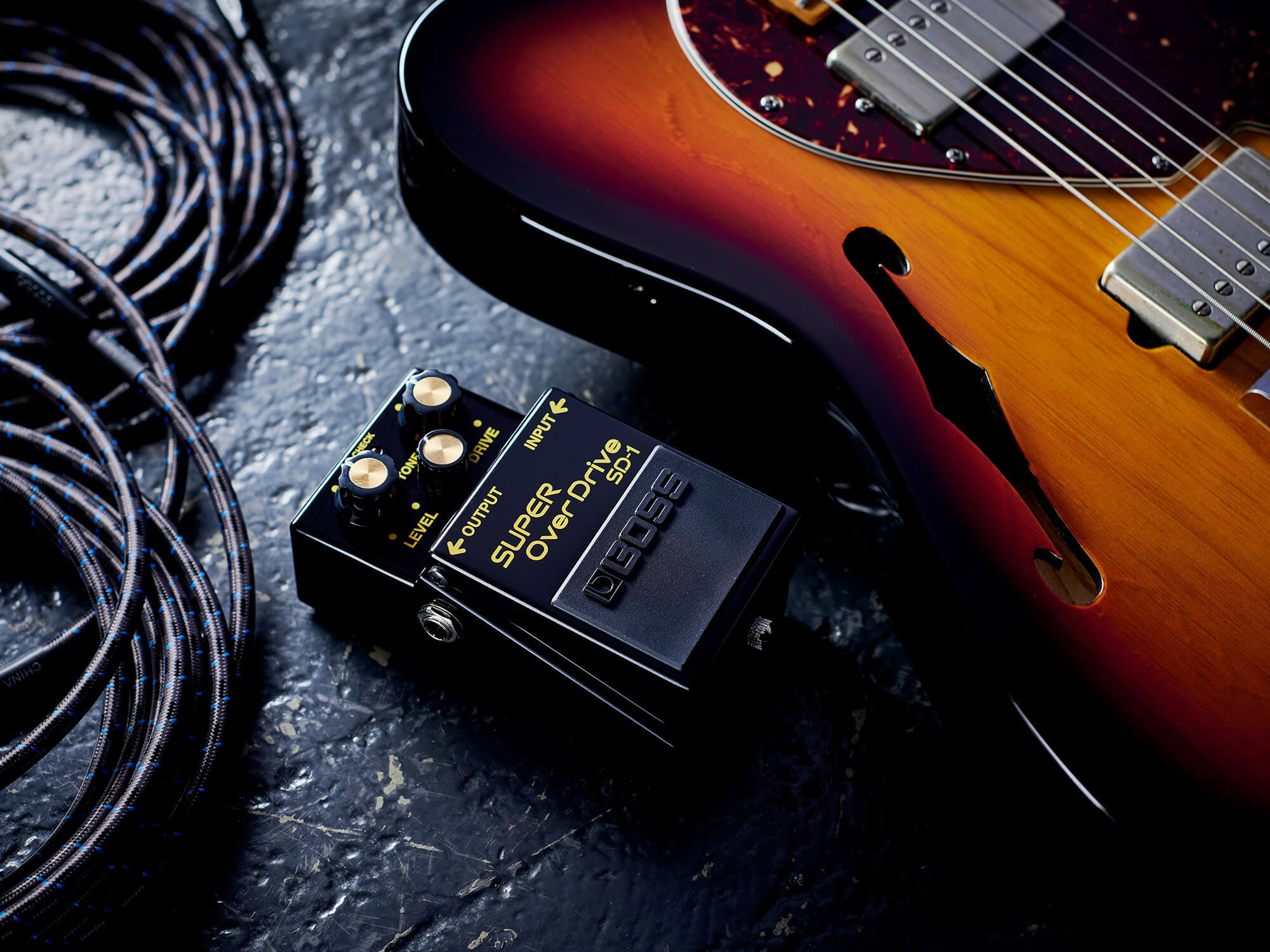 Overdrive: it’s probably the first pedal you owned, and chances are that you’ve got at least one on them sat on your pedalboard right now, but when we’re watching pedal demos or reading reviews, do we really understand what they mean when they drop terminology like ‘clipping’ or ‘bypass’? Well, thankfully we’re here to help, and we won’t be doing it alone.

The venerable BOSS SD-1 is celebrating its 40th anniversary this year – the SD-1 is perhaps the ultimate overdrive pedal, and certainly the one that has been found on more pro pedalboards than any other. With that in mind, we reached out to BOSS’s Product Engineer Team to provide their wisdom as we cover the common terms and assumptions made about the humble overdrive pedal.

This is a big one so we figure we might as well get this out of the way first. In technical terms, overdrive is just a different name for distortion, as both effects are a form of clipping (more on that in a minute). In real terms, the difference depends on the amount of gain you are using. A pedal with a lower gain that warms up your sound or pushes it to a crunch is commonly thought of as overdrive – the SD-1 is a perfect example of this, and is a big part of the reason why we call it overdrive! Anything past that point, however where the sound is more obviously processed is distortion – think the BOSS DS-1 in this case. 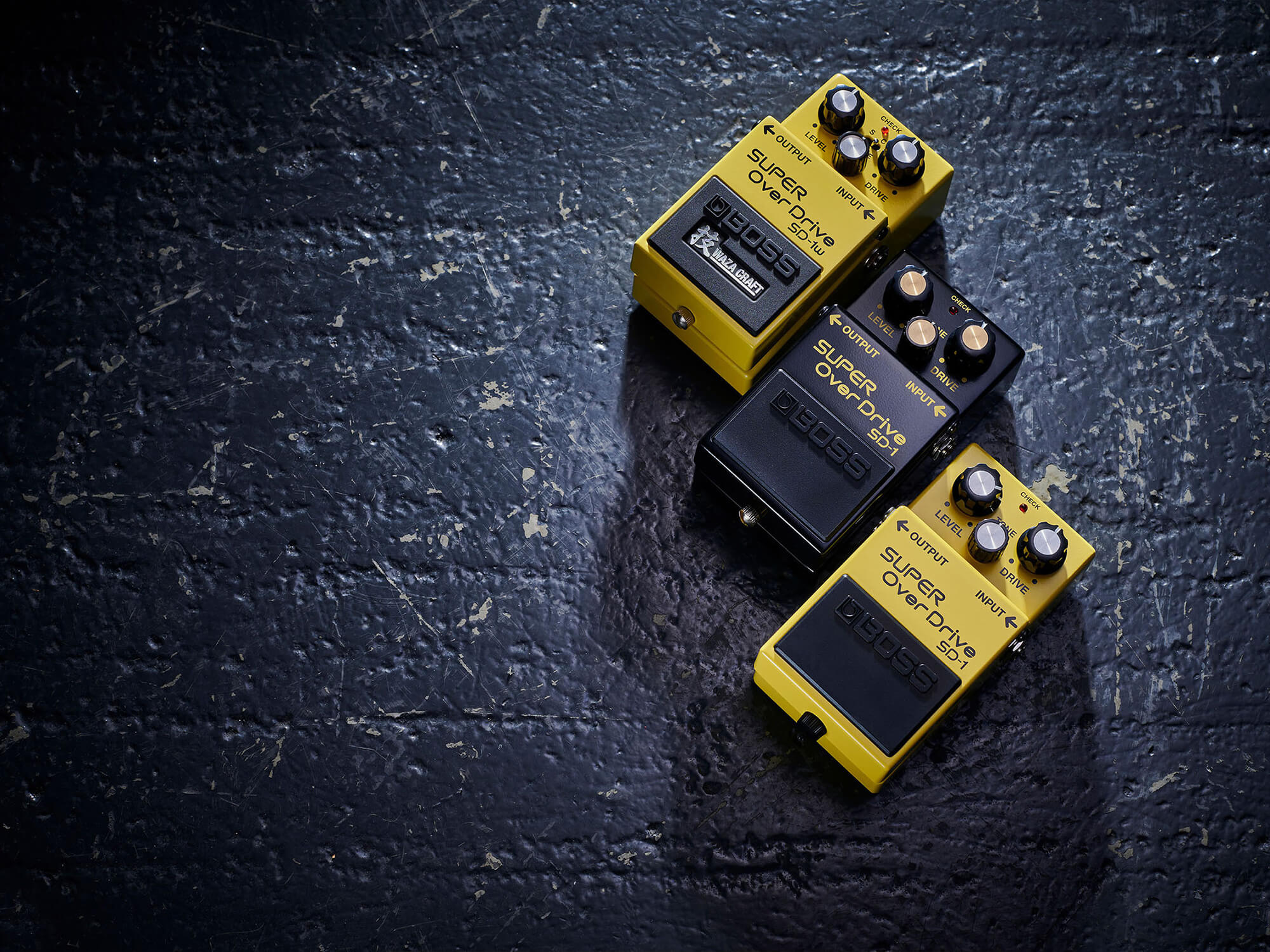 Clipping refers to the way that your guitar’s signal gets processed by a pedal. Think of your guitar signal as an undulating sine wave – when that signal is too much for the device to process, it can’t handle it and the wave looks like it has had the top and bottom literally clipped off creating a distortion of the sound. Now, in some circumstances that would be considered a bad thing, but in guitar? We love distortion, and the secret sauce to any distorted effect is the clipping of this waveform. 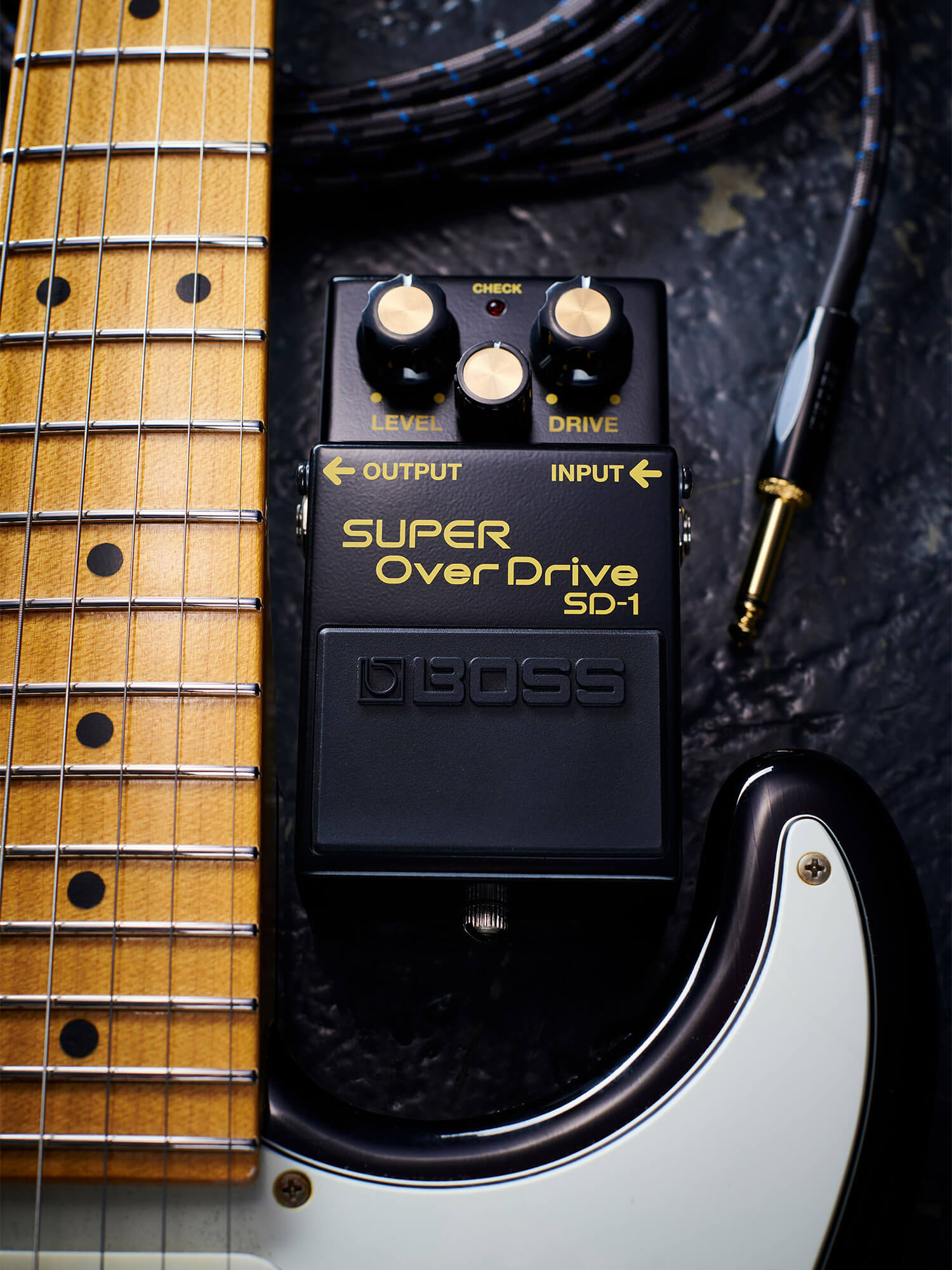 The signal coming from your guitar is not very strong, and while that might not be a problem if you’re going down a short lead directly into an amp, when you’ve long leads and pedals in that equation, that signal can quickly start to deteriorate – you need a buffer. In simple terms, a buffer amplifies the signal strength by boosting the current along your signal chain.

A ‘true bypass’ pedal means that when you turn a pedal off, the circuit is completely removed from the chain and it proceeds uncoloured (but also unboosted) on to the next part of the signal chain. With a buffered bypass pedal, such as the BOSS SD-1 part of the circuit stays in the signal path even when the pedal is switched off. This means that your signal strength stays consistent as it moves through your chain, and you also get quieter switching and better sound when using longer leads.

Neither of these is strictly ‘better’ than the other, it’s all a matter of what you need from your pedal at that point in the signal chain – plenty of users appreciate the clarity of signal offered from buffered bypass pedals.

Op-Amp is short for Operational Amplifier and this is what boosts your clean signal when you stamp on an overdrive pedal. This is then tweaked with diodes to give your overdrive character and all that lovely gain. An op-amp is an integral part of the SD-1’s performance.

‘Unity gain’ is where the output level of an audio device is equal to the input level – there is no amplification or attenuation occurring. Some people regard unity gain as being important for overdrive pedal like the SD-1 as in this state, theoretically the op-amp is doing the least amount of work, and therefore will be adding the least noise to the signal.
But how exactly do you dial in unity gain on your SD-1? We asked BOSS’s Product Engineer Team to explain, “Actually it’s difficult to define the unity gain,” they say. “All of the elements like guitar, pickup, or drive setting affect the level and are not always consistent. You have to find that balance where the volume is the same whether your pedal is on or off, so twiddle the volume knob and you will find it!” 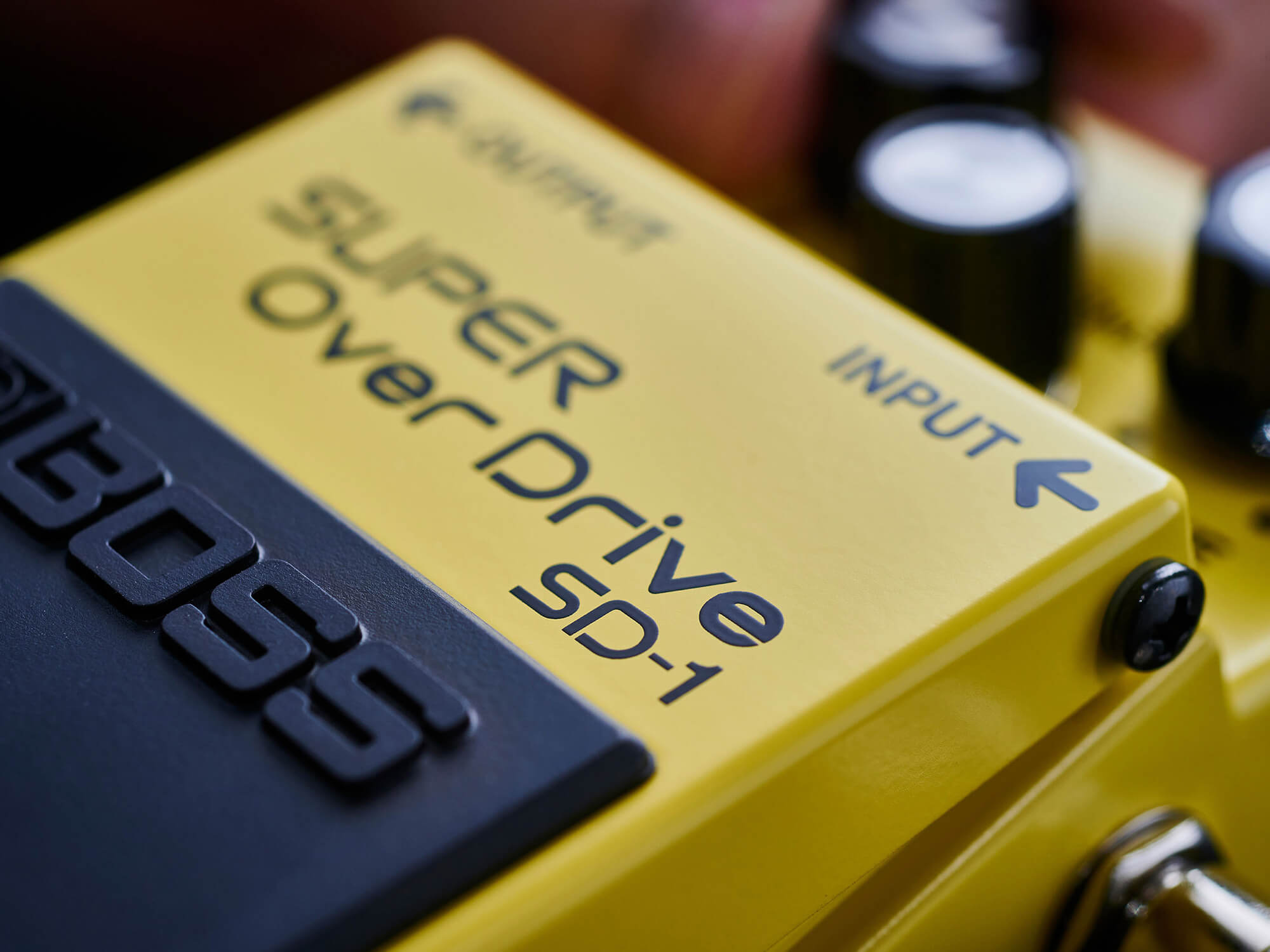 When the SD-1 was first released 40 years ago, most guitarists used 9V batteries to power their pedals, and some still swear by this method. However, the advancements in power supply technologies in the last 20 years have got us to a point where a drive pedal plugged into a good quality isolated PSU will sound just as good as a battery, and are of course much more stable and secure than using batteries – do you really want your sound to crap-out mid-solo? However, there are some players that extoll the sonic virtues of a depleted 9V battery in an overdrive pedal, and if that’s what you’re after, you might just have to take the risk!

“The SD-1 works as amp booster in any setting for clean and slightly driven amps to add more drive,” BOSS tells us.

“You can also use it on an already crunchy amp to create a solo lead sound, and even push a high-gain amp to bring tightness and definition thanks to mid-focused characteristic on SD-1. Even just as a booster, the SD-1 is a versatile pedal!”

People often lump the SD-1 and its forebear, the OD-1 together, and they are very similar pedals and circuits, but there are some important distinctions to be made between the two, not least the fact that the SD-1’s tone control gives it much more sonic flexibility.

“The tone control is the well-known difference,” BOSS agrees. “It allows us to cut or boost high frequency and works for wider sound adjustment. Also, the SD-1 has slightly different low-end character compared with OD-1, the tuning was made so it had a bit more thickness in the low-end.”

So now you understand the jargon used around overdrives, why not go and check it out for yourself? The BOSS SD-1 40th Anniversary Edition is available now, its flipped yellow on black colourway is only available for a limited time – it’s the secret ingredient your ’board needs.

For more on the SD-1 40th Anniversary Edition visit boss.info.