“I could have done 90 per cent of my career with an SD-1”: why the BOSS overdrive has been the pro guitarist’s secret ingredient for 40 years

Boss’s humble yellow overdrive pedal is one of the most important pedals of all time, and it remains a staple for professional guitarists today – this is why… 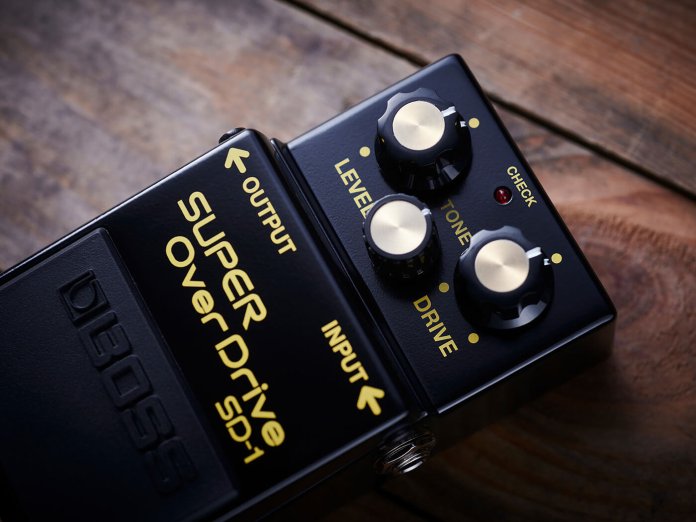 The guitar effects pedal market has changed a huge amount in the past four decades – designs have come and gone by the thousand and yet only a handful of pedals have achieved truly iconic status. One of these pedals is the venerable, inimitable BOSS SD-1 Super Overdrive, which celebrates its 40th anniversary this year.

The SD-1 was BOSS’s second overdrive pedal design, and added a tone control to the original OD-1 Overdrive – while the jury is still out as to whether that was the only tweak to the circuit, as the two pedals have very different personalities. Nevertheless, it was the SD-1 that proved to be the bigger hit.

For 40 years the SD-1 has done something rather unique – not only has it remained a staple budget pedal that millions of guitarists all over the world have turned to as their first step into the wonderful world of overdrive, but it has also remained a feature on the pedalboards and studios of the biggest guitarists in rock.

Jimmy Page, John Frusciante, Josh Homme, Johnny Greenwood, David Gilmour, Joe Satriani, Zakk Wylde, The Edge, Prince… a roll-call of some of the biggest and most influential names in the history of guitar, yes, but also a list of just a small sample of the pro guitarists who have used BOSS’s humble yellow pedal as the secret ingredient in their tones live and record.

But why, in this world of myriad boutique overdrive pedals and near-infinite choice does this affordable stompbox keep cropping up, keep being used as a secret sauce in professional rigs? Well, let’s ask some of them.

“It’s still up there, I mean, what else can you get for that price that sounds that good, is built like a tank, takes a battery and you can step on it?” says Pete ‘Danish Pete’ Honore – the session veteran and hugely popular guitar influencer who has worked with everyone from Tom Jones to Nichole Sherzinger. “I used to actually stand on the pedals on my board – and I still have them and they still work when I plug them in!”

And like all BOSS pedals, that ingenious Compact Pedal design is legendarily indestructible – designed in an era when pedals were tools that were meant to soak up the rigours of the road night after night. That tank-like build means that the SD-1 has longevity – even original 80s examples are likely to be in working order no matter how scarred the casing itself may be.

And then there’s the sound. And here’s where BOSS really did nail it from the off – the patented asymmetrical clipping circuit of the SD-1 has long been regarded for producing a wonderful tube-like overdrive that fits into the mix in any genre, and it’s this chameleon-like versatility that has meant that hardened blues-rockers and the most extreme metal guitarists can all appreciate the SD-1’s charms.

One seasoned pro who brings the SD-1 to a wealth of different environments is Adam Goldsmith. A veteran session guitarist, Adam has worked with Little Mix, Robbie Williams and Meatloaf, contributed to the soundtracks on Hollywood blockbusters including, The Hobbit, Mary Poppins Returns and Paddington 2, and contributed to The Voice, Strictly Come Dancing and Downton Abbey – and through it all, the SD-1 has been a constant.

“It’s just a classic sound isn’t it?” he tells us. “I think I could have done 90 per cent of my career with either a 335 or a Telecaster, a Deluxe Reverb and an SD-1 and everything would have been fine! It’s very recordable, it sits in the mix well and it’s easy to get a sound that I’m happy with”

Another exponent of the SD-1 is Dan Hawkins of platinum-selling rockers, The Darkness whose huge riffs and sinuous lead work owe much to the humble mellow yellow wonder. From the classic power chords of Permission To Land to their new album Motorheart the mighty SD-1 is front and centre.

“It was my first overdrive pedal when I was about 13 years old and that was it,” Dan tells us. “It was the ultimate overdrive sound right away for me and I will always have one on my board. It’s been on every album we’ve ever recorded – Love Is Only A Feeling was an SD-1 and a BOSS compressor a Space Echo – and it’s quite unusual for me to play lots of lead guitar on a Darkness song. I don’t know what it is about the SD-1 but it’s just got vibes. They nailed it didn’t they?”

They certainly did, and that’s why now, 40 years on we’re celebrating the SD-1. In a world of Klones, low-gain RATs and enough TS wannabes to reach to the moon and back, it is truly refreshing to plug in a pedal that has remained fundamentally unchanged in that time, and still sounds as good today as it ever did. And if you come back in another 40 years, we wouldn’t bet against the BOSS SD-1 continuing to be the secret ingredient that guitarists turn to when they want great overdriven tone.

Find out more about the BOSS SD-1 40th Anniversary at boss.info.