In the second part of our George Harrison workshop, we explore the world of major and minor sevenths, diminished sevenths and flat five chords as the quiet Beatle steps up to a solo career.

Up against the massive personalities of Lennon and McCartney, it’s hardly surprising that during the Beatles years George Harrison rarely contributed more than one or two songs to each LP. After the breakup however, the brakes were off and he found himself with a back catalogue of great songs which had never made it onto an album.

In this Chord Clinic we are concentrating on Harrison’s post-Beatles work, much of which demonstrates that he continued to grow as a musician, making some fascinating and unusual choices of chords and sequences. Not only was the harmony colourful, but he was also able to break away from the usual four-bar structures and develop his own identity as a songwriter.

Enjoy exploring some Harrison harmony and we’ll see you next time with an exciting new format for Chord Clinic. 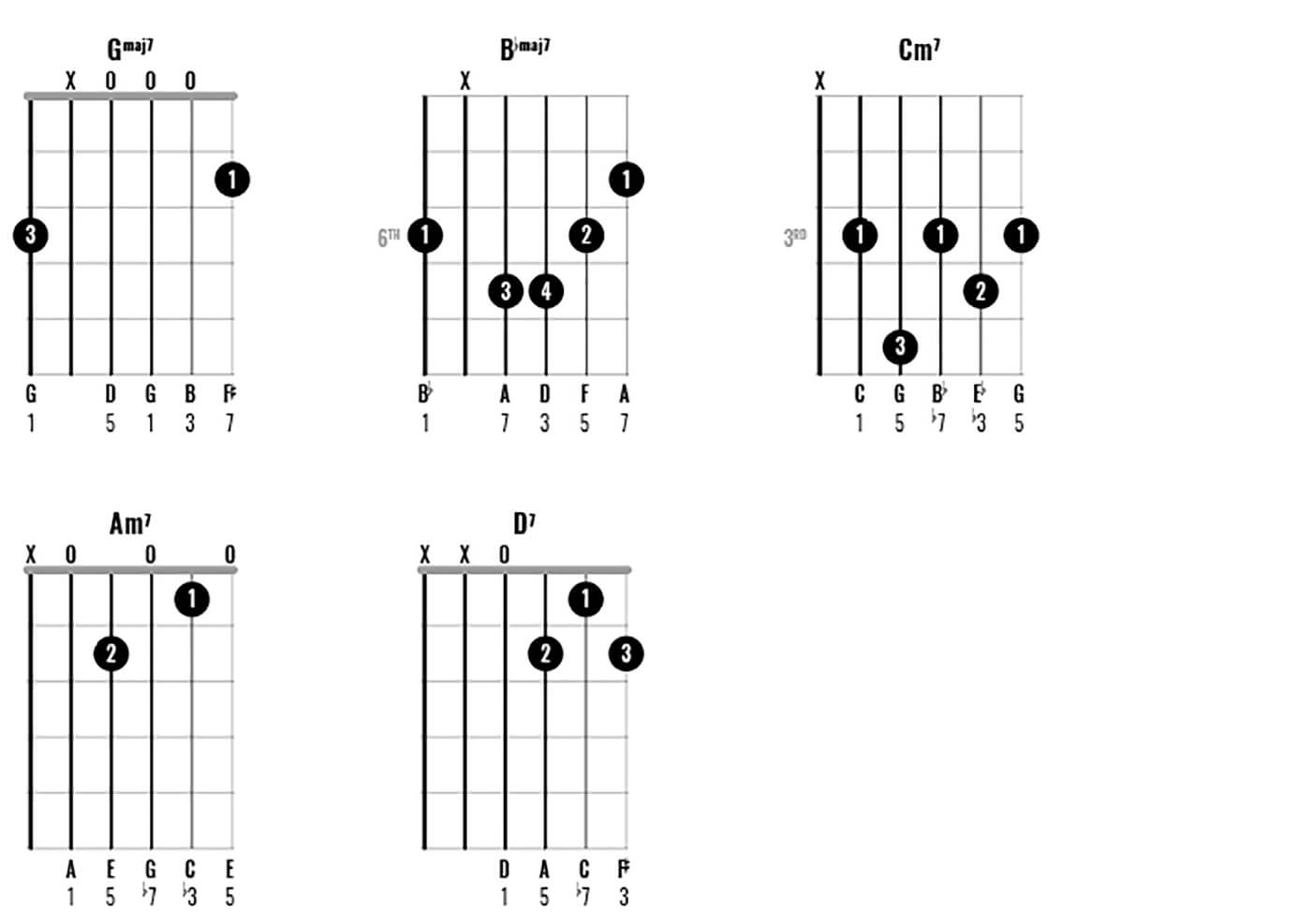 Ideally, you’d strum this sequence on your acoustic, making the most of those rich major seventh and minor seventh chords. Try going back to the Gmaj7 chord after Cm7 and then adding in the last three chords. Don’t worry if it doesn’t come out as an eight-bar phrase, six-bar sections are not unusual for Harrison at this stage. In the B♭maj7 chord your index finger is holding down the sixth fret on the low E string with its tip, and the fifth fret on the high E string with its base. This might be unfamiliar, but you’ll get used to it with practice.

Here we have a simple sequence involving chords I, II and V in D major but with the addition of a colourful, and rarely seen, Cdim7, played between D and E minor. As for figure 1, we are aiming for a strummed acoustic texture – try it with a capo at the second fret for added sparkle. You could also try making up some more parts in the same style using the Em and A7 chords, or maybe D and B minor.

This four-chord sequence is inspired by a song using one of the most unusual chords there is, a major chord with a flat five. G major is usually G, B and D. Here we have G, B and D♭. It’s a very crunchy and “out there” sound, which resolves beautifully down to the C major chord and then back to G major. We’ve gone for the fingering which we feel works best, but you could certainly try the first two chords with your thumb hooked over the low E string at the third fret. It takes self-confidence to use a chord like this − an example of Harrison’s growth as a songwriter.

Here we are inspired by Harrison in a rockier mode, so this one should work well on your electric with a crunch tone and a fast tempo. The idea is to go around the first three chords as a four-bar sequence and then add the last two chords as a kind of tag, ending up back on the B major and heading round to the top of the loop. Notice how the slash chord smooths out the transition from D to B. Try it with the root position A major as well and see which one you prefer.