Continuing our look at the chord shapes and sequences used by The Beatles, we get inside the head of Paul McCartney and find a songwriting genius with an enthusiasm for minor chords and chords from outside the key.

Many of the 50s vocal groups whose music inspired The Beatles tended to use harmony based on stock chord progressions, such as I-VI-IV-V, (G, Em, C, D), which can be found in many songs. Lennon and McCartney, however, had an instinct for rearranging these chords in original ways and combining them with great melodies.

In McCartney’s songwriting, minor chords occur far more frequently than might be expected, bearing in mind The Beatles other main influence – the 50s rhythm and blues heard coming out of the USA during their formative years. Enjoy experimenting with these chord sequences and we’ll be back next month with more McCartney-inspired harmony. 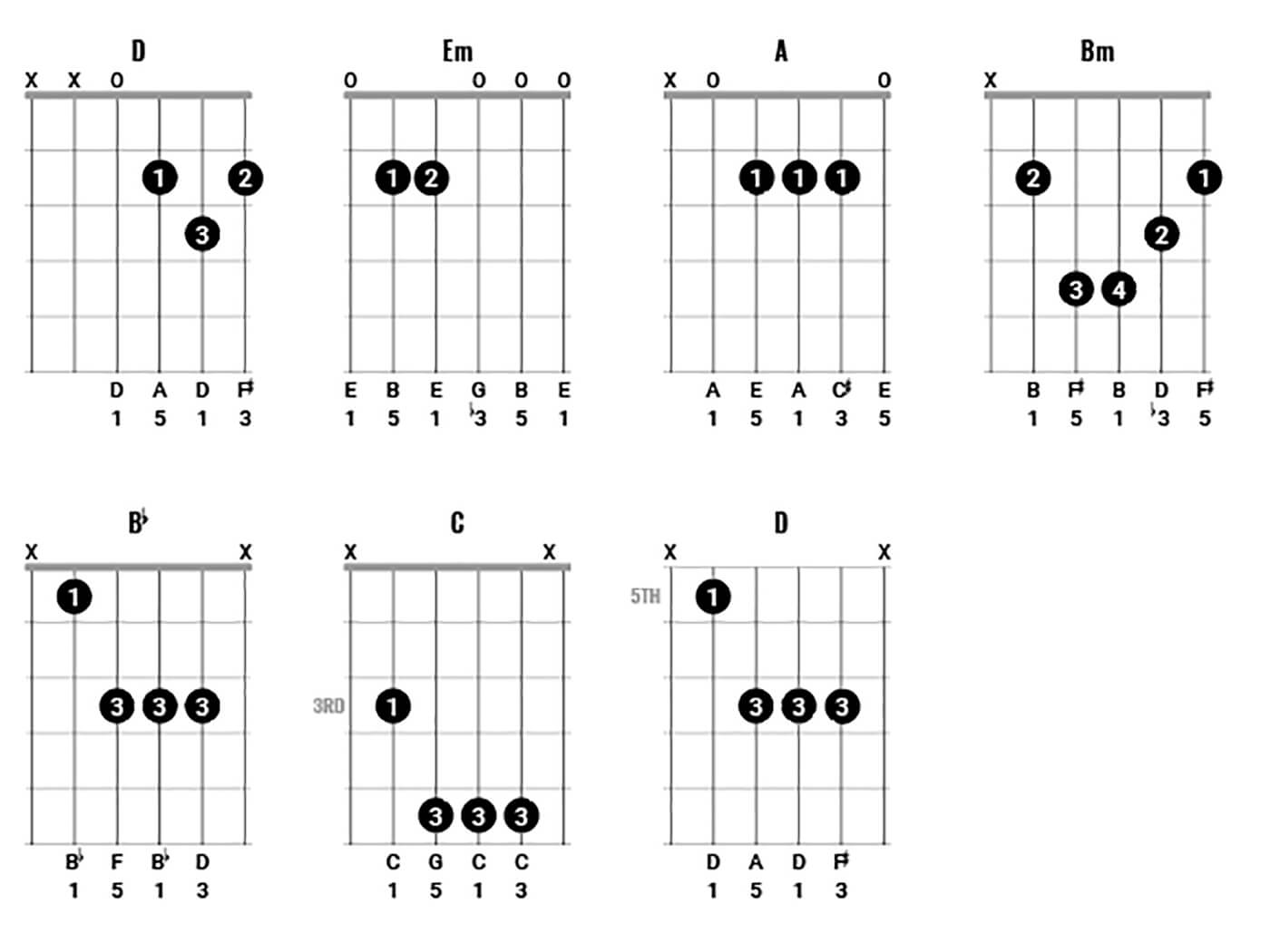 Many early Beatles songs rely on strummed acoustic guitars for their rhythm parts and use the basic open string chords that most guitarists learn when first starting out. In figure 1 you can play the first four chords as written, and perhaps fit in an extra bar by returning to the A chord after playing B minor. You can experiment by playing these chords in a different order, but end by playing B♭, C and D. Notice how ‘out there’ the B-flat chord seems in this context. This is because, along with the C chord, it’s outside the D major harmony that the other chords emphasise. Normality is restored as we climb up through C to return to D major, this time at the fifth fret.

Here, we’re in the key of F major and you can put together a verse switching back and forth between the F and B♭ chords. You could try adding G and C chords into the mix as well, and then play the four Figure 2 chords in the order they are written. You should hear the classic ‘climb’ as F7 pushes towards B♭ and B♭ minor. If you’re relatively new to guitar, barre chords such as these can be a challenge, especially on an acoustic. Concentrate on keeping your index finger flat instead of pulling with your arm.

We might have mentioned Paul McCartney’s liking for minor chords. He also enjoys ambiguous introductions which leave you wondering what key the music is going to be in, together with unusual structures, avoiding the usual four or eight bar phrases. You can play these chords as written or repeat the E minor and A minor to make a six-bar phrase. Is it in the key of E minor? Is it in G? Try C major as the next chord, and make up a verse using C, F and G chords. 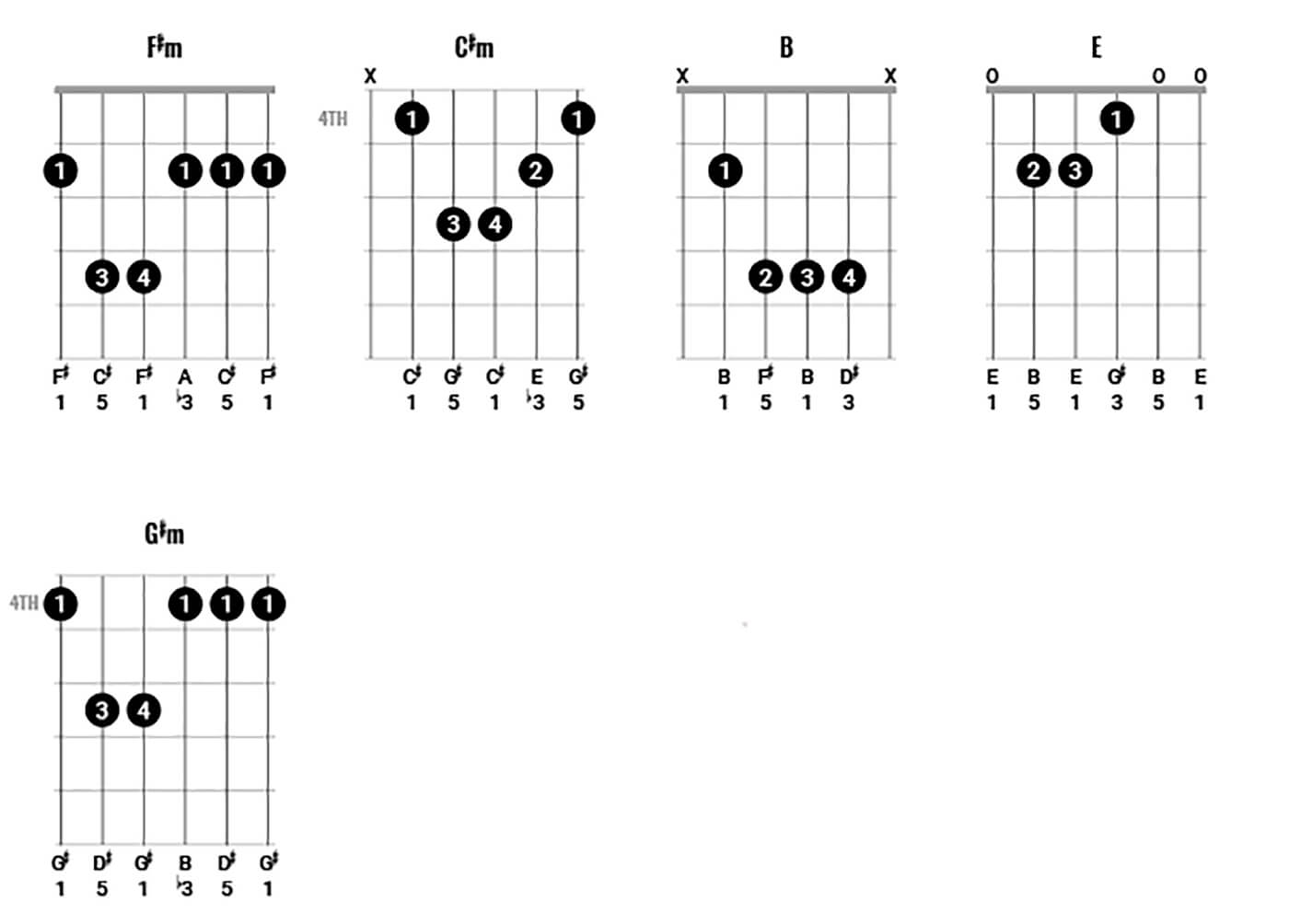 Here, we are switching backwards and forwards between F sharp minor and C sharp minor before progressing on to B and E. Don’t worry if it comes out as a 10-bar phrase, that’s normal for McCartney. You could also try dropping in an A chord just before the B major. If you’re not already impressed with the originality of this kind of chord sequence, try making up a second section using the G♯ minor, C♯ minor and B chords. It sounds easy and natural, but it’s not until you arrive on E major that the key of the music become apparent. That’s evidence of a truly original songwriter at work.