Achtung Baby is now acclaimed as U2’s finest achievement, and a reinvention that gave them a spur for years to follow. But the 1991 album nearly didn’t get made. In fact, its beginnings nearly split the Irish band apart.

Better than that “real” thing?

As the 1980s became the 90s, U2 found themselves at a crossroads. The Joshua Tree had turned them from stars into megastars. They didn’t just play shows, they played megashows. They were a major stadium act, but creatively they were faltering. As Larry Mullen Jr put it, “We were the biggest, but we weren’t the best.”

The band had been stung by media criticism of The Joshua Tree’s follow-up, the half studio/half live Rattle And Hum (1988). That ‘toying’ with Americana certainly delivered the expected hits (Angel Of Harlem, the Bo Diddley-esque Desire, the BB King duet When Love Comes To Town) but even some U2 fans found the album too much of a pastiche, too forced. The band themselves even called their own subsequent Lovetown tour as “a dead-end street.” U2 suddenly became the most loved/hated rock band on the planet. What to do? As Bono told a Dublin crowd in the late 80s: “We have to go away and dream it all up again.”

As guitarist Edge later reflected, the “traditionalism” of Rattle And Hum was the exception in the U2 canon. “My view,” he told this author in 1996 “is that Rattle And Hum, for all its traditionalism, is actually our ‘experimental’ record. Achtung Baby got us back to our normality – making dark, very European music with experimental sounds.” That said, this new normality meant the band U2 imposed new rules for the making of Achtung Baby, the band’s rebirth.

Bono: “Buzzwords on this record were trashy, throwaway, dark, sexy and industrial (all good) and earnest, polite, sweet, righteous, rockist and linear (all bad).” All that was good was the opposite of the “bad” U2.

One step at a time

But the sessions, in Berlin’s Hansa Studios, nearly collapsed completely. U2 had booked Hansa hoping to capture the “greatness” of two of their favourite albums that happened to be recorded there: David Bowie’s Low and Heroes. But when they turned up, they couldn’t even write a song. “The greatness,” Bono laughed about their creative block (in the U2 documentary movie From The Sky Down), “had left the building.”

Bassist Adam Clayton admitted in Bill Flanagan’s biography U2 At The End Of The World, constant touring in each other’s pockets had taken its toll: “We had to decide how much we liked each other… I’m not saying that was easily resolved.”

The song that rescued them? One. U2 were struggling to come up with anything all four felt was good enough to keep them moving forward and were hammering away at a demo called Sick Puppy (that later morphed into Mysterious Ways), when the Edge hit on an off-the-cuff chord progression that would become One.

“At the instant we were recording it, I got a very strong sense of its power,” Edge told Irish journalist Neil McCormick. “We were all playing together in the big recording room, a huge, eerie ballroom full of ghosts of the war, and everything fell into place. It was a reassuring moment, when everyone finally went: ‘Oh great, this album has started.’ It’s the reason you’re in a band – when the spirit descends upon you and you create something truly affecting. One is an incredibly moving piece. It hits straight into the heart.”

One is atypical of Achtung Baby in sound, but it did kickstart U2’s creativity. Some think the lyric is schmaltz: but the “one life, with each other, sisters, brothers…” line was later voted the greatest ever song line by VH1 viewers in 2006. “Earnest, polite, sweet, righteous, and linear?” One is actually all of those, but if U2 hadn’t dreamed that song up, Achtung Baby may have collapsed into nothing.

But after One, other songs soon formed. Maybe as a reaction to One, U2 felt free to get more aggressive. Lyrically, Achtung Baby was a volte-face for U2. Bono, for all his 80s piety and flag waving, came to realise: “Rock ’n’ roll is ridiculous,” he told Rolling Stone on Achtung Baby’s release. “In the past we were trying to duck that. Now we’re wrapping our arms around it and giving it a big kiss.”

Achtung Baby was hardly pop frivolity, though. Many of the lyrics centred on love, sex and betrayal. It was certainly not wished for, but Edge’s divorce of the time proved a catalyst for many of the lyrics. Bono’s invention of alter ego The Fly allowed him also to be less chest-beating and more subtle. Despite that, Achtung Baby is one of U2’s most baldly religious records. On Until The End Of The World, frontman Bono takes the role of Judas Iscariot betraying Jesus Christ. Not long before, the religious band would never have dared such a “heretic” curveball. 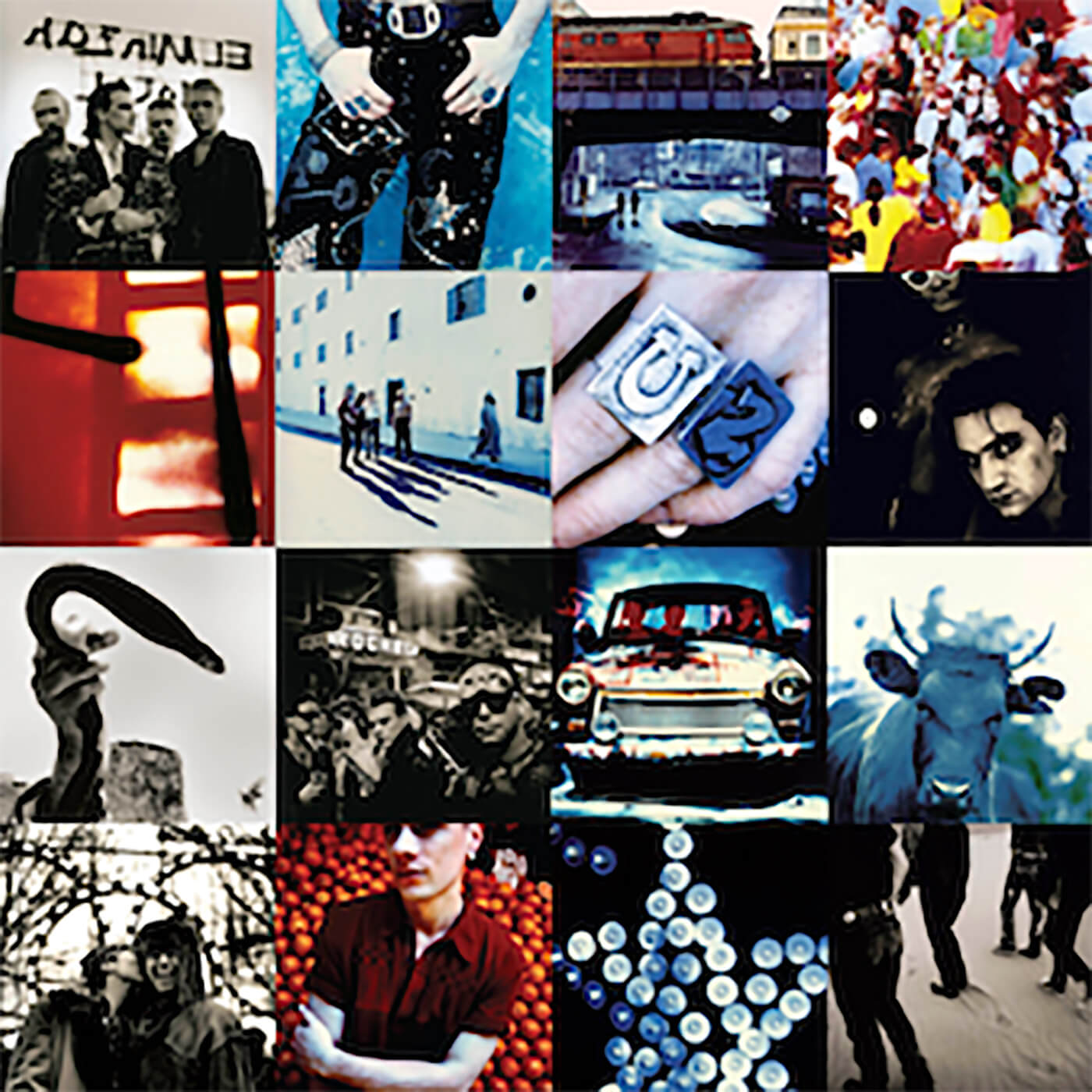 Daniel Lanois was the main “sonics” producer on Achtung Baby, and the Canadian told Sound On Sound magazine: “When I started work on Achtung Baby, U2 were interested in creating a more hard-hitting, live-sounding record. I myself had also grown rather tired of polishing details on records and pursuing the kind of perfection that has become commonplace in much rock music today. So what I did was push the performance aspect very hard, often to the point of recklessness. I think that musical recklessness goes a long way on records. You don’t hear enough of it.”

But, crucially, Brian Eno acted as co-producer… and more in a strategic role. Eno would not listen hard to anything in progress, but every few weeks would “come in and erase anything that sounded too much like U2.” He started using in his fabled Oblique Strategies cards on the group to push them away from predictability, so he’d be surprised at what he heard at his next visit: “Use an old idea”. “Change instrument roles”. “Work at a different speed”. “(Play in) total darkness, or in a very large room, very quietly”, and so on…

Even so, U2 still gave themselves maximum options – throughout the sessions, they played relentlessly and kept tape constantly running to capture spirited moments. Yet despite the connotations of the title, U2’s Hansa studio sessions barely lasted two months: most of Achtung Baby was eventually recorded in Ireland, in a rented house by the sea, then Dublin’s famed Windmill Studios.

Go to the Deluxe Edition of Achtung Baby and listen to The Lady With The Spinning Head, an alternative take of Ultra Violet and The Fly in transition: it shows how much more supple these new U2 songs were. Lanois recalled: “They continuously experiment and try different ways of playing and arranging the songs, until the very last moment. The guitar overdub on Mysterious Ways, for example, went down after the mix was finished.”

The guitars on Achtung Baby were, as ever, key. Edge’s search for darker, more sinister sounds saw him increasingly move away from his Gibson Explorer and repeat-delay Fenders in favour of Gibson Les Pauls. The change of tools gave his guitar tracks new weight, be it on The Fly, Until The End Of The World, or Love Is Blindness where he pushed a Les Paul through eight chain-linked Vox AC30 amps.

Edge was no stranger to Gibson Les Pauls. He bought his famed white 1975 Les Paul (later auctioned for his Music Rising disaster relief charity) in 1982, inspired by Steve Jones of the Sex Pistols. A 1983 Les Paul Gold Top stars on Until The End Of The World. Other newfound favourites added to Achtung Baby’s more adventurous tones – a Gibson ES-330 for the Who’s Gonna Ride Your Wild Horses and One, a Fireglo Rickenbacker 330 for Mysterious Ways.”

Many other makes and models are part of Achtung Baby’s sonics, of course. And perhaps the key, as always, were Edge’s effects. He bought two Korg A3 multi-effects units, and it is at the heart of many of the album’s sounds: Mysterious Ways showcases the Korg A3 to the maximum, and Edge admits he could not have written the song without it.

“Rockist=bad” may have been a U2 mantra of the time yet, ironically, Edge’s guitar on Achtung Baby packs the most aggressive rock guitar of U2’s lengthy career. Ultra Violet (Light My Way) is played like ‘old’ U2, but is much heavier. And from Zoo Station to Until The End Of The World, to Acrobat and beyond, Achtung Baby arguably boasts Edge’s darkest yet greatest guitar work.

Of all U2’s releases, Achtung Baby is “the Edge album.” The guitarist put aside his personal strife and threw himself into work. Adam Clayton remembered: “When Edge gets on a roll, he gets on a roll. He’s always been happy to keep going. I think his process of keeping going, although damaging on a personal level, has allowed him to make great strides, has been the right thing for his career. He’s made tremendous progress, he’s a great guitar player.”

Is Achtung Baby the most coherent and consistent of any U2 album? Is it U2’s best? It probably is.

Edge still sounds like The Edge, but he coaxed new, darker tones that released U2 from the chiming echo of The Joshua Tree and before. Achtung Baby’s harder sound and lyrical playfulness not only saved the band… it laid a path to U2’s future.