Released 55 years ago this month, Bob Dylan’s seventh album featured a cast of stellar session players and completed an imperial trilogy. For many fans, it’s the ultimate Dylan record.

Rock’s first double-album and Bob Dylan’s seventh in five vertiginous years, Blonde On Blonde is a scintillating fusion of rock, blues, folk and country guitar music, an intoxicating brew of surrealist imagery and some of the finest poetry to unfurl from Dylan’s masterly pen. It was, according to its creator, “the closest I ever got to that sound in my mind, that thin… wild mercury sound.”

Released in June 1966, Blonde On Blonde completed a stunning trilogy over 15 months, a run equalled only by The Beatles’ mid-60s imperial period. After unleashing the semi-electric Bringing It All Back Home in March 1965 and fully committing on Highway 61 Revisited five months later, 24-year-old Dylan arrived at New York’s Columbia Studio A in October with boos ringing in his ears, along with The Hawks and producer Bob Johnston.

The sessions and further attempts early in ‘66 yielded little, leaving Dylan to reflect: “I was really down. In 10 recording sessions we didn’t get one song … It was the band.” Seeing off resistance from manager Albert Grossman, Johnston persuaded Dylan to go to Nashville. Accompanied by Robbie Robertson and Al Kooper, who played the organ on Like A Rolling Stone, Dylan was met by session aces who eyed the New Yorkers suspiciously.

While Mike Bloomfield starred on Highway 61, Blonde On Blonde’s guitarists include Charlie McCoy, Wayne Moss, Robertson and Jerry Kennedy. Mythology surrounds who played what, debate even rages over what date the album was released, but in Nashville, Dylan had found the perfect environment for his magnum opus to unfurl. Johnston reputedly sent in a janitor with a sledgehammer to remove any obstacles to live recording, Dylan working on a piano at the Ramada Inn while the sessioneers played cards and waited for the call. Dylan liked what he found in Music City, telling an Australian interviewer: “If they want to make good records they just sit around and wait all night ‘til you’re ready. They won’t do that in New York.”

Biographer Robert Shelton wrote that Blonde On Blonde starts with a joke and ends with a hymn. Accounts differ over the order in which the songs were recorded, but McCoy believes the majestic 11-minute album closer Sad-Eyed Lady Of The Lowlands, with its streetcar visions, Arabian drums and memories of Cannery Row, came first, in the early hours of 16 February 1966. “I was playing one-handed, looking at my watch,” recalled drummer Kenny Buttrey. “It kept on and on”. It was the longest pop song ever recorded, cut in a single take, and Dylan would later proclaim it “the best I’ve ever written”.

The February sessions also yielded Visions Of Johanna and Stuck Inside Of Mobile With The Memphis Blues Again, which later featured on the soundtrack to Fear And Loathing In Las Vegas. Dylan returned to Tennessee in March, these sessions culminating in a party at which everyone was encouraged to “get stoned” before recording the opening Rainy Day Women #12 & 35. “He said ‘I’m not going to do this with a bunch of straight people. We’ll send out for something’,” recalled Moss in Howard Sounes’ Down The Highway biography. The musicians, high as kites, swapped instruments and Dylan demanded the sound of a marching band, with trombonist Wayne Butler called in. Recording kicked off at midnight, Henry Strzelecki laid on the floor pushing Kooper’s organ pedals and laughing maniacally. 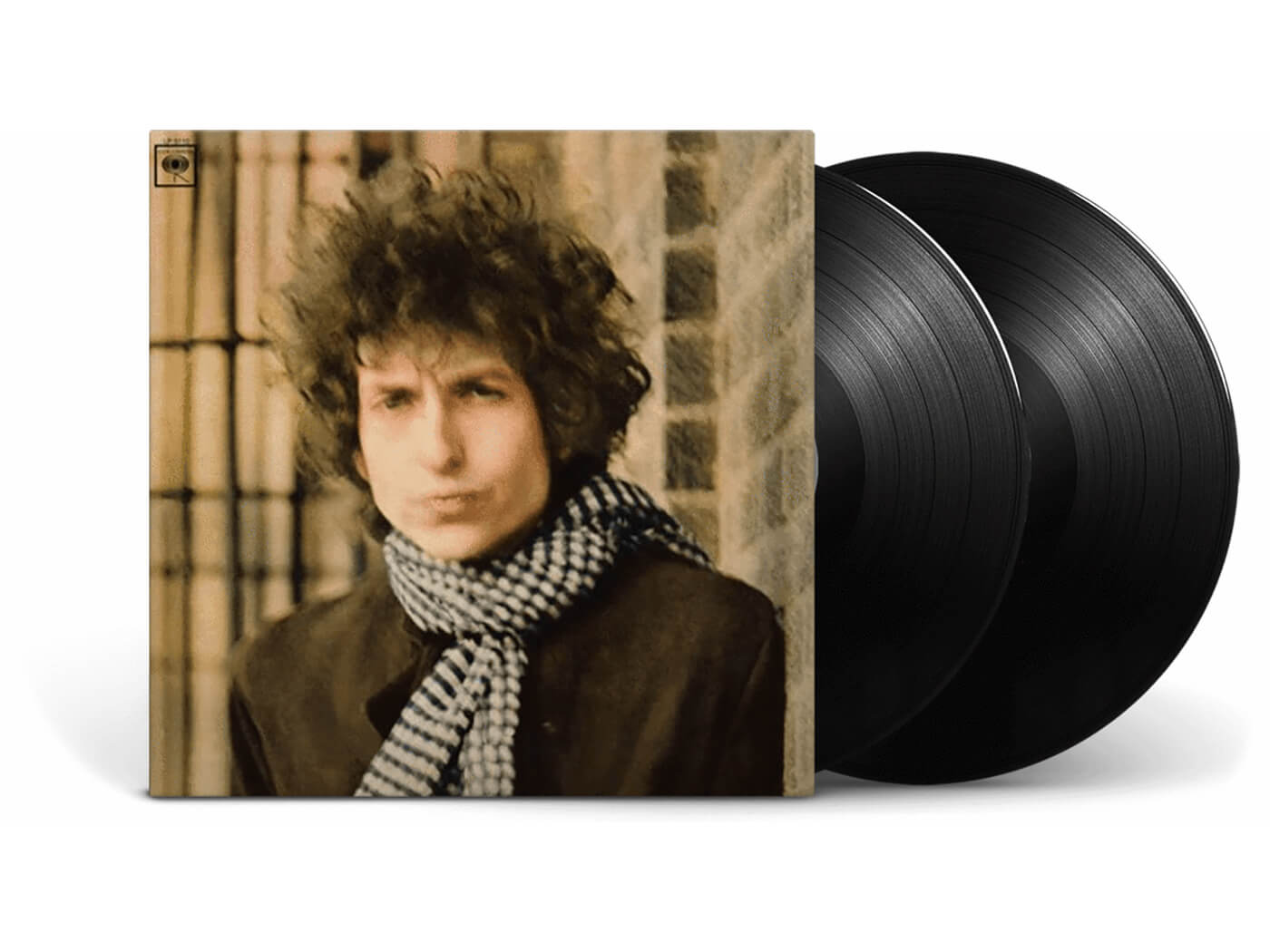 Announcing the album with a wonky ode to getting high was textbook uncompromising Dylan, and despite its overt drug references, when released as a single it reached No. 2 in the Billboard chart. From there, Blonde On Blonde is a bluesy masterwork, refining the blueprint established on Highway 61 Revisited. Robertson is in incendiary form throughout. He remembers the Nasvhille musicians falling silent as Dylan handed him his first opportunity, on Obviously Five Believers. “Bob and I wailed like we were at a blues bar in Mississippi,” Robertson wrote in his biography Testimony. “My extreme bending and quivering of notes wasn’t in any of these guys’ arsenals, so I wasn’t taking anybody’s job.”

The slow-shuffling Pledging My Time nods to Robert Johnson’s Come On In My Kitchen, while Most Likely You Go Your Way (And I’ll Go Mine) recalls Buddy Holly’s It Doesn’t Matter Anymore. Visions Of Johanna, with its fine opening line of “ain’t it just like the night to play tricks when you’re trying to be so quiet?” is a stunning literary love song, Kennedy playing the lead on his ES-335. One Of Us Must Know is a classic fork-tongued Dylan apology, splashed with Kooper’s swirling organ playing and jubilant piano ornamentation, bettered by the sprightly and devotional I Want You, Moss’s Chet Atkins-style intro and lyrical phrases responding to Dylan’s yearning vocal. Robertson then returns with a stinging lead part on the Chicago blues Leopard-Skin Pill-Box Hat, captured at the 22nd attempt.

Just Like A Woman’s “fog, amphetamine and pearls” are widely believed to refer to Edie Sedgwick, Fourth Time Around with its elegant fingerpicking in drop C tuning, is Dylan’s response to The Beatles’ Norwegian Wood, before Robertson takes his bow on Obviously Five Believers and Dylan signs off with one of the most absorbing love songs he ever crafted – Sad-Eyed Lady Of The Lowlands, written for his wife Sara Lownds. Despite stretching to an hour and 12 minutes, there isn’t a weak song on Blonde On Blonde.

The sound of 3am

“Nobody has ever captured the sound of 3am better than that album,” said Kooper after the dust had settled. Crawdaddy! editor Paul Williams called Dylan a “1960s bard with electric lyre and colour slides”. Blonde On Blonde was high art, simultaneously surreal and achingly romantic, a towering landmark in the middle of pop’s greatest decade. It reached No. 9 in the US charts and No. 3 in the UK, silencing critics who’d demured at Dylan’s electric rebirth. Melody Maker’s review was surprisingly lukewarm, underplaying a “more than competent blues rock band” and a collection that “may not be as startling as The Freewheelin’ or Highway 61 Revisited”. By 1974, NME was placing the album second in its list of the greatest records ever made. Dylan scholar Tim Riley wrote in 1999: “A sprawling abstraction of eccentric blues revisionism, Blonde On Blonde confirms Dylan’s stature as the greatest American rock presence since Elvis.”

Dylan’s first Nashville record sent a trail of bands to record in a city hitherto overlooked by musicians from both coasts. He returned for the following year’s John Wesley Harding before closing the decade with Nashville Skyline, yet while it represented a beginning in one sense, Blonde On Blonde feels more like the end of an era. One month after its release came the mythologised motorcycle accident that saw Dylan withdraw from public life and embark on a new chapter.

“I was going at a tremendous speed… at the time of Blonde on Blonde,” Dylan told Rolling Stone editor Jann Wenner in 1969. After roaring through the first half of the 60s at such velocity, it was inevitable he would have to slow down. Dylan would never make an album that rocked as hard as Blonde On Blonde, and some critics believe he never bettered that thin, wild mercury sound.