“Who brought me here?” howls Cedric Bixler-Zavala as the Mars Volta’s blistering debut draws to a close, giving voice to the narrative-driven record’s central character, Cerpin Taxt. De-Loused in the Comatorium charts the outer reaches of one man’s collapsing mindstate via manic rhythms, funk bass (courtesy of the indomitable Flea) and dissonant, unruly guitar, and is one of the most intense hours you’re likely to spend with an album.

With its two founding members rising from the ruins of the aborted post-hardcore punk outfit At The Drive In, Bixler-Zavala and guitarist Omar Rodríguez-López took their new vehicle’s multi-sectioned cues from the likes of King Crimson, Genesis and, quite markedly, Pink Floyd. This was emphasised by Floyd’s frequent collaborator, graphic designer Storm Thorgerson, delivering De-Loused’s exquisite artwork.

As Pink Floyd demonstrated on their timeless Dark Side of the Moon and Wish You Were Here, illustrating the process of mental deterioration is a mission to which progressive rock’s divergent flights of fancy can ably lend itself. Volta’s 2003 debut hinges on a conceptual character whose story mirrors that of their late friend Julio Venegas. Following a drug overdose, Venegas entered a coma for a number of years, before ultimately awaking and sadly taking his own life. The album, thematically and musically, conveys the internal struggle of a similarly comatose protagonist, Cerpin Taxt, and dives headfirst into a near-psychedelic maelstrom, halfway between existence and oblivion.

Rejecting conventional songwriting, this new band’s sound was assembled from a disparate tapestry of genres, sonics and moods. From the opening death-drive of Inertiatic ESP and the turbulence of Roulette Dares (The Haunt Of) to the shimmering, opiated lament of Televators and the disordered convulsion of the 12-minute, John Frusciante-guesting epic Cicatriz ESP, the Mars Volta’s unhinged musical universe features elements of metal, jazz and Latin, melted down and reforged into a listening experience as unforgettable as it is uncompromising. 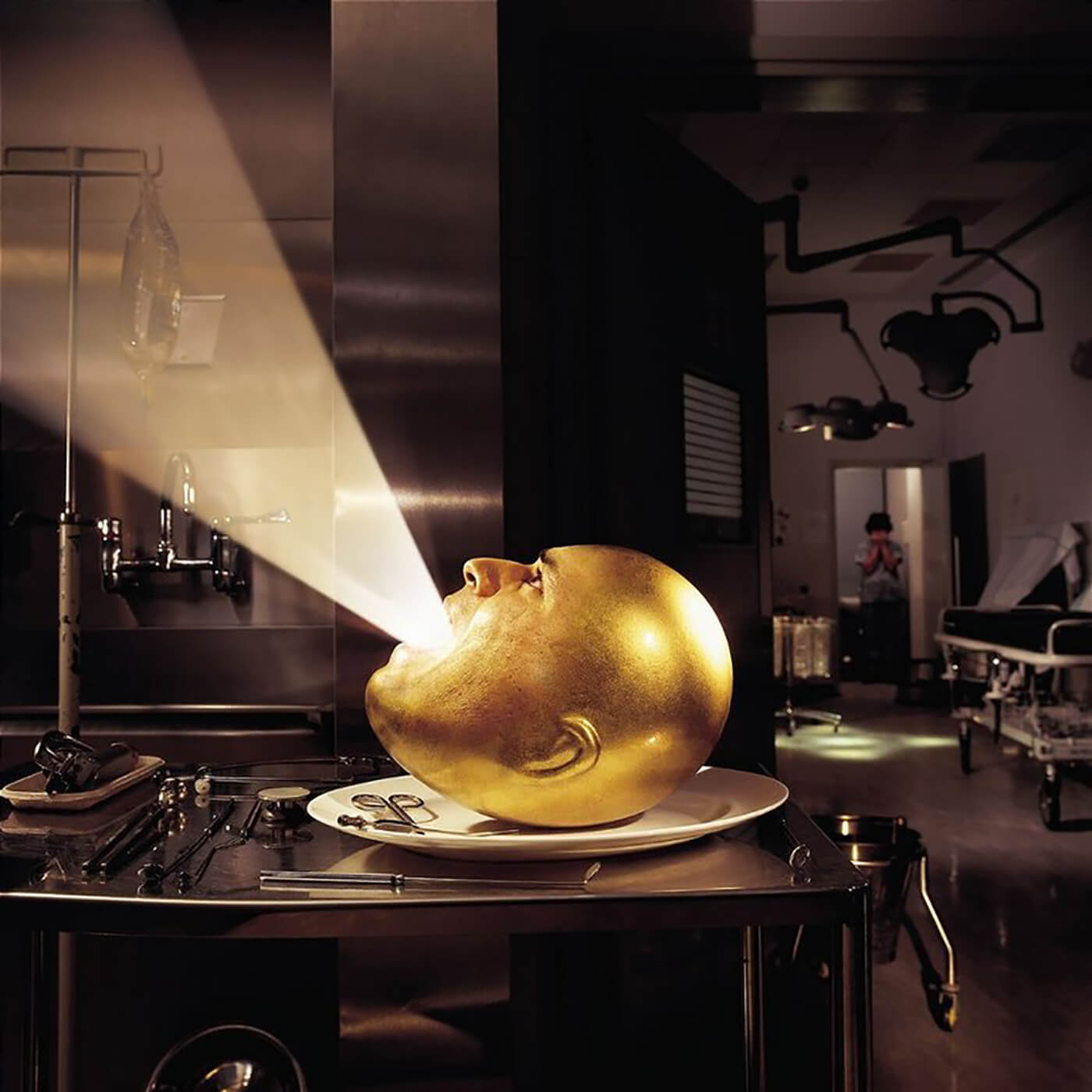 A spirit that spits

Working with Rick Rubin at his Laurel Canyon-based Mansion studio, the band’s conceptual objectives crystallised as the duo-led troupe began expanding on their initial compositions. “Writing a song is the easiest part; you can do that in your sleep,” Rodríguez-López would tell Clash magazine. “But challenging yourself to go further and further and further, that’s what takes will and exercise.”

Go further is just what they did. With Flea guesting on bass and the masterful drumming of Jon Theodore setting the pace, Rodríguez-López and Bixler-Zavala drew the threads of the record together.

Writing with his Ibanez AX120 Custom, Rodríguez-López wrenched a multitude of colours from his increasingly expanding pedalboard, which would eventually be regarded as one of the world’s largest. Blending the likes of EHX’s Small Stone phaser and Small Clone chorus with a Boss DD-3 and Line 6 FM4 Filter Modulator, as well as the characterful sweep of a Dunlop Bass Crybaby, Rodríguez-López’s guitar takes on an ever-morphing role on De-Loused.

Speaking to Mix Online in 2003, Dave Schiffman, the engineer behind De-Loused’s tracking, discussed the use amps throughout the recording process. “A large portion of the guitar sounds came from an amazing Supro amp, a Fender Princeton, and a very small Fender Tweed,” he said. “We also used a Fender Super Reverb and a Vox AC30 for some songs.”

While there are a handful of moments that nod to more conventional chord and riff-craft – the restraint of the arpeggiated Televators and the near-romantic sway of Eriatarka, for example – for the most part the guitar is a violent, unbalanced presence. Take the punch and thrust of the relentless Drunkship of Lanterns, for instance. While Bixler-Zavala oscillates between hushed on-edge paranoia and shrieking mania, Rodríguez-López’s guitar lurches from tight, danceable funk-frolic into a halting Fmaj7♭5 chord, punctuating the intersection between the verse and the thoughtless note-shedding of the chorus section. All the while, the arrangement is nagged by the insistent buzz of fuzzy micro-riffs and phased chord sweeps. It’s an aural descent into lunacy and a mesmerising reflection of Taxt’s mental state.

The frost of silence

Rodríguez-López crafted the overall structure and arrangement of the record’s 10 tracks, leaving ample space for improvisation and spontaneous reactions. “Everything for this recording was pretty much laid out before any recording began,” Rodríguez-López told Thenitmusbetrue.com. “Certain parts of the album have been left open for expression, so they’re always a little different when we play them live. But even the improvising is structured to a certain degree, because you know it’s coming.”

De-Loused in the Comatorium is not a record full of immaculately written songs. It’s a freeform explosion of music-as-living-entity rather than an exhibition of orthodox musicology. Throughout its hour-long runtime, Rodríguez-López’s guitar wanders off on odd tangents (Inertiatic ESP), his leads squeal in harrowing fashion (This Apparatus Must Be Unearthed), and chords poke and prod, jumping key and incorporating dissonant notes that pain the musical structures (Cicatriz ESP, Drunkship of Lanterns). Yet, the Mars Volta’s still-captivating debut is one of the best examples of using the instrument as a sonic paintbrush. Marked by tremolo-picked scratches, riff-dominated bedlam, and haunting, swelling undercurrents, with De-Loused, The Mars Volta birthed one of the definitive catalogues of a human mind’s disintegration.

The Mars Volta, De-Loused in the Comatorium (GSL/Universal, 2003)