The Genius Of… El Camino by The Black Keys

After the success of 2010’s gritty blues masterclass Brothers, The Black Keys ripped it up and started again on the genre-straddling follow-up, becoming one of the biggest bands on the planet in the process.

After a decade of grinding incremental growth, two albums released 19 months apart changed everything for The Black Keys. Brothers arrived in May 2010 and El Camino the following December, selling over three million copies between them as the duo took home a staggering seven Grammy Awards. Yet between these two sibling records, Dan Auerbach and Patrick Carney underwent a sonic reinvention.

Recorded at Alabama’s legendary Muscle Shoals, Brothers was a lovingly stocked time capsule, a weathered and fleetingly psychedelic embodiment of Auerbach’s lifelong studies of the blues. Having schooled himself on footage of revered masters such as Junior Kimbrough, RL Burnside, Fred McDowell and Lightnin’ Hopkins and become one of his generation’s most respectful and respected musical archaeologists, on El Camino Auerbach was determined to stretch out. “Everybody thinks we’re a blues band,” he told the New York Times. “Pat hates blues music, and I haven’t listened to a blues record in a long time.”

The route to the sleekly irresistible sound of El Camino was signposted by Brothers’ lead single, the sultry F♯ minor groove Tighten Up. Produced by Brian Burton, aka Danger Mouse, who had helmed 2008’s Attack & Release album, it was the band’s first big radio hit. When the Keys cancelled a string of European shows citing exhaustion, Burton was invited back as a co-writer on El Camino. It was a pivotal decision.

Having struggled to recreate Brothers’ swampy tempos in the live arena, upon arrival at Auerbach’s newly built Nashville studio Easy Eye Sound, The Black Keys upped the tempo. El Camino comes in 20 minutes shorter than its predecessor, donning its dancing shoes from the first snarling open E. “We were just trying to make a guitar rock album that was more upbeat than anything we’ve ever recorded,” reflected Carney years later.

Asked how he and Carney shaped such a visceral and polychromatic record from a collection of seemingly unconnected influences, Auerbach was typically taciturn, claiming it was: “Nothing out of the ordinary. No trickery, just a guitar, some pedals and some amps.”

As factually accurate as that statement may be, it’s a flagrant underplaying of the cache of delectable instruments Auerbach, an avid collector of vintage curious, deployed on El Camino and its subsequent tour. His primary electric on the album is a 1953 Gibson Les Paul, alongside a ’58 Strat, a Harmony Stratotone, a fibreglass-bodied Supro Martinique, a 1960s Danelectro and a Gibson J-160E.

While, on the tour, Auerbach would harness the combined firepower of a Marshall JTM45, Fender Quad Reverb and Victoria Double Deluxe Tweed, at Easy Eye Sound he was all about driving small amps to breaking point. El Camino sizzles to the sound of a diminutive 1×10 Magnatone, Auerbach also using an old Ampeg combo with a partially blown JBL D130 –listen closely and you’ll hear the speaker’s death rattle introducing bristling lead single Lonely Boy.

Unlike Brothers, which was written ahead of checking into Muscle Shoals, for El Camino The Black Keys arrived empty-handed, Burton convincing Auerbach to fit his words to the arrangements, a decision the singer later described as writing “in reverse”. At 41 days, it was the longest time the band had taken over any album. They also recorded without a click, Carney’s elastic tempos and intuitive playing imbuing El Camino with “that human element, that live feel”.

“Seeing how big the shows were getting, feeling like people were paying attention, kind of made me anxious, and I think that’s part of the reason the songs are so fast. I think we wanted to just muscle through it,” the drummer told the New York Times. 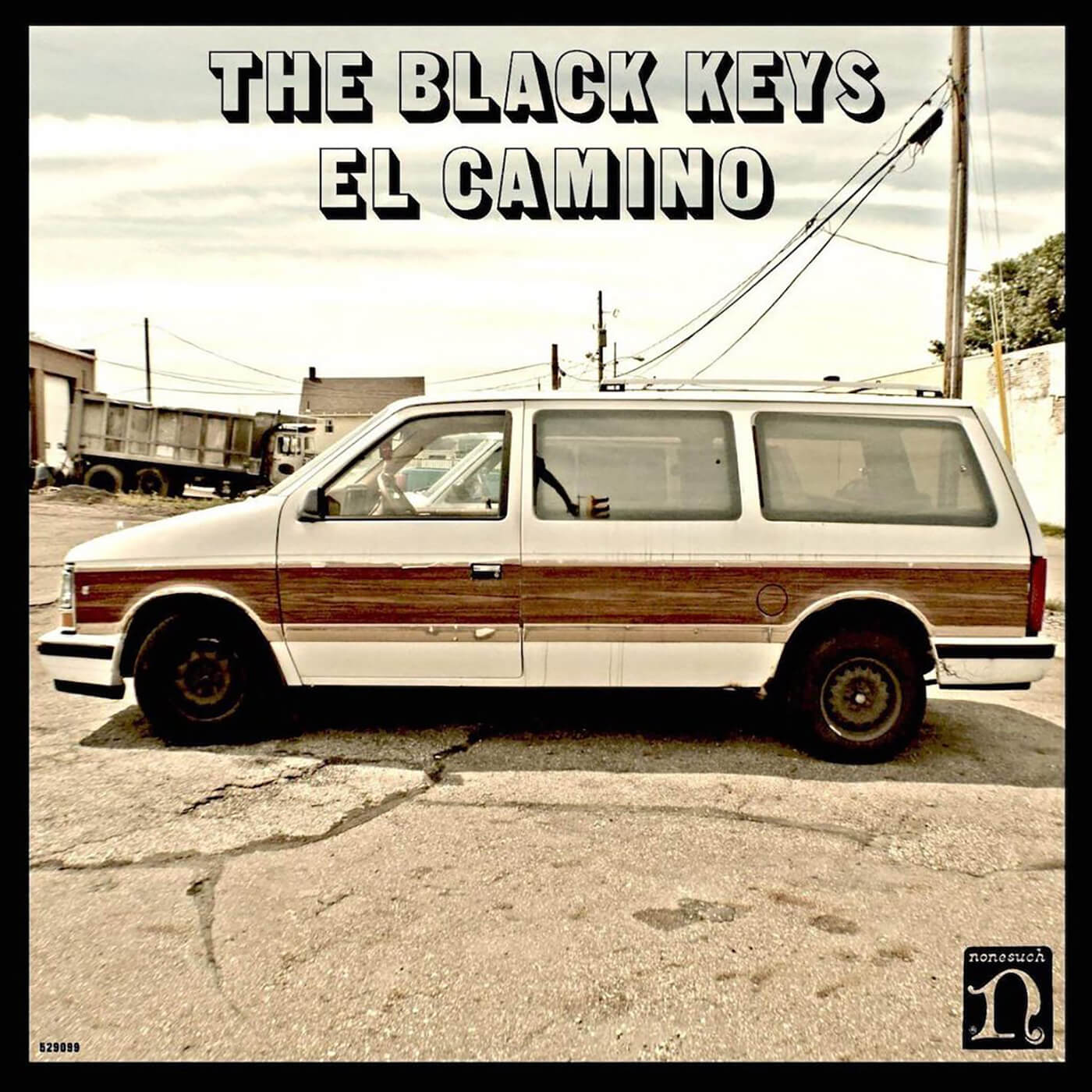 Engines revved, El Camino roars away from the lights at a frenetic pace. Lonely Boy has one of the most thrilling intros in modern rock, Auerbach using a pitch shifter to send his sixth string plunging down an octave. Keeping the pedal to the metal, he careers into an offbeat riff based around the E minor pentatonic scale, ascending through E/G/A7 chords and singing wistfully of a “love that keeps me waiting”.

Carney accelerates the drum pattern from The Stone Roses’ I Am The Resurrection as heavenly gang vocals surround Auerbach on Dead And Gone, Motown handclaps recorded in the studio bathroom and grinding fuzz bass giving way to a feral buzz-saw solo. The strutting glam of Gold On The Ceiling reinvents Norman Greenbaum’s Spirit In The Sky, while Run Right Back’s devilish descending riff nods its head, and strokes its beard, to ZZ Top.

It’s only on the Zep-saluting Little Black Submarines that the pace eases momentarily. Auerbach’s lonely Travis-picked Am/G/D/E progression on his 1930s Dobro spider-bridge resonator and the ghostly whistle of Burton’s organ brood mournfully for two minutes, as the singer ponders “Oh, can it be? The voices calling me, They get lost and out of time”. Suddenly, Auerbach awakens from his torpor and straps on an electric as the song rears up for a devastating second half. The lustrous overdriven chords are overtaken by screaming unison bends and a seismic solo in the style of Jimmy Page, vibed around the A minor pentatonic scale, Carney responding with an avalanche of muscular Bonham-esque fills.

The riff fest continues, Auerbach’s clarion falsetto escorted by sonic thunder wrung from a line-up of vintage fuzzes including his Shin-ei Companion and Marshall Supa Fuzz. He even breaks out a Dunlop Talk Box on the primal stomp Money Maker. The syncopated chords and easy groove on Sister recall The Rolling Stones’ Miss You, presaging the soulful slinkiness of 2014 album Turn Blue, while the reggae-rooted Hell Of A Season is indebted heavily to The Clash, Auerbach wrapping up with a fiery glissando solo.

Having displayed the breadth of their musical chops, The Black Keys conclude with a reminder of their blues heritage on Mind Eraser. After a luxuriously modulated solo that leaves us hungry for more, Auerbach exits stage left, pleading “Oh, don’t let it be over”.

The dawn of greatness

In the wake of the breakout success of Brothers, executing such a stylistic handbrake turn on the follow-up could have represented career suicide, yet Auerbach and Carney were undaunted. Initially refusing to upload El Camino to streaming services, they opted to release the album in December, historically a music industry graveyard. The message was clear – having worked so long and hard to get to this point, The Black Keys were going to do things their own way.

The defiantly anti-commercial approach worked a treat as El Camino ram-raided the Billboard Chart, crashing in at No.2. Rolling Stone’s Will Hermes lavished praise on: “the Keys’ grandest pop gesture yet”. Michael Hann’s five-star review in The Guardian raved: “They sound like a band who think they’ve made the year’s best rock ’n’ roll album, probably because that’s exactly what they’ve done”, while Uncut’s Graeme Thomson concluded: “The Black Keys have not only outlasted their more celebrated peers but outstripped their own past achievements. El Camino feels like the dawn of greatness.”

That final statement was perhaps wide of the mark. While the radiant, soulful sonics of The Black Keys’ seventh album bled into their next two – Turn Blue and Let’s Rock – it’s yet to be eclipsed, outselling everything before and since, shifting more than two million copies in the US alone and elevating the duo to arena stages.

A celebratory show at New York’s Madison Square Garden in March 2012 sold out in 15 minutes and the El Camino tour unfurled across 129 dates, selling $12.7 million of tickets along the way. Ten years after uniting in a basement in Akron, Ohio, Dan Auerbach and Patrick Carney had seemingly overnight become one of the biggest bands on the planet. Auerbach’s verdict was characteristically brusque, however. When asked to reflect on the band’s most refulgent and successful release, he concluded: “It isn’t my favourite record. I much prefer Brothers.”

The Black Keys will release a special tenth anniversary El Camino via Nonesuch Records on 5 November. To find out more, click here.