The Genius Of… Origin of Symmetry by Muse

Demonstrating gigantic ambition and a musical finesse that would lead the trio to global ascendancy, Origin of Symmetry was a compelling mission statement, and one which brought Matt Bellamy’s ingenious guitar approach to the fore. 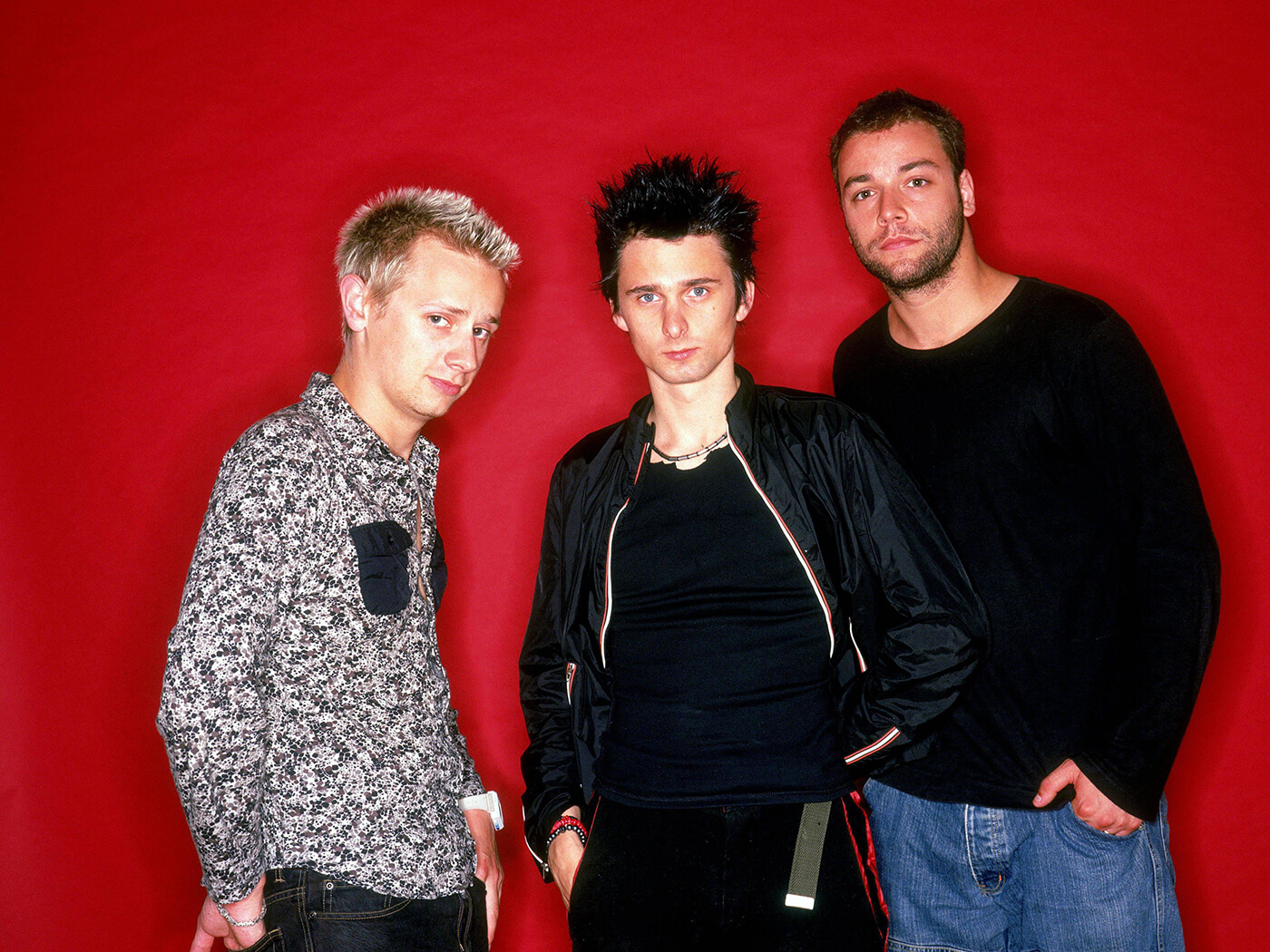 The breathtaking spectacle of Muse’s 2019 Simulation Theory tour, replete with two stage wings, catwalks, huge LED screens, dancers, and even a towering inflatable puppet is indicative of the scale of the Devon-hailing trio’s success. In the 22 years since their uncertain, angst-ridden debut, Showbiz (1999), Muse’s concerns have widened considerably. Dip anywhere into the band’s seven successive records and you’ll typically find yourself immersed in nightmarish dystopian visions, state mind-control, the second law of thermodynamics or virtual reality, usually married to effect-saturated, idiosyncratic arrangements. Though many of Muse’s more ostentatious recent records have been divisive, the band’s international fame and ever-swelling fanbase attest to a formula that works.

Muse’s gargantuan ambitions were first clearly revealed on 2001’s Origin of Symmetry, their second record following the muted and somewhat confused reception that met their debut. Contemporary reviews of 1999’s Showbiz heavily emphasised Matt Bellamy’s vocal similarity to Thom Yorke, and were hasty to write them off as Radiohead-wannabes (a perception underlined by the fact it was helmed by The Bends producer, John Leckie).

Critical uncertainty aside, Showbiz sold moderately well and, for many of those who listened, the debut’s grounding in small-town malaise and hormonal obsession was relatable while others recognised the precocious talent of the 21-year-old Bellamy as both inventive guitarist and virtuoso pianist. A mere two years on, Muse re-emerged with both a sharper focus – and sharper teeth.

On the heels of extensive touring, Bellamy, along with bassist Chris Wolstenholme and drummer Dominic Howard, decided to record a batch of new tracks with Tool producer Dave Bottrill, namely a song that the band had been performing live for a while. This growing favourite was driven by a propulsive, classically-inspired riff. The productivity of these sessions would result in – as the band would later state – the backbone of their second record.

A newly discovered appetite for magic mushrooms had swerved Bellamy’s songwriting into more vivid directions, and Plug In Baby’s lyrics abstractly alluded to both sex toys and a futuristic vision of computerised, synthetic love. When pressed on the song’s meaning in an interview with Channel [V] HQ’s James Mathieson in 2004, Bellamy muddied the waters further; “It’s all random, it just comes out, I’ve got no idea what I’m singing about at all, It does mean something! Trust me. But I can’t work it out myself. ‘Cause I’m subjective, you see. So I can’t actually quite work it out, that’s for you lot to work out.”

Plug In Baby was undoubtedly the strongest piece of music that Muse had written to date. Bellamy’s centrepiece riff feverishly jogged around the B minor harmonic scale with a fluidity that spotlighted his burgeoning guitar hero potential, snapped to a solid, funky rhythm section provided by Wolstenholme and Howard. The band’s regular wallowing in heartbroken angst had taken a hard right turn into sci-fi surrealism. It was a tantalising portent of what was to come.

During the sessions with Bottrill, the band laid down three more new tracks, two of which would grow into further singles – and setlist staples for the ensuing decade. The transcendent Bliss and ambitious album opener New Born alongside the moody Darkshines. The band set up live to capture the intensity of their live performances raw, overdubbing additional parts later in the process.

Though the bedrock of four of the album’s key tracks were down, Bottrill wasn’t charged with finalising the record, leaving due to a commitment to helm Tool’s Lateralus. Once more, Muse sought the wisdom of John Leckie to see through the remainder of album number two. As time was on their side, and facing considerably less label pressure following the relative success of Showbiz, The rest of the material was worked up and captured at a range of studios. The band returned to Sawmills studio in Fowey, Cornwall, ventured out to Ridge Farm Studios in Surrey before jaunting across to Real World Studios in Box, Wiltshire. On their travels, a brief spell was also spent aboard Dave Gilmour’s Astoria houseboat studio, moored on the Thames. 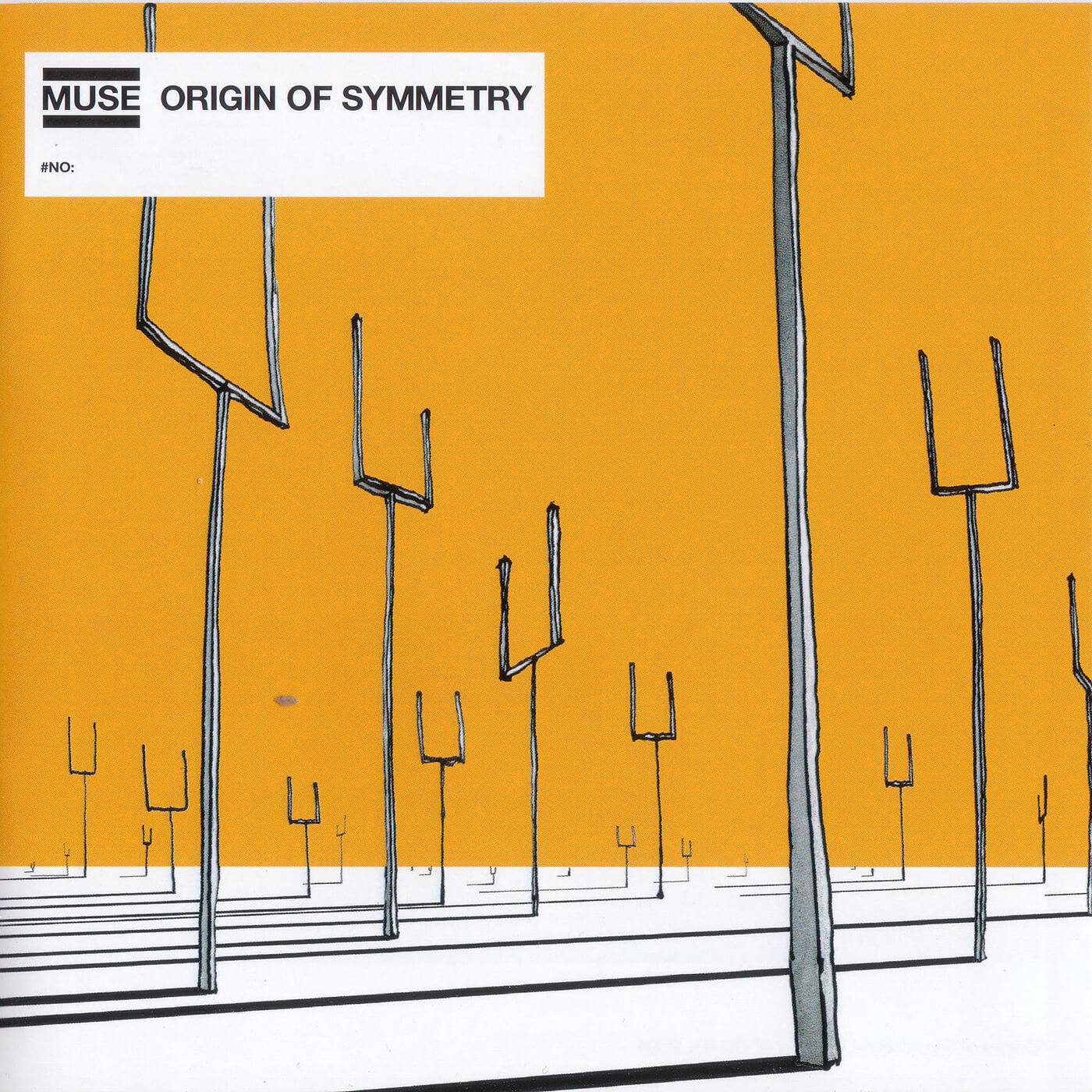 Bellamy’s guitar arsenal was considerably smaller in 2001, with his main guitar of the Showbiz-era being a slimline double-cut Gibson Les-Paul which included a Roland MIDI pickup. Unfortunately, due to a particularly exuberant show in Dublin in 2000, this guitar was no longer workable. With a little cash in his wallet – Bellamy sought a new guitar that merged two different worlds in one unique shape, as he told Guitar.com in an interview last year: “I was torn between an SG and the Telecaster-type shape, feel, sound and everything. Those Fender-type sounds can be too thin to fill the space in a three-piece band. Having said that, I don’t play powerchords that much – I try to play lead parts or single note parts a lot, so you need a sound that’s thick in tone and broad, and not plinky and thin.”

Sketching a rough concept, Bellamy sought out the respected Exeter-based luthier Hugh Manson to realise his vision, as Manson recalled in Total Guitar “Matt came to the shop and asked me to make a guitar for him. He had a definite idea of what he wanted it to sound like. We reached the body design through a combination of me drawing and him pointing and we got there pretty quickly, I think there was just a slight alteration on the top horn.” Bellamy’s new axe, the DL-1 (dubbed ‘The Delorean’) was clad in aluminium on the front, back and sides and sported a spectrum of pickups, with a Seymour Duncan P90 in the neck and a Kent Armstrong Motherbucker at the bridge with a Roland GK2a MIDI pickup. The Delorean was also equipped with an in-built Z.Vex Fuzz Factory.

Now brandishing a guitar tailor-made for effervescent sonics, coupled with a new spiked-up hairstyle, Bellamy was carving a distinctive silhouette. The Delorean marked the beginning of an ongoing, fruitful partnership with Manson, which culminated in 2019, when Bellamy became the majority shareholder of Manson Guitar Works.

Befitting Bellamy’s sparkly space-age rig, were some astounding new songs. As the Origin of Symmetry sessions continued, tracks such as the explosive electro-funk of Hyper-Music, the schizoid mania of Space Dementia and sublime album centrepiece, Citizen Erased, were revealing that the record would be both louder and more texturally adventurous.

Bellamy’s penchant for riff-craft fully flowered during the making of the Origin…, with the aforementioned album opener New Born dramatically lurching from an esoteric piano arrangement into a dirty but massively infectious riff. When released as a single, the potency of New Born’s fuzzed up riffing caught the ears of many youngsters then in-thrall to in-vogue heft of nu-metal. It was now a clear statement of fact that the Teignmouth three-piece could now stand shoulder-to-shoulder with some of the loudest bands in the world.

Fuzz Factory-soaked riffs aside, the range of Bellamy’s mastery of the guitar was illustrated; The twinkly, emotive arpeggios at the heart of Citizen Erased’s multi-section arrangement were precise and subtle. Recalling the building of this fan favourite behemoth, Bellamy remembered, in Guitarist magazine, that “Dom came in one day with this funky James Brown beat and Chris just started playing along. I then applied the chord structure that I already had and it suddenly became a full-on metal track out of nowhere. Because it was so heavy for so long we decided to add another song on to the end of it.”

Elsewhere, the delicate Spanish-tinged acoustics of the gloomy Screenager displayed a restrained nuance, while the euphoric power-chord pound of Bliss, helped to shape it into, as was later determined by Bellamy, as “Probably the most positive track – the most truly embracing song. It’s almost in awe of the situation I’ve been given, because it’s a state of mind where you give out everything you have without any need for return.” (Rock Sound, 2001)

Though the guitar – and Bellamy’s acrobatic vocals – were omnipresent on the record, Muse were also keen to not be easily pigeon-holed as a straightforward rock outfit, Bliss’s pulsing synth arpeggios are just as prominent in the mix as the guitar, while Bellamy’s pianistic expertise rippled throughout – leading the charge as the primary instrument on Space Dementia. For the record’s biblical closer, Megalomania, Bellamy harnessed a church organ while the band were situated at Real World Studios, making a trip to a church at the nearby city of Bath to record it, and inject a sense of lofty, deity-challenging might to the album’s finale.

A new game to play

Muse’s newly forged sonic scale was matched by some fairly immense existential concerns. Bellamy was absorbed by the book Hyperspace: A Scientific Odyssey by Michio Kaku, a book which highlighted the scientific necessity to seek out an ‘Origin of Symmetry’ to answer the next largest existential question following on from Darwin’s On The Origin of Species. As well as the obvious borrowing of the title, lyrical allusions to symmetry, control and oppressive order amidst a quasi-dystopian landscape permeate the eleven tracks. Getting dumped outside a pub in Teignmouth, this was not.

Released on June 18th 2001, Origin of Symmetry was greeted with near-universal acclaim, with many heaping plaudits upon the band’s loftier scope. Bestowing a 9/10 score in NME, Roger Morton said “Their reinvention of grunge as a neo-classical, high gothic future rock, full of flambéed pianolas and white-knuckle electric camp is a precarious venture. Yet, as the bloody abattoir riff kicks in on New Born, colliding with Bellamy’s fairy dreamtime piano, it’s apparent that Muse can handle their brutal arias.” Drowned in Sound’s Sean Adams claimed “Your record collection needs this record as much as you do. That goes for you! Yeah, yeah YOU! The one giggling in the corner, because even if you didn’t quite get Muse the first time, they’ll eat you up with this one.”

Hitting number three in the UK album chart, the record fixed the band firmly into the public consciousness. Appearing live across many of Britain’s weekly chart shows, Muse’s distinct and polished brand of 21st century sci-fi rock, coupled with the punkish unpredictability of their performances (track down Muse’s Top of the Pops performance of New Born to see more) was spellbinding.

Though a label dispute meant the record was not released in the US until 2005, following the success of 2003’s Absolution, Origin of Symmetry would be widely regarded as the record that shaped Muse’s future. It established the trio as purveyors of both wildly adventurous, yet also hugely popular music. Muse have trodden this careful tightrope between bombastic excess and ear-catching pop ever since, filing numerous arenas in the process.

Though the band’s more recent works have found Muse pushing their ambitions to a place that some consider the height of pretension, it’s undeniable that the enduring identity of Muse was cemented during the making of Origin of Symmetry. Its epic scope, thrilling music and emotional intensity mean that – after twenty years – Origin… is as fresh a listen as the day it was birthed.