It might be named after a heavy artillery weapon, but this 15W amplifier is no bigger than the average stompbox. Can it really replace a full-size valve head? 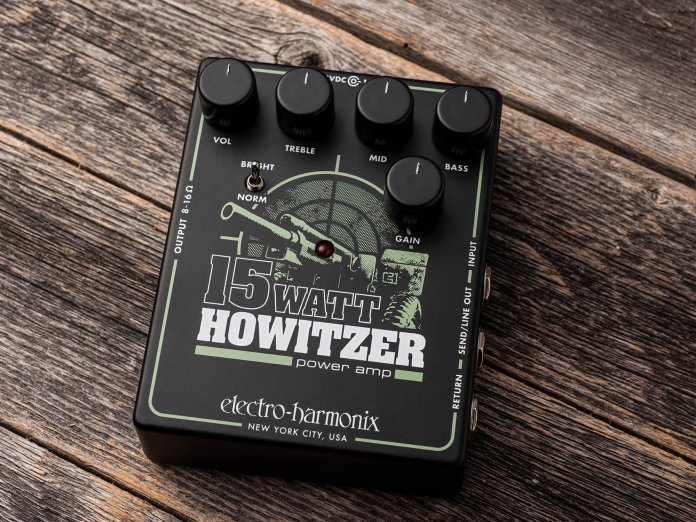 Pocket-sized ‘silent amps’ with in-built cabinet simulation are great, but they lack one thing: the sheer power, immediacy and possible permanent hearing damage you can only enjoy by standing in front of real, flapping speakers. And that’s where pedalboard power amps come in.

Actually, calling the Electro-Harmonix 15Watt Howitzer a power amp is selling it short: there’s a preamp in there too, and all it needs to do its main job is a guitar plugged in at one end and a cab at the other. Add to that the extra possibilities opened up by an effects loop and a line output, and this starts to look like more than just an emergency gig-saver for when your ‘real’ amplifier blows up.

Now, do you remember our review of the Electro-Harmonix 44 Magnum Power Amp? Course you do, it was only 12 years ago. This model has barely a third of the power of that tiny powerhouse, but that’s not necessarily a bad thing – and what it has instead, in addition to the same bright/normal switch, is a three-way EQ section. That should make it much easier to match up to different guitars (and cabs) for tonal balance.

The ability to take a line out from the preamp also means it can be used for direct recording, with your favourite software providing the speaker simulation; and if you already have a particularly tasty tone-shaping preamp, you can send it straight to the Howitzer’s power amp by plugging into the effects return instead of the main input. 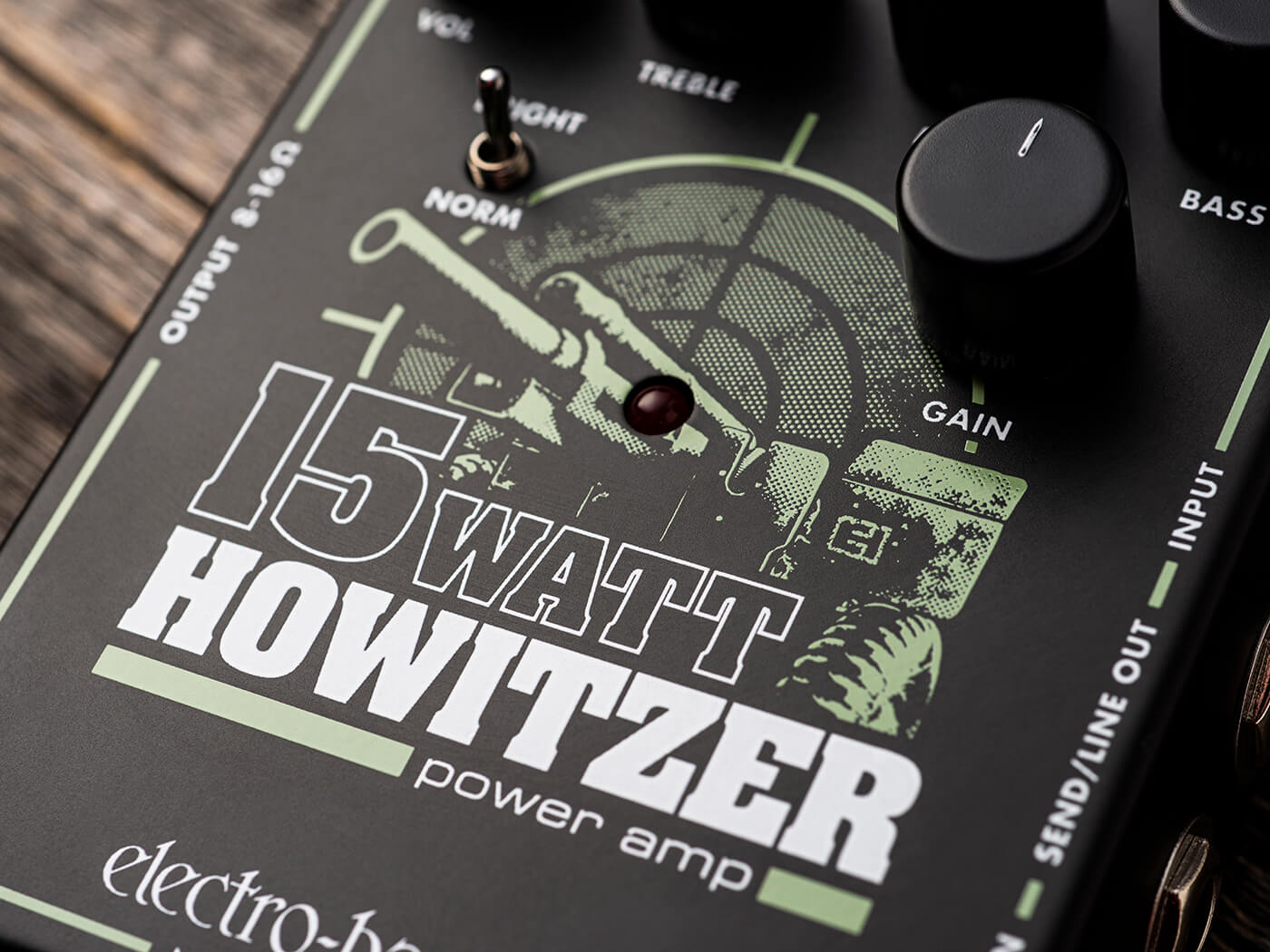 First of all, we need to make sure this thing is connected to an 8-ohm or 16-ohm cabinet – using a proper speaker cable – before we even plug it into the mains. A warning in the manual makes that clear; a power switch on the unit would have made it easier.

Anyway, down to business. If anything, the name ‘Howitzer’ is even more macho than ‘Magnum’ – so you might expect this to be a snarling, fire-breathing box of pure, leather-trousered rock… but it isn’t. In fact, it’s something of a sweetheart.

Sitting between a Telecaster and a single Celestion Creamback, it stays clean pretty much all the way up to halfway on the gain control – and gives us the kind of thick, stretchy tone you might associate with Nashville country picking. There is some muck to be found at higher gain settings, but nothing extreme and certainly nothing ragged – and yes, it gets plenty loud for most modern needs. Note that, despite the flexibility of the three-knob tonestack, you’ll almost certainly want to use the bright switch with humbuckers.

Is this as much fun as a top-class valve amp? No, but it’s really not far off – and it’s worth pointing out that the noisefloor is low to the point that we had a couple of genuine “Is this thing on?” moments. It also gets on really well with dirt pedals, while the effects loop works impeccably.

Using the send for direct recording produces solid results – just remember you still need to have the main output plugged into a cabinet. If you want to record in silence you can simply set the output volume to zero, as this doesn’t effect the level of the line-out signal.

EHX’s suggestion to bypass the preamp and use the Howitzer as a pure power amp seems less useful. It sounds awfully dull unless you’re feeding it with something very fizzy indeed, and you can’t correct that with the tone controls because they’re on the preamp circuit.

That aside, this is a simple yet surprisingly refined tool for any situation that calls for nicely balanced amp tones but doesn’t call for a noise abatement order. 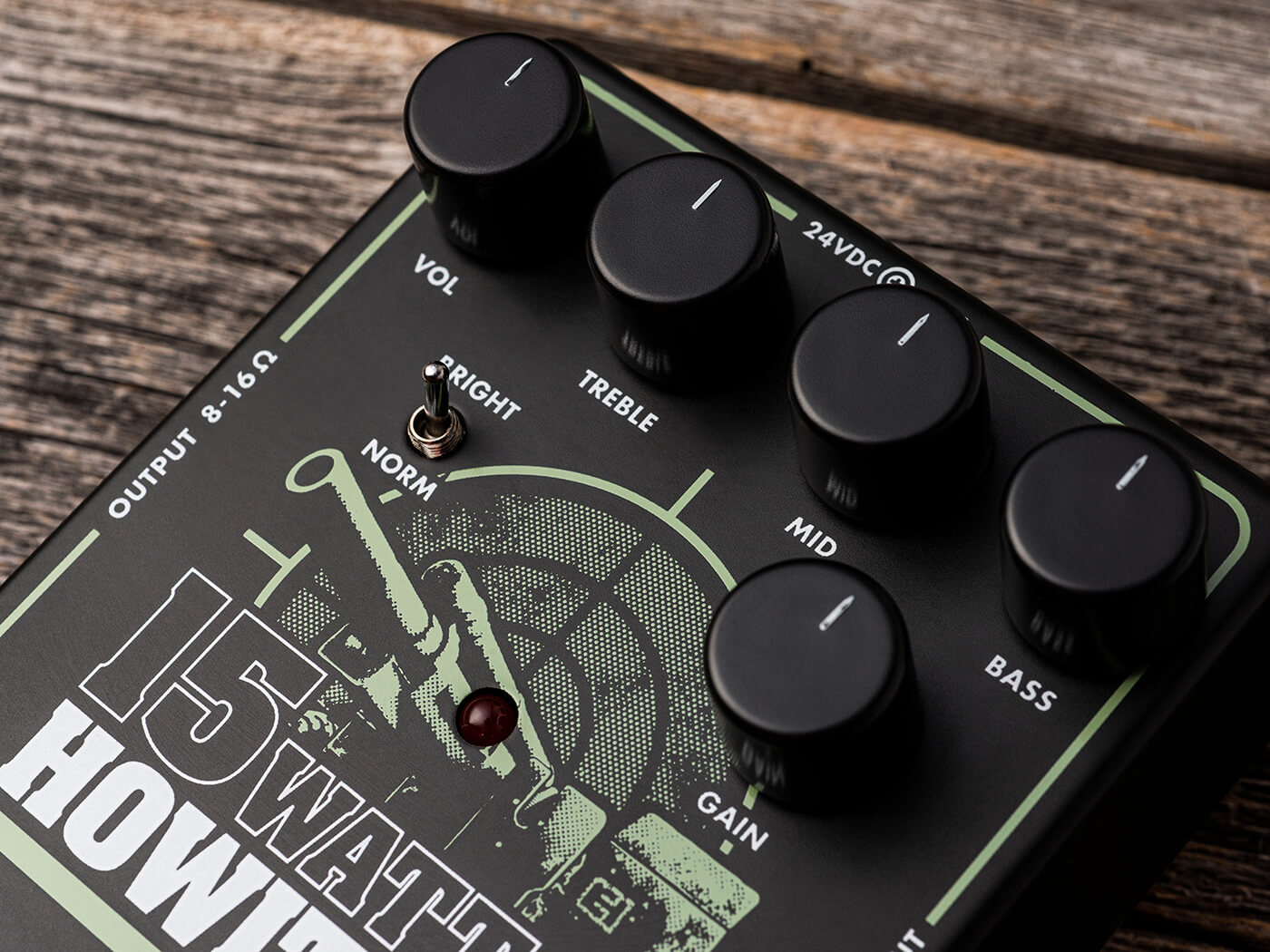