These hefty chunks of engineering have been launched in honour of two very different artists in Billy Gibbons and Jerry Cantrell, but they both have the same job: to help you rock like a mutha. 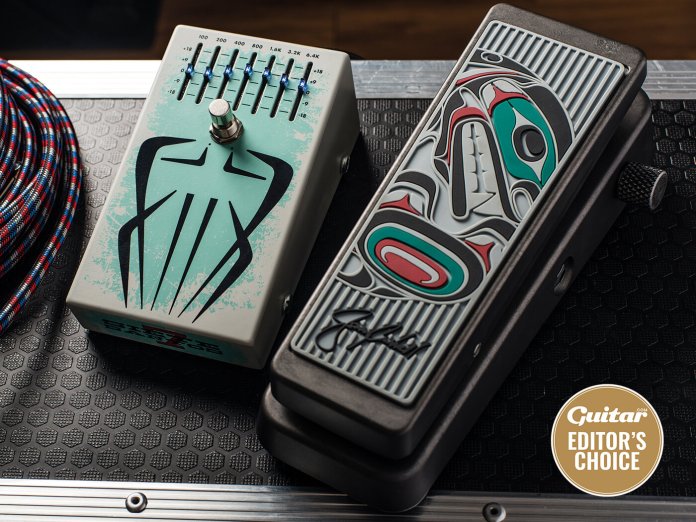 Jim Dunlop Sr may have left us in February, but the company he founded back in 1965 rolls on – and these two latest stompers provide a handy snapshot of the brand’s broad appeal in 2019. One is an octave fuzz with seven-band EQ created for boogie-blues beardsman Billy Gibbons of ZZ Top; the other is a restyled wah for Jerry Cantrell of Seattle grunge-metal sloggers Alice In Chains.

Billy’s pedalboard has been known to feature both a Dunlop Octavio and a Boss GE-7 Equalizer; the Siete Santos puts both functions in one enclosure. It’s a large wedge-shaped box that takes its main design cues from the all-white Octavio, itself based on the Roger Mayer device made famous by Jimi Hendrix. The sockets and knobs are all round the back, with the footswitch about as high up the top surface as the added EQ sliders allow. These offer up to 18dB of cut or boost on each frequency, and have handy LED markers.
Cantrell wasn’t even born when Dunlop started out, but his signature Cry Baby has been around for almost a decade now. This new version – limited to 500 units – has the same innards, but with a new ‘industrial chic’ paint job and, on the treadle, an image of Jerry’s finest tribal tattoo.

‘Siete Santos’ means ‘seven saints’ – but there ain’t nothin’ saintly about this thing. With fuzz cranked to full and all the EQ sliders zeroed at their centre notches, it roars into action with a rasping, riotously oversaturated blast of uncompromising noise. This is the fuzz effect as it was before people learned how to tame it. The upper octave only really makes itself heard above the 12th fret, but when it does arrive, it’s pure Purple Haze.

Minimising the fuzz hardly turns this sonic gremlin into a house-trained beagle – in fact, it gets even more rough and ratty at lower gain levels, with chords losing much of their bottom end and single notes becoming more prone to spluttering out. You can even get some clanging ring-modulation sounds by playing pairs of notes at non-triad intervals.
There are no surprises with the EQ. Each of the seven sliders has its own, equally pronounced influence, and we can see two distinct uses for this part of the pedal: fine-tuning the top and/or bottom end for overall balance and pushing or scooping the mids for dramatically altered ‘feature’ sounds. It’s not an obvious partner for the fuzz, but it is a potentially creative one.

Arguably the worst thing about the Jerry Cantrell Cry Baby is the Alice In Chains lyric (from recent single Rainier Fog) printed on the baseplate. Turn it the right way up, though, and the fog clears quickly to reveal a very fine wah.

Dunlop describes the voice of the standard Cantrell model as “tight and punchy” and that’s certainly what we get here with the side-mounted knob – which sets the top of the frequency range in toe-down position – set to minimum. It’s about as ‘vocal’ as wahs get and that makes it hugely addictive.

What’s more, the ability to open up the top end means you can make those treble peaks just as pointy as you want – a genuinely welcome feature that, as soon as we’re put in charge of the world, will be made compulsory on all new wahs.