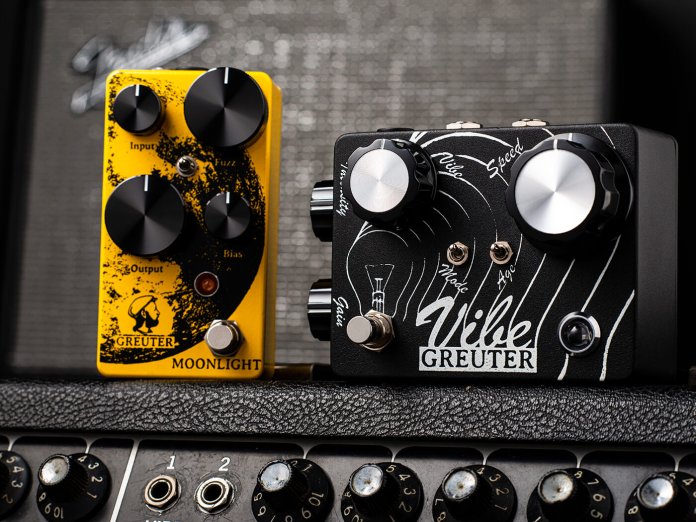 Like many boutique pedal-makers before him, Switzerland’s Sascha Greuter has been obsessed with sound and electronics since childhood. Years working in a guitar shop allowed Greuter unfettered access to rare and wonderful pedals but it was his experiences as a musician using these units in the heat of battle that informed what began as modifications and ultimately became a range of meticulously hand-made pedals under his own name.

The Moonlight is Sascha’s take on the well-trodden but famously cantankerous Fuzz Face circuit, while the Vibe his is spin on the Shin-ei Uni-Vibe. Both of Greuter’s hand-numbered enclosures feel dependably solid, with smooth potentiometers and positive, heavy-duty footswitches. While primarily inspired by vintage circuits, both pedals bristle with knobs and mini-toggle switches, offering levels of functionality and flexibility that the effects that inspired them never had.

For many years, boutique fuzz creators tended to concentrate on rarefied permutations of the Big Muff circuit but there is an increasing lean towards the nuanced, lower-gain expressive qualities of a vintage Fuzz Face. While the original design was almost insultingly simple with just volume and fuzz knobs and a footswitch, Greuter’s eye-catching yellow and black Moonlight doubles the knob count with additional input and bias controls surrounding a mini-toggle that allows three degrees of bass cut. 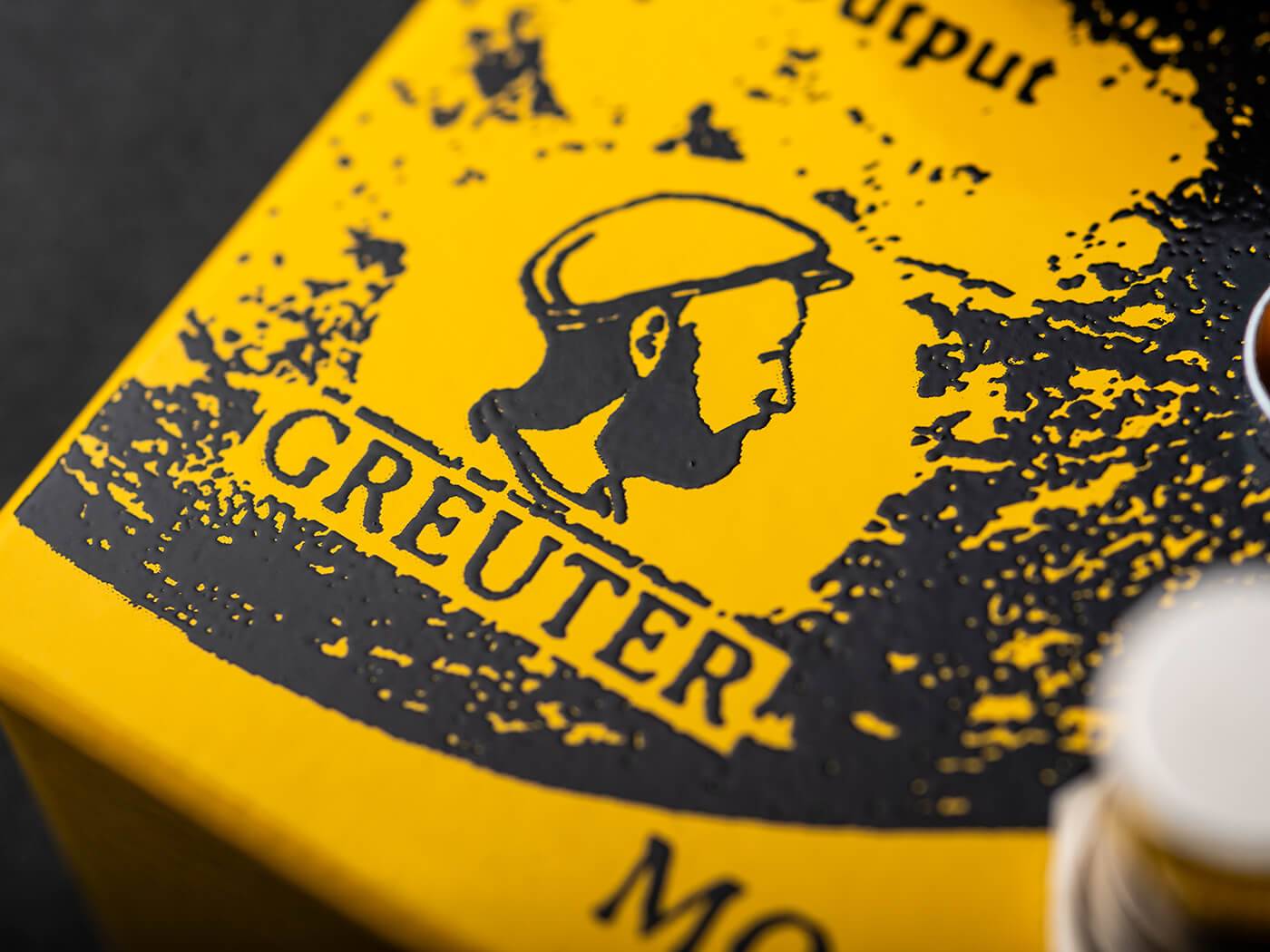 The Shin-ei Uni-Vibe was designed by Japanese audio engineer Fumio Mieda. A simulation of a Leslie rotating speaker’s doppler effect, it employed a light bulb and photoresistors to control a four-stage phaser and a unique LFO curve. It was not an immediate success but once the pedal fell into the hands of Jimi Hendrix all bets were off. The Uni-Vibe’s characteristic tectonic shudder quickly became a favourite of electric guitarists and it remains so to this day.

Straddling the modulated sweet spots of chorus and vibrato, the Uni-Vibe originally came with an external expression pedal, which is absent here as in many similarly updated designs. However, Greuter has improved on the circuit with the addition of vibe and speed knobs big enough to be tweaked with a casual toe, and twin mini-toggles. Mode switches between chorus and vibrato while ‘age’ switches between two input sections for a choice of vintage throb or modern shimmer. Also present are side-mounted controls for gain and intensity.

We begin our taste test with a Trussart Deluxe Steelcaster into an early Cornford Hurricane and the Moonlight parked at the front of the chain, as is the way with vintage-style fuzzboxes. Experience tells us to bump the Fuzz all the way up, with the remaining knobs at noon and the mini-toggle dressed to the left for full bass.

Kicking off with the bridge pickup we encounter a deliciously hairy overdrive with just a hint of sawtooth to keep it honest. It’s a pokey sound with bite at the front end of the note blossoming into a sustained rasp. Given the sensitivity of germanium components to temperature fluctuations it makes sense for Greuter to include a bias control. More than just a tone control, this knob governs a wide spectrum of timbral response with precision, from Baby Fuzzopotamus to Bearded Ladyland. 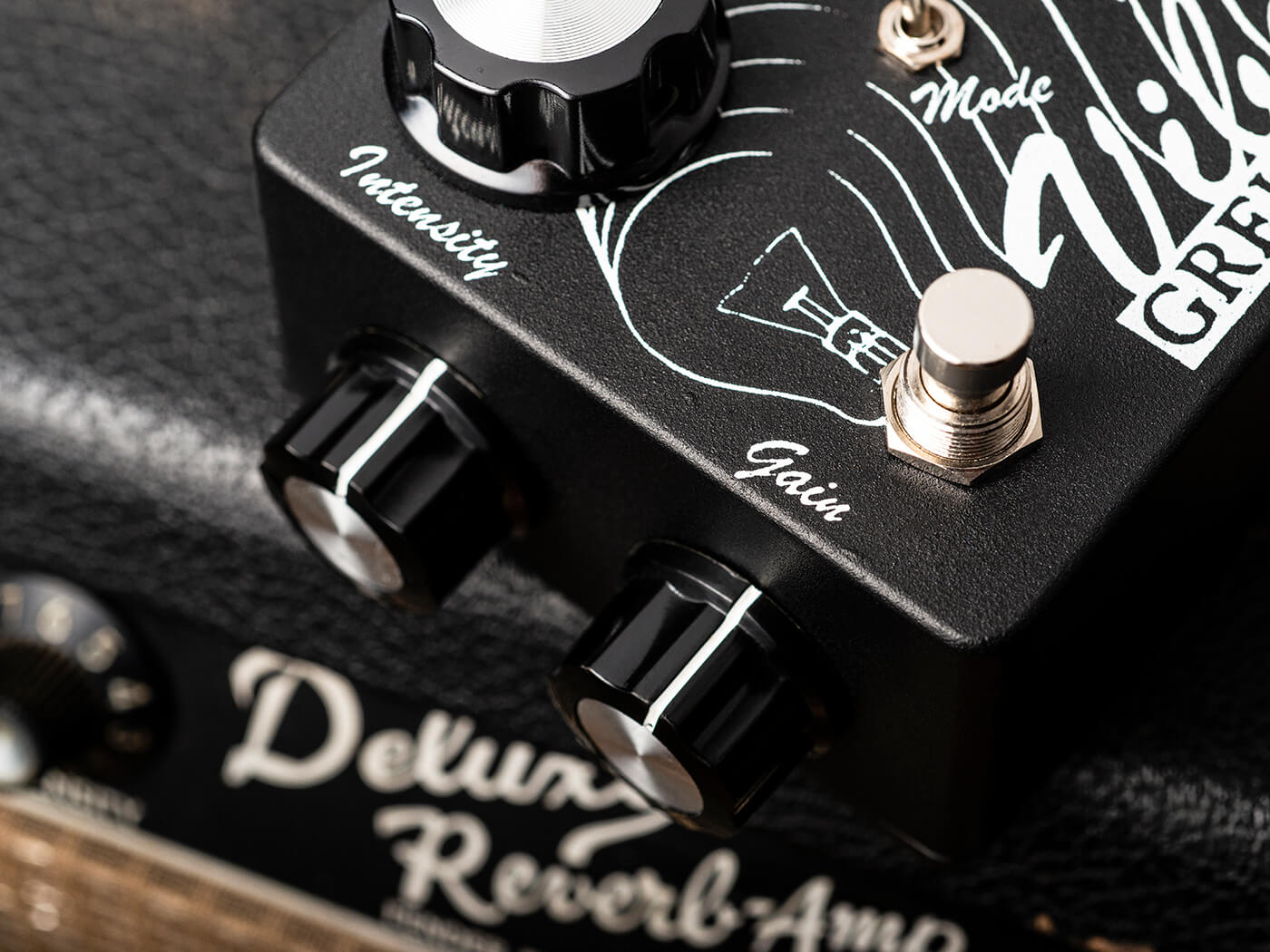 Switching through different pickups while dialling up the input adds a large helping of gain, taking the Moonlight firmly into more aggressive territory. A nudge on the output pushes the amp beautifully and enhances the snarling fuzz, but the guitar’s voice remains impressively present and focused throughout. This is some serious Moonlight.

Sliding the Vibe into our chain with the gain and intensity at halfway and the vibrato mode engaged gives a shimmering, sinuous movement to chord melody and double stops – especially when using both pickups. It’s a useable, evocative sound in its own right with a bit of grit as you turn up the gain. However, it’s the chorus voice of the Uni-Vibe that’s associated with classic recordings at the feet of players such as Jimi Hendrix, David Gilmour and Robin Trower, so doubtless this is where most such pedals will spend their lives.

Uni-Vibe can be a hard texture to get right as it can easily get watery – either too much chorus or too much phase – losing the gritty pulse of the real thing. Thankfully that is not the case here. The Greuter Vibe has much of the character of a vintage unit, especially with the age switched to the ‘old’ position and the gain pushed up. Then flick of that aforementioned age switch catapults us forward four decades to a modern, swooshy vibrato with more top-end sheen.

A vibe-style pedal is often best used when positioned before any distortion pedals and into an amp dialled up to properly shift some air and get some tooth-rattling bass moving. Dutifully we add the Moonlight after the Vibe and warm our trusty combo up to full clip. And it is good. Very good in fact.

It’s always interesting to hear how two pedals from the same maker work together. In this case the combination of the Moonlight and the Vibe makes for a powerful voice that comes shuddering out of the 1×12 cabinet. It’s an exhilarating take on that iconic, chewy sound so beloved of classic rock and psychedelic blues aficionados. The two pedals bring out the best in one another, the fuzz contributing warmth, bite and aggression, the Vibe bringing depth and movement, with neither pedal being overpowered nor becoming thin or indistinct.

While Greuter Audio may be a new name to many players, on the strength of this pair of quality handwired boxes, the brand should be on the radar of anyone browsing the boutique end of the market for extremely convincing classic tones coupled with well thought-out modern tweaks.