Mooer continues its foray into the world of digital-modelling floorboard units and unleashes a new flagship model. Will cats who like Helix be tempted to stray? 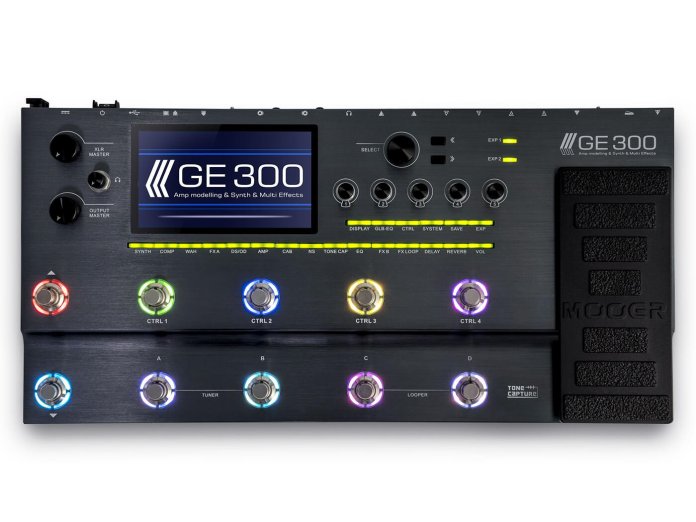 Mooer continues to fix its sights firmly on becoming a major player in the world of digital modelling. We’ve become used to seeing Mooer undercut the likes of Line 6 and Boss in the past, but with the release of the GE300, it seems the Chinese company now wants a share of higher end of the market, too. It’s a bold move – can the GE300 make inroads?

The relatively compact 410 x 201mm unit and small control panel belie the sheer number of features onboard, including a huge array of effects, amps, speaker cabinet models, a third-party impulse-response loader, a synth module, a looper and even the ability to use Mooer’s Tone Capture tech to take a Kemper-esque snapshot of your own equipment.

The hub of the unit is the display, which illustrates the signal chain of each preset. That chain consists of your input and output and the virtual equipment in between, such as your amp, cabinet and pedals. Each component is represented by its own icon and has a corresponding soft button that is used either to switch it on or off within the signal path, or to select for editing. 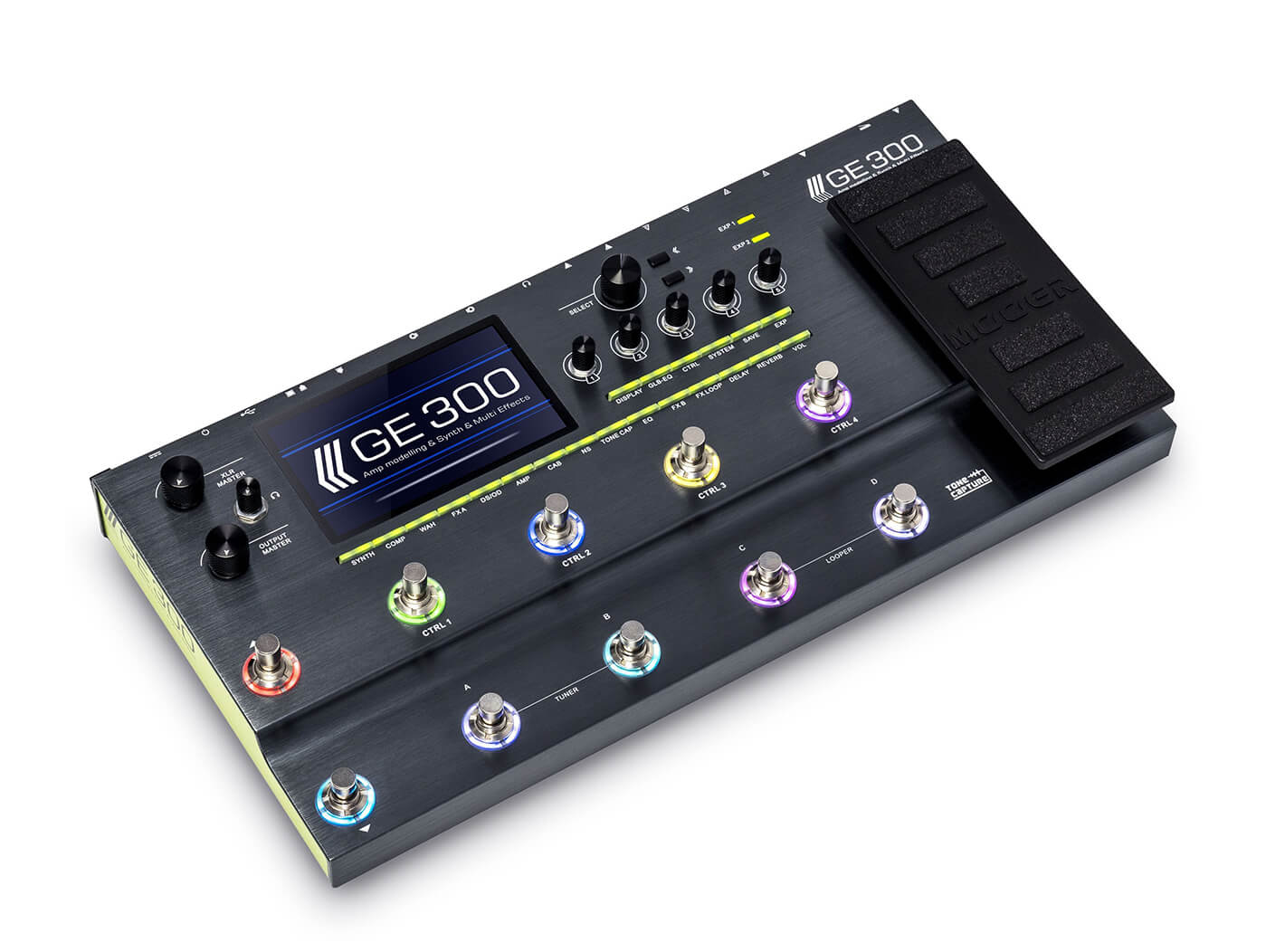 The diminutive screen means you’ll have to be in very close proximity to the unit in order to edit presets, however, a PC/Mac software interface allows editing to be done from your computer which, for studio work at least, will be the desired method of altering parameters.

There are two ways to configure the footswitches – the first enables us to use the bottom row to switch between presets, allowing the top row to be used to toggle individual effects on or off within each preset. The second mode allows you to use the unit as a traditional pedalboard, where each preset is fixed and all eight footswitches can be assigned to various components of the signal chain – a delay or distortion, for example.

A variety of output methods are available: the four-cable method allows us to forgo digital amp and cab modelling and utilise the effects-only portion of the unit in conjunction with our guitar amplifier. Most of us, however, will tend to either favour running straight into the PA via the XLR out, or into a power amp and corresponding FRFR cab. There is also the option to run both these signals simultaneously if you wish to use one for monitoring purposes.

Onboard the GE300, Mooer’s aforementioned Tone Capture functionality has three distinct modes. In ‘amp and stomp’ mode, we are able to model an amp or drive pedal. ‘Guitar mode’ boasts – and it’s a big boast – the ability to capture the unique tonal and EQ characteristics of your guitar as long as it has some form of pickup, while ‘cab mode’ allows you to replace pre-installed cabinet models with IRs of your own.

We put the Mooer Tone Capture engine’s amp-modelling abilities to the test when reviewing the Preamp Live and the results were pretty impressive, so the prospect of testing out ‘guitar mode’ is exciting. We immediately take it to the extreme and attempt to transform our high-output PRS Custom 24 into a single-coil-loaded, maple-neck Telecaster.

Sampling the ‘target’ tone (the guitar you wish to sound like) and then the source tone (the guitar you’ll be using) is a surprisingly short process that takes just over a minute. The results are not as immediately impressive as the amp-modelling mode – certain nuances of the guitar are captured, but even though three frequency-band controls are provided for fine-tuning, we are never able to achieve a perfect facsimile of our Telecaster’s tone through our PRS. However, it must be said that the result is a decent-enough approximation. 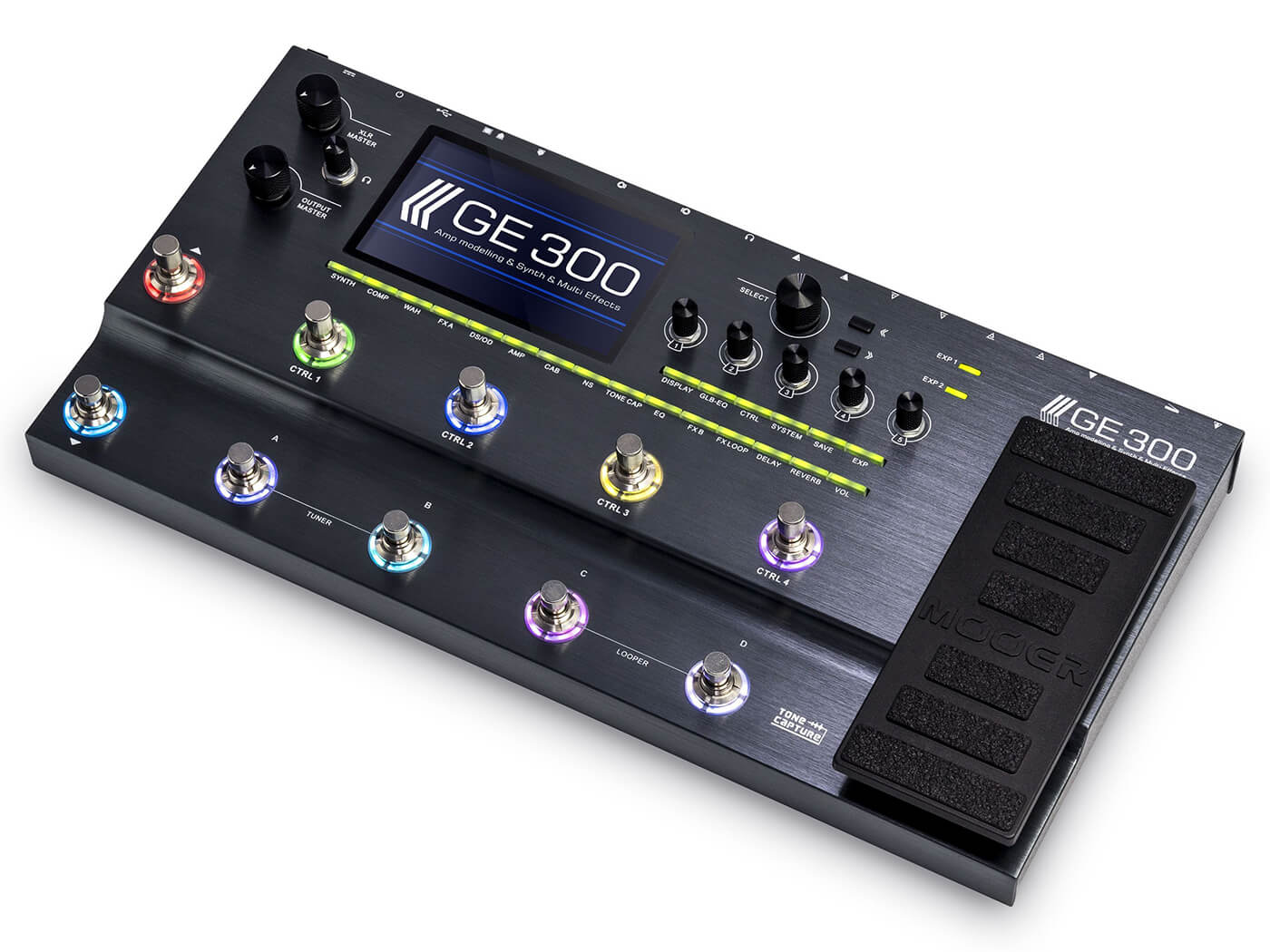 With 108 amp models and 164 effects, the palette of sounds available (the majority of them based on Mooer’s successful Micro Preamp series) run the full tonal gamut, catering for every stylistic requirement. We’re drawn to our favourite classic Marshall and Fender-type tones and they indeed prove to be worthy recreations.

Moving along the presets, we find ourselves transfixed by ‘USGOLD 100’ – a profile of the mighty Friedman BE100. There is a wonderful depth of tone to this model and its dynamic responsiveness adds to the illusion we’re playing through a real amp. It’s fair to say that we’re now at the stage in the evolution of digital modelling technology during which subjective appraisal is more concerned with nuanced attributes such as depth of tone or dynamic response than ‘good’ or ‘bad’, with the higher-priced stalwarts Fractal and Kemper still providing the benchmark.

Whereas the Preamp Live has little competition in its price range, the GE300 faces stiffer opposition, most notably from Line 6’s Helix LT. The Californian company has a long-established reputation, whereas Mooer is an emerging force. It’s difficult to predict a winner, but the sheer number of effects and options onboard make the Mooer GE300 a definite contender for your money.