Strymon is a market leader in analogue-inspired digital effects, so any new launch is big news. Time to dive into a retro echo chamber with the Volante Magnetic Echo Machine. 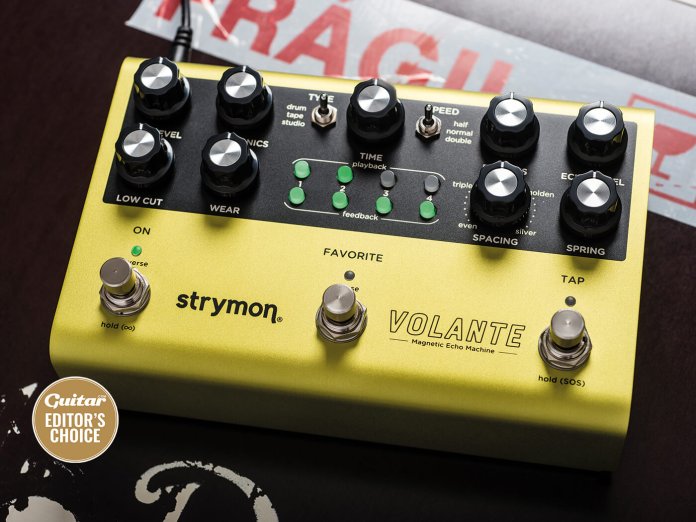 The new-for-2019 Volante is similarly large, but it offers drum-style echo, along with tape echo and studio-style reel-to-reel tape delay. All the effects parameters are adjustable from the top panel and footswitches provide tap tempo, sound-on-sound, reverse, pause, splice, and infinite-repeat functions.

There are four virtual-playback heads that can be activated/deactivated individually. They can also operate at full or half volume – indicated by green and amber LEDs respectively. The output signal from each head can be sent back to the record head, with four switches activating/deactivating the feedback. Each head output can also be panned individually when using the Volante in stereo.

Parameters such as echo level, repeats, record level and time will be familiar to anybody who has used a delay pedal. Spring is simply a level control for the post-delay reverb effect and low cut rolls off the bass content of the repeats to prevent things from becoming muddy.

Wear simulates drum or tape degradation, along with playback-head condition. Mechanics sets the amount of simulated speed fluctuations, which are typical of mechanical echo devices.

The upper edge accommodates left/right inputs and outputs and an instrument/line-level input-level switch allows the Volante to be used as a guitar or studio effect. There are also MIDI In and Out sockets, a USB connector for controlling MIDI via a computer, and an expression-pedal input for connecting an external tap pedal, a quarter-inch jack to MIDI cable or Strymon’s own three-button MultiSwitch Plus (£139).

The dry signal follows an analogue signal path with a JFET front end. 24-bit 96kHz converters handle the digital side for the SHARC DSP, with 32-bit floating-point processing. Input impedance is an industry standard 1M-ohm and output is a low-impedance 100-ohm.

Users have the option of true bypass with silent electromechanical relay switching or an analogue buffered bypass. The chassis is aluminium with an anodised finish in Binson-style green and the Volante comes with a dedicated centre-negative nine-volt 300mA power supply. 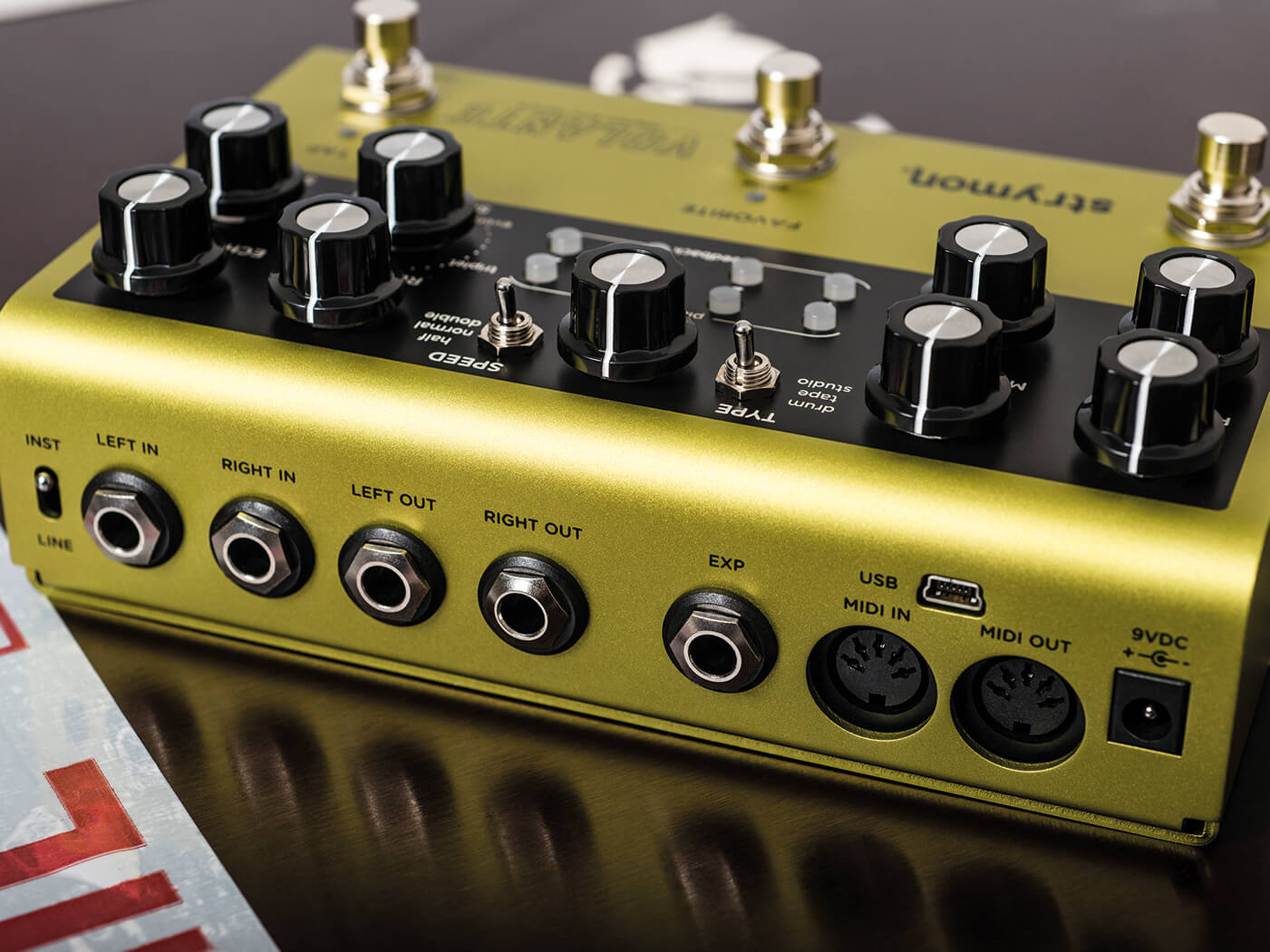 In order to assess the three operating modes, we select the third head only, activate feedback, set the repeats to about halfway and then minimise wear and mechanics. The differences are fairly subtle, but the studio mode is noticeably cleaner, with minimal degradation in the repeats and very little pitch wobble.

The drum mode sits at the opposite extreme, with repeat distortion increasing as treble degrades and a swirling pitch-shift that feels not unlike a slow Leslie speaker. It’s an effect with real depth and ambience that puts us straight into a Gilmour frame of mind. Tape mode is somewhere in the middle, sounding a tad less roomy and modulated than drum mode, but less clean than the studio setting.

The effect of the wear and mechanics controls quickly becomes apparent. Turn the wear control up and the speed at which the treble content of the repeats degrades increases. Mechanics sets the amount of pitch modulation and both controls have a satisfyingly wide and usable operating range. It certainly helps that the pitch modulation is asymmetrical, and sounds all the more natural for it.

One of the Volante’s most appealing characteristics is the way it overdrives. Turning up the record level eases the echo into a smooth and warm style of clipping and you can restore the wet/dry balance by reducing the echo level. Layering distorted echoes under a clean tone creates an intriguing ambience, and things get even better when reverb is added to the mix.

With four virtual heads and individually adjustable feedback sends, the Volante manages to conjure a seemingly inexhaustible variety of retro-flavoured echo effects. One minute we’re channelling Hank Marvin in his pomp, then it’s late-era Slowdive before we drift into ambient soundscapes. The only real difficulty is that it’s all too easy to get sidetracked, because the Volante keeps taking you off in unexpected and inspiring directions. No doubt it will all become more predictable after a while, but the learning process will be a load of fun. 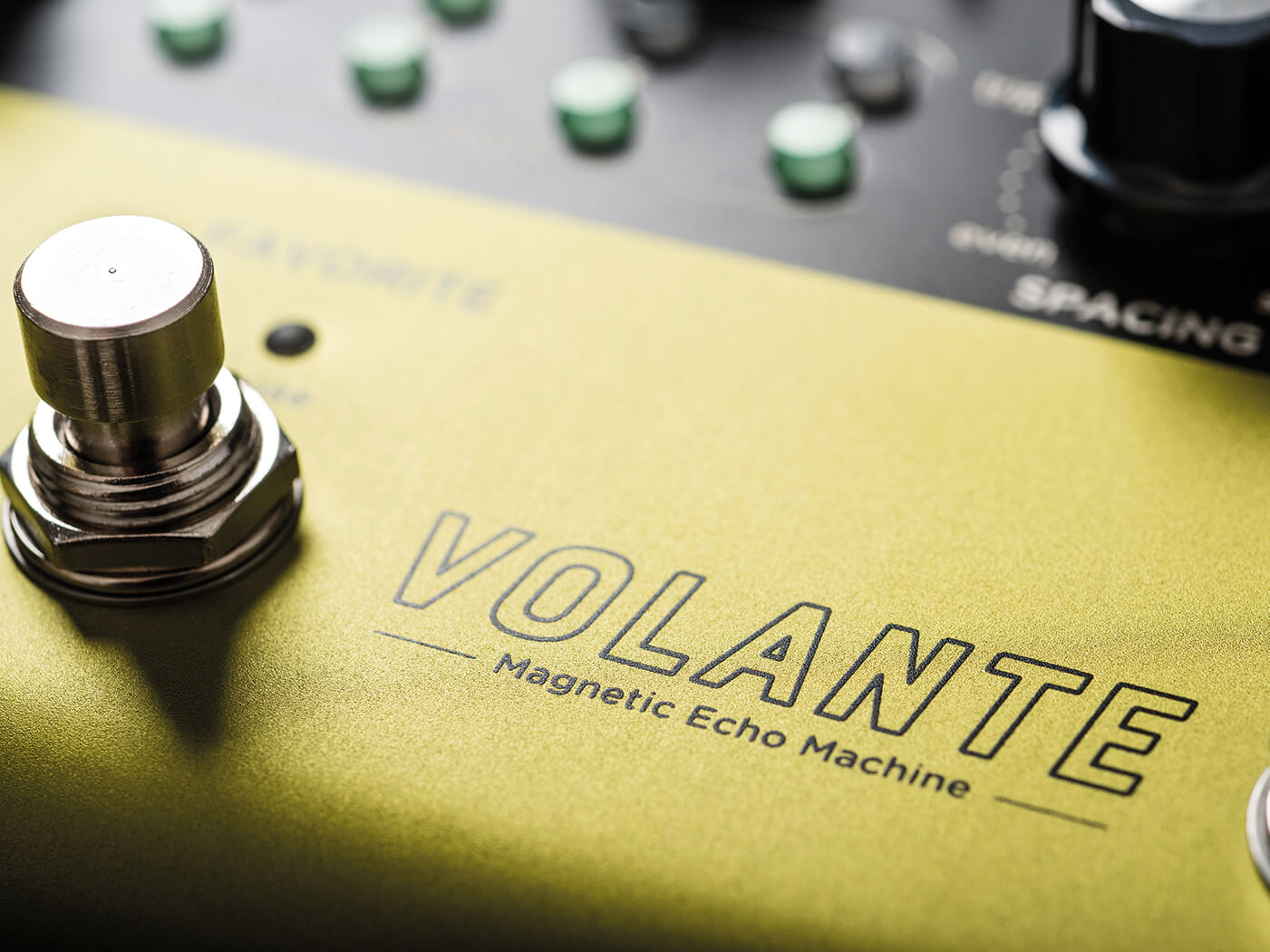 Although the Volante makes a decent job of slapback echo, we can’t quite get the dirty thickness of tone you hear from real Echoplexes or Copicats. We compare the Volante with a Catalinbread Belle Epoch and quickly conclude that if slapback was priority one, the Volante wouldn’t shift it off our pedalboard – the Volante is a unit pitched primarily at those who like their delay trails considerably longer than the Brylcreem brigade.

Reverb obsessives may also prefer a more specialised stompbox, but the Volante’s reverb complements guitar tones and has a spring-like quality without being splatty or diffuse. Given how dirty and grungy the delays can get – if you want them to – it makes sense that Strymon has opted for a cleaner style of reverb.

Plugging into two amps simultaneously to test the stereo capabilities, we are immediately met with ground-loop hum. If you want to enjoy the full stereo potential of the reverb and ping-pong echoes, you’ll have to devise a method of electronically isolating the two amps. Lifting the ground connection of one amp is potentially unsafe and therefore not a solution.

Without extra switching devices, there are only eight presets available and there’s no screen to indicate which is selected or what the delay time is, so you’ll have to be accurate when tapping that tempo. Compared to the TimeLine, there’s a restricted range of delay effects, but how often are you likely to use the more outlandish options? It wouldn’t make sense for Strymon to risk cannibalising sales of a popular product in its range, so naturally the Volante brings something different to the table.

The Volante is something of a one-stop solution for vintage-style echo effects. It can do everything from The Shadows to psychedelia, shoegaze, 70s prog and beyond with equal aplomb. Yes, it’s going to take up a lot of space on your board, but when you consider it’s like four pedals in one – with reverb thrown in – both the footprint and price are more than reasonable. Happy exploring.