Looking to capture the iconic roar of a vintage Marshall without waking up your neighbours? These UAD plug-ins may be the answer.

Universal Audio might be best known for its studio gear, but the game-changing OX unit and stellar Fender ’55 Tweed Deluxe plug-ins are proof that the brand has plenty to offer modern guitarists.

This Marshall Legends bundle comprises a trio of amp-modelling plug-ins developed by Softube, that work exclusively with Universal Audio’s digital interfaces. They’re compatible with UA’s Unison technology, which means you can play through them and also record the sounds as you hear them, with no latency. Alternatively, you can choose to record direct and run pure guitar signals back through the amp plug-ins to dial in the exact tones you want. You could think of it as virtual re-amping.

Bundling three classic Marshall amp models together makes a lot of sense because ‘Marshall tone’ means different things to different people. It’s understandable when you consider the company has been around since 1963, but regardless of the era, there are crossovers in sonic characteristics. 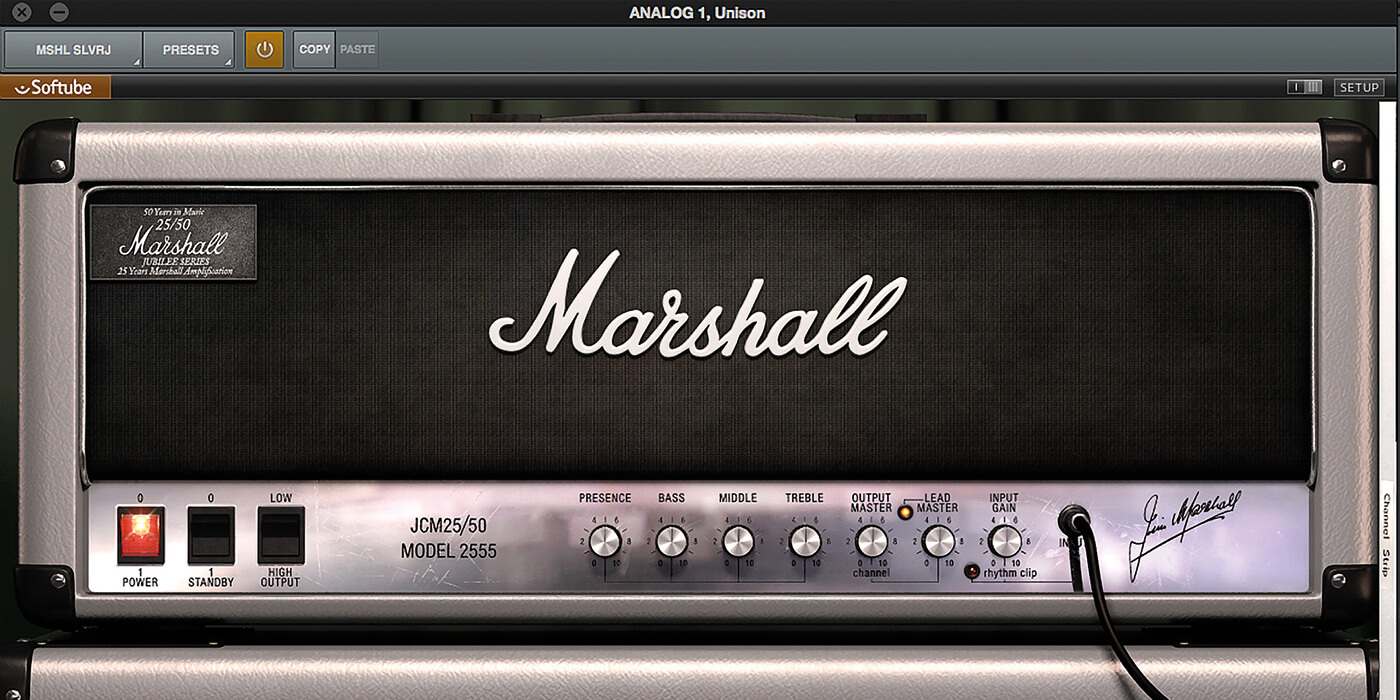 Even if you prefer 1970s Marshall tones, you’ll probably like their mid-60s and 80s amps, too. This collection spans the key decades with a virtual KT66-powered mid-60s Bluesbreaker, a 1959 Super Lead Plexi and a 2555 Silver Jubilee from 1987.

The virtual amps can be launched from individual channels on a DAW or from UAD’s Console application, which is packaged with the UAD Apollo hardware interfaces that you need to run the plug-ins.

Launching the plug-ins loads up windows with amusingly skeuomorphic control-panel graphics. The Super Lead even has some Tolex damage, a missing metal cap on the middle control and a control panel that looks like it needs a good clean. The technology is serious, but the vibe is pure fun.

To the right of the control panels, you’ll see the words ‘Channel Strip’. Click on that, and a small section of a mixing desk opens up with faders corresponding to two close mics and various room mics – the Bluesbreaker and Jubilee get two and the Super Lead only one. In effect, it’s a mock up of a typical guitar recording setup that might be used by a pro engineer in a commercial recording studio. 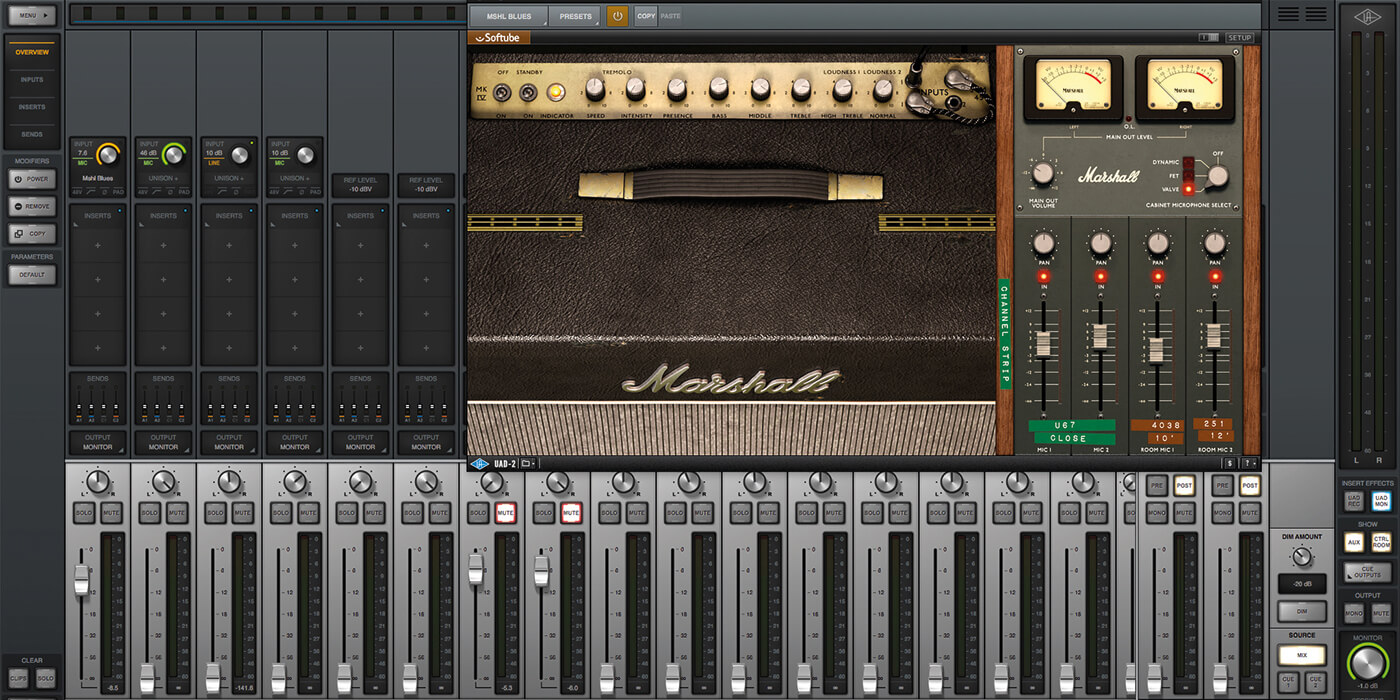 For each of the plug-ins, the room microphone models are pre-selected – a Coles 4038 ribbon and ELA M 251 for the Bluesbreaker, a C12 for the Super Lead and for the Silver Jubilee, a 4038 combined with an RNR, which can be routed through a delay effect with a feedback control and a range from 0ms to 300ms.

Each channel can be activated and panned individually and the choice of close proximity microphone models is extensive. All three plug-ins allow you to select dynamic mics, as well as FET and valve condensers and each one has a master-output level control that operates post faders. Plug-in-specific features include global low- and high-frequency adjustment on the Super Lead model and an input noise gate on the Jubilee.

For testing, we use an Apollo 8 Quad and once it’s powered up with its audio outputs routed through our monitors, it’s simply a case of plugging a guitar into one of the two Hi-Z instrument inputs on the front panel. With the Console app launched, the Apollo 8 automatically detects which input is being used and that channel defaults to Hi-Z.

From there, we adjust the channel’s input gain to achieve a healthy level without clipping and click on the Unison box to open the plug-in menu. The Marshall amps are located in the guitar and bass section and we start working our way through the plug-ins.

Despite their rockin’ reputation, Marshalls of every era are often overlooked for their versatility. Happily, this fact hasn’t escaped Universal Audio – the tonal range is so extraordinary that if you have a Marshall tone in mind, then one of these plug-ins is pretty much guaranteed to deliver it. 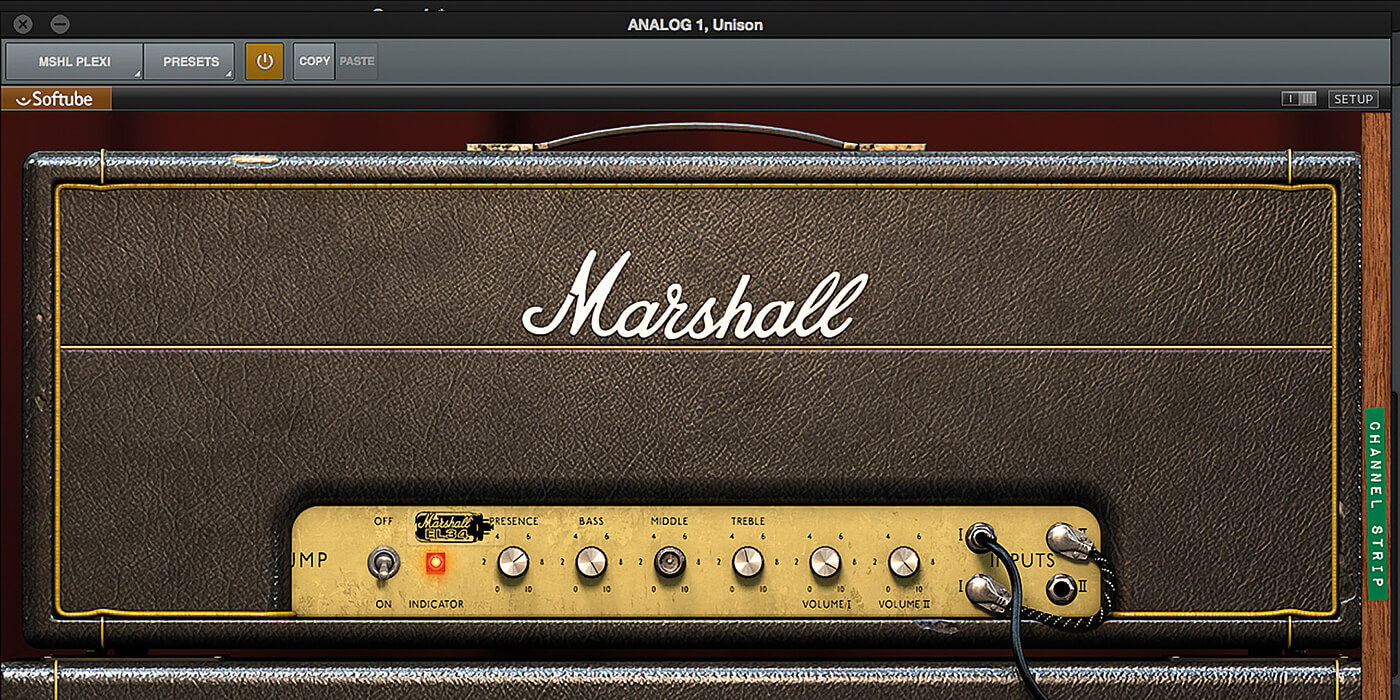 The whole experience is uncannily lifelike, with the plug-ins capturing that glassy dirty clean and throaty roaring overdrive as well as all points in between. Even the dynamics and the clean-up responses are eerily reminiscent of the real thing.

When you factor in the mic’ing options and desk-style EQ, the power of this DSP is astonishing. Start by loading up the excellent Tony Platt-created presets – if only to alert you to the possibilities. Then you can try adjusting the presets before creating and storing your own.

When your correspondent was working full-time as a studio engineer, the favoured practice when recording high-power Marshalls was to keep the head in the control room and run speaker wires through to the live room via tie lines. Once the mics are positioned, all the tone and volume changes can be made in a relatively low-noise control-room environment.

Besides being a lot easier on the ears, tones and playing performances can be assessed in the context of the track while listening through studio monitors. It’s a very efficient, comfortable and effective way of working and using the Marshall Legends Bundle provides all of the same advantages – albeit in a virtual form.

The tones on offer are convincing and inspiring, but you could argue that there are some downsides – playing a powerchord through a small monitor is a very different experience to the visceral thrill of standing in front of a flat-out Marshall and that interaction between guitar and amp, as bloom drifts into feedback, is also absent unless you’re prepared to risk blowing up your monitors. 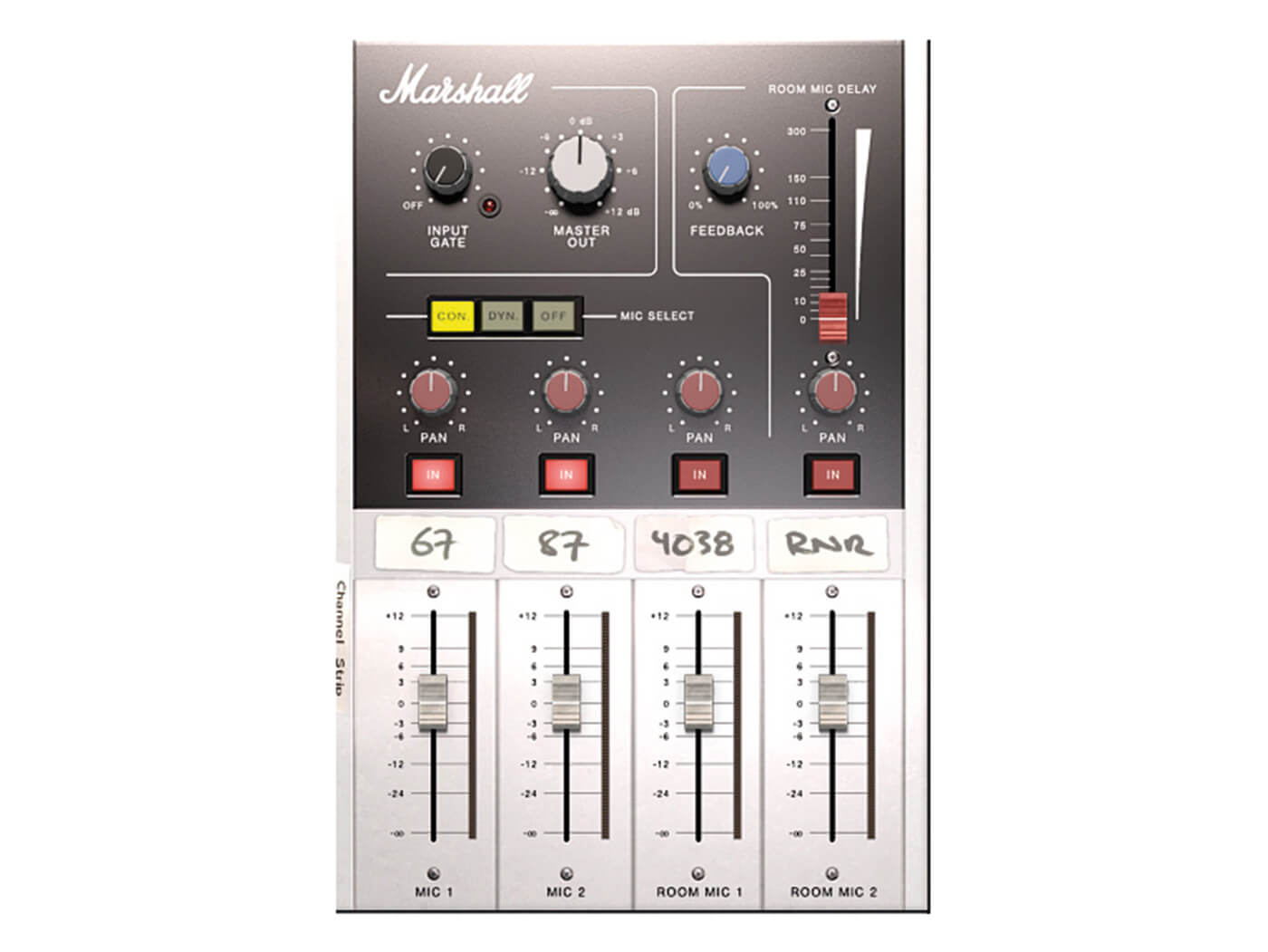 For the most part, however, the advantages greatly outweigh the disadvantages. And it’s important to make clear that these UAD plug-ins are intended to emulate the tones of Marshall amps as they would sound when mic’d up in a pro recording studio – not the experience of playing while standing in front of the real thing. In that regard, these models are a complete success. They sound astonishing, but what’s equally impressive is how intuitive, pleasurable and simple they are to use – there’s nothing that kills inspiration quite like battling with a counterintuitive GUI.

Based on the full MSRP, buying the Marshall Legends Bundle rather than the individual plug-ins will save you £148 – which is effectively three plug-ins for the price of two. However, keep your eyes open for UAD offers because at the time of writing, buying individually is actually cheaper.