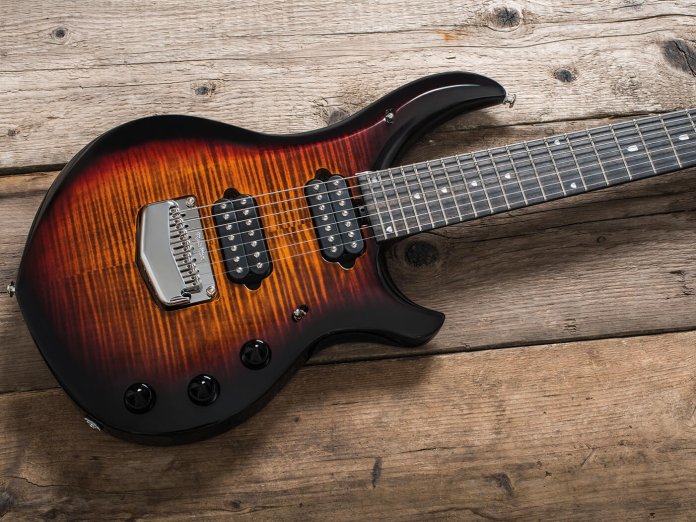 Introduced in 2014 – in addition to the long-running and much vaunted JP series – the Majesty entered its fifth year of production with a tweaked range for 2019, including new DiMarzio signature pickups and finishes. Conceived out of Dream Theater mainman John Petrucci’s desire to include a neck-through guitar in his arsenal, rather than tweak the tried, tested and successful formula of the long-standing JP signature, a completely new design emerged – one that was ergonomic, balanced, and sonically versatile.

Though not yet quite as ubiquitous on the prog-metal scene as the JP series, the Majesty seems to be in John’s hands more than ever, and apparently what we’ll refer to as the ‘Tiger Eye’ model reviewed here was used extensively on the new Dream Theater album, Distance Over Time.

The Tiger Eye is the flagship of the 2019 Majesty range. Limited to a run of just 300 and available in both six- and seven-string versions, it is the only Majesty in the range to feature a maple top, flamed maple neck and an alder body. The other Majestys have either a mahogany or basswood body and are priced at around two thirds of the cost of the review model.

Over the years, the Majesty’s ongoing development has yielded much improvement to its appearance. When first introduced, its finish was designed to exude a race-car vibe – appropriate for the high-octane speed-picking pioneer it was designed for – with two-tone colouring and a maple ‘shield’ intended to mimic a sheet of carbon fibre. However, with its stark ergonomics, extended and protruding upper horn, the finishes accentuated unusual aspects of the design and perhaps diminished its potential to appeal to a more conservative audience. The 2019 models have dropped the two-tone colours and introduced some new finishes which, although striking, are more conventional.

The figured maple on the body and headstock here imports a genuine elegance. Flip the guitar over and the theme continues with a three-piece neck with mahogany sides and a strip of matching flamed maple through the middle. Again, it’s elegant and eye-catching and the gloss black sides give the impression of a sunburst finish, mirroring the body. The through-neck is seamless and the recessed neck heel has been designed to offer unencumbered access to all 24 frets.

There are a lot of cavities required to house the complex configuration of electronics, which include a piezo bridge and onboard preamp. There are three aluminium control plates at the rear which, perhaps surprisingly given the guitar’s weighty price tag, aren’t recessed. Yet despite all the electronic gadgetry on board, the guitar remains both light in weight and perfectly balanced.

After spending some time putting it through its paces, the flat radius and slim neck prove to be very supportive of all hand positions, not just the thumb-behind-the-neck that technical players are so often associated with. Regardless of depth measurements, the wonderfully rolled fretboard and supporting shoulders of the neck ensure that the underside of your first finger and thumb are guaranteed a comfortable surface. Once again, we’ve yet to play a Music Man that doesn’t have a fabulous neck.

The ebony ’board is perfectly smooth and naturally finished and while a 17-inch fretboard radius implies a flatter-than-average surface, there’s a noticeable curvature – which takes very little getting used to, even if you’re more accustomed to a rounder radius. The neck is not as wide as you might fear if you’re approaching this from a six-string-only background and wrapping your thumb around the neck for bends, or even chord shapes that utilise the thumb, is a cinch.

While the concept of ergonomics can mean different things to different guitarists – and traditionalists would argue there are few guitars physically comfortable that a Strat – a great deal of thought has been given both to the contouring of the body and the layout of the controls. The neck heel delivers on its promise, and although only when sitting or wearing the guitar up high are you able to shred away comfortably around the 21st to 24th fret area of the seventh and sixth (low B and E) string, this is hardly the business end of any guitar!

The myriad switches are easily accessible and don’t distract from actual playing. With a simple flick of the wrist, an active preamp with 20dB boost can be activated via the push-push volume control, providing a perfect volume hike for solos, and a coil-split facility is activated by pushing the tone control when the pickup selector is in the middle position.

Only when speed-picking away effortlessly (although not to Petrucci’s standard, of course) did we realise that there was a reason for our newfound agility. The forearm contour has been angled perfectly to deliver optimum support, thus providing freedom for the wrist to pendulate at speeds that your practice routine permits. It’s quite something to notice an immediate improvement to this technique without actually putting in any further practice – if only it was always this way!

Sourcing a seven-string guitar that doesn’t have either a fixed bridge or double-locking vibrato is a very difficult task. Vigier has designed its own and Hipshot is one of the very few companies that offers an after-market seven-string non-locking vibrato. But Music Man designed its own seven-string vibrato many years ago and it remains one of the most functional, expressive and reliable units on the market. From adding shimmers to chordal work all the way to flat-out dive-bomb abuse, tuning will not be compromised. It’s also recessed and unobtrusive, and the chrome plate makes for a comfortable surface for your right hand.

Unplugged, the Majesty proves to be a very resonant guitar – as you would expect from a through-neck instrument built from premium tonewoods, especially in this price bracket. With two pickup selectors, piezo bridge, coil-split and volume-boost options, you’d be forgiven for thinking that the sonic variations on offer are mind boggling, but after consulting the manual briefly, activating each variant is sensible and entirely logical.

The three-way selector on the upper horn works solely with the piezo, with position one activating the piezo only, position two the piezo and neck pickup together (which can be blended using the volume control and the piezo volume control situated bottom right) and position three, which turns it off completely. Further piezo tweaks can be made on the back of the guitar.

Piezo pickups have fans and detractors. Sure, this is not a perfect emulation of an acoustic guitar – in this instance being rather bright and slightly synthetic sounding – but it’s a close enough approximation for a live-band mix and therefore one less guitar you’ll need to take to a gig. But regardless of whether you want to use it as a faux acoustic, it does offer up another interesting palette of sounds with which to decorate a song, especially when you begin blending in the magnetic neck pickup.

The 2019 Majesty sees the introduction of John’s new Rainmaker and Dreamcatcher humbuckers. They’re both very powerful, as you would expect, but feel less so than the DiMarzio Illuminators used in the JP series. Unsurprisingly, they pair very well with Boogies and other high-gain 6L6 amps – Petrucci’s preference – and through a 5150 profile on an Axe-Fx III, the bridge pickup is hot but not oversaturating.

Palm-muted lower-register riffs have clarity and punch with a slightly scooped midrange and the alder wings afford some top-end bite that enable down-tuned riffs to really cut through. In fact, alder is a somewhat underrated material for extended-range guitars, and the Majesty ably demonstrates this. A/B’d with our Vigier Excalibur seven-string, which itself has an alder body but with DiMarzio Blade pickups, there’s remarkably little difference through beefy 5150 and Mesa-style patches on our Axe-Fx – but the Tiger Eye delivers a little more clarity in the bottom and top end.

The neck pickup is warm and voiced perfectly for those moody, bluesy rock shredding passages for which Petrucci is known, and the pick-attack noise on both pickups is remarkably quiet considering how they have been voiced. The boost is very clean and we can’t detect it colouring the tone in any way. The coil split was slightly underwhelming by comparison, but entirely functional. Better clean sounds are to be found using the full humbucking settings and a rich, full-bodied tone is easily achieved with any 6L6-powered amplifier or model. Add a touch of chorus and a few open strings and you’re immediately in John Petrucci clean territory.

Although the onboard electronics don’t necessarily deliver tones that span a wide range of genres, there’s no denying that this is one of the finest metal and hard-rock guitars we’ve played and, in this seven-string incarnation, it’s a progressive-metal dream machine. Whether the guitar’s construction and exclusivity justify the sizeable upcharge of a couple of grand on top of the already lofty price is debatable, but if you like your guitars as uncompromising as John Petrucci likes his music, this could be the one seven-string to rule them all.