Gibson’s new management demonstrated its willingness to listen and respond to customers last year when the core lineup was updated and split into Original and Modern collections. Epiphone was next in line for a refresh and Winter NAMM 2020 saw the public debut of a range of new Inspired By Gibson models.

The strategy is pretty clear; Epiphone guitars in the Original Collection will be closer to their forebears than ever before, with vintage-style features and finishes, upgraded electronics with hand-wired CTS potentiometers and in addition, Les Pauls and SGs will benefit from a headstock design Gibson is calling the ‘Kalamazoo’.

For several decades, most Epiphone solidbodies have featured a headstock with the top corners of the ‘open-book’ outline missing, and many players have requested a design closer to the classic Gibson look. Such has been the demand, a whole subculture dedicated to Epiphone headstock conversions can be found online.

That said, the switch for 2020 isn’t such a radical move; Epiphones had open-book headstocks long before Gibson acquired the company and in recent years, they’ve continued to be a feature of original Epiphone designs such as the Wildkat. So although the Kalamazoo headstock more closely resembles the classic Gibson outline, it’s actually a historic Epiphone design. Either way, most people – us included – seem to think it’s a massive improvement.

Other common features on our Original Collection review guitars include Graph Tech nuts, nickel-plated hardware, vintage-style Epiphone Deluxe tuners with an 18:1 ratio and Indian laurel fretboards with a 12-inch radius. Time to take a deeper dive…

You might not expect a modern budget version of a 1950s student model to have much of a ‘wow’ factor, but this £349 guitar has it in spades. The colour looks wonderful and with its grain-obscuring opaqueness and hint of olive green, the vibe is very much mid- rather than late-50s.

“There’s nothing more you could want from a TV Special”

Vintage plastics obsessives will be pleased to note that the five-ply pickguard is equally impressive, with the upper layer of white thinner than the lower layer. We have an original Gibson guard on hand to compare and Epiphone’s attention to detail is admirable. The knobs and P-90 Pro pickup covers are similarly vintage in style and although we’re less enamoured with the truss-rod cover and textured rear cover plates, these are very minor details. 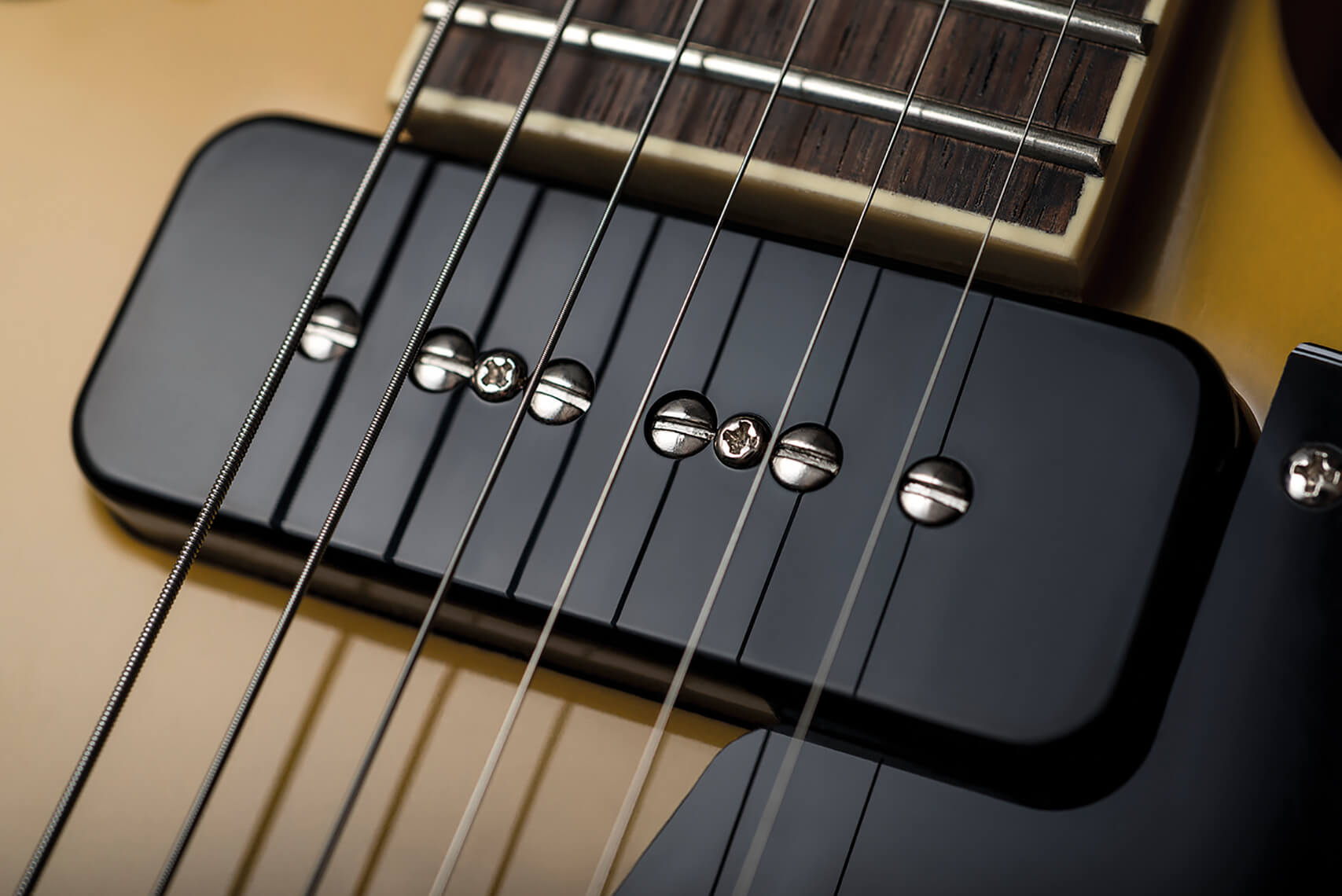 Where it really counts, the specs are spot on. The Special has a non-weight relieved mahogany body and a mahogany neck, and the neck profile is fat. As you might expect given the huge gulf in price, it lacks some of the subtlety and finesse of an authentic 1950s instrument, but it feels pretty great nonetheless.

The Lightning Bar wrapover bridge may not be a 1950s feature but many will welcome it. Gibson actually introduced this style of bridge in the early 1960s, but with one schoolboy error. For some reason Gibson’s new wrapover featured intonation compensation for wound G strings, which was arguably worse than having no compensation at all – by that time most of the world had moved onto a plain G. 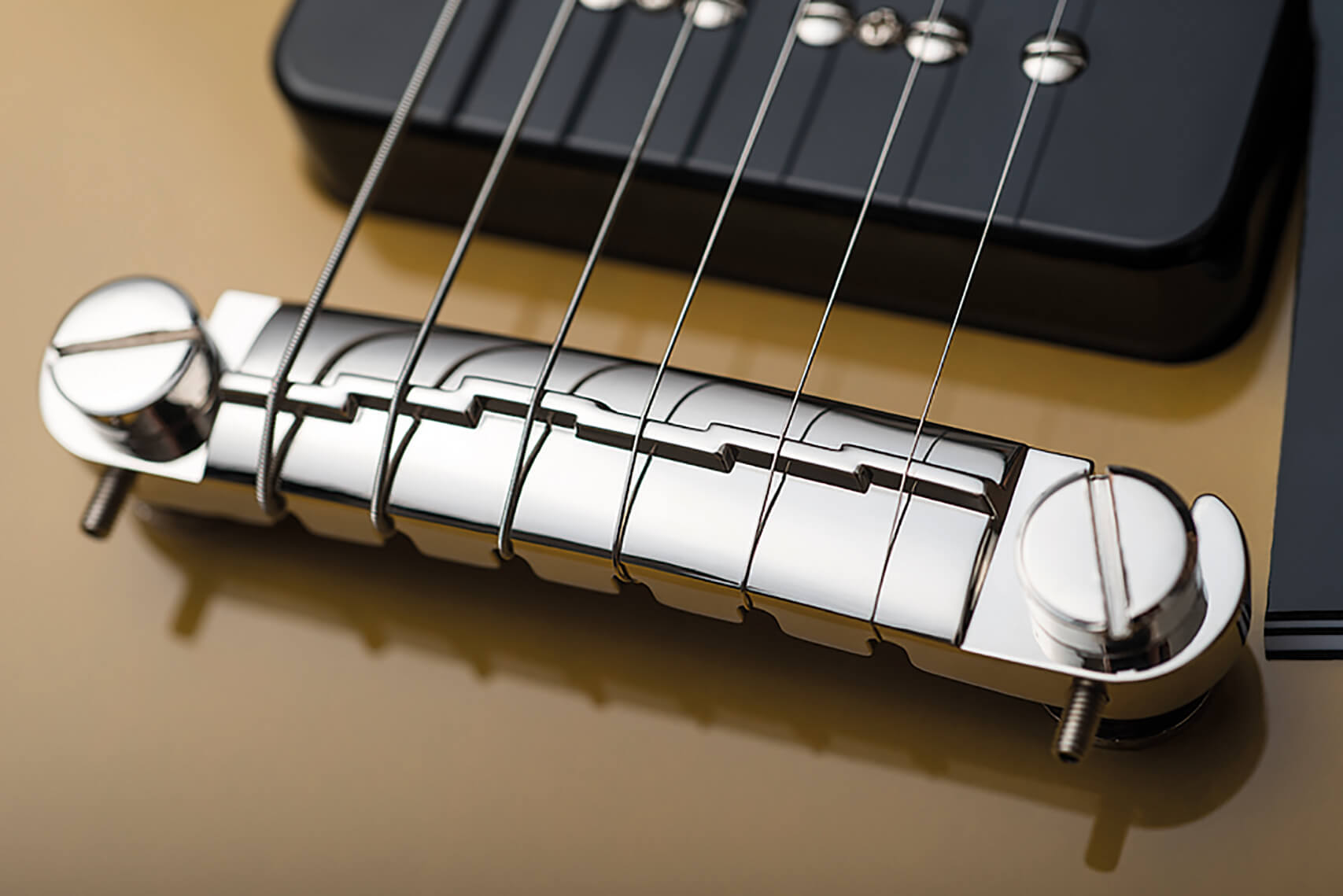 Here that error is rectified and the use of a compensated bridge has prompted this model’s designers to install the bushings equidistant from the bridge pickup. Consequently, unlike on vintage LP Specials, the bridge sits parallel to the pickup.

The intonation needs fine adjustment and the treble side has to be jacked backwards using the integral grub screw – the outcome is pretty accurate, but gives a slightly odd look because the bridge ends up angled with the treble side slightly further away from the bridge pickup than the bass side. That said, guitars are quirky devices and results may vary. 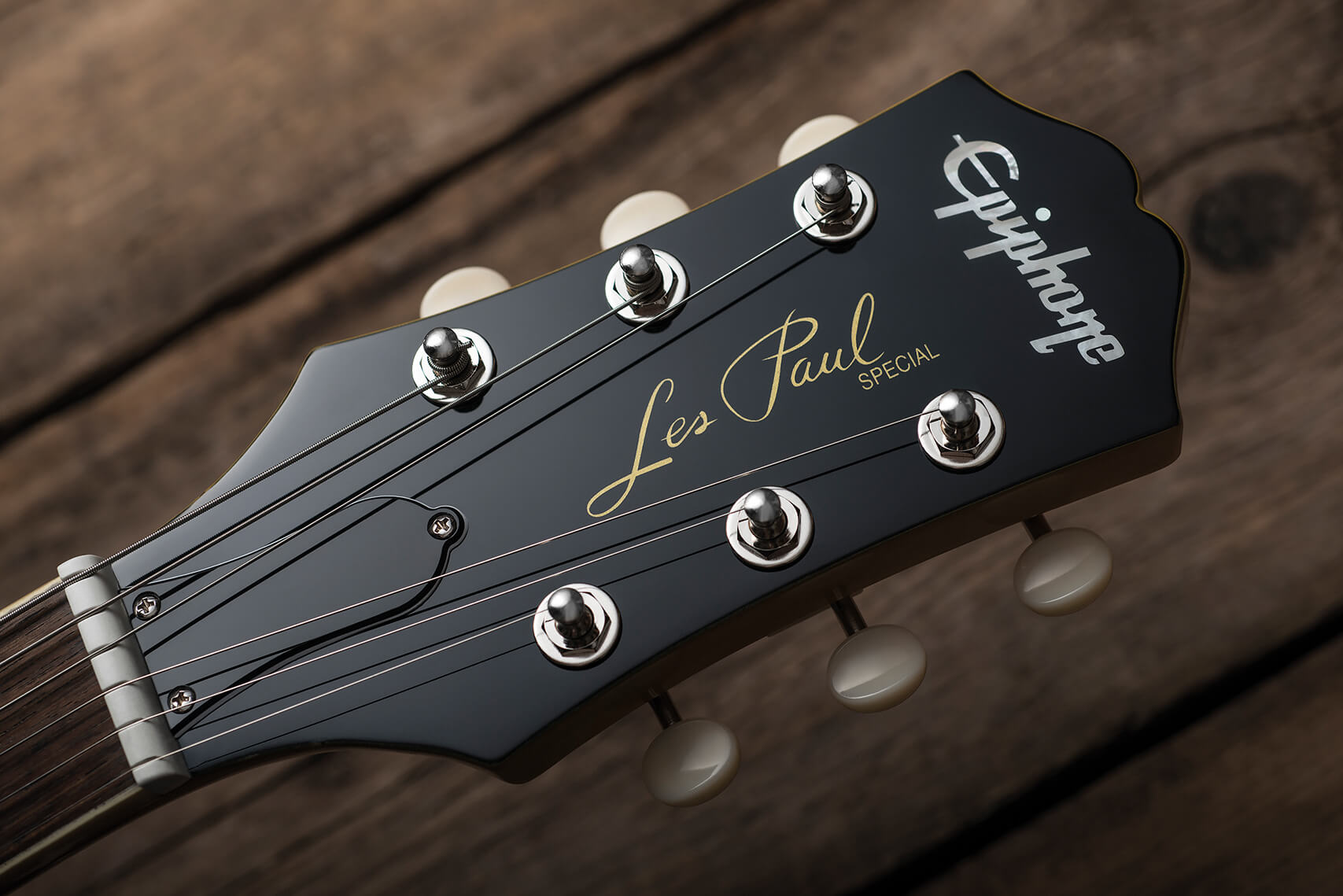 Alpine White makes for the most visually striking SGs and the very slightly off-white hue here really helps this Epiphone look the part. The Special’s pearloid marker dots look somewhat nondescript, but here we have something more convincingly pearl-like for the trapezoid inlays and headstock crown.

Single-ring tulip buttons are fitted to the Deluxe tuners and the colour looks very good. The fretboard gets off-white binding too, but no fret nibs. As with the Special’s wrapover, the tailpiece is locked tight on its bolt rather than held in place merely by string tension, and there’s no tilt whatsoever.

This time the designers have opted for a flatter ‘D’ profile that’s described as a 60s Slim Taper. While the Les Paul Special’s neck gets close to vintage spec, on the SG Epiphone has absolutely nailed it.

Yet again, this is a serious stab at providing players with vintage looks and playing feel at an affordable price. You get subtle maple figuring under an attractively toned Heritage Cherry Sunburst finish, 50s-style narrow binding in the cutaway and a very substantial neck.

If you’re familiar with vintage Gibson profiles, the feel is far closer to the necks that left the factory in late 1957 and ’58 than the more refined profiles of 1959. If you’re looking for something slimmer then that’s where the Les Paul Standard 60s comes in. 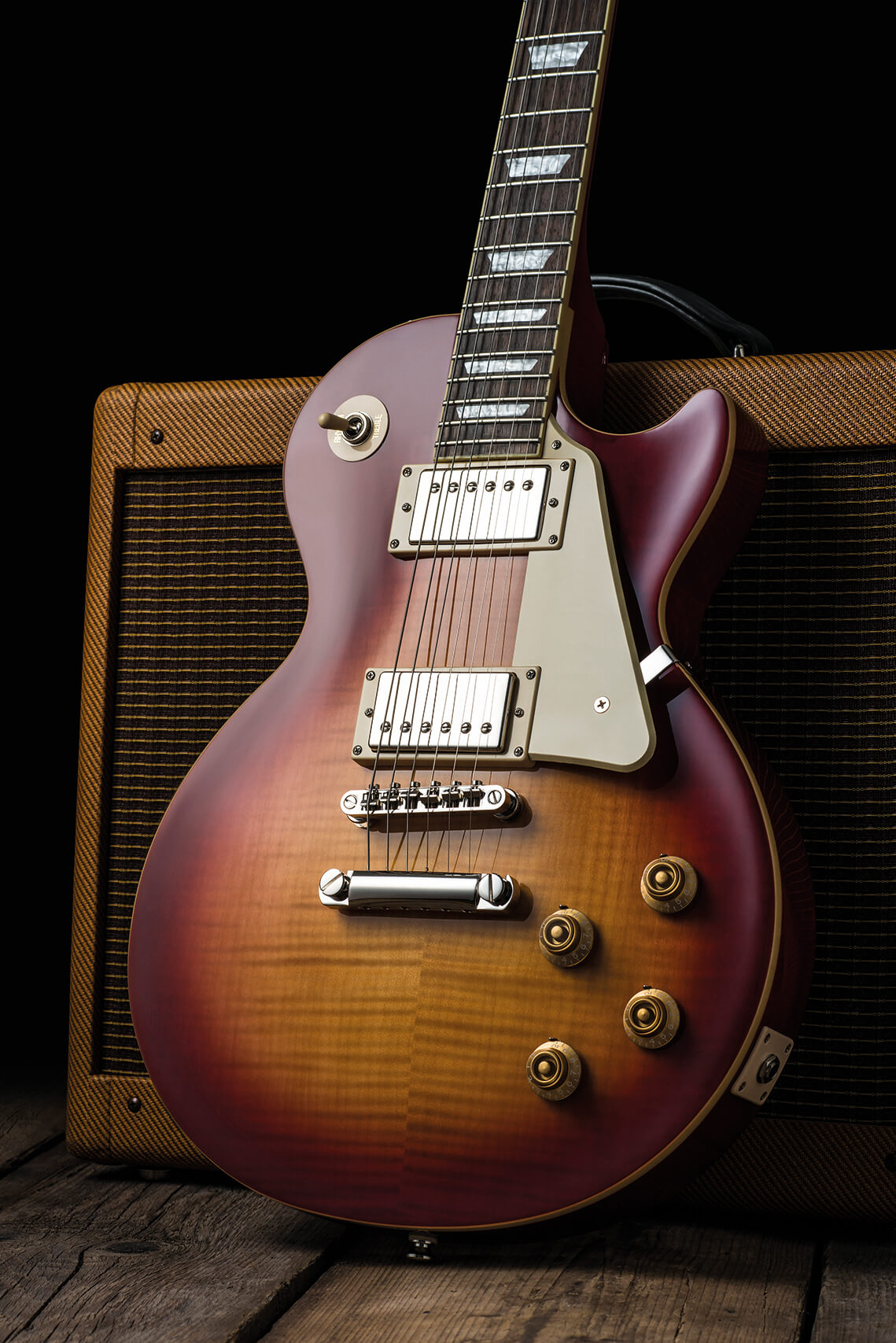 The body is made from multiple pieces of mahogany, but you can only see join lines on the sides, because they’re hidden beneath a body-sized sheet of mahogany veneer. Impressively, the mahogany neck is set into the body with a long tenon joint – a desirable vintage feature you won’t even find on some USA-made Gibsons.

The Standard comes equipped with Epiphone’s ProBucker humbuckers and they’re made with 18 per cent nickel silver bases and covers just like early PAFs. The bobbins are the same shape and size as Gibson units and the ProBuckers also feature sand-cast alnico II magnets with vacuum wax potted coils and four-conductor wire.

Time to plug in, and we turn first to the most affordable guitar of the three. Straight off the bat, the Special’s P-90 Pro soapbars have more late- than early-50s treble characteristics, but the extra cut is no bad thing. They also capture the effortless sustain, harmonic complexity and tonal balance we hear unplugged.

It’s one of those guitars you have to force yourself to put down because it sounds wonderful and has no discernible compromises. If you don’t like fat necks, you probably won’t like this one, but we find its playability hard to fault and overall, we’re blown away.

With its growl, chime, snarl, jazzy cleans and quacking country tones, there’s nothing more you could want from a TV Special. When you factor in the remarkably affordable price, it’s a strong early contender for 2020’s Gear Of The Year awards. 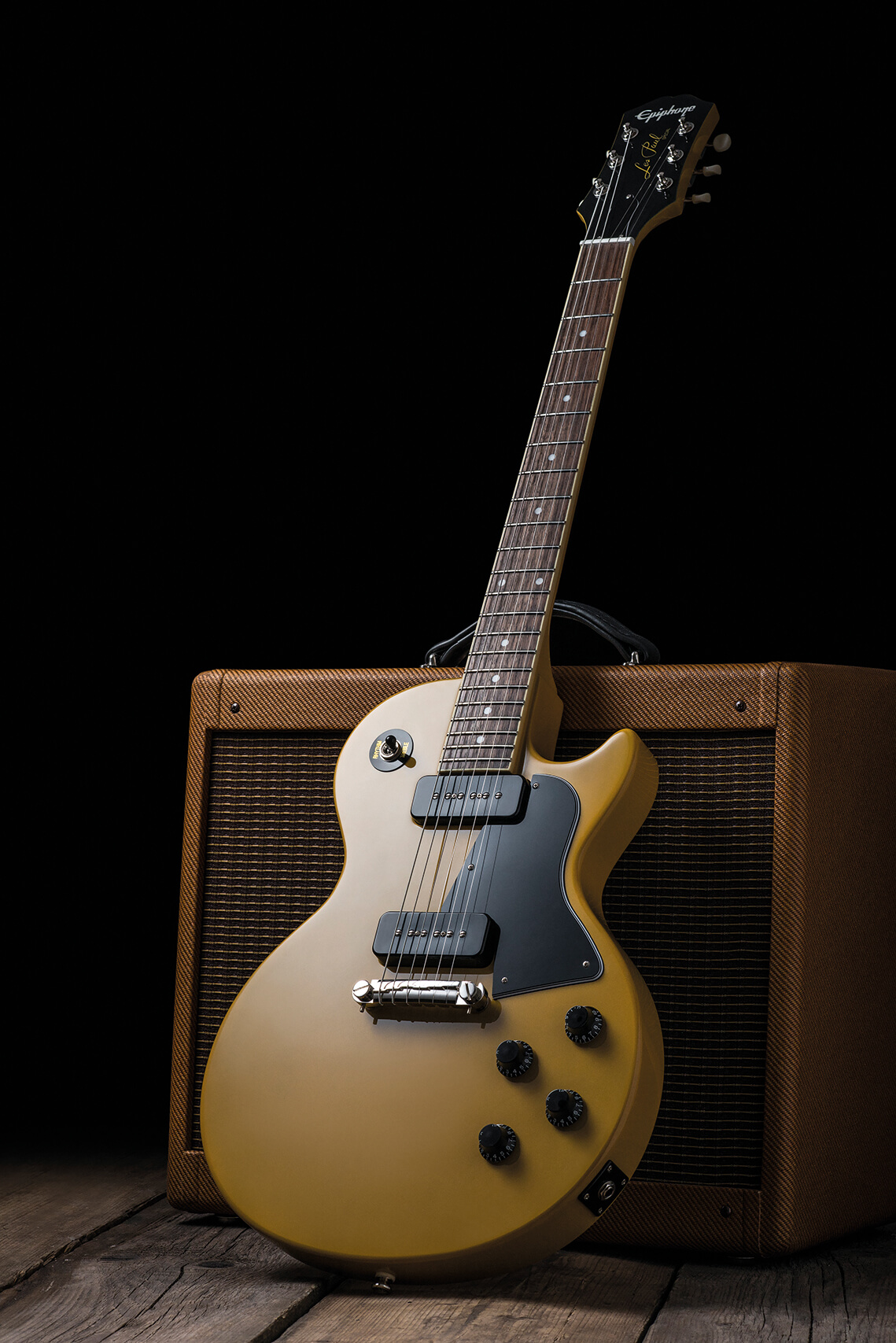 The SG is every bit as resonant as the Special, but the lighter weight and different bridge configuration make it livelier, brighter and quicker to respond. The Alnico Classic Pro humbuckers have real grunt and can easily overdrive an amp, but the brightness and clarity demonstrate that they’re not overwound and plenty of bite and note articulation is retained.

To really nail that mid-late 60s SG tone, we would like a touch more girth in the mids and maybe softer treble, but we’re able to get into the ballpark with some amp tweaking. Although this SG doesn’t quite have the velvety woodiness of the very finest examples of the breed, it’s still an absolute blast to play and a rather wild and thrilling ride. 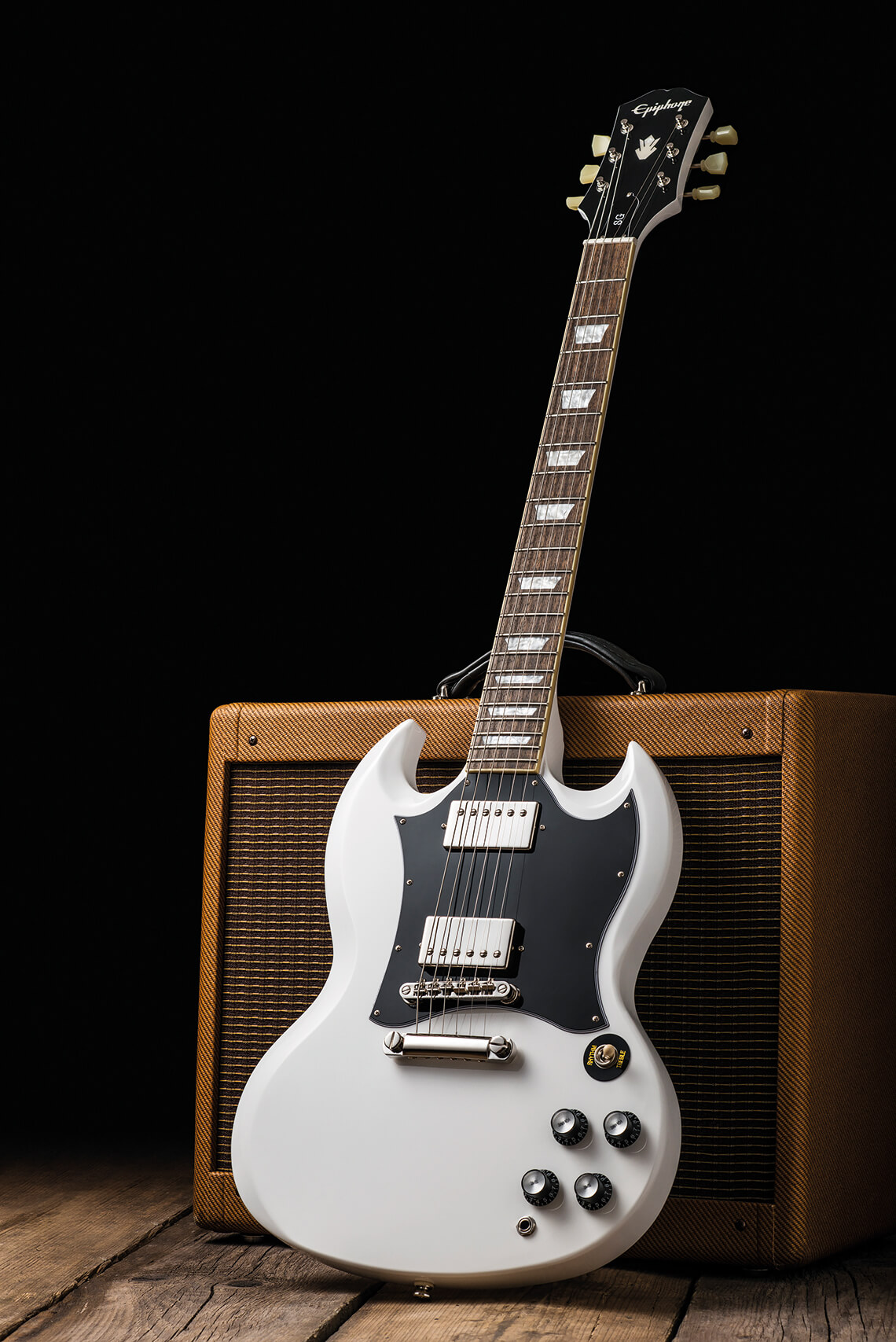 Given the sheer amount of these things that Gibson has sold over the years, any major update to the Epiphone Les Paul Standard must be a big deal for the company. And the good news is that the third guitar of our power-trio is as impressive as its siblings when plugged in.

We’ve often noted that vintage Les Pauls are incredibly versatile guitars, but some modern Lesters can be frustrating one trick ponies if their pickups aren’t up to it. The reality is that few modern PAF-style pickups are, and this is why the ProBuckers are so damn impressive. In fact, we actually pull them out of the body to check that a set of top-dollar units hasn’t been fitted by mistake.

The qualities we associate with vintage PAFs are very much in evidence here and the ProBuckers prove to be a little more vocal and articulate than the SG’s Alnico Classic Pros. The ProBuckers are sensitive, clear and in no way deficient in treble response – and just like genuine PAFs, when an overdriven amp is dialled in for the neck pickup, the bridge benefits from having its tone control rolled back slightly. 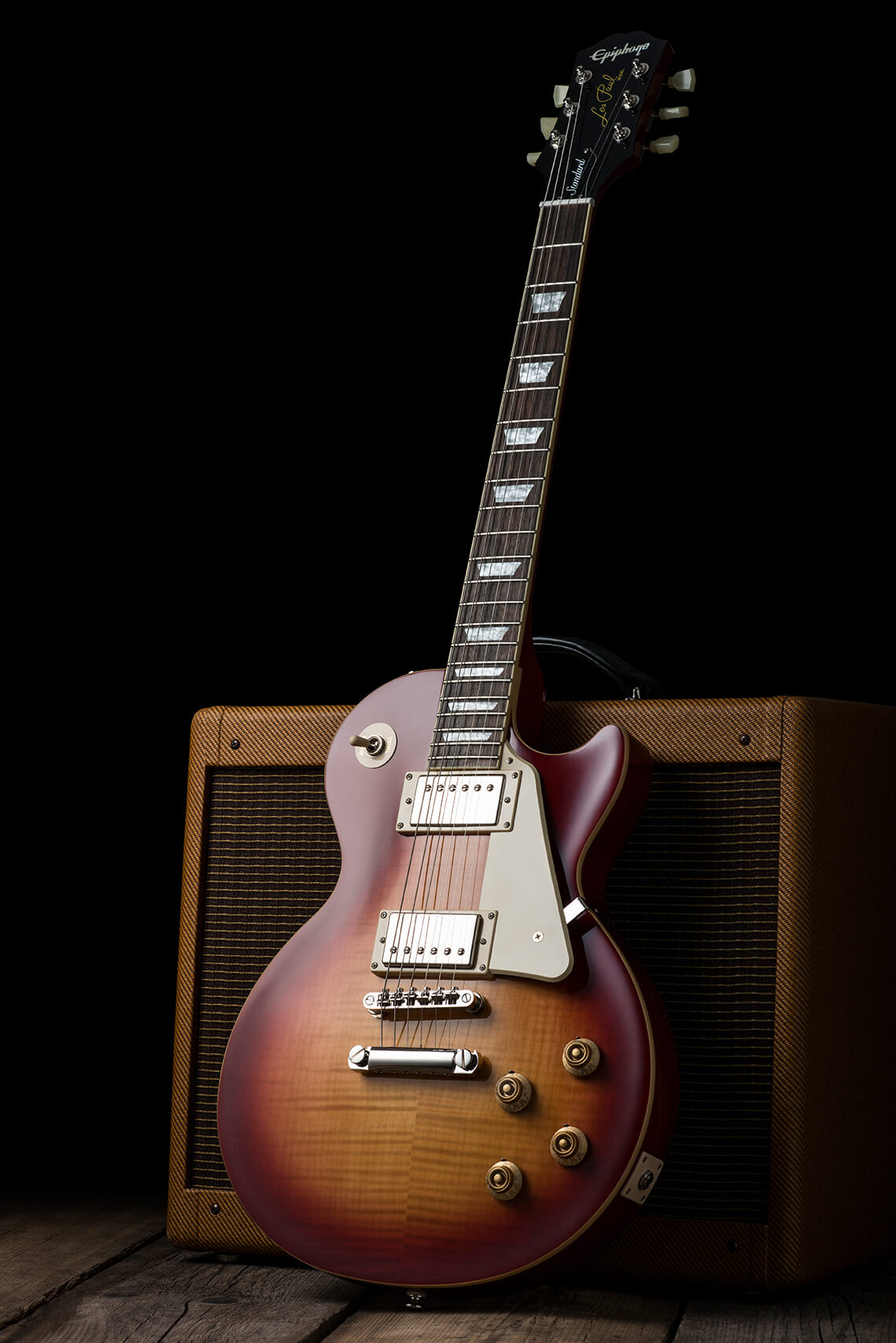 Sustain and fatness abound, but the tone controls work much like those of vintage LP Standards, with very little loss of clarity when you turn the volume down and no disappearing B and E strings when the tone controls are rolled back fully. By any measure this is an impressive 1950s-inspired Les Paul, and you will struggle to find anything better at this price.

Nobody can see the front of a headstock when they’re playing a guitar and strictly in terms of feel and vibe, the new generation of Epiphone instruments is uncannily Gibson-like. In fact, these guitars are so good they’re in danger of cannibalising sales from the more affordable end of the Gibson USA line – we even prefer the binding Epiphone is using here to the tangerine stuff we see on so many Gibsons.

Where there are compromises, they’re largely cosmetic or easily rectifiable – for instance, if truss-rod cover bevels and textured plastic bother you, or if you must have 50s-style wiring. But regardless, with improved binding scraping and fret-end dressing, all three of our review guitars would come very close to scoring perfect 10s.