Taking inspiration from the late-’70s Les Paul Artisan but changing up the pickups, this latest Epiphone makes a very surprising signature model for a Sheffield metal guitarist. 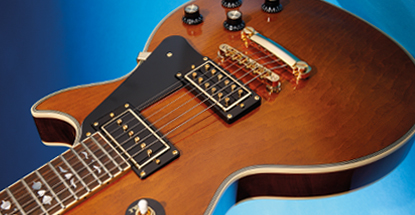 Maybe you haven’t heard of Lee Malia, and maybe you’re looking at this signature guitar, with its classy walnut finish, gold hardware and florid inlays, and thinking Bring Me The Horizon must be some sort of late-night jazz fusion combo. Check them out, daddy-o – but you might want to knock back the volume a few notches first… or hold the headphones an inch away from your ears. They’re quite loud, and really quite yelly.

If you have heard of Lee Malia, then you’ll know that Bring Me The Horizon are a melodic metalcore band from the deep south (of Yorkshire). They’ve been around for over a decade, which is certainly long enough for their chief axe-abuser to have earned a signature model. 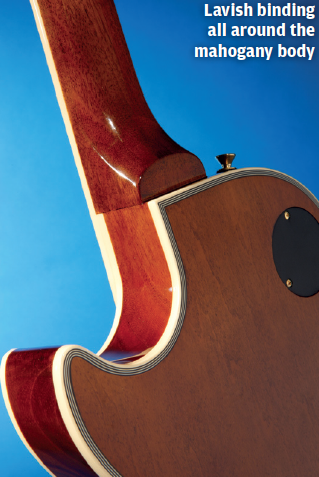 Malia’s guitar style is all about massive, tight, drop-tuned riffing rather than high-speed wizardry – which is good news for those of us who prefer to do our widdling at a urinal. Mind you, BMTH do cover a fair bit of stylistic ground, from the angrily angular to the symphonically lush, so would-be Malias need an instrument that can do much more than just low-down chugging.

The combination of walnut and gold feels warm and sophisticated, in a way that doesn’t necessarily go with Malia’s own wardrobe, and that’s accentuated by the opulence of the pearloid fret markers and headstock patterns – which seem to have been borrowed from the Gibson Les Paul Artisan of the late ’70s. There’s fancy binding around the headstock and both front and back of the body, while the simpler binding on the neck runs beneath the fret ends. 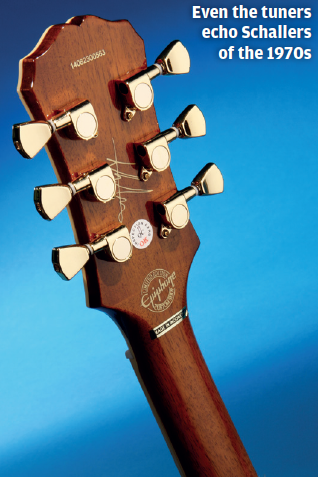 The one-piece maple cap looks nice but, looking at the guitar from the bottom, we can see the body is made from at least five bits of mahogany. There are no joins visible on the back; it must be a veneer, the cheeky scamps. The heel and headstock have been glued on rather than carved from the same piece of timber as the neck, and generally, while our review guitar came with a loose output socket and some less-than-perfect neck binding, the quality of finish is decent.

vy instrument with a moderately chubby neck, and the smooth feel of it in the left hand will appeal to tattoo-less blues players and cruise-ship strummers as much as it does to metalheads. Lee’s squiggle on the back of the headstock is the only giveaway if you’re more keen on the guitar than you are on the artist – and it really is a squiggle, so if your favourite guitarist is Tang from ZingZillas, you can always tell people it’s his, and they’ll never know.

Finally, let’s have a closer look at those pickups. There’s a humbucker at the bridge and what looks like a P90 at the neck – an arrangement that immediately calls to mind Duesenberg, especially with those uncovered bobbins and metal ‘frames’. But these are both American-made Gibson pickups: the neck unit is a P-94, basically a standard single-coil P90 with a humbucker footprint, and the one at the back is an 84T-LM. This is not listed on Gibson’s website, but assuming those last two letters represent Mr Malia himself, that would make this a specially commissioned version of the 84T pickup that Gibson originally made for the Van Halen-inspired Kramer 84.

Sounds
A good Les Paul has plenty of whump in the bottom end and a sweet click at the top, without too much clanging and scratching in between. Well, it doesn’t take long to establish that this – no matter how many pieces of wood it’s made of, where it’s been built or what it says on the headstock – is a good Les Paul. Going straight into a clean amp in the middle pickup position, we get exactly what we want from a Lester. It’s warm and full but not woolly, even on the low E string, and the tone stays solid right up to the 12th fret and beyond. The chiming high frequencies, meanwhile, are sonic tiramisu. 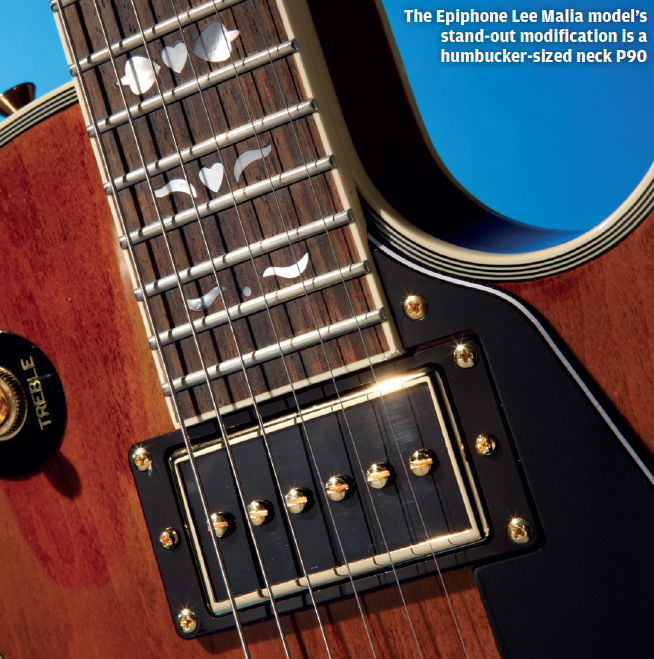 Switching to the humbucker on its own naturally slims things out, but it’s still musical and not too wiry – and the P-94 provides the perfect smokey-smooth contrast, as happy on a jazz odyssey as it is taking you down to the crossroads. Surprisingly excellent… and at this point you might well start to wonder if Bring Me The Horizon really are a late-night jazz fusion combo.

Just to make sure they’re not, we’ll tune to drop C sharp (anything lower starts to feel very baggy with the standard 10-46 strings fitted) and call in some mid-scooped distortion. Now the squiggle on the back of the headstock suddenly makes more sense than the one on the truss-rod cover: this Custom handles fast, low-down riffing with aplomb. Most players will be drawn to the bitey bridge pickup, but the middle position is also able to keep things fairly tight and will provide more gurgling fullness.

On a practical note, it’s worth noting that the strings behind the nut tend to resonate a lot, so to make those dramatic dead stops count you might need to consider a noisegate.
Now that we’re all here – Les Paul, high gain, tinnitus – let’s take a little detour up the fretboard. The solidity of the clean tone translates into fat, smooth, screaming lead lines, and the easy playability makes this a great guitar to show off on. Maybe it could even persuade Lee to take a few more solos himself.

Verdict
It would be wrong to call the Lee Malia Les Paul Custom a wolf in sheep’s clothing – and not just because that’s a terrible cliché. More accurately, it’s a sheep in sheep’s clothing that can also do fine wolf impressions: it looks like a distinguished old Les Paul and it sounds like one, which is quite a result in itself at this price; but the fact that it’s been made for a modern metal guitarist forces us to judge it in those terms too, and it passes the test with ease. There’s life in the old sheep yet. 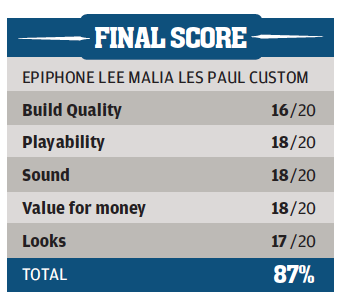