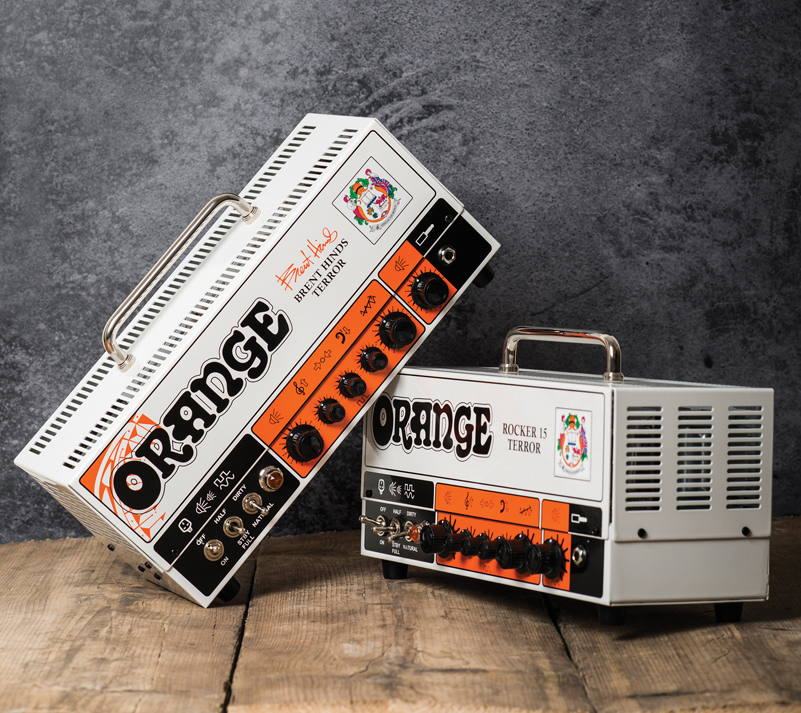 Unless this magazine has a crop of new readers in the tween age bracket, it’s safe to say that we can all remember the original Orange Tiny Terror. The TT was the head that kicked off the whole ‘lunchbox amp’ craze back in 2006, and went on to spawn a host of variant models and imitators before being discontinued in 2016. And now, from beyond the rocking grave, it’s spawned a couple more…

The basic principle of this Terror remains true to the blueprint: 15 watts from a pair of EL84s, switchable down to seven watts, in a compact white metal chassis. But it’s a couple of inches wider than its daddy, and the main reason for that is that it’s a two-channel amp. Plus, while the Tiny Terror stripped things right back with just master volume, preamp gain and a single tone control, this model offers a three-band EQ section on the dirty channel for precise tailoring of your overdriven tones.

In fact, hardcore amp geeks will have spotted that the control layout has been lifted directly from another discontinued Orange: the EL34-powered Rocker 30. This is no coincidence. Designer Ade Emsley’s real intention here, it turns out, was not so much to expand the legacy of the Tiny Terror as to create a half-powered version of the Rocker 30 in the lunchbox format. 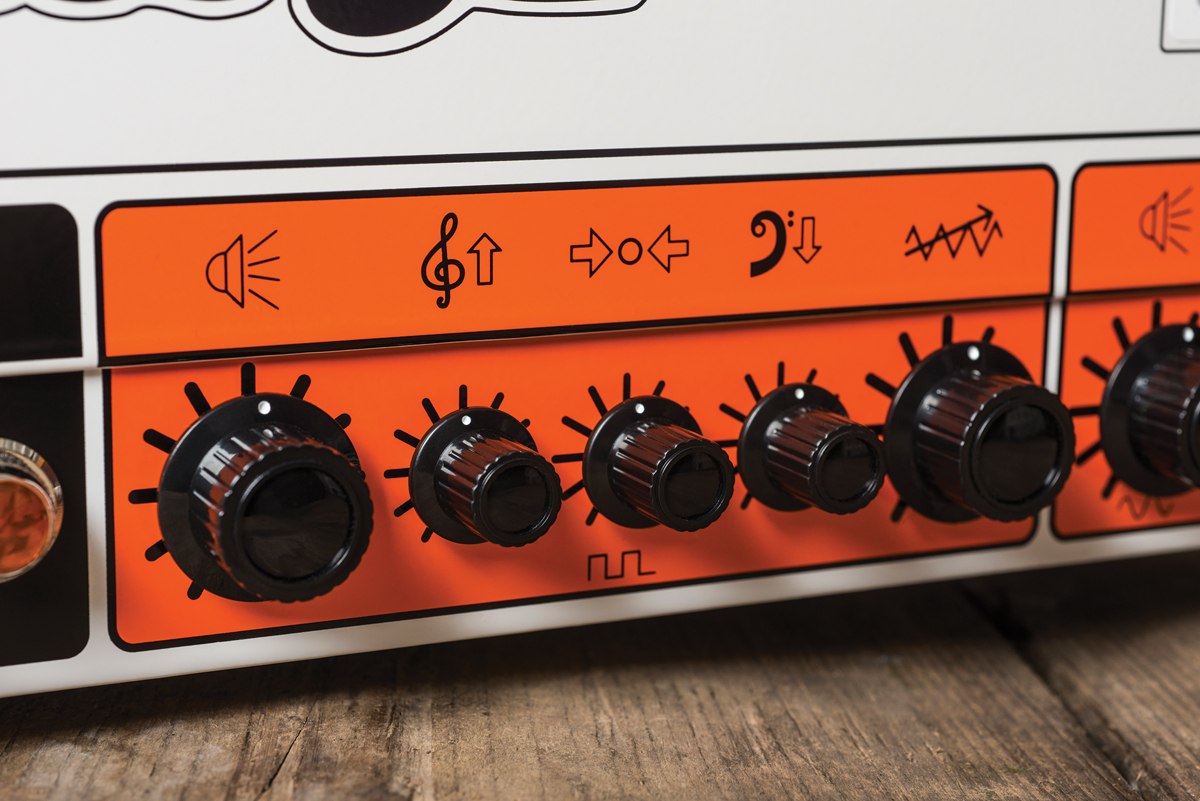 There are a couple of new features round the back in addition to the expected footswitch input for changing channels: a valve-buffered effects loop, and a slider switch marked ‘headroom/bedroom’ that lets you attenuate the output level to just one watt, or half a watt if you’re already in half-power mode.

If you don’t listen to prog metal played by men with ferocious beards, Brent Hinds is a member of Atlanta four-piece Mastodon. They’re mighty loud but also melodic and dynamic, so we’re not expecting a crude filth-generator here. The graphical theme, borrowed from Hinds’ distinctive head tattoo, is stylish but discreet, and extends to the markers around the knobs. 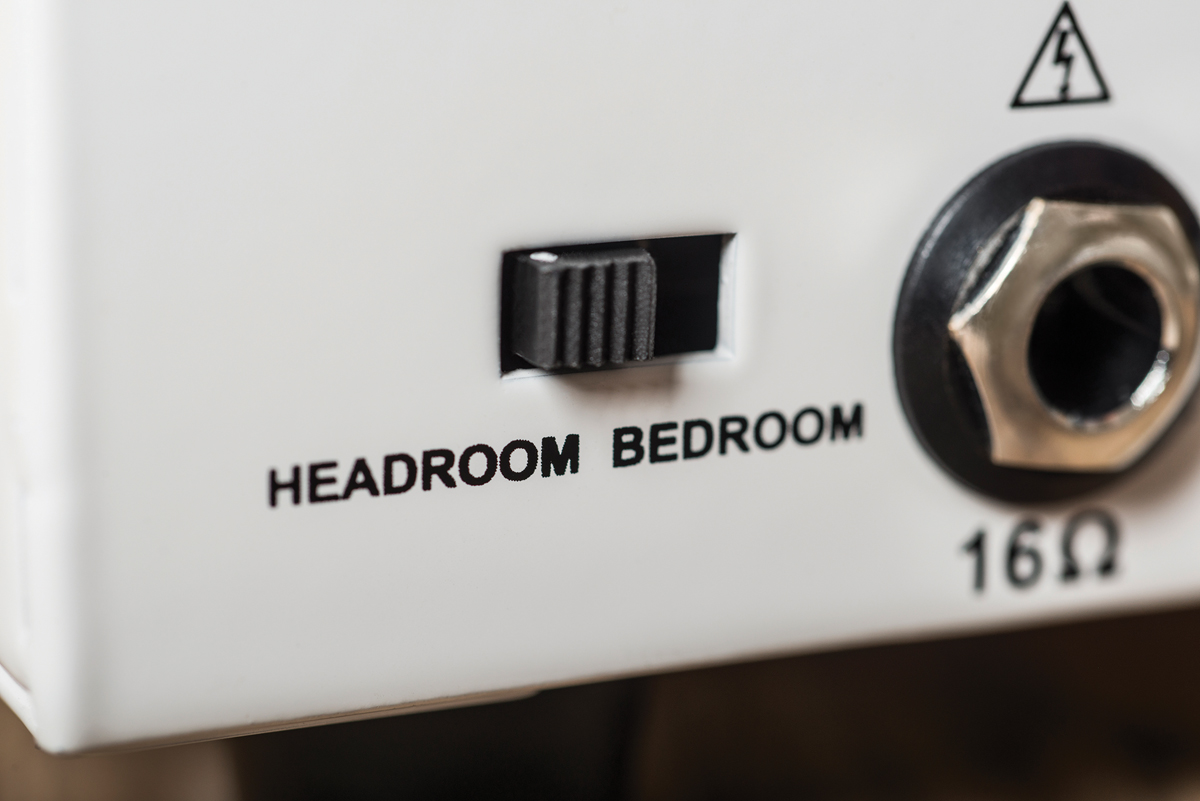 On the face of it, everything else is a perfect match for the Rocker 15 Terror: same dimensions, same control layout, same half-power and attenuation switches, same valve-buffered loop. We should also mention the build quality, which is entirely consistent across both heads: the metal enclosures feel super-solid, and the guts – despite the PCB-mounted valves, pretty much inevitable at this price point – are neat enough. Mind, it is a bit inconvenient that you have to undo 10 screws to change a valve and only four to get to the circuit board.

Did you notice the lack of a ‘clean’ channel on either of these amps? Orange has opted for the term ‘natural’ instead, and when we spark up the Rocker 15 Terror through an oversized 1×12 cab it doesn’t take long to find out why – this is about as clean as a student’s bedroom on the last day of term. Well, alright, there is a small window of undistorted tone with the volume set just high enough to be properly on, but by 10 o’clock things are already crunching up with humbuckers.

It’s not a bad clean tone, by the way, and it’s a shame there are no EQ controls on this channel to make more of it. But the name ‘Rocker’ is a fairly obvious indicator of what this amp is really about – and when the overdrive does come it’s classic Orange stuff. At full blast (still on the natural channel) there’s enough gain for full-on hard rock riffing, and big chords ring out with nice natural compression. Switching to half power doesn’t actually make things all that much quieter, but softens down the midrange clonk and turns the overdrive a tad more fizzy. 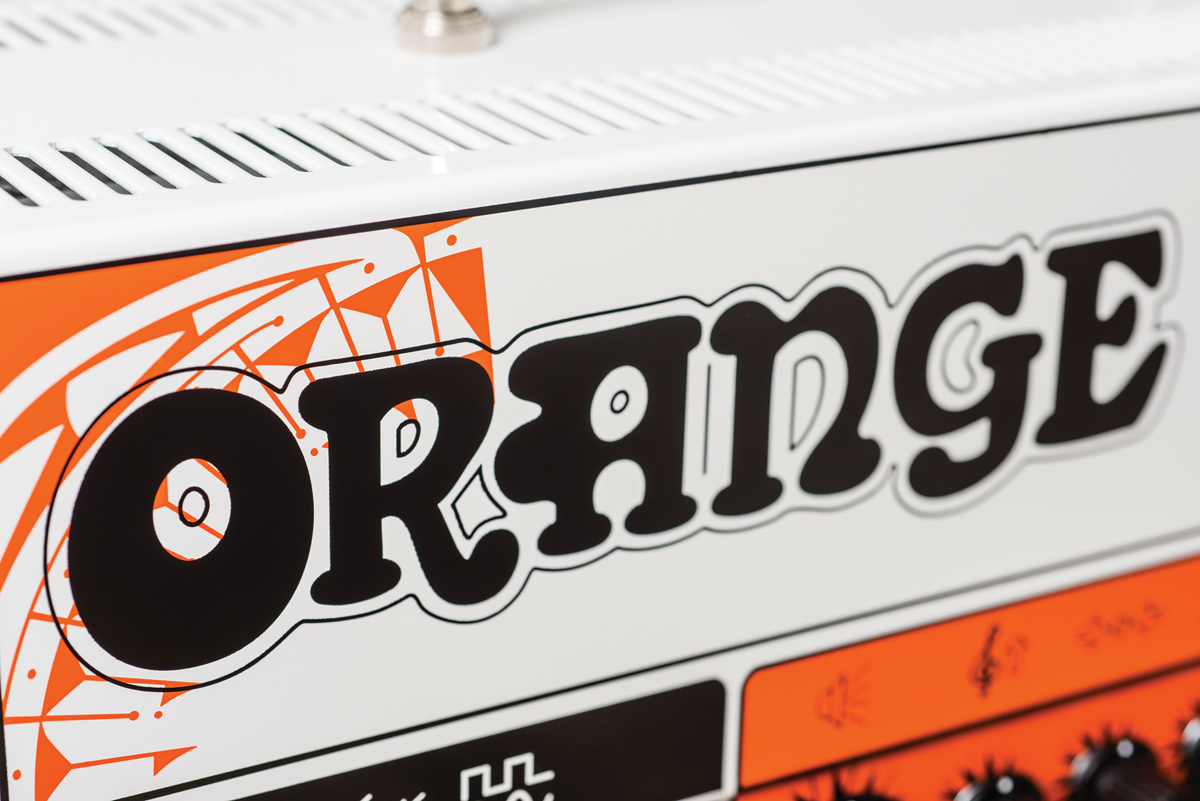 The dirty channel starts off rather tame after all that, but there’s plenty more to come. The vintage British drive gets richer and richer as you crank the preamp gain, and sounds even better if you’re free to turn the volume up to full for a bit of output valve distortion.

Whipping the mids down to zero and boosting the bass and treble, meanwhile, gives a more modern metal voicing that doesn’t sound forced but sits up and begs to be noodled at. The half-power switch makes a more dramatic difference to the perceived output level on this channel, and the ‘bedroom’ option takes things down even further without completely ripping the heart out of the tone – which could be great news for your neighbours.

The natural channel on the Hinds model really could have been called ‘clean’ – even with peppy P-90s it only starts roughing up around half volume. Maxed out it gets just as fiery as the Rocker, but there’s more scope for lightly overdriven picking around the middle reaches of the dial here. EQ-wise it’s about the same: clear and sweet but not exactly sparkly. 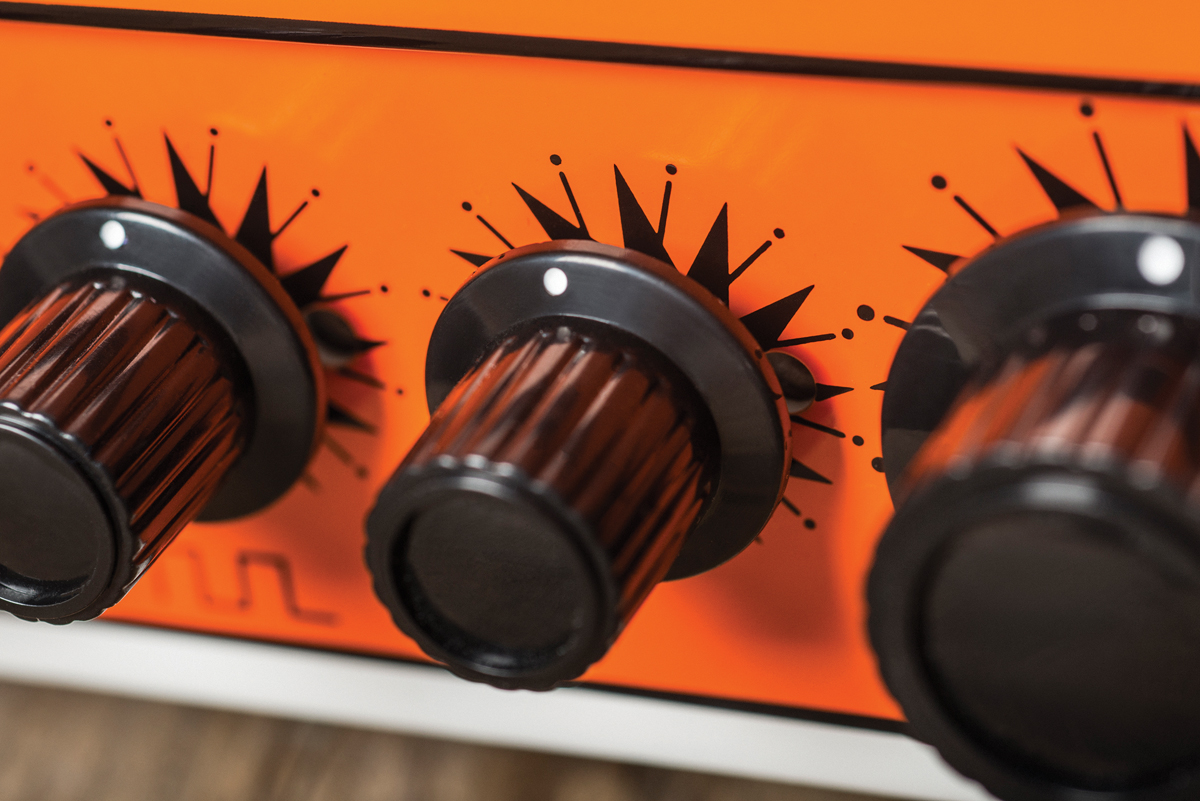 With all controls at noon on the dirty channel, however, this suddenly sounds like a very different amplifier. There’s no shortage of gain, and it’s likably smooth, but the voicing is very much mids-focused so it can sound bass-light. This is not quite what we were expecting… but there’s a twist. As soon as you start to wind up the preamp gain towards its upper limits, the bottom end fills out dramatically, balancing out those biting upper mids for a sound that’s as warm as it is fearsome. It records well too and sounds seriously meaty when double-tracked. 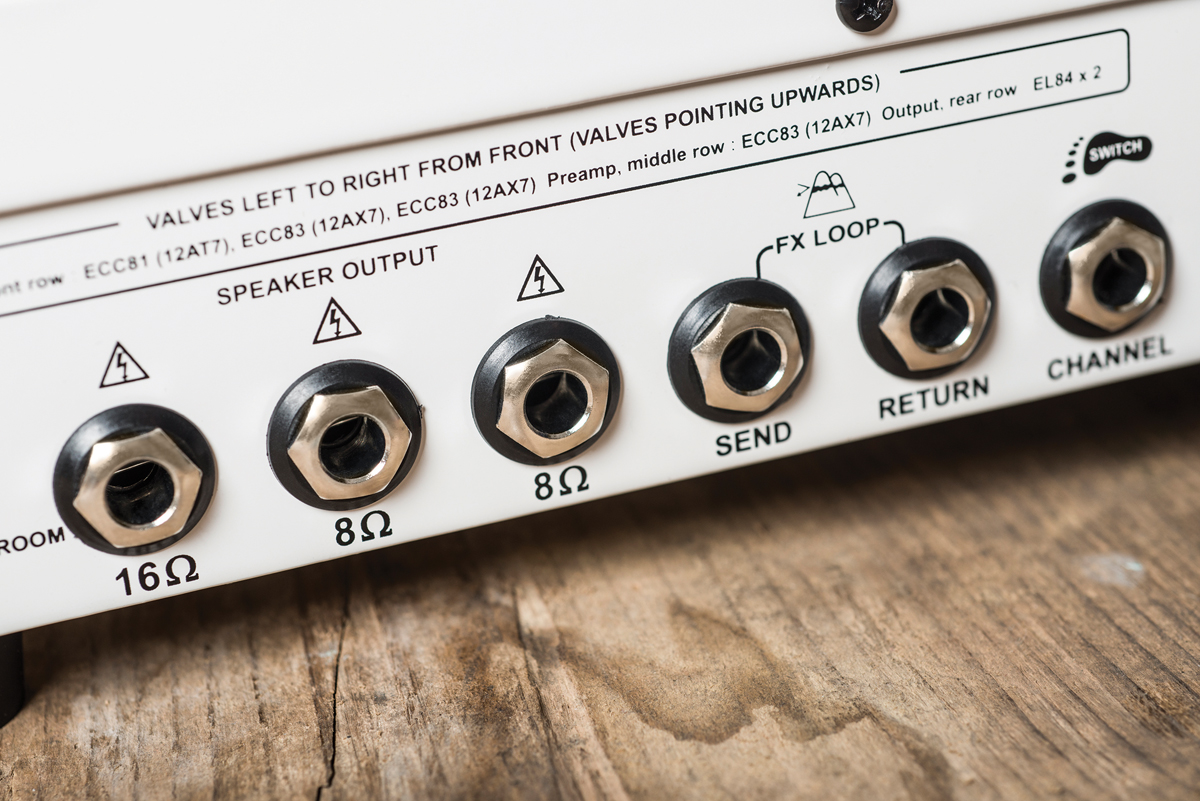 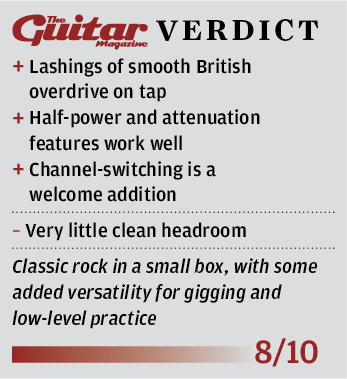 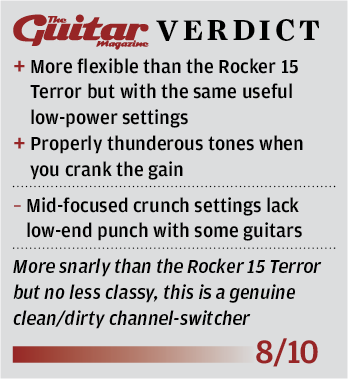