If overdrive is the final frontier for digital effects, then Strymon is the Starship Enterprise. 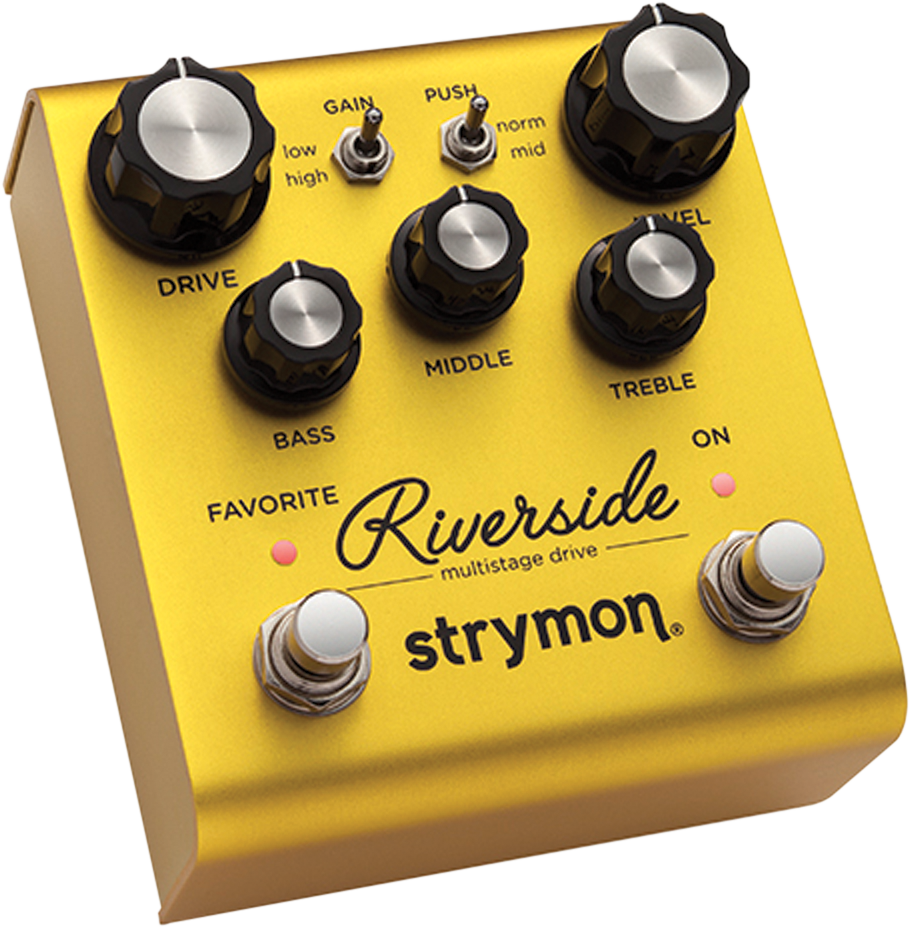 But the challenge with digital processing is always to match the warm, organic feel of analogue effects… and while Strymon and others are getting really good at that, emulating tape wobble is not the same as capturing the soul of a really good overdrive. This is a whole new challenge for the Californian kings of pristine digital performance.

Actually, the Riverside is not an entirely digital effect – the first gain stage is a JFET. But everything that happens to your signal after that, until it’s converted back to analogue on its way out, is down to a SHARC processor.

The main advantage of doing it this way is versatility – there’s no modelling of different overdrive types here, but as well as a three-band EQ section you get toggle switches for high- and low-gain circuits and a midrange push option, plus a three-way presence switch on the back. Holding down the bypass switch allows for tweaks to two more hidden toys: a noise gate and, if you have an external footswitch, an in-built boost of up to 6dB.

Even the drive control is not as simple as it looks – Strymon has used ‘continuously variable circuit tuning’ to allow a bunch of other factors, as well as the gain itself, to change as you crank it, so in theory you’re always in the sweet spot. Oh, and the left footswitch allows you to store and recall a preset, meaning you can tap dance between two different sounds.

Strymon Riverside in use

It’s technically illegal to let anything come between a Telecaster and a good blackface amp, but at low gain levels the Riverside makes a strong first impression. It roughs up the clean tone in a sweetly furry way, with plenty of clarity and no loss of touch-sensitivity. Flicking down the push switch adds a hearty helping of extra gain with the emphasis on chunky mids, but it still sounds completely natural and more or less transparent. What it certainly doesn’t sound is digital.

Still in low-gain mode, but with the drive close to full, snarly upper-mids begin pushing their way to the fore – and when we flip to high gain, with an eager Les Paul taking over while the Tele has a lie down – the harmonic saturation gets as intense as most of us will ever need. It’s still fundamentally well behaved, with no blooming in the low end or screeching in the highs, and the tightly grinding midrange has something of a JCM800 flavour.

If that aggressive voice starts to grate, however, there’s not much you can do about it. The tonestack lets you scoop things out to an extent, but none of those knobs and switches will really round out the lower mids, and at high gain levels it just isn’t possible to make the Riverside sound as big and smooth as our favourite analogue drives.

So if you’re looking for the ‘tweed’ switch, you should probably be looking for another pedal… but we suspect classic-rock and 80s metal fans might not mind that too much. 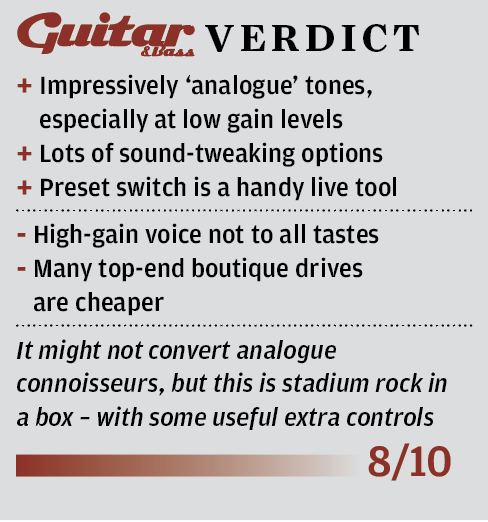