When is a Way Huge pedal not way huge at all? When it’s been squeezed into a compact enclosure. 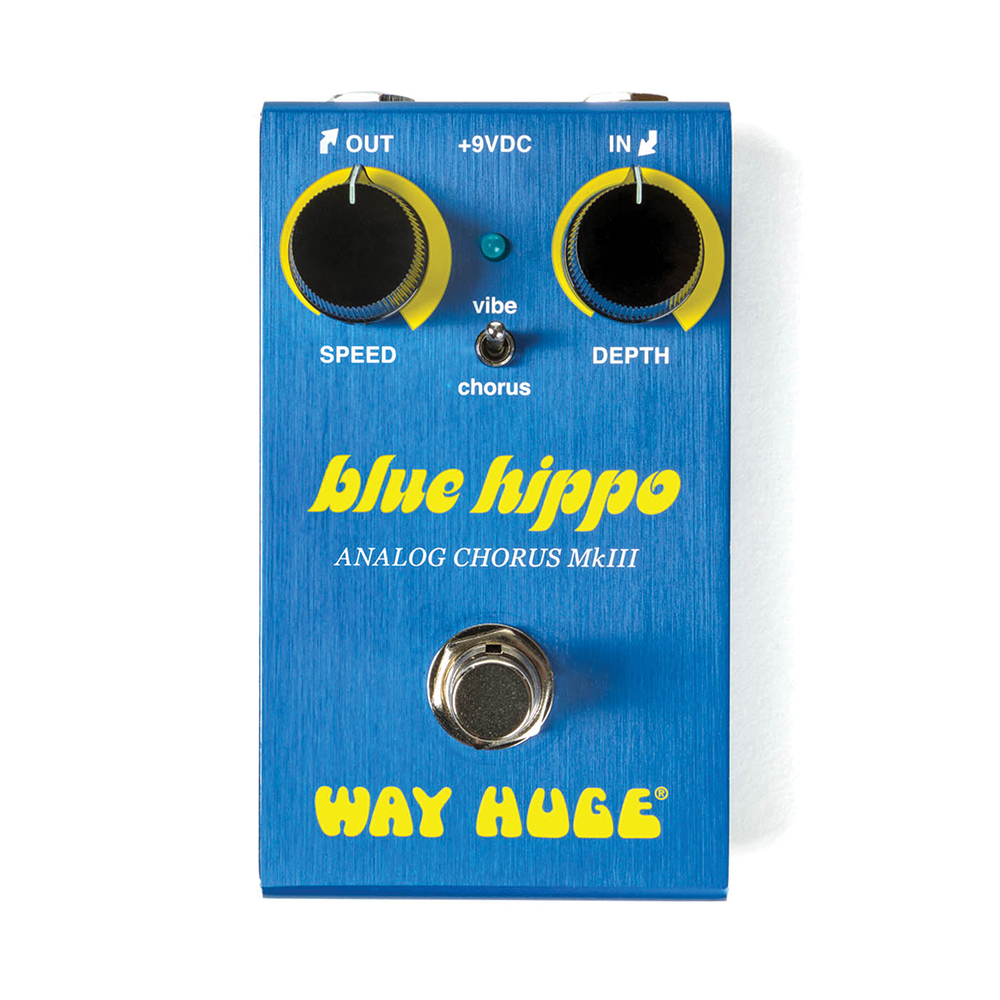 Let’s get this out of the way, no matter how much we might like them to be, these pedals are not a signature range in honour of Spinal Tap bassist, Derek Smalls. Instead, they’re much more broadly appealing – a new range of classic Way Huge effects shrunken down to more board-friendly proportions. The Smalls were launched to some excitement at this year’s NAMM show, and given that ‘Way Slightly Less Huge’ wouldn’t really have worked as a name, we’re left with the oxymoronic Way Huge Smalls.

One of the most respected indie makers of the 1990s, Way Huge is now part of the Jim Dunlop empire – but founder Jeorge Tripps is still very much on board on the development side. In fact he’s in charge of product development across all of Dunlop’s brands, including MXR and Cry Baby. So while these pedals aren’t ‘boutique’ any more – apart from anything else they’re made in Taiwan – with Tripps at the helm, and the promise of no circuit changes from the Mk II versions, we’re still expecting plenty of way hugeness in sonic terms.

The sound of a chorus pedal may never again be as popular as it was in the 80s, when it was often combined with an out-of-phase Strat to create some of the corniest music ever recorded. But there’s still a place for chorus, and the Blue Hippo Mk III is one box that’s doing a lot to restore its reputation.

Like the full-size Mk II, it has a toggle switch for hopping between chorus and vibe modes; other than you just get the familiar speed and depth controls. This is not a tiny pedal, just a wee bit smaller than the ‘compact’ template laid down by Boss and Ibanez back in the day, and there’s even room for a battery inside.

You might well know what’s going on with the Russian Pickle from the name and moody colour scheme alone; in case you don’t, the Russian Pickle is based on the dark green version of the Electro-Harmonix Big Muff Pi that was made in St Petersburg during the 1990s. The use of native components meant Russian Muffs had their own character – and while EHX’s New York production was up and running again by 2000, some still prefer the Sovtek version’s more beefy, growling tones. 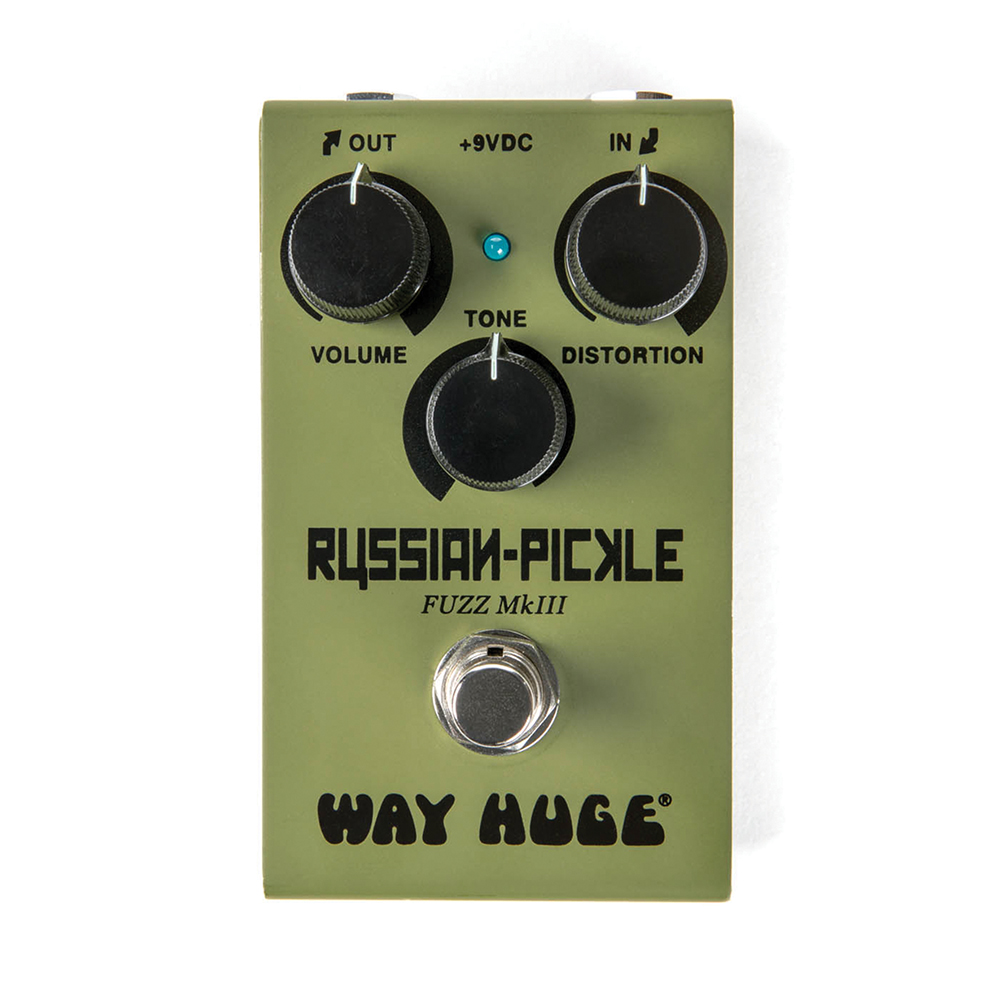 Way Huge’s tribute sticks to the classic three-knob layout, complete with pseudo-Cyrillic lettering for that distinctive ‘made from old Soviet tank parts’ look. Not that the originals actually were made from tank parts – that’s an urban myth.

Of the three, the Aqua-Puss needs the least introduction – it’s an analogue delay pedal that’s earned a place on the boards of such diverse guitarists as John Mayer, Noel Gallagher and Jeff Beck. Repeat times range from 20 to 300ms, and has the same three controls that most bucket-brigade delays have been using since the late 70s.

The first thing that happens when we switch on the Blue Hippo is that the noisefloor comes up so high we almost bang our heads on the ceiling. This is less than ideal, of course, and it’s something that we’re hoping is an isolated issue and not something repeated across the range. Luckily, it’s also not so intrusive that we can’t judge the pedal on its merits – and merits it most certainly has.

In chorus mode the modulation swirls in an almost Leslie-like fashion, adding real depth to clean tones, and you can push the depth without things getting too weird – although the tasteful, non-woozy stuff comes on the left half of that dial. That’s also true of the vibe mode, where this Hippo sheds a few textural layers for a more discreetly pulsating effect. It’s still something more than just straight pitch-wobble, but different enough from the chorus sound to make this a genuine two-in-one pedal.

The Russian Pickle also creates a lot of noise… but this time it’s because we’ve asked it to. For those of us who cherish all things Muffy, there’s only one thing this pedal really has to deliver: ultra-massive, ultra-smooth, ultra-rich silicon fuzz. Well, it delivers. You get all the low-end oomph you’d expect from a Russian-type, with a solidity in the lower midrange that contrasts with the fizzing, scooped-out voice of a US-made Big Muff Pi. The tone control lets you brighten up your earth-shaking mega-chords to taste, and does so without letting the velvety top end succumb to harshness. 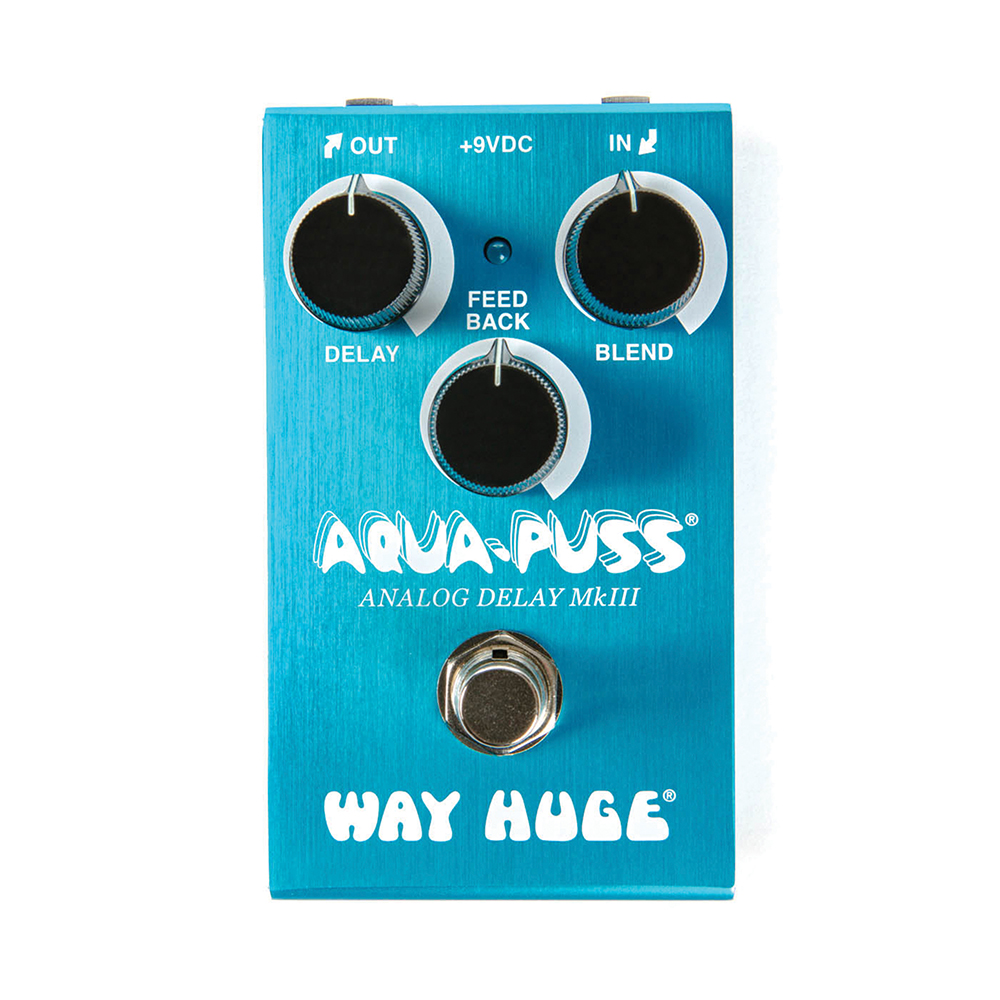 While the market for this kind of pedal is much more crowded than it was just a couple of years ago, not least thanks to EHX launching its own nano-size Green Russian last year, Way Huge’s compact effort is a lovely fuzz by any standards.

There’s not a lot to say about the Aqua-Puss MkIII, really, but that’s simply because it’s a very fine, very straightforward analogue delay pedal. It doesn’t go out of its way to win you over – there’s no bells and whistles such as switchable modulation, tap tempo or rhythmic repeats, for example – but it really is great at doing the core job of being a musical analogue delay pedal. The signal loses some top end with every repeat, inevitably, but this decay is less pronounced than usual – and that means you’re getting a combo of real analogue warmth with something close to digital clarity.

The maximum delay time of 300ms might be frustrating if you’ve grown used to emulated analogue delays with almost unlimited times, but crank the feedback into self-oscillation and you can get some cool percussive effects as the delay clock makes itself audible.
We find ourselves sticking close to that 300ms setting for the atmospheric stuff, but there are also some fine slapback sounds available near the other end of the dial. Calling it ‘versatile’ is probably pushing it a bit, but it offers a good range of sounds across its chosen spread, and for many guitar players, this will be all the delay you’ll ever need. 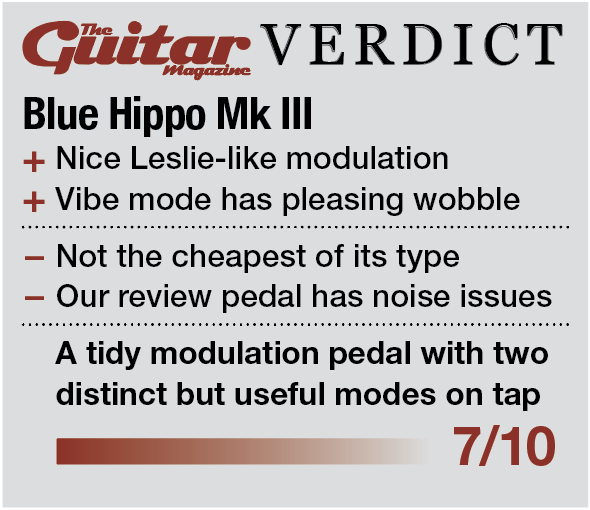 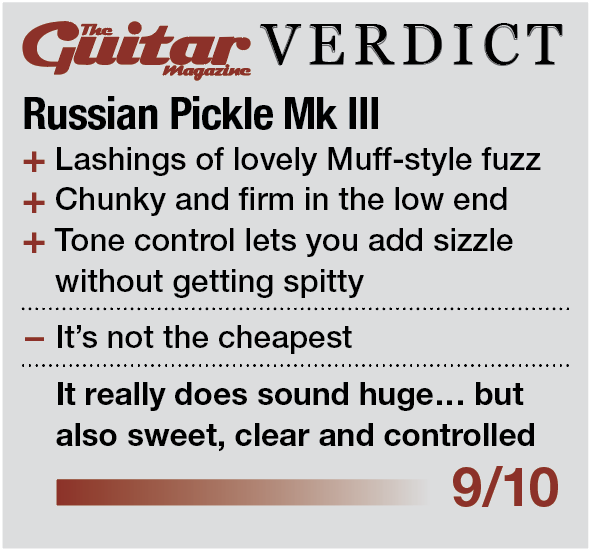 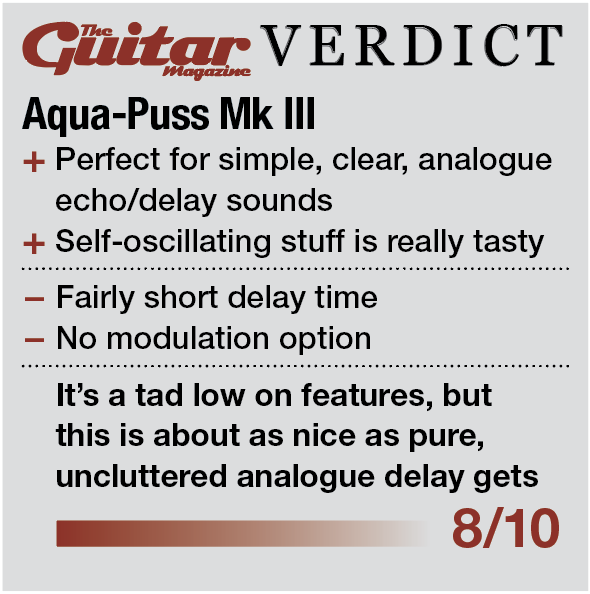