“If you ever want a really weird guitar, and you don’t know anybody else that has one, Dweezil Zappa will have one” – Bush talk sonic experimentation for new record The Art Of Survival

Bush’s ninth record is aptly named The Art Of Survival. But the longevity implied by such a name isn’t just a neat reflection of the band’s tenacious attitude: the LP as a whole arrives into a world racked with chaos, but its message is, despite the maelstrom, we as a species persist – not just Bush.

Such a topic for an album, especially now that Bush have embraced a harder, heavier sound, might be at risk of being 45 minutes of misery. But as frontman Gavin Rossdale puts it, the record avoids taking a “mournful or self-piteous” approach – instead, it’s “about the success stories of humanity’s survival against the odds. People just find a way to push through. We’ve all obviously suffered in varying degrees. I think the nature of life is the art of survival. Everyone is being tested all of the time, but we find a way.”

There’s not really a better time to highlight humanity’s resilience. Coming out of a global pandemic, there’s no let up in the global chaos. For Rossdale, The Art Of Survival encompasses it all – the pandemic, war, racism, and threats to women’s bodily autonomy. Along with Rossdale and lead guitarist Chris Traynor, let’s dive into five of their favourite tracks for the new record, and see how they crafted the polished, modern hard rock within.

Gavin Rossdale: “My favourite part is the opening riff – it’s just infectious and undeniable. It sets the tone for the record – it’s the precursor for what’s to come: heavy and snappy. [Producer] Erik Ron loves his Kemper. When I worked with him before, he was much more amp-oriented, but now I think Kemper has got it to a point where they’ve got a signature model with him, which he loves – so we were all about the Kemper on this track.

“More Than Machines was getting a song through the eye of a needle, and simultaneously, I really had been bothered about the whole issue going on around women’s rights. The label asked me for another track, and I was annoyed at them – because that’s just my ego – but my creative side said, ‘oh good, you know what? You didn’t nail this subject you wanted to tackle, and maybe you can make something more immediate – it’s constructive criticism.’ When people lay the gauntlet down to you, challenge you, it’s a win-win, because if you come up with something good, they’re right. And if you come up with something good, you’re right. And if you come up with something really really good, everyone’s right, even though your ego didn’t like the journey. That’s what happened.

Chris Traynor: “I love the pre-chorus because, to me, it sounds really big and rude and it’s kind of unexpected and an unusual part, especially for this band. Erik Ron laid down this 808 kick drum – very retro hip-hop. It really reminded me of Missy Elliot, so I was trying to think of something that would be like a guitar sample in a cool Missy Elliot song, and that’s why it’s so sparse and broken up. I wanted it to feel like it dropped into a hip-hop track for a second.

“A lot of Bush songs have slide guitar, and I started getting into fretless guitar because it’s like a slide, but it’s just a little bit of a different voice. I love that sound, so I borrowed Dweezil Zappa’s fretless guitar. If you ever want a really weird guitar, and you don’t know anybody else that has one, Dweezil Zappa will have one – he had three fretless guitars in his studio. So I borrowed one, and I did these overdubs with Erik because we wanted to make it sound pretty modern, but gnarly. We used an Electro-Harmonix Pitchfork – we pitched the sound up and down, and we used a fuzz, which is a classic kind of Bush thing, but with that sound. So it kinda ties into the history of Bush, but it’s a more modern take on it.

“I love using guitars that aren’t mine or that are new, because every guitar has its own song in it, so it was really cool to borrow that guitar from Dweezil.” 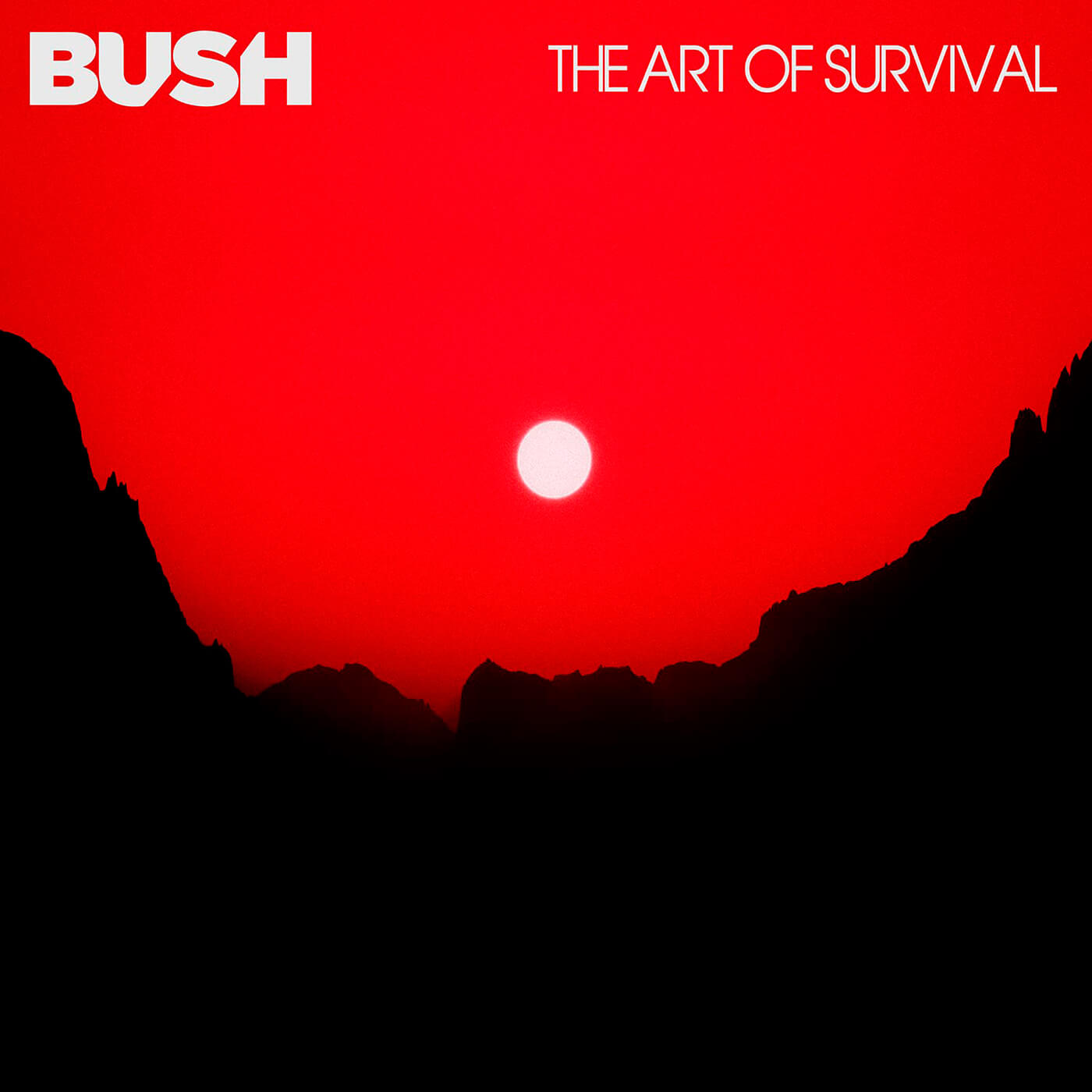 Heavy Is The Ocean

Gavin Rossdale: “The main riff is my favourite guitar moment of this track. It was such a massive sound, and when I got that, it was funny, because I’ve never written a song before where I was really clear that it should open a record. Like, this really sets the tone, the intention of the record – this is the vibe.

“Writing this, I was really just being experimental, exploring, challenging myself, finding out what all my drum programs could do. Nick DePirro, who’s a great guitar player, he introduced me to Neural DSP, so I’ve entered that world. I did all my guitars on Neural. My friend Tosin Abasi – I used his guitars on the record – has a plugin. And Gojira have a really great setting. And you know, you start with a sound – someone gets an amazing sound and then you modify it, you make it your own.

“That was a turning point for me, because I’ve usually got like three or four amps connected trying to make it happen, but basically going for the same sound, and then when I came across this new stuff, I was like – I dunno about my amps anymore, this is really good!”

Chris Traynor: “Right at the very end, I think on the last day, I was doing the guitar tracks and the bridge of this song – I did this kind of octave up pitched guitar sound that really elevates it. I was just listening to it this morning and I love it, it’s a cyclical theme that loops over the chords that are going on underneath. I think it really takes the song into a different place, because the song is so heavy, and you need that break, that kind of lift.”

Gavin Rossdale: “The way that I originally had it, it was a real long bass intro and I had all these vocals on it, and it was beautiful. And I went away, I went off to a baseball game, and I came back and Chris and Erik had completely changed it. Suddenly it opened with the vocal and then went into the big intro. That wasn’t my preferred way of doing it – I had a more sinewy, Peter Gabriel beginning, and they went for a slam-dunk beginning.

“I mean, I get it – I get what they did, but I still prefer my kinda Gabriel beginning! I think the intro sets the song up great, but I love long basslines – I grew up on dub, so for me, having a long bassline that goes round and round for ages before a song starts is normal. I don’t have to have an orgasm as soon as a song starts.

“It’s going to be weird [when we start playing this one live] because I’m always going to have to be at the microphone when the song starts [laughs] which is not my favourite thing to do. But in and of itself, that’s a good thing – because it’s different to everything else.”

Chris Traynor: “We did a lot of stuff with guitars on this record that was kinda soundscapey and trying to, again, trust Erik and do stuff that’s more modern. So there’s a lot of stuff on this track that doesn’t sound like guitar but is. In the chorus, I used – ironically, a ‘63 Gibson SG Junior with a P90, which is a very old sounding guitar, but I used it for all these chimey effects in the choruses and in the intro, which sound like keyboard pads. And one of the tricks that I did on this song in particular, is I’ll play a guitar part and then I’ll double it with the keyboard. So it kind of mixes in so you can’t tell.”

May Your Love Be Pure

Chris Traynor: “I love the breakdown of this one. It was something that was inspired at the last minute when we were doing pre-production before Nick came in on the drums. It has a lot of frenetic energy, and then really opens up. One of the things I absolutely love, Nick, on the re-intro of the verse, just plays this incredibly cool beat where he’s partially using the rims of the drums, and that is super inspiring to me. I think the song is in 6/8 – somebody will probably correct me, but I’m pretty sure it’s not 3/4, it’s 6/8 – and I love that feel. I’ve always loved that kind of feel and bands who’ve done that before – Quicksand, Tool, Helmet. Gavin, when he wrote the base of that track, the meat of that initial riff – he has a really cool computer-y part, computer noises that are going on in the verse.

So when I came in, I just basically added on top of that a little bit more movement on the riff in the chorus. I think it harkens back to old Bush – there aren’t a lot of parts on old Bush songs. Like, Little Things – it’s basically one set of chord changes. When Gavin and I went on tour opening for U2, I was amazed that all their songs are just one part, and they just do dynamics – they go up and down. That was a real lesson for me. This song has that – different variations on a theme.”

Gavin Rossdale: “I have a rock career that’s never gone down the blues [path], and yet this is probably my most bluesy riff. It’s right up there with like, well, I wish it was like Stevie Ray Vaughan met The Black Keys!

“Each song is there to exist on its own and yet compliment the others. The record is really consistent – there’s two mellow tracks because nobody wants to be riffing for an entire record, that’s ridiculous. So just for the sake of decorum and dynamics, there’s a couple of mellow songs in there to pull at your heartstrings – if you have any feelings. And if you don’t, they won’t. If you just care about guitar, you won’t care about those songs!

Bush’s The Art Of Survival is out now.