“I’m doing everything in my power not to sound like QOTSA”: how Brighton punks CLT DRP are forging their own path 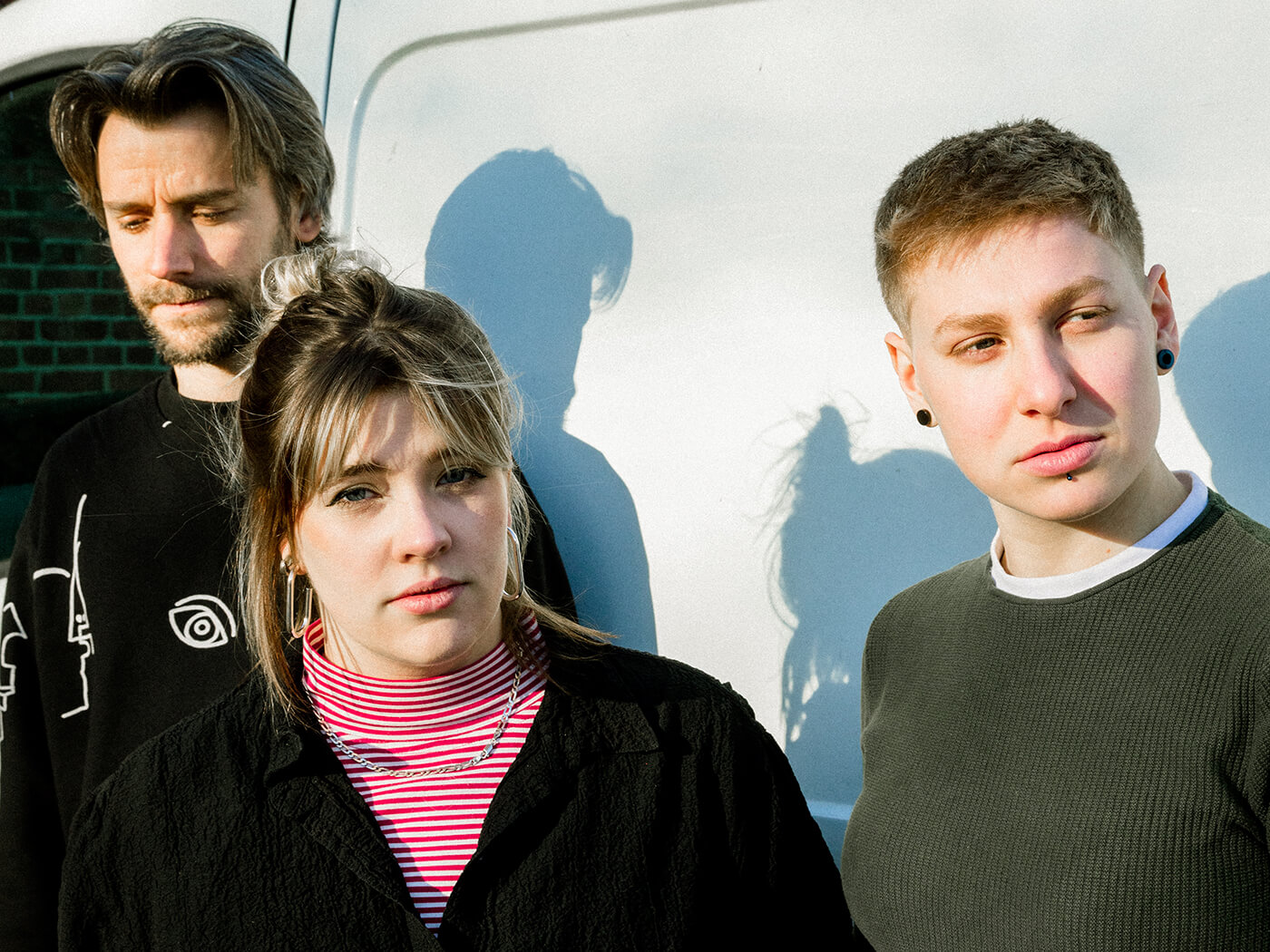 It seems every time guitar music is at risk of getting stale, somebody comes along to give it a much-needed shot in the arm. Innovators like Hendrix, Tony Iommi, The Edge, and Tom Morello have all challenged and reshaped what it means to be a guitarist. And in 2020, it looks as though CLT DRP’s Scott Reynolds is doing his bit to push the envelope.

While that may sound like hyperbole, the Brighton-based trio’s new album Without The Eyes is offers a refreshingly different take on the punk formula – coupling aggression with electronic soundscapes and danceable beats, electro-punk seems to be the label most settle on, though it doesn’t paint the full picture.

Loaded with atmospheric dissonance, electro glitches, and almost dubstep-style drops many will be surprised to hear that CLT DRP’s sound is composed solely of guitar, drums and vocals  – in a way that reminds you of the ear-defying experience of listening to Rage Against The Machine for the first time and wondering just how they do it. 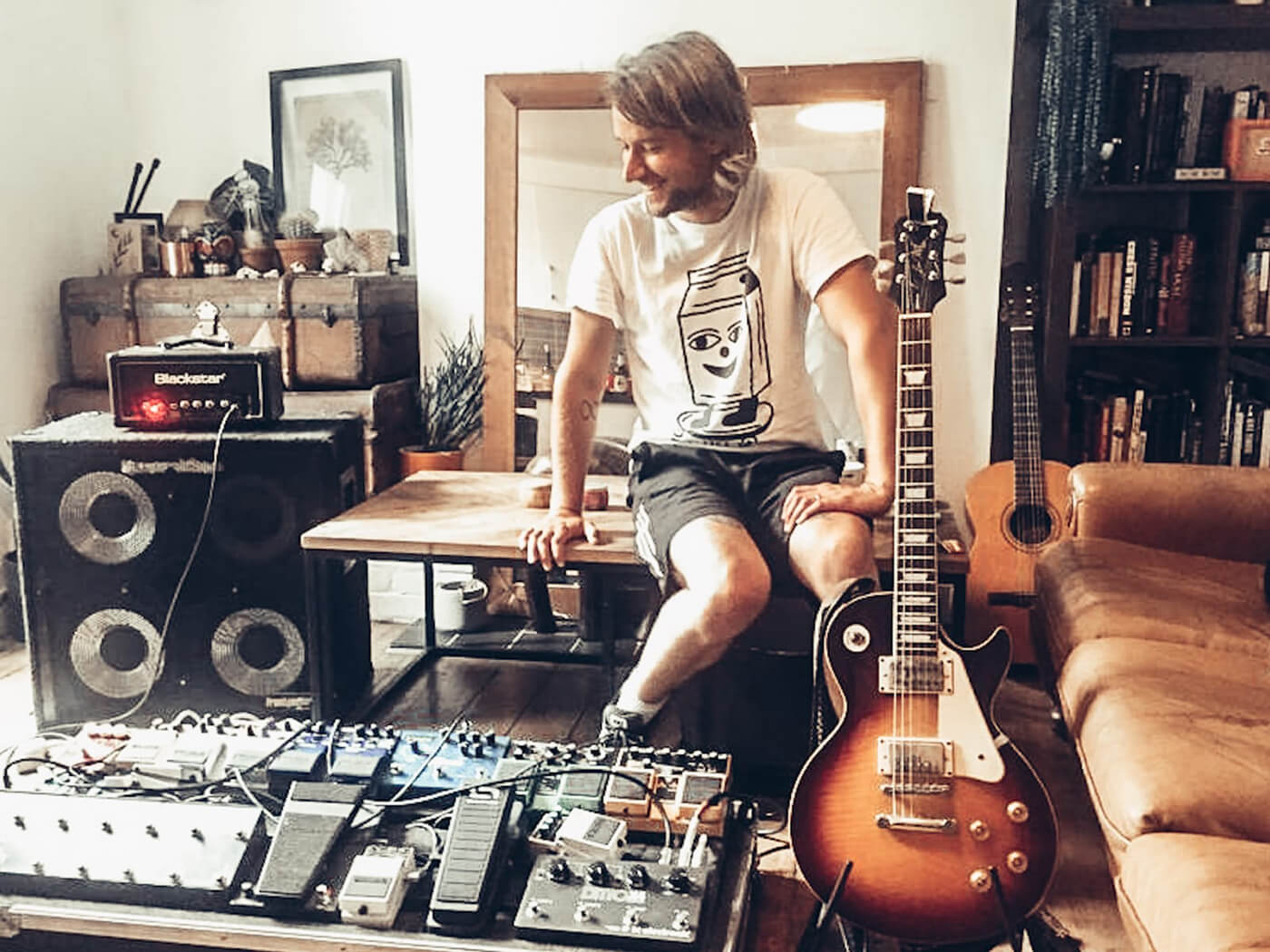 And just like arch sonic innovator Tom Morello, a lot of the inspiration for Reynolds’ playing comes from outside influences.

“When it comes to the music I make, I’m really just trying to make electronic music on the guitar,” he says. “I had been playing guitar since I was seven and I liked a lot of the usual stuff you’d call guitar music, like Guns N’ Roses and Metallica but there was always something about electronic music that just did something for me that standard guitar music didn’t.”

Though he’s an accomplished guitarist with a solid grounding in country, having studied the likes of Albert Lee and Brent Mason, Reynolds has definitely employed a rip-it-up-and-start-again approach to his own style; taking more inspiration from the likes of The Prodigy than contemporary guitar bands.

“It’s just how I see songwriting I guess. Some people are really focused on melody and harmony, and focusing on keys. And it’s not like I’m totally neglecting that, but it’s not my focus. My focus is on rhythm, and the sound. But mainly sound.” he says. 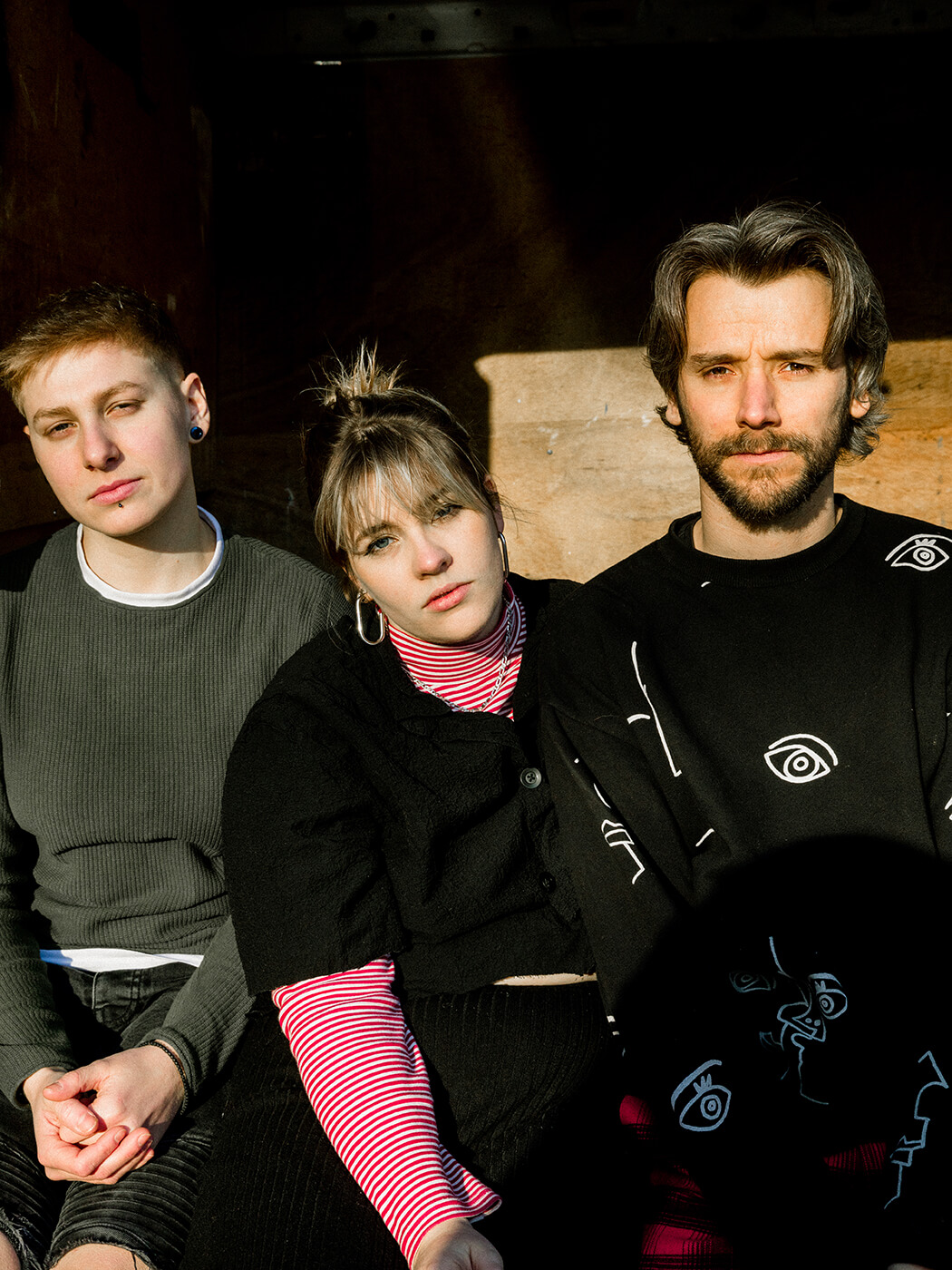 The sound Reynolds was going for in the initial stages of the band was “a combination of Meshuggah and electro house” and while he says he may have failed at that, alongside vocalist Annie Dorrett and drummer Daphne Koskeridou he has crafted something really distinct.

They are heavy and often abrasive, but at the same time incredibly melodic, and at the heart of everything there is an unmistakable groove with beats that change on a dime. They are challenging and uncompromising but also a hell of a lot of fun, which separates them from a lot of their peers.

Meeting at the British and Irish Institute of Modern Music (BIMM) in Brighton in 2017, there was an instant connection the moment the three started playing together.

“We literally wrote a song straight away. Daphne is incredible. The chemistry is amazing, I can just play her a riff and she’ll just find the right groove. And Annie has been amazing at putting these incredible melodies over the top of whatever noise I’ve brought in.”

How Reynolds makes his noise is an interesting process aided by several key tools. Firstly, as there is no bass player in CLT DRP, to get that big low-end sound he is running through a Hartke HA3500 bass head and two 4×10 bass cabs, as well as a Laney GH100L head with a 4×12 custom cab.

Secondly – and perhaps most importantly – is his pedals, of which he counts the Boss SL-20 Slicer and the Strymon Mobius Ring Modulation among his favourites.

“The Mobius was a bit of a game-changer in a lot of ways because there are so many ways you can change the texture of your sound. I can’t really put it into words about just what I love about it so much. I wanted a filter for drops and I remember seeing a really good YouTube demo and I remember thinking the filter just sounded great on it, but it’s just kept giving. It was – and still is – an infinite source of inspiration for different textures.” 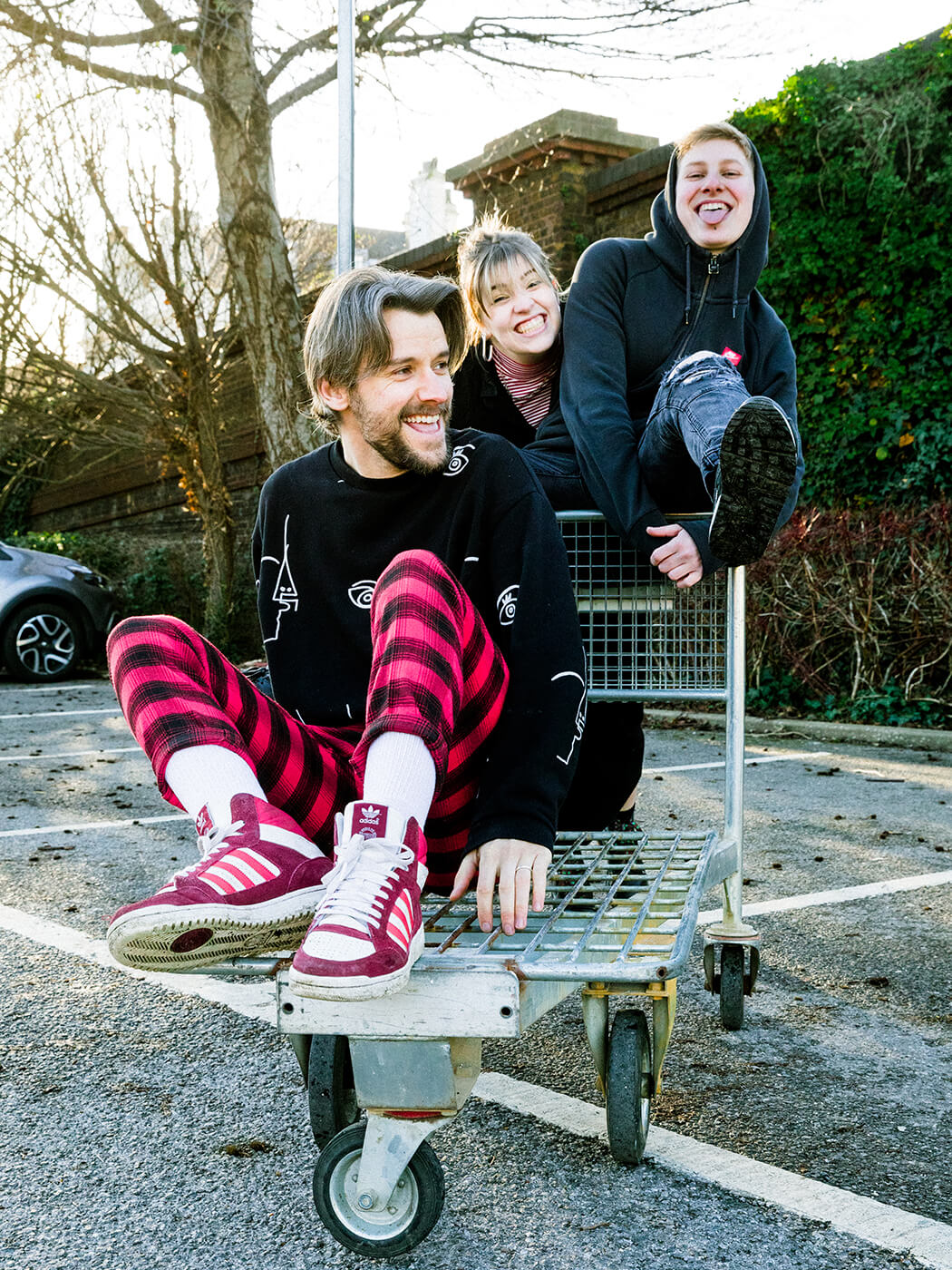 A huge fan of stacking, Reynolds’ sound has largely been shaped by how his pedals interact with each other. While he is regularly running his Slicer, Mobius, Boss DD7 and Boss OD-20 alongside each other, he found the Wampler Ego Compressor was actually crucial to the performance of everything.

“I didn’t realise how much it changes the sound of other pedals until I started using it. So when I use it alongside the Mobius, it drastically changes how the ring mod sounds. If you dial back the gain before going into a delay, for example, then it is much more effective than just having it turned full on, so I think that’s basically what the compressor does for me. I didn’t realise how affecting it was until I took it away one day.”

Ultimately it’s Reynold’s distinct use of effects that define the CLT DRP sound and him as a player right now. Traditional guitar playing is just not on his mind. 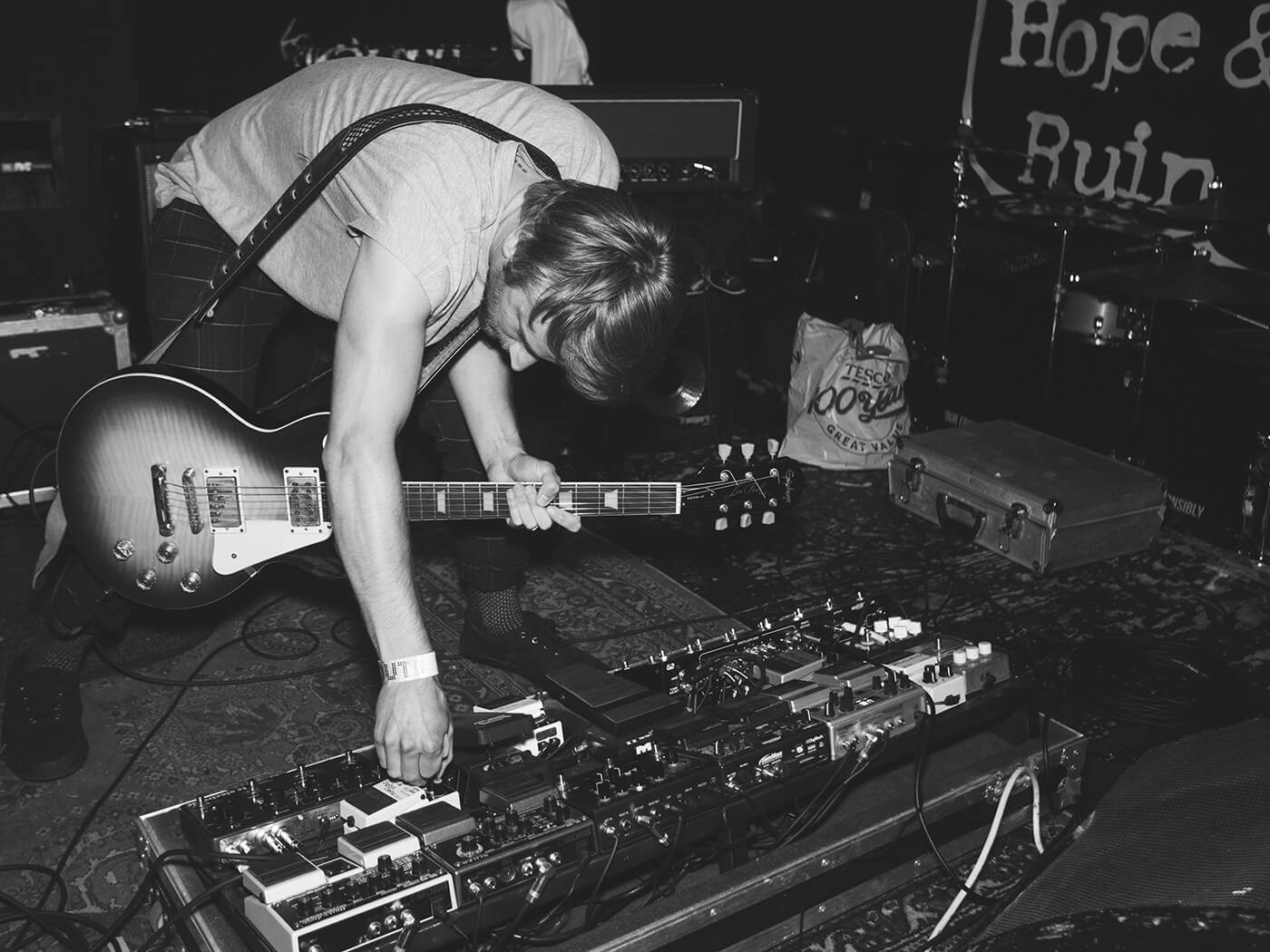 “I’m not really a guitarist in that sense, that stuff takes a back seat in a lot of ways,” he says.

“I’ve had this guitar (Epiphone Les Paul Standard) since I was about 11. If I had the money, I’d love to get a Gibson SG or something, but I don’t yearn for it like I do pedals. For me, spending $300 on a pedal can do a lot more for me than spending $1,200 on a nice new guitar.”

While it may not be for traditionalists, Reynolds’ approach has yielded interesting results and CLT DRP is a stunning example of what guitar music is capable of being today.

Their new album Without The Eyes is out now.