It seems like Tobias Forge can do anything. It was his ingenuity that birthed the concept of Ghost: a solo outfit masquerading as a Satanic cult, led by a skeletal pope. It was his songwriting chops that made them the fastest-rising metal band of a generation. And it was his theatrical showmanship that made them a must-see live act across the US and Europe.

However, according to the man himself, there’s one thing he can’t do: play lead guitar. For that, his band borrowed Fredrik Åkesson of prog titans Opeth, whose lead lines are all over fifth album Impera. To get an inside look into their collaboration, Guitar.com sits down with Tobias and Fredrik to discover how they united and what the future holds for both their projects.

Tobias, when did you first hear Opeth? What were your thoughts?

Tobias: It must have been around their first album [1995’s Orchid]. At the time, I was very much an avid black and death metal fan. They weren’t as distinguished then as they are now. They definitely stood out as an oddball but they weren’t as punchy as they later became. Then, as they progressed – especially with Blackwater Park and Ghost Reveries – it was like, ‘Wow! This is a really strong band!’

Fredrik, when did you discover Ghost?

Fredrik: 2012. We did a tour with Mastodon, and Ghost were opening on that bill; they had released their first album [2010’s Opus Eponymous]. There was a big buzz about the band at the time. The imagery was so interesting; Tobias was dressed as the Pope and had incense on stage. We were curious, because there were a lot of myths about the band. I love that stuff.

Tobias: That was one of our first big American tours and we [Ghost and Opeth] became very good friends. We’ve been close ever since. We hang out a lot at home. We have Christmas dinners together, with the wives and kids.

That tour would have been before the world knew Tobias was Papa Emeritus. How closely guarded was his identity backstage?

Fredrik: He revealed his looks to the other bands, but he was very picky with journalists and there were no photos. 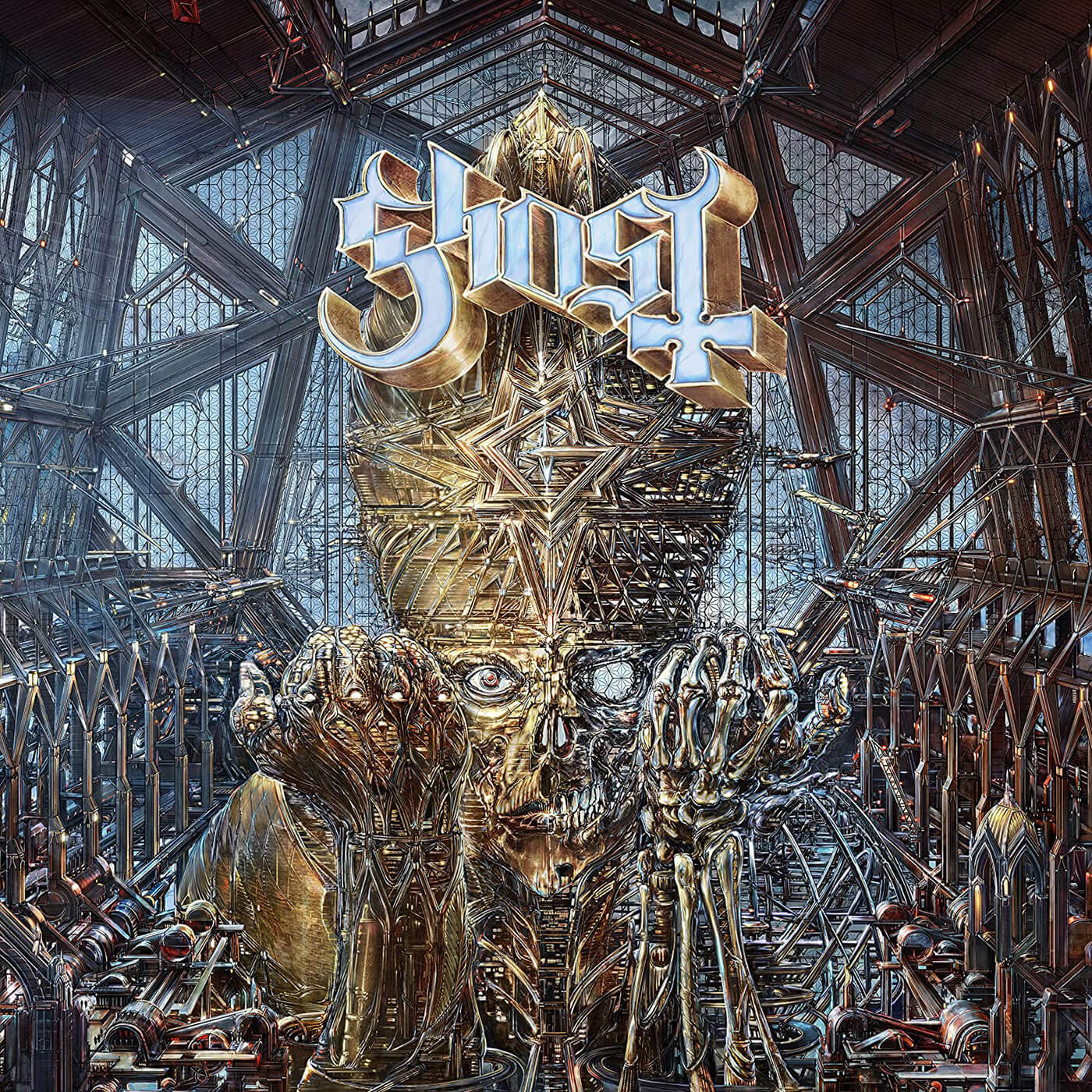 Opeth used to be a death metal band and, Tobias, you used to play death metal in a band called Repugnant. What are your relationships with that genre nowadays?

Tobias: I stopped making death metal simply because we weren’t going anywhere. When we started recording in 1998, I wanted that band to be a mixture of Slayer, Possessed, Necrophagia and 1980s Morbid Angel, which was completely not what was happening in music at the time. We were rejected by every fucking label. When we called it quits, we felt like such a side note; we didn’t mean anything, except to a few people.

Fredrik: I’m glad that the first Opeth album I played on [2008’s Watershed] still had the death metal elements. I wouldn’t have minded carrying on with that but I like the fact that we’re being unpredictable. We still do those songs live and I think Mikael’s [Åkerfeldt, Opeth’s singer and guitarist] growl now is probably even more horrific, in a good way.

Tobias, you’ve said before that you’re not a virtuoso guitar player, more a jack of all trades when it comes to instruments. So why doesn’t Ghost just have a permanent guitar player?

Tobias: The simple answer is that the people that work with me live aren’t necessarily the ones that I would ask to come and play with me in the studio. I don’t have to cherry-pick among my live group, saying, ‘I want you but not you’. I’ve done that before and it did not end very well [Tobias was sued by four former Ghost members in 2017]. So when I restarted everything it was like, ‘There’s gonna be a clear distinction between the people that I have on tour and when I make my record’. That way, everybody’s equally not invited! [laughs]

Why was Fredrik the man to play leads on Impera? Was it just because you’re friends or was there more to it than that?

Fredrik: It started off with Tobias contacting me to do a cover of Enter Sandman by Metallica [Ghost’s contribution to 2021’s Metallica Blacklist tribute album]. I think that was the thing that sowed the seed for him asking me to put the leads down on this album. I ended up playing all the rhythms as well, and the acoustics. Everything basically.

Tobias: When I ask someone to come in, it’s not like, ‘Here are the songs; please interpret them and add your flavour’. When you’re working with me, I’m going to be very, very, very specific and very, very picky. We went through a bit of a phase where I was trying Fredrik out, just to see how well he could adapt. He was given a ton of demos and those demos already had four layers of guitar. I’m pretty steady when it comes to playing rhythm together with drums and bass but my licks are not what they could be; I don’t practise enough. Fredrik practised for five hours every day.

Fredrik: It was very different [to recording with Opeth]. It was more of a session job. I thought I was going to be able to design a few solos but they thought they were over the top. I had to scale it down, with more melodic solos – more constructed. Tobias and Klas [Åhlund, producer] were very picky. I haven’t really done that kind of recording before, where I’m being so analysed in everything I do. I didn’t have a problem with it; I thought it was pretty interesting.

Would you record with Ghost again?

Fredrik: Yeah, definitely! In the end, I had a good time. I’m very picky also when I record stuff so I liked the focus on the details. I never put down so many layers of guitars in a recording before. Some tracks, there could be 16 channels of guitars. Some rhythm packs were, like, eight guitars. It was like craftsmanship, getting these massive walls of guitars done.

Talk us through the guitars you used on this album.

Fredrik: It’s quite a long list. For the four basic rhythm tracks, we used an early 80s Gibson Explorer, a Strat – ’78, with a maple neck – a Gibson Flying V from the early 80s and a black Les Paul. Those were all Tobias’s. I also brought in some of my own guitars for leads. We had a PRS 24 Custom for the more high-tech leads, and a 1970s Strat. Also I brought in my Black Beauty Les Paul from 1977.

Why was it important to have so many classic guitars?

Fredrik: These old pieces of wood, they have something that just cuts through the mix. There’s some magic about them.

The album’s first full song, Kaisarion, opens with flashy Van Halen-style tapping and a glam metal wail. That’s new territory for Ghost. Why did you want that to be the first thing people heard?

Tobias: That’s why! [laughs] I wanted it to be a full-on adrenaline shot. I wanted the album to open with a bang and I instantly knew Kaisarion would be the track; it felt strong, uptempo and immediate.

Ghost is a band that’s gradually evolving from doom metal to making these gigantic pop-rock anthems. Is there an end destination in mind? Is there an ‘ultimate’ version of Ghost that you envision and are working towards?

Tobias: Yes and no. We’re still in the position where a new record [will inform] the overall impression of the band. If they didn’t want to, the Rolling Stones wouldn’t have released a new record in the last 50 years. People would still worship them. We’re still at a point where the record means something and that’s not going to be forever. At some point, you’ll turn into a nostalgia band and that’s fine. Right now, we have a plan up until 2025. I already know what I want to do, what I want to make and how I want the next record to sound. I know the title of the next record. I know what the cover’s gonna be. I know what we’re gonna change and what we’re gonna do live. I have a plan but it’s not the endgame.

And what’s next for Opeth?

Fredrik: We’re still in the mindset that we’re touring our latest album, In Cauda Venenum – we just had to pause for two years [laughs]. We’ve been talking about the new album but we haven’t rehearsed anything, Mikael hasn’t played anything. Since we have a lot of touring this year, I think we’ll start with the new album next year.

Impera is out now via Loma Vista.