Sima Cunningham and Macie Stewart discuss the excitement of diving into unfamiliar territory on the electric guitar. 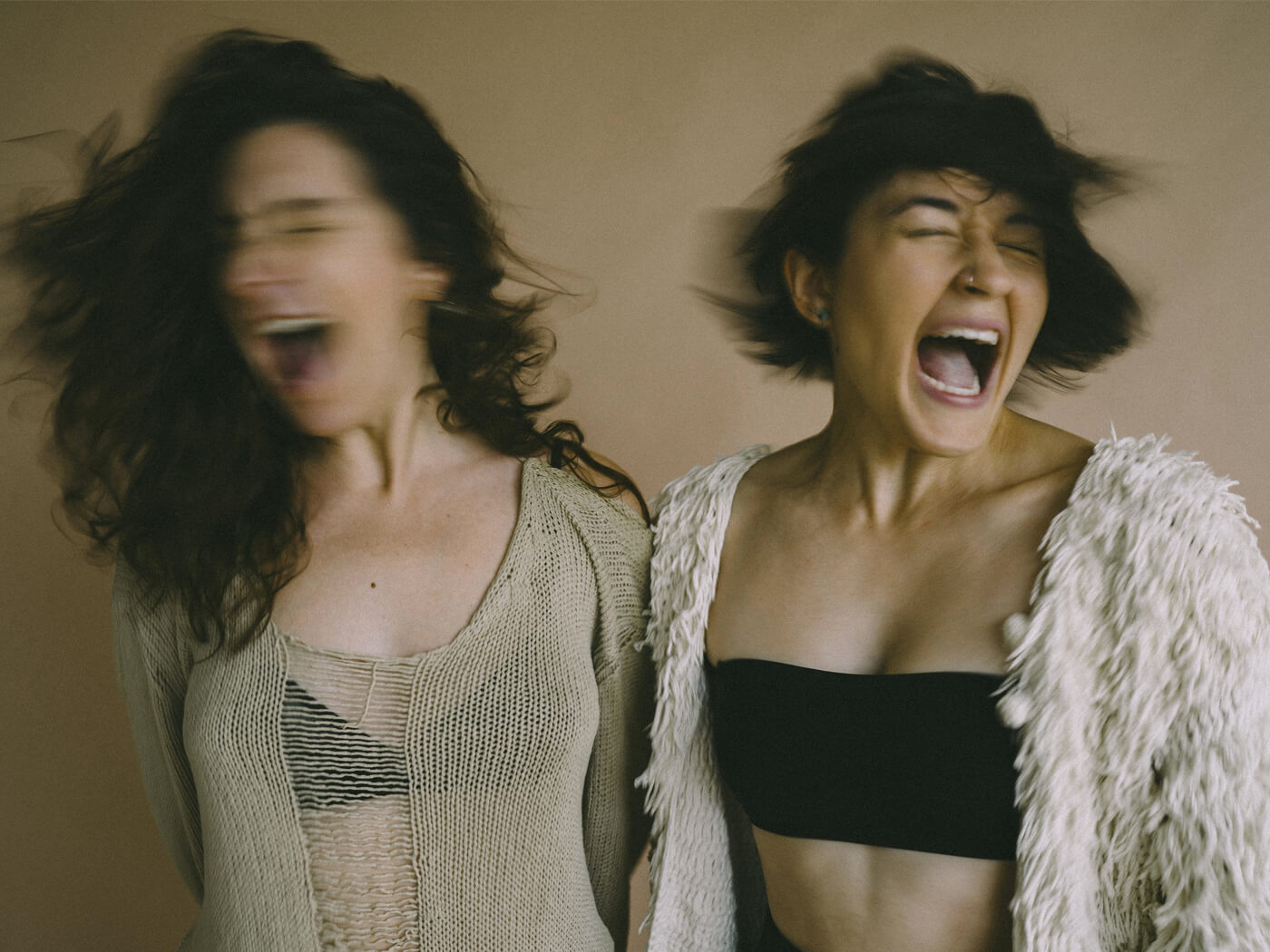 OHMME are a band that thrive on unstable territory. The Chicago duo of Sima Cunningham and Macie Stewart started the project in 2014, having been mutual admirers since high school. Both classically trained multi-instrumentalists, Cunningham and Stewart formed OHMME with one intention: using their experience and education as a springboard to create something new.

The pair are deeply embedded in the Windy City’s music scene, which has resulted in varied resumes as performers: Both contributed to Chance the Rapper’s breakout mixtape Coloring Book, and Stewart was part of the band Kids These Days with Vic Mensa, while Cunningham has sung backing vocals with Wilco’s Jeff Tweedy on tour. In OHMME, they prioritise improvisation, using their Strats to craft intertwining guitar lines one moment and unfurl washes of dissonance the next.

Their love of both noise and harmony is evident on their 2018 debut album Parts, which they recorded and produced themselves in Cunningham’s home studio with the help of drummer and OHMME’s third member Matt Carroll, as well as Tortoise bassist/guitarist Doug McCombs, cellist Tomeka Reid and multi-instrumentalist Ken Vandermark.

Cunningham and Stewart took a break from working on their sophomore album to talk to Guitar.com about the process of creating a specific sonic world and the importance of breaking the rules.

How did you come to the realisation that you were compatible as musicians?

Sima Cunningham: We both had a similar moment where we got excited about experimenting with electric guitar. We were both familiar with acoustic guitar, but we had been going to a lot of shows where we saw a more improvised way of approaching the guitar, and both of us wanted to experience diving really deep into an instrument that we weren’t as familiar with. So that’s how OHMME was born: from the desire to both sing together but also to make a lot of noise together on the guitar and see what we were capable of.

Did you notice your identities as guitarists shift as you switched from acoustic to electric?

Macie Stewart: Absolutely! When we switched to the electric guitar, we approached it more as creating a sonic space and using it for texture. I think we’ve gotten way more confident with it and we’re able to explore the full sonic breadth. There’s so many things that you can do with the electric guitar that you cannot do with the acoustic but it’s also made us more excited about using the acoustic in a recording setting, because now we know how to manipulate it to be a different sound other than just strumming.

Thanks Glen and all for a lovely tour. From @thegranada last night.

Did you discover new techniques through experimentation?

SC: I think about the guitar as a drum set and looking at it for opportunities of tonal percussive moments. Melody and harmony are hugely important, but we’re allowing ourselves to not get so caught up in trying to find beautiful melodic moments – but actually starting from the percussion and the tone of the sounds and then shaping that towards a melodic idea.

Has there been a make or a model that you have shifted towards since starting OHMME?

SC: Both of us play Stratocasters but have pretty dramatically different sounds. Macie’s is a lot on the treble and cut side, and mine has this deep thump which is helpful because we don’t have a lot of [band] members.

Do you think your classical music training has helped you to carve out your identities as guitarists?

MS: Because we have all of the training, we can rely a little more on intuition. That was the big reason why we wanted to switch to electric guitar – because we had no training on that instrument, but we have a lot of knowledge of music theory and of how sound works and of how to produce sounds that we want. So it was exciting because we had all of those logical tools, but none of the tactile tools on the guitar. It enabled us to come up with parts that we maybe would not have otherwise if we were using an instrument that we really knew deeply.

Duo tour with @glenhansard starts September 4th in Minneapolis! Do you have your tickets yet? ? ✈️ See full US & EU dates on our website | Thanks @chrifcohen for the ?

What kind of perimeters do you put in place when approaching a new project?

SC: When we’re making a record, sometimes the possibilities feel endless. For Parts, we wanted to challenge ourselves to have all of the experimenting happen within a specific sonic world.

MS: You have boundaries but you can break them slightly. I think that we really wanted to capture what it sounded like to play with the band because for the last year, we had been playing with a drummer, Matt [Carroll], and we wanted to capture how all of that worked together and improvise within that setting.

Has the process been the same for the new album you’re currently working on?

SC: No, actually this one has been kind of different. We spent about a week at a farm to record the bed of the album, and now we’re back in Chicago. This is where we add all of the layers. That can take a lot more time with experimentation – teasing out pieces and dressing the cake, if you will.

MS: We’re allowing ourselves much more room for overdubs on this record as opposed to the last record.

SC: Our first EP was the birth of the band and it was very overdub-heavy. We recorded every part piece by piece and came up with what felt like the origin of OHMME. Then with Parts, we wanted to try to bring the sound of our record and our live show together.

I think that we don’t feel married to either of those ideas because ultimately, making a record is about making a record and we’re trying not to project too far forward in the future and worry about how we’ll perform it. I think that we’re opening up the limits that we put on ourselves again. Macie’s a violin player, and so we want to experiment with strings and with different guitars interacting with each other. One of the fun things about being an improviser and being a songwriter is that you make a record, and then you transform that record in a live setting. That’s why going to the live show is exciting, because it’s not going to be the record.

Have you been exploring any new techniques?

SC: We’ve been doing a lot of wah pedal!

MS: Sima also built a contact mic at this workshop a couple of years ago, and she gave it to me just to use for my improvised gigs. We decided to bring it into the studio. We’ve been putting the contact mic on the guitar strings or on some metal surfaces and other things to get interesting percussive sounds. We’ve also been singing into the contact mic to manipulate that with delay pedal. We’re still in the exploring phase.

SC: We have a Leslie speaker and that was a big part of that song Parts. It’s such an incredible thing, it makes everything sound like it’s struggling through water.

MS: I have my Strat but I play it through two different amps. Than I have an ABY pedal and a Vox AC15 and then I use a Fender Rumble. I have a bass amp and a guitar amp and I run them simultaneously, because I have an octave pedal made by Electro-Harmonix called the Octave Multiplexer, and that enables me to kind of drop down and play basslines if we need to fill in the space in the bottom. My other favourite thing on the board is my Fuzz Factory copy that me and Sima’s partner Dorian built together. It’s a fun, really out of control fuzz pedal that doesn’t always work, but when it does, it is very exciting.

SC: I’ve got my Strat and then I play through a Magnatone amp and the Twilighter amp. It was fun to get that, and I’d been touring with that for about a year. It’s a really amazing tremolo and it’s got two different kinds of frequency. I also have a big fat fuzz pedal made by Jupiter and that’s the pedal that I use when I’m really manipulating feedback. That’s something I really love, treating feedback like a smoke ring that you’re shaping and pushing and expanding. Then I just have a drive pedal, a Moog chorus pedal and now that I have the Magnatone, I’ve been trying to pare down quite a bit and use the things that I have to the fullest reaches before I add.

What has playing in OHMME together taught you about the guitar?

SC: That the guitar is endless. It’s like a big, unmoulded pot of clay.

MS: It’s a palette of colour.