The best guitar pedals to buy in 2021: 16 best tremolo pedals

Looking for a tremolo pedal? Luckily, the pedal world is full to the brim with great effects aimed at every budget and every style. 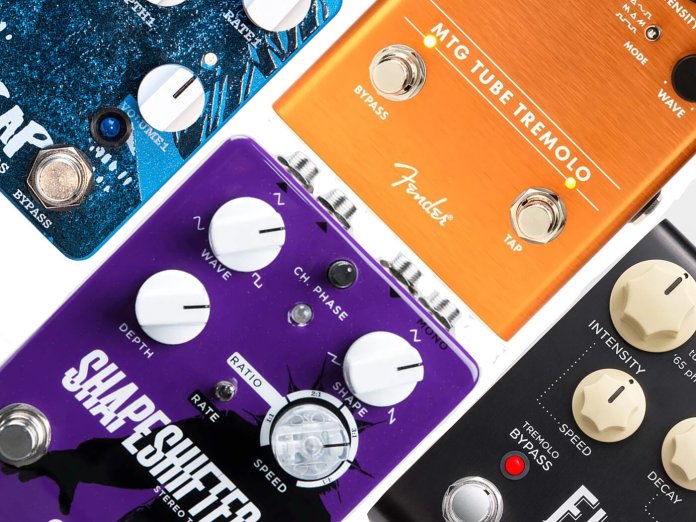 Whether you’re trying to do your best Johnny Marr impression or want stomach-churning wobble, here are the best tremolo pedals you can buy today, from budget-friendly mini pedals to vintage-inspired stalwarts.

What to look for when buying a tremolo pedal

If you’re new to tremolo pedals, there are a few terms that will come up in this list that could prove confusing. LFO will be a familiar acronym to those from the futuristic world of synthesisers, but for the benefit of us primitive guitar-strummers, it stands for Low-Frequency Oscillator. This generates a sub-audio frequency signal, according to which the volume of your guitar’s signal is modulated. Effectively, a tremolo pedals’ LFO is its beating heart.

A couple of the common controls are self-explanatory: rate is how fast the LFO oscillates, depth is how much of an effect it has on your signal’s volume. Simple enough.

A little less obvious, and a little less common, is the control for ‘waveform shape’, which determines the behaviour of the LFO across a given cycle. A triangle wave will give a constant rise and decline in volume, a sine wave will accelerate and decelerate, and a square wave will sound choppy, with instantaneous jumps in volume level. Some pedals will even offer a random wave, or the ability to blend different wave shapes.

Harmonic tremolo is another phrase that will come up a lot in this list, and it’s good to understand how it differs from regular tremolo. In a case of non harmonic tremolo, the LFO will affect the amplitude of your entire signal. In the case of harmonic tremolo, your signal is split into two different frequency components: bass goes one way, treble the other. These are then modulated differently and then summed back together for a swirling, pulsating effect.

Because of the troughs alongside the peaks, traditional amplitude tremolo can trick the ear into perceiving a much lower average volume. With harmonic tremolo, on the other hand, there’s less of a drop in perceived volume due to two signal paths working in tandem.

The best tremolo pedals to buy in 2021 at a glance

Created in collaboration with Dan and Mick of That Pedal Show, the JAM Pedals Harmonious Monk is a love letter to all things tremolo. The LFO works in two core modes: ‘+’ or ‘-’, which let you pick between full-on choppiness and subtle pulsing.

Despite the name, the pedal isn’t just a harmonic tremolo, either. A second toggle switch allows you to change between harmonic and amplitude modes. Keeping with the ‘dual’ theme, the second footswitch also lets you double the LFO’s speed.

Inside, you’ll find some trim pots for the EQ, while the face of the pedal bears a knob for output level, added to compensate for the drop in perceived volume that tremolo effects can lead to.

The Keeley Hydra isn’t just a tremolo – it’s also a three-mode reverb, a vibrato and can probably protect a golden fleece in a pinch, though that might void the warranty. There’s a pair of footswitches, one for the reverb side of things and one for the tremolo. A multi-function switch toggles between reverb types as well as between vibrato, harmonic tremolo and sine-wave amplitude tremolo.

The time-based side works with tap tempo, too, and the secondary controls don’t stop at that multi-function toggle – each knob has an extra trick up its sleeve. It’s a versatile box, especially for its size, made all the more impressive by the fact that it works with external tap or expression pedals, has stereo inputs and outputs, and offers presets to boot. Where does it keep all that circuitry?

The Walrus Audio Monument V2 is a multi-faceted tremolo from one of the US’ leading boutique builders, inspired by the otherworldly sandstone formations of Monument Valley.

+ Best of both analogue and digital
+ Entirely unique sounds on offer
– Large footprint, especially if you want to just make use of its traditional sounds

The Old Blood Noise Endeavors Whitecap is two tremolos at the same time, but not in the way that harmonic tremolo is. Its two sides are asynchronous, meaning their rate knobs don’t care at all what the other is doing.

Maybe the frayed relationship began when one side realised the other is digital, while it itself is analogue. Maybe the analogue side envied the digital side’s tap tempo functionality and wider selection of waveform shapes. Or maybe the digital side simply didn’t like the analogue side’s slightly warmer tone. We’ll never know, but it’s an interesting pairing, and offers the best of both worlds in one pedal.

You can run the two sides alongside each other in parallel mode, or in series, and each has its own volume control for blending to your taste.

Mr Black’s Mini Tremolo keeps things simple and compact. Its circuitry emulates a tube bias tremolo, with a smooth wave character and controls for intensity, speed and harmonics. That last control introduces a blend of harmonic tremolo. Having the harmonic aspect editable via a knob is an interesting choice, as it allows you to keep things subtle in that department if you so wish. On the other hand, you can crank the harmonics knob for full woozy modulation.

There are two core sides to the Origin Effects RevivalTrem. One, an old-school amp preamp drive tone, and the other, a loving homage to the sound of power tube bias tremolo. The former has controls for output, drive and tone, while the latter has toggle switches for wave shape and speed multiplier, as well as knobs for intensity and rate.

Pairing these two effects together makes this pedal a complete ‘vintage Fender in a box’ rather than just a tremolo pedal, and handily the RevivalTrem works great when plugged straight into an audio interface.

The price means it’s certainly not for beginners, but if you’re looking for a no-compromises vintage amp sound on your ’board, this might well be it.

Read our full review of the Origin Effects RevivalTrem here.

A lot of the classic tremolo sounds can be traced back to Fender amplifiers, so who better to take on a bona fide tube tremolo sound than the brand itself?

With an NOS 6205 preamp tube, you might think that the MTG Tube Tremolo would keep things simple. Far from it. There’s a plethora of wave shapes to choose from, which can be further refined by the Wave knob as well as a dedicated tap tempo footswitch and dedicated level control. There’s even a division selector knob, with options such as triplets and dotted quarter notes – perfect for syncing up with a delay. 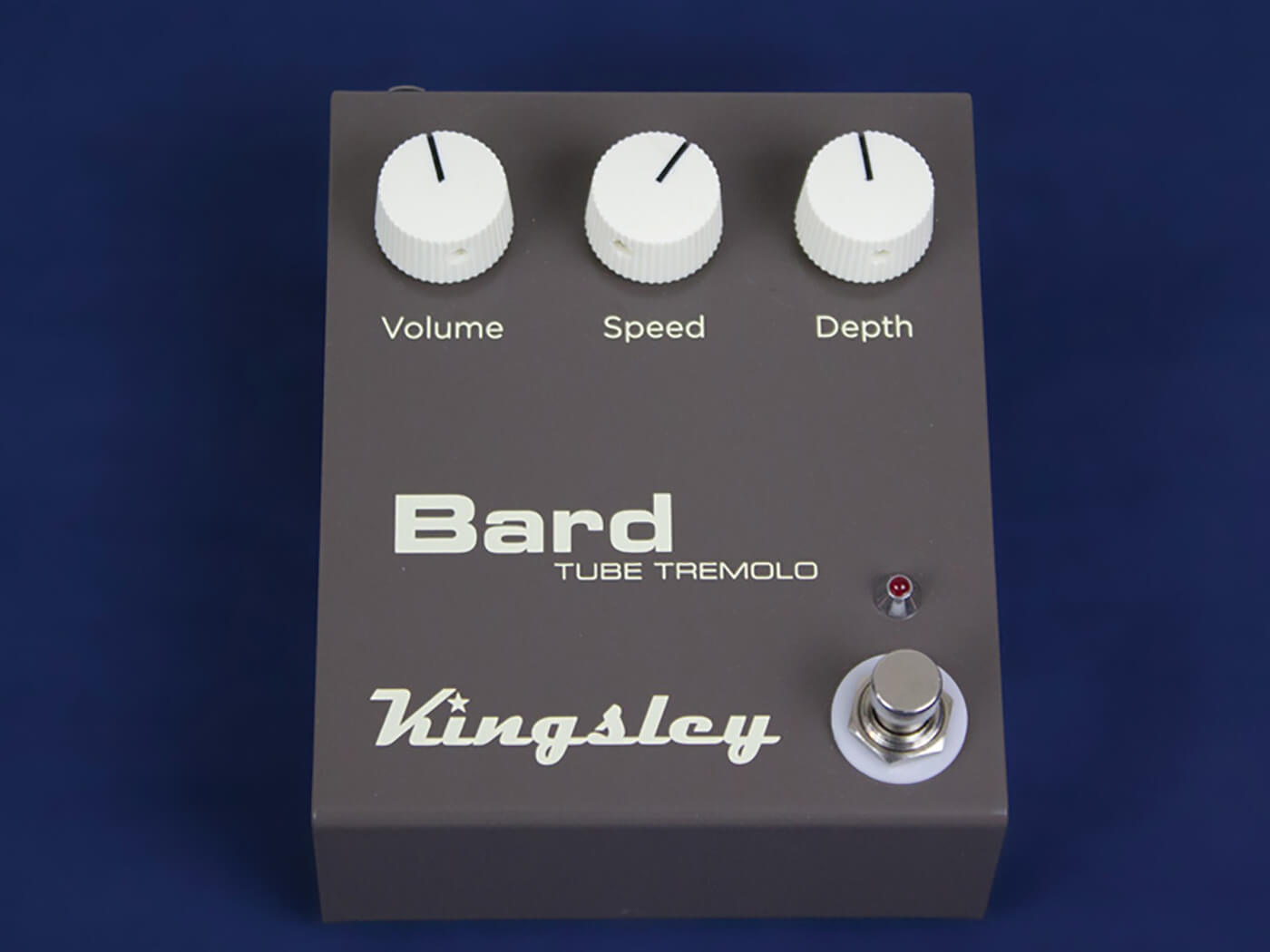 The Kingsley Bard is basically an amp tremolo in a stompbox. Running a single 12AX7 valve at 275 volts, the circuit generates a Princeton-style bias modulated tremolo effect. Controls are straightforward, with speed and depth. There’s also a volume control to compensate for perceived level drop with tremolo engaged – or used as a clean boost. 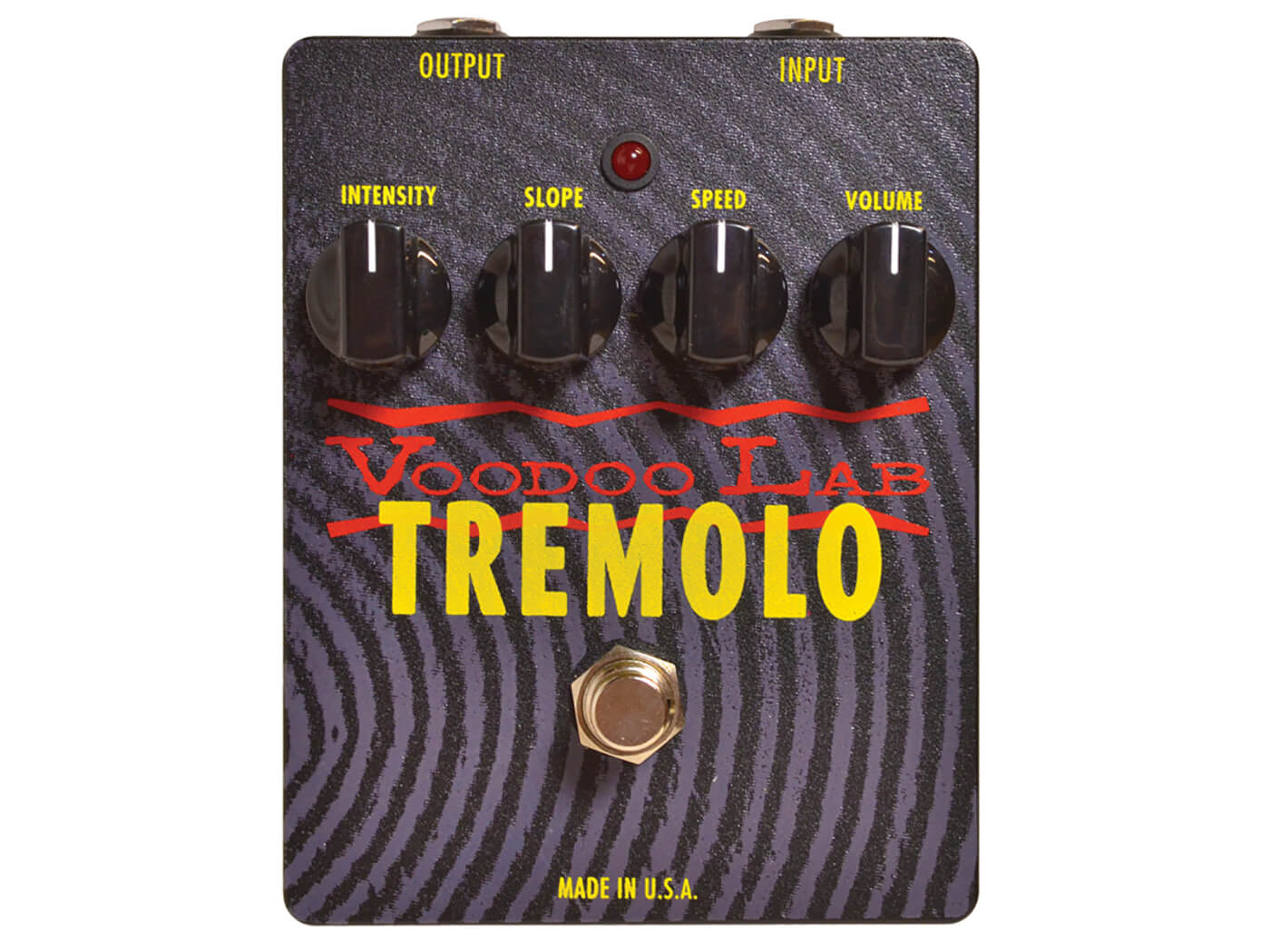 To recreate the black-panel and Silverface tremolo, Voodoo Lab used an identical lamp and photocell assembly. The slope control adjusts the feel from smooth and vintage to ‘machine-gun stutter’. Along with speed and intensity, there’s a volume control to cut or boost the output level.

With three valves and complex circuitry, the tremolo circuit used in the Brownface Fender Twin, Pro and Concert didn’t last for long, but this harmonic tremolo remains the ultimate for many. The Catalinbread Pareidolia 2 is designed specifically to replicate Fender’s ‘harmonic tremolo’, and the controls include speed, depth and volume.

One for the pathologically indecisive, because it promises to be ‘every type of tremolo’ in a box. Features include depth, rate shape, wave and phase. The Seymour Duncan Shape Shifter also has stereo inputs and outputs, plus tap tempo for easy synchronisation.

The super compact Mooer Trelicopter is revered not just for its size but also for the quality of tones available at this price point. The cheapest pedal on this list by some distance, it’s equipped with three straight-forward dials in depth, bias and an overall level. It’s on-board vintage-style tube tremolo has no discernable volume drops, and while some users have reported an LFO click as a potential disadvantage, the price once again still makes this an option worth considering.

The Stone Deaf Tremotron is unlike any tremolo pedal you’ve seen. In addition to a fully analogue signal path under the hood, it has digital controls, allowing two VCA-based tremolo controls to play at once (if you don’t attempt How Soon Is Now? with this pedal, you’re missing a trick).

It also includes nine waveshapes and switchable presets, as well as a MIDI Out, for when you want to push your onset headache into migraine territory. It’s not cheap, and you’ll need 250mA to power it, but the Tremotron is unmatched for its versatility and innovation.

Read our full review of the Stone Deaf Tremotron here.

Fish and chips, lager and crisps… tremolo and reverb. It just works. Some argue it’s all any guitar player needs in their arsenal. Strymon’s Flint provides exactly that, and then some.

Based on the classic amps coming out of the Fender factory in the early 60s, Strymon’s digital processing impressively recreates the sultry throb of three great analogue tremolos.

On the other side of the pedal, you have three reverbs: one based on a 60s spring reverb, another on a 70s plate and the final on a hall reverb from an 80s rack, the Strymon Flint leads the way in stompbox recreations of vintage-amp effects.