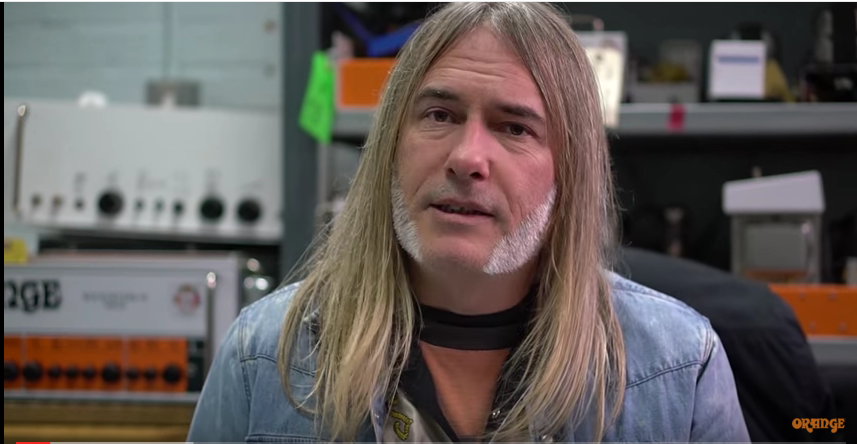 Official info below:
To mark the discontinuance of the Tiny Terror, Orange have made a documentary, which shows how the lunchbox amplifier started life, shows you the prototype, talks about the design and discusses its legacy.

The brainchild of Adrian Emsley, Orange’s Technical Director, the Tiny Terror started life drawn on an A4 piece of paper, because he did not want it to be any longer than that! The concept was for a small amp that was portable, versatile and loud. Ade shows you the prototype he hand built as he explains that initially people did not get what he was trying to achieve until they actually heard it. He says in his head he wanted it to be able to do “the first three AC/DC Albums really well and then ‘Never Mind The Bollocks’ at slightly higher cranked levels”.

The documentary also looks at the Dark Terror, like the Tiny Terror, but with higher gain, buffered effects loop and shape control, The Jim Root ♯4 Signature Amp, essentially a Rockerverb in a lunchbox, the OR15, similar to the Jim Root, but voiced differently and the 10th Anniversary or ‘Shiny Terror’. Only 110 have been made of this stainless steel, hand wired, limited edition, set to become a sought after collector’s piece.

The Tiny Terror leaves a startlingly large legacy for such a little amp. Dave Catching (Eagles of Death Metal) describes it as a “fierce and magnificent beast” and fellow band mate Jesse Hughes considers it “the standard that all shall be judged against …. an amp that has immediate, instant tone.” Jim Root (Slipknot) says “If it wasn’t for the Tiny Terror, I wouldn’t be the first guy to be endorsed by Orange – it kinda blows my mind when I think about it.” Mikey Demus (Skindred) remembers “everyone thought it was a joke … but it paved the way for so many copycats …. it proved the best things really are the simplest.” Joe Trohman (Fall Out Boy) thinks it’s “interesting how important this amp has been in a live setting.”

Tim Sult (Clutch) recalls “the Tiny Terror was probably the first Orange amp I played that could get close to the ‘70’s Orange tone without ruining everyone else’s day!” Drew Foppe (Tech Deftones / Fleetwood Mac) states “I have used it so many times, with so many bands .… everybody has recorded with it …. it’s so versatile.” Stephen Carter (Deftones) uses his Tiny Terrors “as little power amps … those things really kick ass …. Orange are the cutting edge amp company – since forever!” Chris Bishop (Crobot) believes “Orange started the whole lunchbox craze …. that’s gotta be cool.” Pedro Ferreira (Record Producer, Spin Road Studios) says “the Tiny Terror is the amp I always go to …. it has been on everything I have recorded.”

Talking about the Tiny Terror, Cliff Copper, Founder and CEO said, “I remember when we first showed the Tiny Terror at Frankfurt, people had to look twice, the reaction was great, they liked it and the price! I feel really proud of the Tiny Terror; it is a lovely little amp. I am really sorry it is the end of the line for it. But you never know what happens in the future. Fingers crossed.”