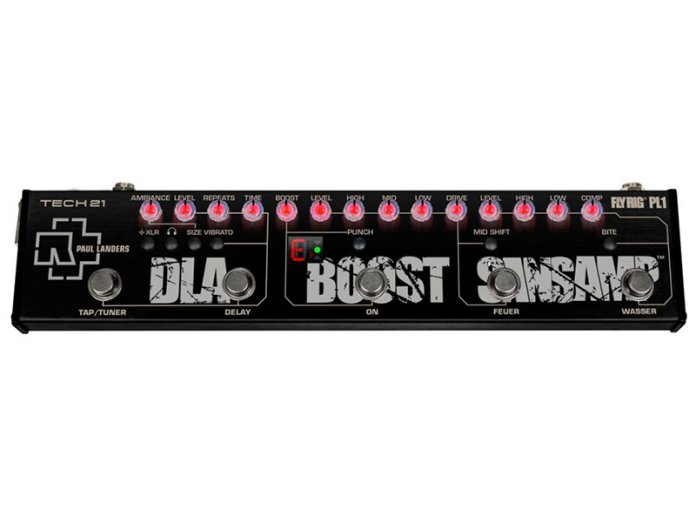 Paul Landers and Tech 21 have collaborated on a signature Fly Rig named the PL1. Inspired by the SansAmp GT2 and PSA tube amp modelers, the PL1 is a multi-effects stompbox formatted to Landers’ preferences. It features two custom SanAmps channels, delay, vibrato, ambience and boost effects.

The PL1’s layout is divided into three sections: SansAmp, DLA and Boost.

At the Fly Rig’s core is the SansAmp section that includes two all-analog channels named “Feuer” (‘fire’ in German) and “Wasser” (‘water’). The Feuer produces grittier tones, and is controlled by an active three-band EQ with a “Mid Shift” switch, as well as “Drive” and “Level” knobs.

The Wasser, on the other hand, delivers clean tones. It’s governed by a two-band EQ and “Compression” and “Level” knobs. Additionally, a “Bite” switch provides increased clarity, definition and harmonics to top end notes.

The DLA portion of the PL1 has “Delay” and “Tap/Tuner” footswitches, a “Vibrato” switch, and an “Ambience” knob. The key features are as follows:

Holding down the “Tap/Tuner” footswitch also engages a tuner that simultaneously mutes the signal path.

Finally, the PL1’s Boost section features a footswitch that, when engaged, adjusts the level of post-SansAmp signal between -10 and +6 dB. It features a “Boost” knob to manage the effect, along with a dedicated three-band EQ and a “Level” knob. The “Punch” switch in this section adds more mids to the mix.

Retails for $329. More information at tech21nyc.com.

Meet the Taylor GT, a “new category of acoustic guitar”