The guitar superstar’s first new album in five years might seem like a pastiche on the surface, but his reverence for the 80s radio rock that shaped his childhood is deadly serious, and the bedrock for Mayer’s most left-field album yet. 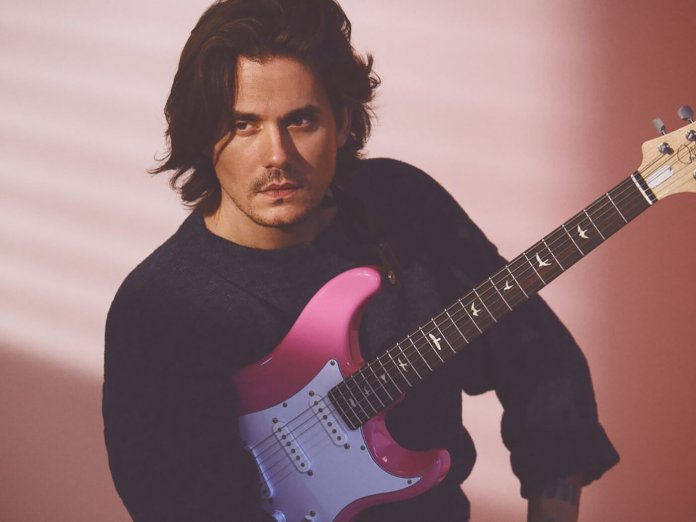 You might be forgiven for assuming that every copy of John Mayer’s new album comes packaged with a knowingly raised eyebrow from the man himself. From the cheesy music videos and billboard ads used in its promotion, to the authentically 80s discount stickers on the album’s cover, the pithily titled Sob Rock arrives on the back of a marketing campaign seemingly precision-calibrated to encourage you to not take things too seriously, and instead approach it with the sort of sardonic humour you would any other online meme.

And this is no mere promotional device, obfuscating a slickly produced selection of modern pop songs calibrated to slot into your New Music playlists with focus-grouped ease. As Mayer himself put it to Blackbird Spyplane instead he wanted to “pretend someone made a record in 1988 and shelved it”.

And that’s exactly what Sob Rock is – a full-blooded tribute to an often-derided era of guitar music, ably assisted by a cast of musicians who remember it first-hand: from regular bassist Pino Paladino, to co-producer Don Was and particularly keyboardist Greg Phillinganes, who channels the spirit of his days working with Clapton, Michael Jackson, Stevie Wonder and yes, Kenny Loggins with aplomb. Perhaps, as a self-professed student of comedy, Mayer just appreciates the value of committing to a bit?

Opening track and lead single Last Train Home is perhaps the best illustration of this archival spirit – its reverbed drums, punchy synth stabs and deliciously chunky lead lines taking us back to an era when the shoulder pads were towering and the suit sleeves rolled up. To further emphasise the point, the video for the track shows Mayer using a suitably 80s ‘Roxy pink’ version of his Silver Sky, an all-white Martin and the Soldano stacks that backed up Clapton’s Armani era – all that’s missing is a splash of Old Spice to really set the mood.

From there, it’s strange that this confident statement of intent takes a stylistic left-turn on Shouldn’t Matter But It Does – a country-tinged ballad that, while enjoyable enough, feels like it would have been more at home on 2013’s Paradise Valley. It’s hard not to consider if it’s an attempt to hook fans of his usual fare in early doors, but if you’re strapped in and ready for an all-expenses-paid trip to 1988, it’s a jarring change of step.

This sense that you’ve heard this stuff before isn’t helped by the fact that in several cases you have – in addition to Last Train Home three of the album’s 10 tracks have all been released as standalone singles since 2017’s The Search For Everything. It’s a mixed blessing for the album as a whole. For example, late-night drive bopper New Light is a highlight, but part of that might well come from the enjoyment of revisiting a song first released back in 2018. I Guess I Just Feel Like is another recycled track, this time from 2019, and its plaintive bluesy balladry again feels somewhat out of place here, although the theatrical Gilmour-ish solo gives suitable stadium-rock pomp to the closing passages.

Elsewhere, we imagine the 80s music video fans were blowing at full tilt in the studio on the day Shot In The Dark was recorded, as his dramatically soaring slides and searing bends, punctuate another gentle ballad – this one with killer accompaniment from country chart-topper Maren Morris – while Til The Right One Comes combines the bluesy doublestops that Mayer made his own on debut Room For Squares with gently parping keys and Hammond that feels like a lost soft-rock road trip classic.

Another standout is Wild Blue – a gently grooving slice of Dire Straits-worshipping pop, replete with wonderful Knopfler-esque soloing, which serves to remind us that Mayer’s ability to channel the greats in an authentic and compelling way isn’t limited to Messrs Vaughan, Clapton and Guy.

Closer All I Want Is To Be With You is a heartfelt ode to lost love, punctuated by some wonderfully dextrous counter-melody and a fist in the air solo that brings the album to a suitably melodramatic and theatrical conclusion.

And if you’re waiting for the punchline to all those promotional nudges and winks, well… therein lies the anachronism at the heart of John Mayer. His online persona might be replete with meta-humour and an almost painful level of self-awareness, but his music remains steadfastly earnest and serious. With the exception of low point Why You No Love Me – a song so lyrically cringeworthy it’s hard to imagine anyone taking it seriously – Sob Rock is played without a hint of the irony you might expect from a tribute to this much-maligned period in popular music.

And in that regard, maybe the joke is on all of us. “Just let people enjoy things” is a common refrain in the face of social media’s tendency to sneer at pretty much anything. John Mayer might understand why the likes of Dire Straits, Toto, Hall & Oates, Foreigner and Michael McDonald are ripe for mockery, but Sob Rock is clear proof that his affection for that time in music is unironic, even if it’s not conventionally ‘cool’. And if you share some of that unashamed affection for the period, you’ll be happy to join him on this road trip to a bygone age.

Sob Rock is out now on Columbia Records.