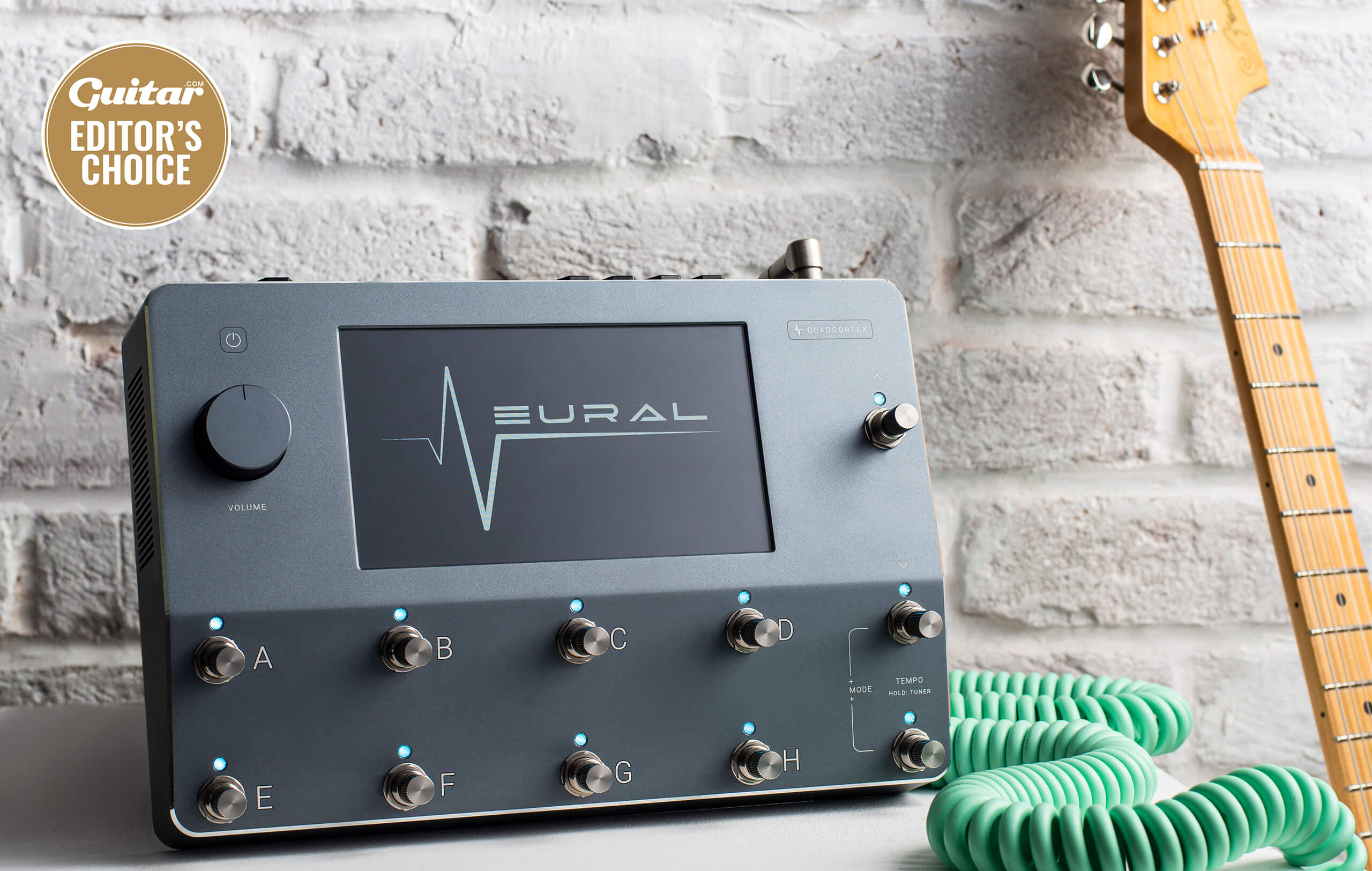 Neural DSP Quad Cortex review: is this the game-changing guitar product of the decade so far?

Meet the groundbreaking digital modeller that could make your amplifier, your pedalboard and even your audio interface redundant. If the competition aren’t scared, they really should be.

A leap forward in terms of both usability and sonics, the Quad Cortex is the shape of modelling technology to come.

Almost 10 years ago, I sat in a recording studio with a couple of colleagues fairly convinced that we were the victims of an elaborate hoax. We’d just unboxed the first Kemper Profiler to arrive in the UK and immediately used it to make a profile of a Marshall JTM45. When we AB’d our profile with the mic’d amplifier through studio monitors, the results were simply astounding. This had to be a hidden camera show or some sort of witchcraft, right?

As we said at the tail end of 2019 in Guitar.com’s roundup of the greatest gear of the decade, “Not only did the Kemper Profiler’s release represent the moment that digital amp modelling truly came of age, it turned the process on its head and democratised it, allowing the end-user to create their own amp models.”

Game-changer it may have been at the time but, fast-forward to 2021, and the Kemper Profiler isn’t quite the cutting-edge product it used to be. Though there are now several form factors, the user experience is somewhat old-school and eccentric. Kemper’s technology can still produce phenomenal-sounding results and it remains at the heart of pro touring rigs all over the world but, put simply, it’s showing its age – especially in comparison to the workflows of competitor products such as the Line 6 Helix and Fractal Audio Axe-Fx III.

But what if a new modelling unit came along with the processing power to outgun Kemper, Helix and Axe-Fx? What if it had higher-definition amp modelling capabilities, mod cons such as wifi connectivity and an intuitive touchscreen interface? What if all that tech could be packed into an elegant floor and desktop-friendly unit smaller than a 16-inch MacBook Pro? Enter Neural DSP and the Quad Cortex.

Hailing from Helsinki and headed up by Darkglass founder and chairman Douglas Castro, Neural DSP made its bones in the plugin world and the firm has collaborated with the likes of Cory Wong, Plini, Gojira and Tosin Abasi on virtual amplifier and effects modelling suites. The Quad Cortex marks Neural’s first foray into dedicated guitar hardware and the spec sheet alone makes for exciting reading.

Claimed by Neural to be the most powerful floor modeller on the planet, Quad Cortex boasts 2GHz of dedicated digital signal processing power from four SHARC+ processors and ships with more than 50 guitar and bass amps, 70 effects and 1,000 impulse responses onboard. At the time of writing, the first few firmware updates (which, along with Cloud backups, can be carried out over wifi) have already provided additional cabinets and many more virtual devices are on the way. Registering for a Neural account unlocks the Impulse Response Library, where you can transfer third-party impulse responses to your Quad Cortex and manage the IRs associated with your account. There’s also a fast-growing community of thousands of QC users with whom you can share presets and Captures via the Cortex Mobile app for iOS and Android.

Ah yes, Captures. The Kemper’s unique selling point was, of course, its proprietary profiling technology. Neural’s Capture process works on broadly similar principles, blasting a mildly terrifying sequence of white noise, synth-like bloops and alien mind-control noises through your amplifier, cabinet or overdrive pedal for a couple of minutes while it ‘learns’ and then replicates the sonic signature of your gear. The resulting Capture can then be saved, inserted anywhere into your virtual signal chain and, if you want to, shared with the wider world via the QC app.

Neural says its biomimetic AI technology is unlike any other, thanks to a “sophisticated neural network algorithm” which “perceives sound akin to human perception, making it the most natural-sounding capture solution on the planet.” We’ll address the veracity of those claims shortly but first, let’s check out the smart anodised aluminium unibody enclosure in which all this impressive tech is housed.

At just 290 x 190 x 50mm, the Quad Cortex has a smaller footprint than most pedalboards and is compact enough to fit inside the main pocket of a Mono M80 gigbag, making it ideal for travelling musicians. Weighing in around 1.9kg, it’s substantial enough not to skid around the stage when used as a standalone unit and, though we’ve seen forum rumblings about the spacing of the footswitches on the angled section of the enclosure, no significant problems were encountered during testing – even when piloted by a clumsy guitar journalist in size 11 boots. 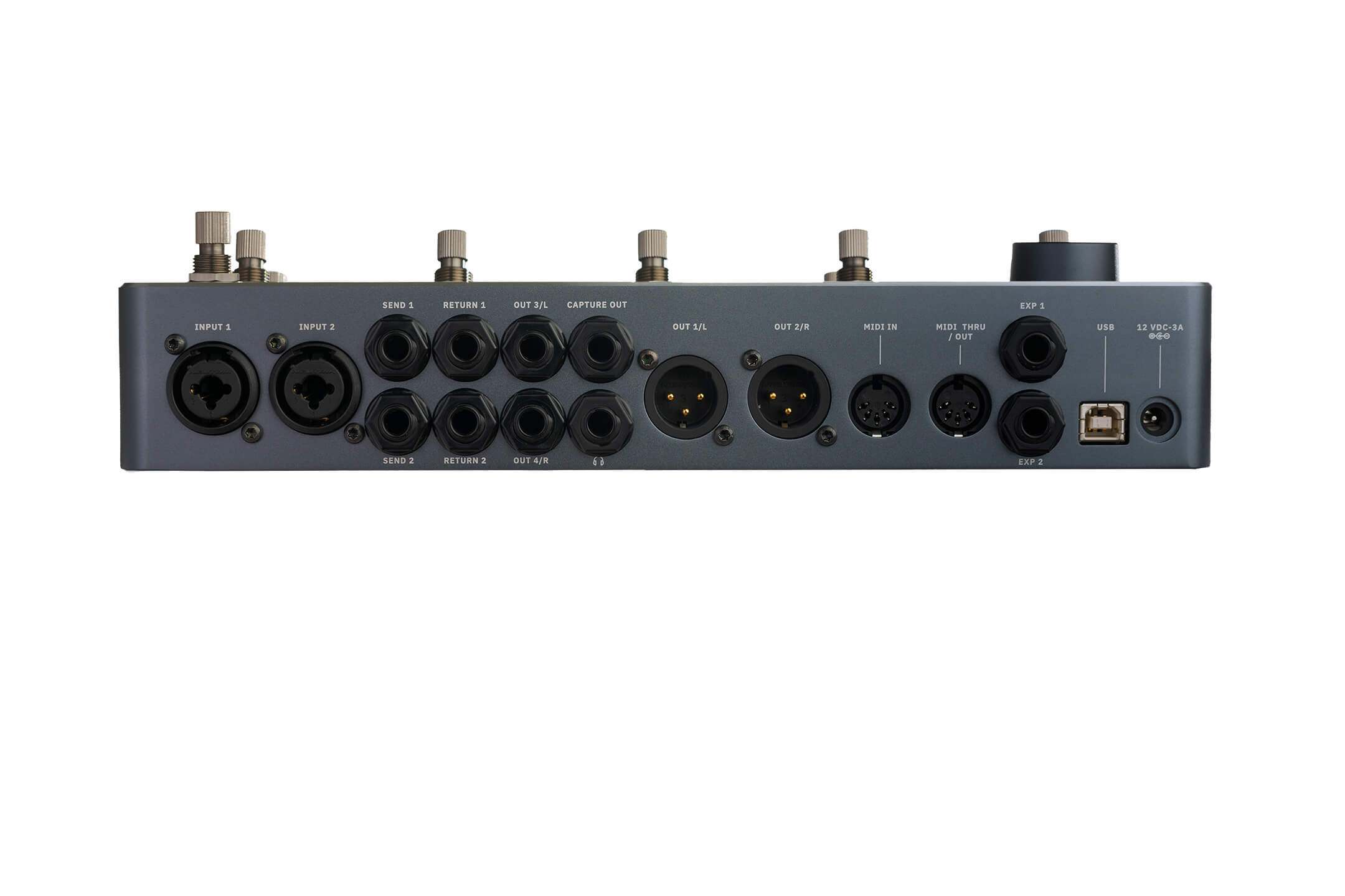 Access to the lion’s share of functionality comes via the Quad Cortex’s seven-inch multi-touch display, with its proximity to those aforementioned boots hopefully mitigated by 1.8mm chemically strengthened protective glass manufactured by stateside specialists Corning. The 11 stainless-steel footswitches are proprietary units that combine stomp functionality with rotary actuators, allowing you to twist them to control onscreen parameters as you would a regular potentiometer. Neural seems confident that these innovative footswitches are virtually unbreakable and the company even built a robot that has pressed the footswitches over 100,000 times and counting without incident. Aside from the reassuringly plush-feeling volume control, as far as hardware controls go, that’s about it.

Physical connectivity is comprehensive and kept out of harm’s way around the back. Though some users of existing high-end modellers will lament the absence of S/PDIF (according to a forum post by Castro it was one of the compromises that had to be made to allow for such a small footprint), there’s just about everything else you could possibly need for integration into a modern live or studio setup – and it’s all adjustable and assignable at any time with a downward swipe on the touchscreen. 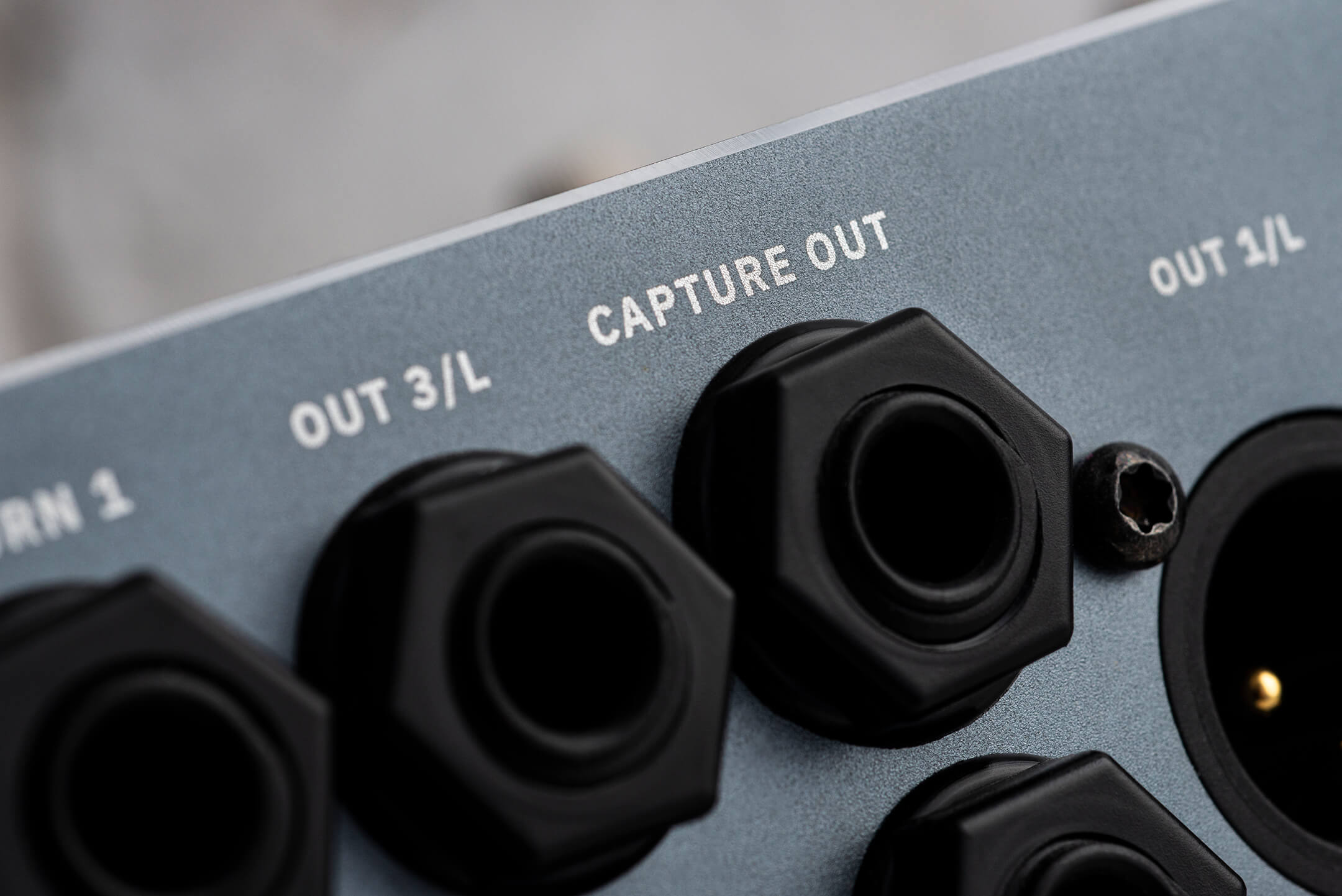 Dual combo inputs support jack, TRS and XLR connections and come with built-in microphone preamps and phantom power supplies. It’s a serious boon, and if you decide to use the Quad Cortex’s ultra-low latency USB audio capabilities, the QC may be all the audio interface you need. In addition to that, there are dual effects loops (these double up as additional inputs/outputs allowing you to connect four instruments or have more complex output routing), two jack and two XLR outputs, a headphone output, a dedicated output for use during the Capture process, MIDI in and out/thru, and inputs for two expression pedals. The supplied 12-volt PSU is a little flimsy and an IEC socket would have been a more robust option, but again it’s likely that it would have compromised the footprint of the device.

In terms of signal chains, routing and connectivity, the Quad Cortex is capable of being as simple or as complex as you want it to be. And yet, whether you are connecting to wifi, dragging and dropping effects in a signal chain, auditioning virtual microphone models or creating your own Captures, the user experience remains logical and easy to get to grips with. Though the touchscreen isn’t iPhone responsive, it’s still impressive and navigating the onboard software soon becomes second nature.

For performance purposes you have a choice of configuring the QC footswitches in one of three modes. In Stomp mode, you can assign any element (block) of the signal chain in your virtual rig to its own switch, so it’s much like using the Neural unit as you would a traditional pedalboard. In Scene mode, each footswitch controls the settings of any number of blocks within a rig, giving you eight snapshots of one preset, while Preset mode offers instant access to banks of eight virtual rigs via switches A-H. Stomp mode is the easiest mode in which to get your bearings, and once you’ve added a block to the signal path, tapping on the icon opens a window in which its parameters can be adjusted via either the touchscreen or corresponding illuminated footswitch. Hit the disk icon in the top-right corner to save your progress to the existing location, or expand the adjacent dropdown menu to save it in one of 2,560 user preset slots. That should be enough for most people. 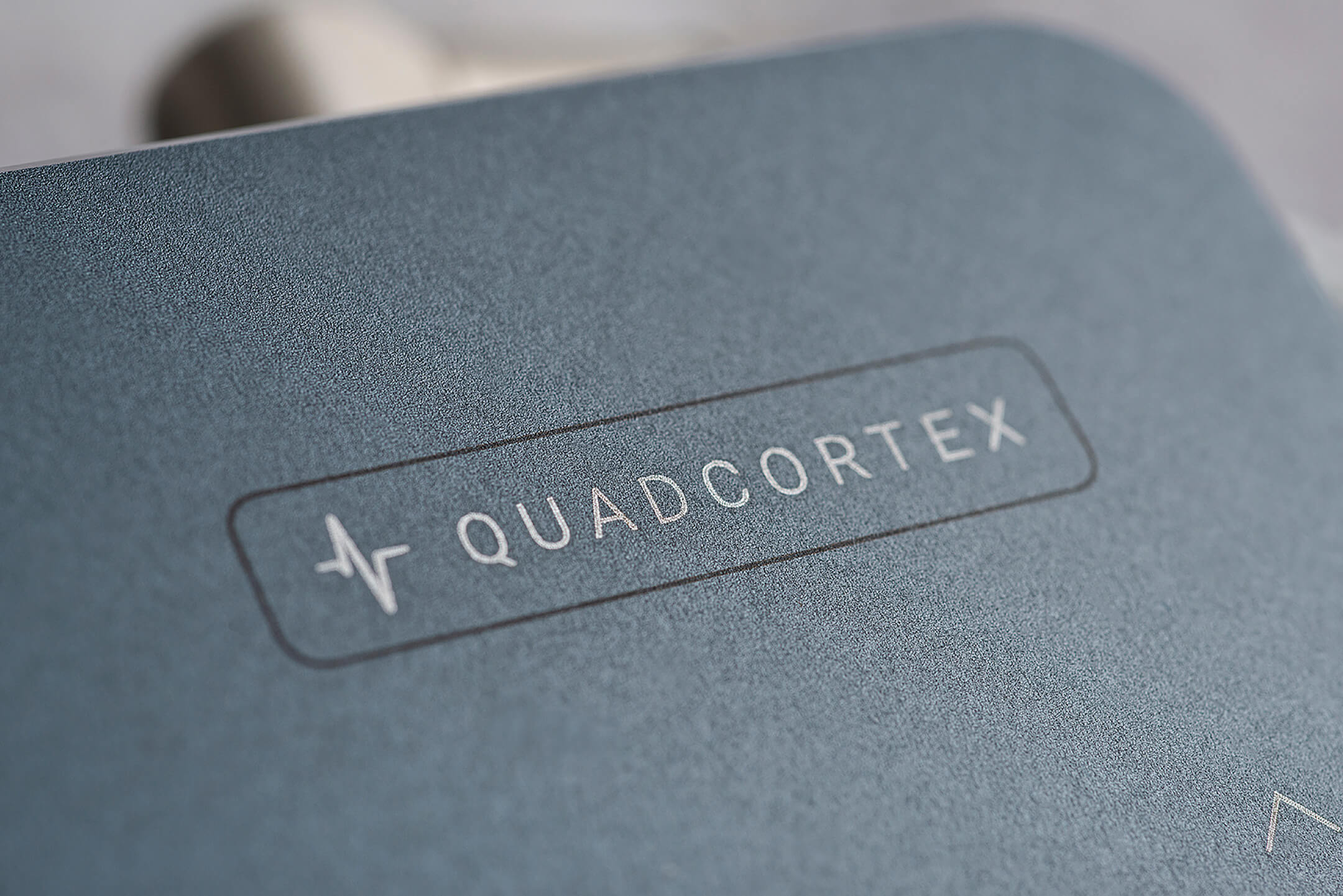 For all the appeal of this headache-free interface, the most exciting thing about Quad Cortex might just be its nuanced sonic performance. All of the leading modellers are capable of professional-quality guitar tones that are good enough to headline major festivals or play on hit records. However, after over a year in lockdown using both the Kemper and Universal Audio Ox for direct recording, the virtual amplifiers that the Quad Cortex ships with and our DIY Captures immediately feel more organic under the fingers, less fatiguing on the ears and simply more HD overall.

From an audio-engineering standpoint, when compared to Kemper profiles of the same amplifier with an otherwise identical signal chain, Quad Cortex Captures are more lifelike and information-rich, blending seamlessly and beautifully with third-party plugins and responding to equalisation more like an analogue audio source. Trusted engineer and guitarist friends who have spent time with Quad Cortex seem to agree, with the general consensus that Neural has both raised the bar sonically and created a platform with a more appealing user experience than its competitors.

Quad Cortex is not perfect yet; all the major food groups are accounted for and their quality is very good, but the onboard effects selection initially feels a little thin. Also, the amp menu is biased towards higher-gain tones but that’s perhaps to be expected given the nature of Neural’s existing plugin user base, not to mention that guitarists in heavier genres tend to be early adopters of digital modelling tech. All that said, new amps and effects are being added on an ongoing basis and even a player whose amplifier tastes are rooted firmly at the vintage end of the spectrum can find much to love about Neural’s addictively touch-sensitive and harmonically rich AC30 and Deluxe Reverb models.

Indeed, the combination of convenience, the sheer quality of the tones and the fact that you can add Captures of your own personal amps and drive pedals to the signal chain makes the idea of gigging direct with the Quad Cortex a very attractive one indeed. It’s already proved to be invaluable in the studio, and once venues with decent PA systems reopen their doors, taking the Quad Cortex on the road is a no-brainer. 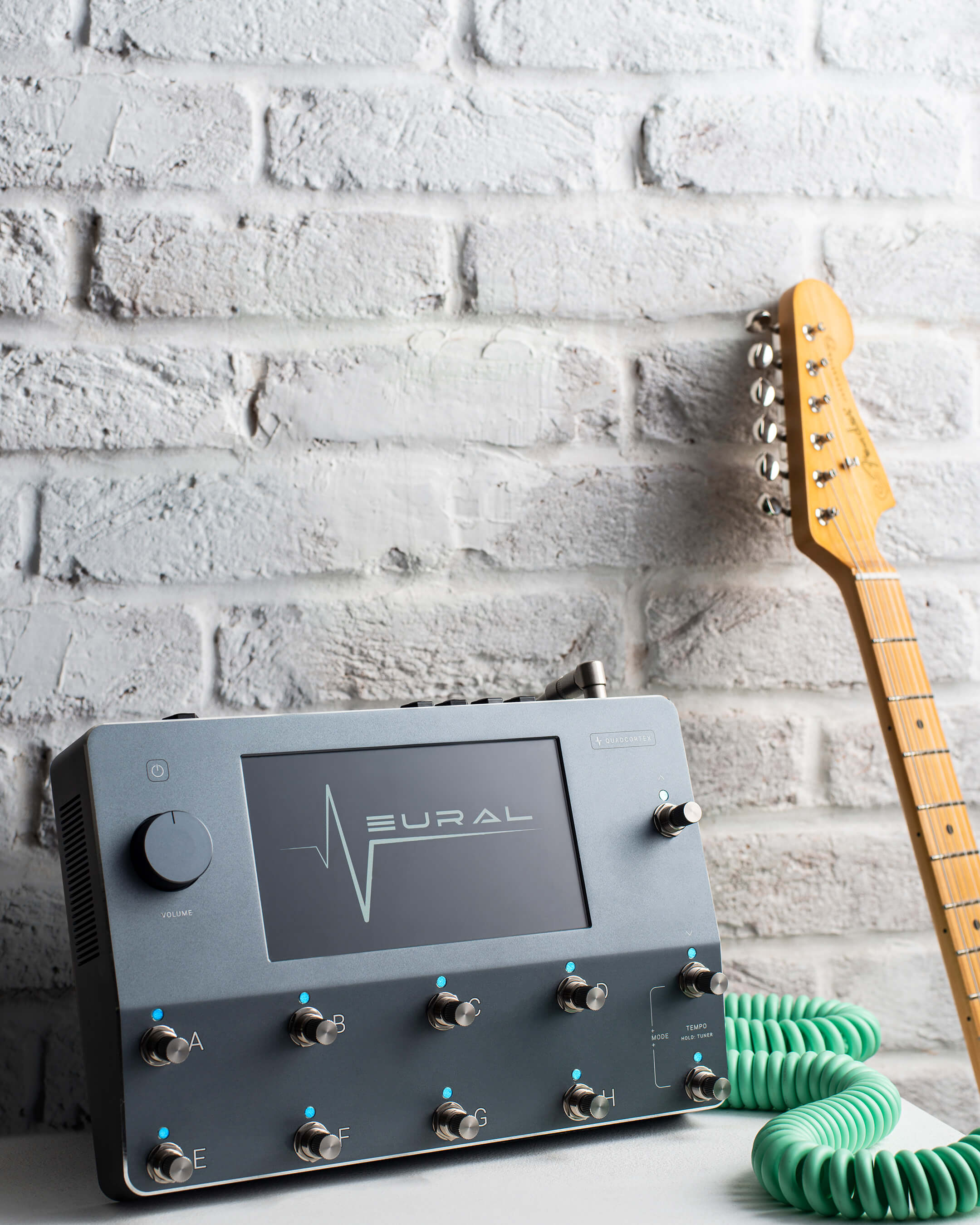