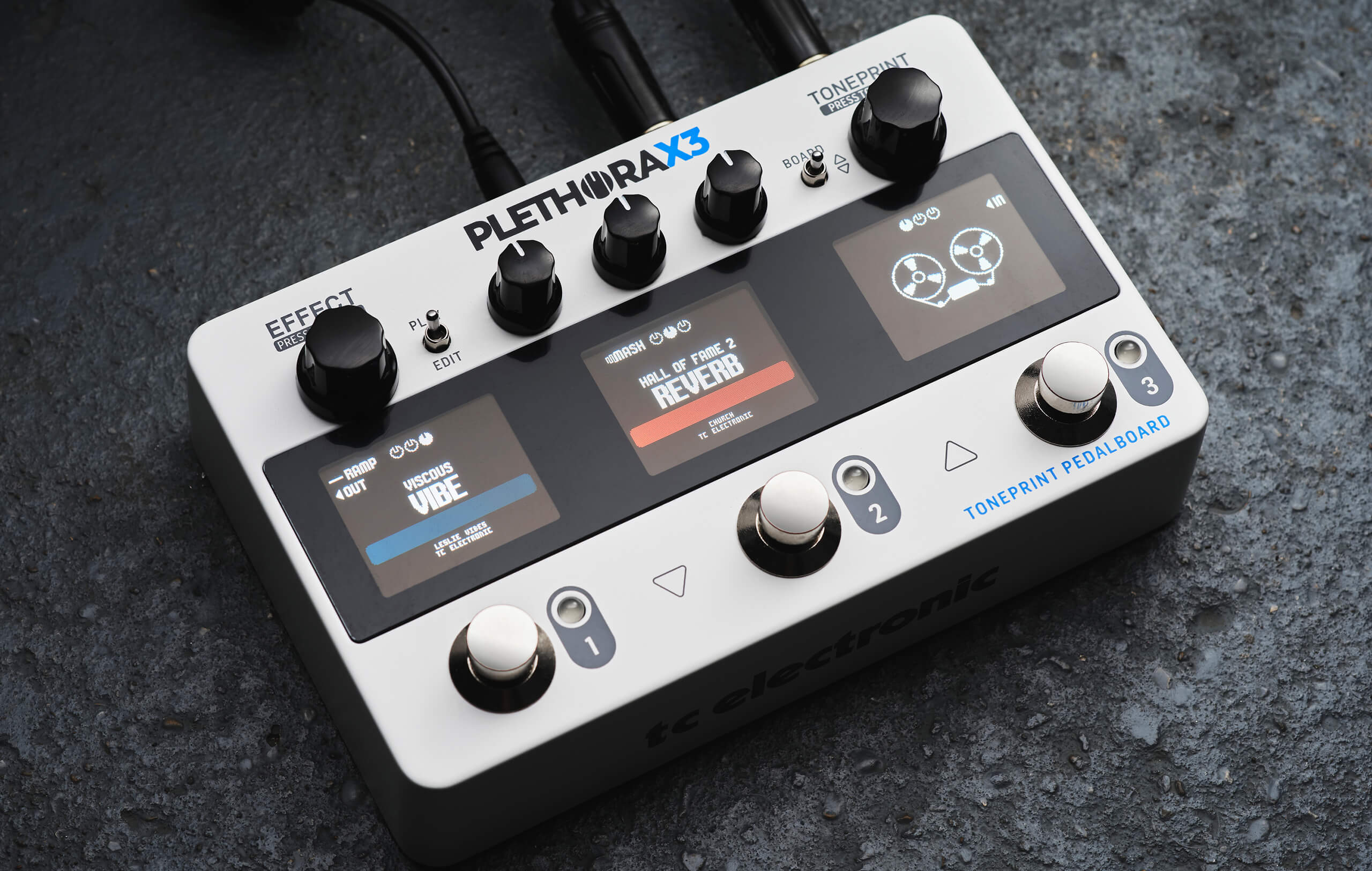 TC has squeezed its Plethora X5 pedalboard into a smaller, cheaper unit with access to the same TonePrint sound library, and it makes all kinds of sense.

Struggling to manage your pedal collection as it spreads out across the floor like an oil slick, but not quite ready to ditch the whole lot for an all-in-one multi-effects processor? TC Electronic might just have the solution – and it’s as affordable as it is compact and cuddly.
The Plethora X3 aims to combine the immediacy and simplicity of individual stompboxes with the power and versatility of a one-box digital pedalboard. And its secret weapon is TC’s app-based TonePrint technology.

Let’s get this out of the way straight off: the X3 is not a complete and comprehensive multi-effects unit along the lines of the Boss GX-100 or Neural DSP Quad Cortex. It only covers time-based effects (plus a compressor and a gate) and the idea is that it replaces some of your existing board, not the whole thing. In that sense it actually looks like a more practical option than the much bigger – and pricier – Plethora X5.

The hardware we’re dealing with here is a smart-looking white box about the same size as three standard pedals playing sardines. Each of these three modules has its own bypass footswitch, and a colour display above it for navigation. At its most simple, the X3 allows you to load up any three of 16 possible effects and use them just as you would if they were in separate enclosures. And actually, given its sub-£300 price, that wouldn’t be a bad little offering in itself. 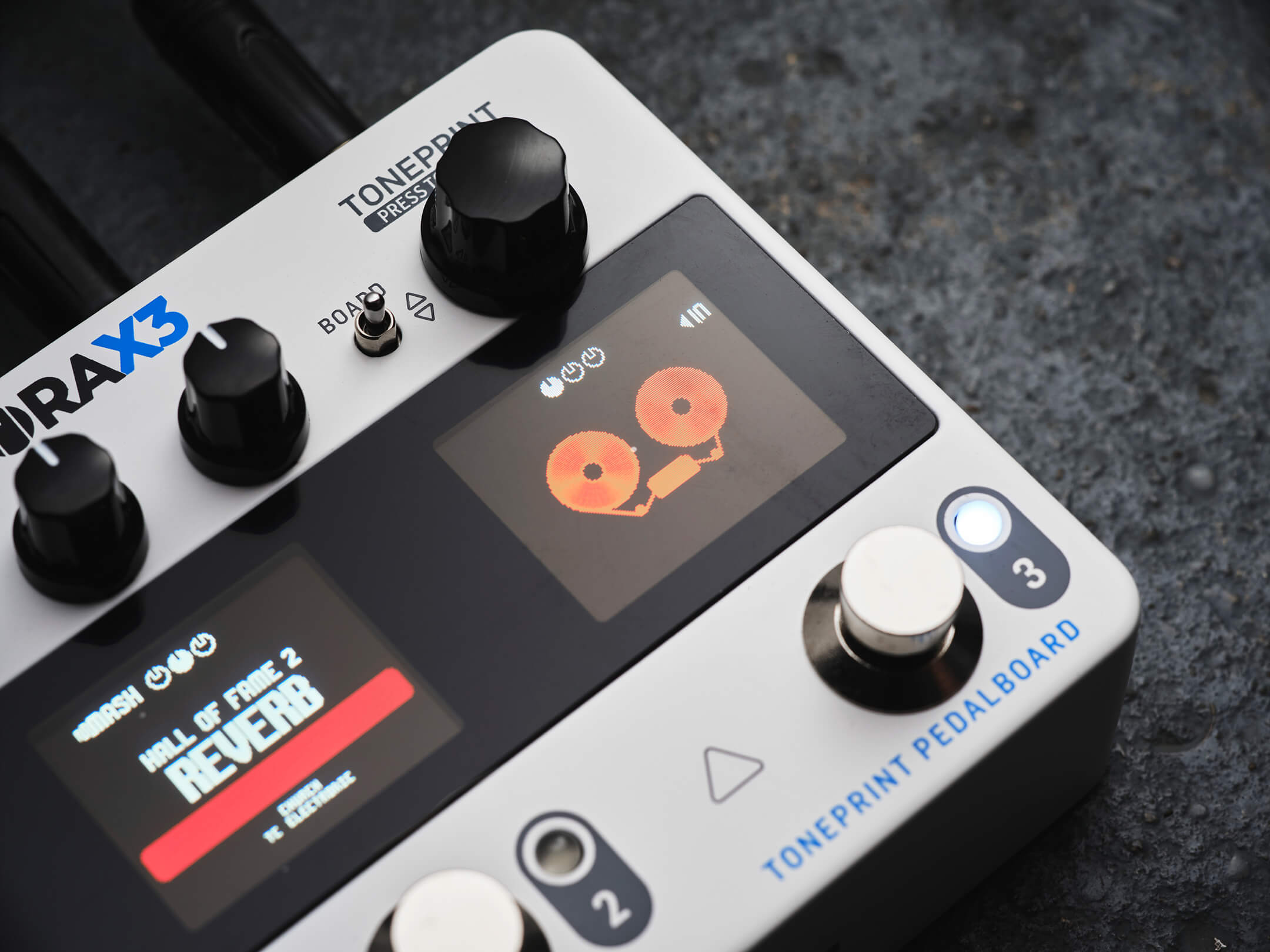 But there’s also a slightly less simple side to this device – most notably in the ability to store over 100 virtual boards, each one with your choice of pedals and your custom settings, then scroll through them on the fly.

Then there’s the freedom to edit those settings in more detail – beyond the three control knobs on the front of the unit – using either the TonePrint smartphone app (over Bluetooth) or the PC/Mac equivalent (over USB). Add to that a built-in tuner, plus the inclusion of TC’s clever Mash expression functionality in all three footswitches, and the X3 begins to look like more than the sum of its elegant parts. 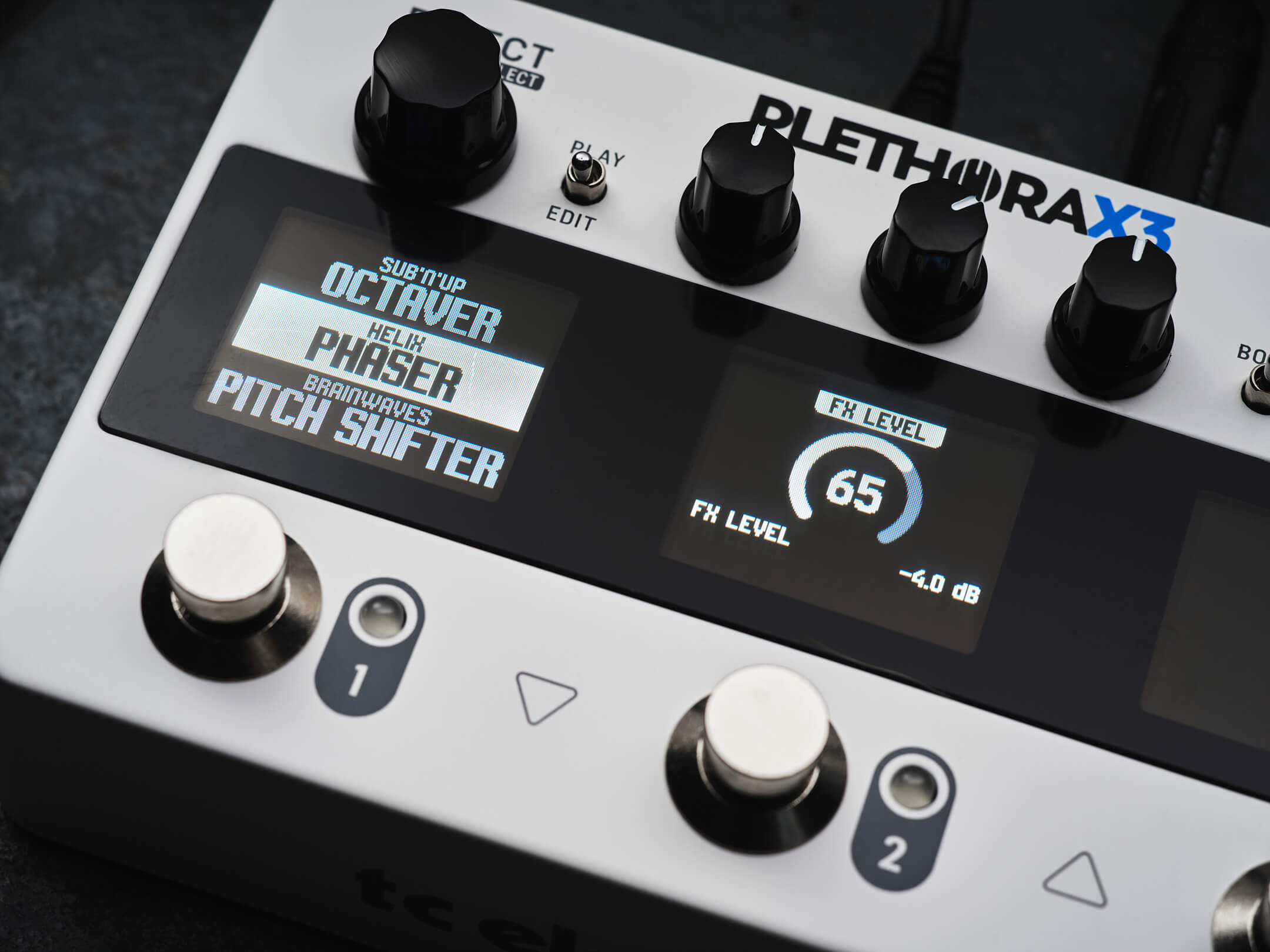 Before we get stomping, a word on TonePrint – which has now been around for 12 years and is therefore officially no longer ‘newfangled’. Bluetooth has been a godsend for this clever tech, which previously required you to hold your phone next to a guitar’s pickup and ‘beam’ new sounds in via coded audio.

There are now a dizzying number of TonePrints available in the app, many of them designed by big names ranging from Andy Summers and Brian May to Guthrie Govan and Steve Vai. Loading them into a suitable pedal (such as this one) takes no time at all, and there are also blank templates that you can fill with your own sonic experiments. As long as your phone is paired, you can tweak your tones on screen and audition them in real time. Even the most hardened digi-phobe has to admit that’s cool. 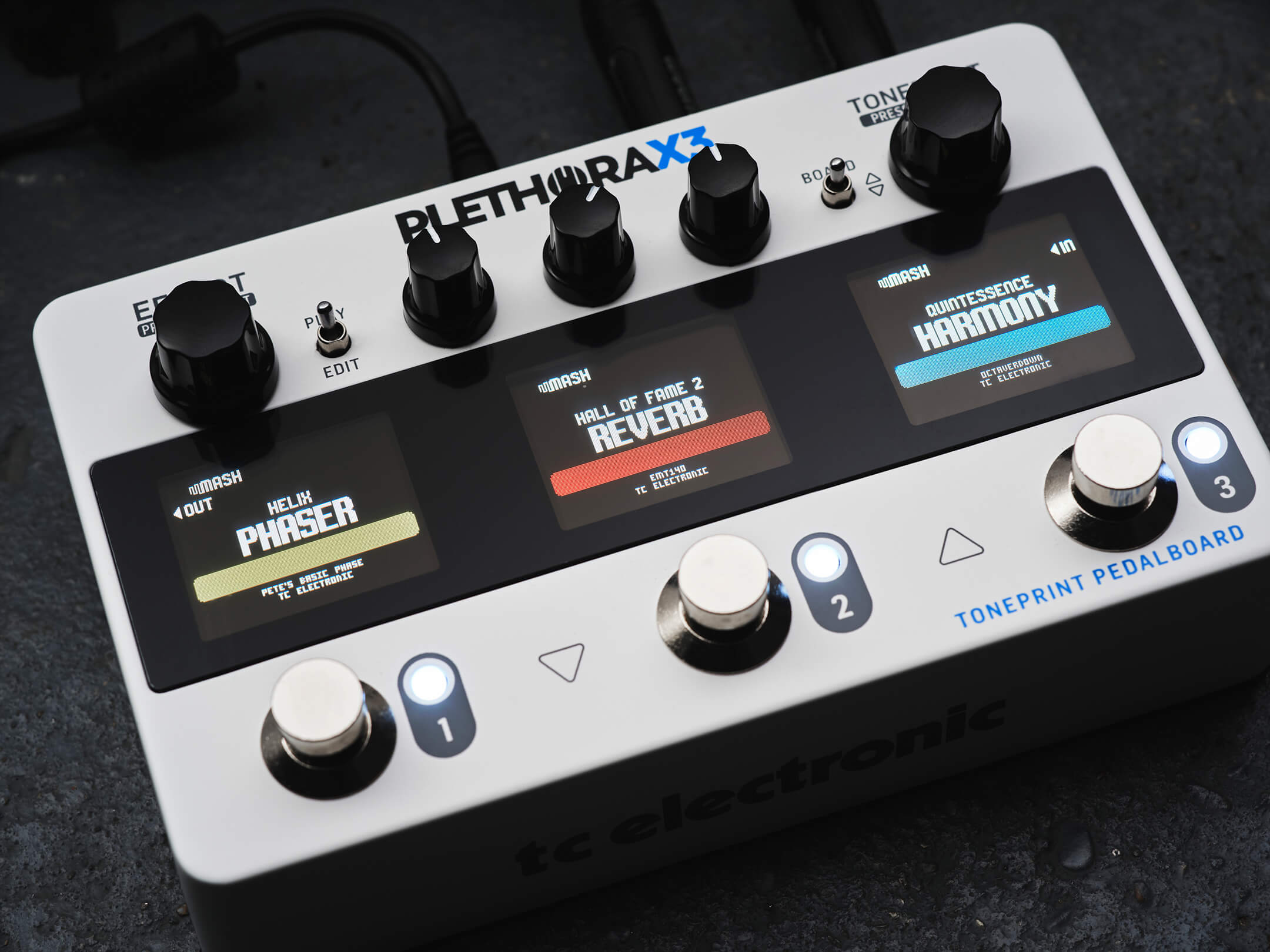 Our Plethora X3 arrives from the factory with 28 boards pre-installed, so we’ll begin by trying these out – in both mono and stereo. As you’d expect, they cover a huge amount of ground: No1 has vibrato, reverb and a looper; No2 combines three different Flashback delays; No3 packs a compressor, a ‘vintage echo’ (from the Alter Ego delay) and a tap tremolo. After that we start getting into wild phasers, doomy sub-octaves, woozy pitch-shifters and more.

This is a very nice place to lose half an hour in exploratory noodling, and the audio quality of all the effects is impeccable. We’re especially enamoured of the stereo delays and reverbs, which can be combined to create wondrously immersive soundscapes that still leave plenty of room for dynamics. The ‘Bubbles’ board (No17) is basically Mogwai in a box… just remember it’s up to your other pedals to supply the distortion.

We won’t go into detail on each individual sound the X3 can make, simply because there are too many – and you might well be familiar with a few of them already, judging by the enduring popularity of the Flashback delay and Hall Of Fame reverb ranges, not to mention TC’s smart modulation devices. The key thing is they’re all here, and with dozens of TonePrints already on board before you even get to the hundreds you can load up from the app. 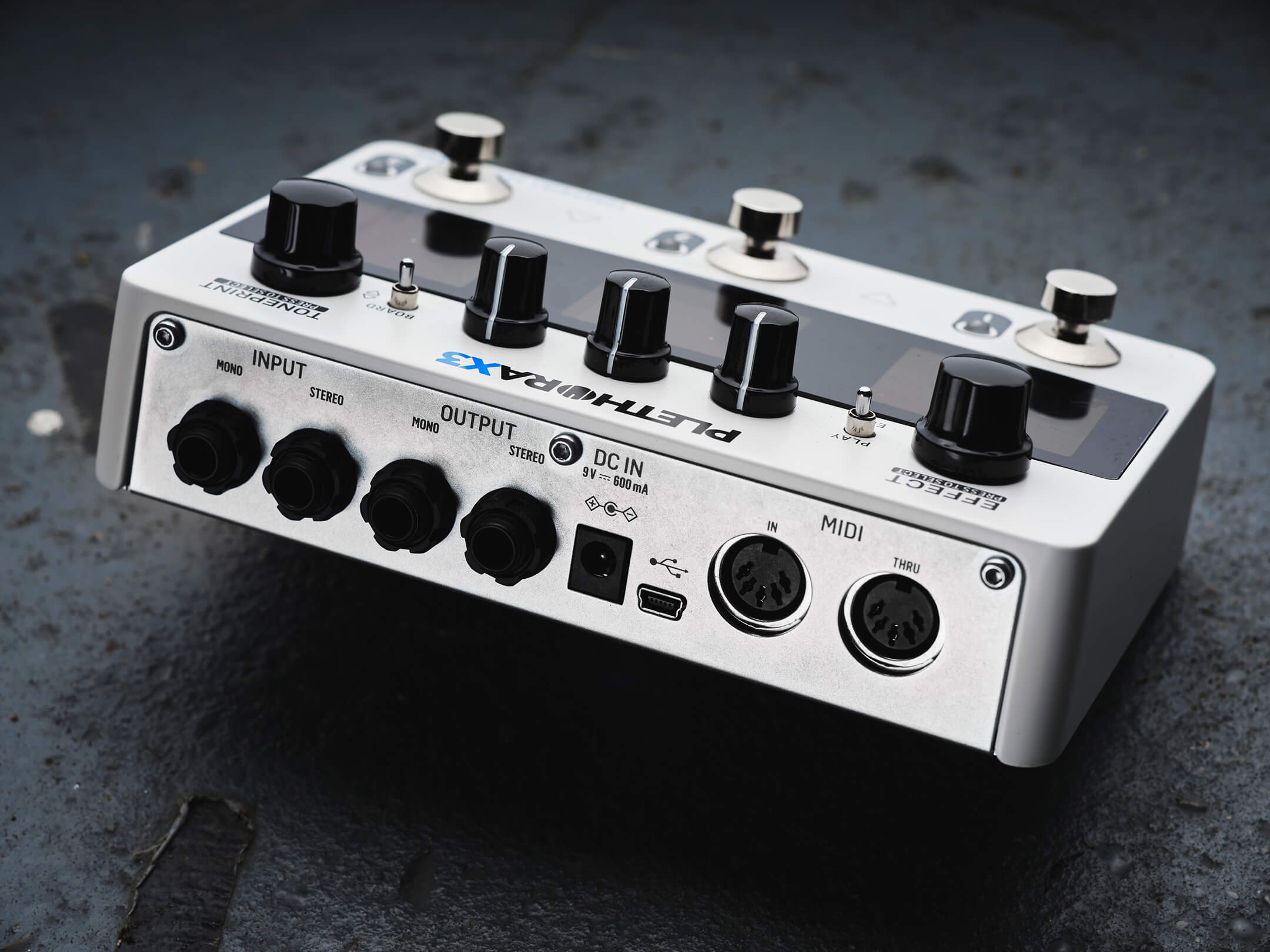 The Mash function essentially turns each footswitch into a mini expression pedal, responding to how hard you squeeze down to change the setting (or multiple settings) of your choice. Not everyone loves this tech, and we’ve never used it long enough to vouch for its reliability, but it does work supremely well for momentary bursts of super-fast chorus or self-oscillating delay.

Two more useful features worth mentioning are the ability to scroll up and down through boards by stomping on two footswitches, rather than having to bend down and flip the toggle; and the delightfully-named ‘hot knobz’, which is way less fun than it sounds: it just means you can custom-assign the three central controls for instant access without having to go into a menu first. Oh, and there are speaker cab sims for use with your separate preamp of choice, which could be handy for amp-free gigs if you don’t mind all the X3’s other effects being post-preamp. 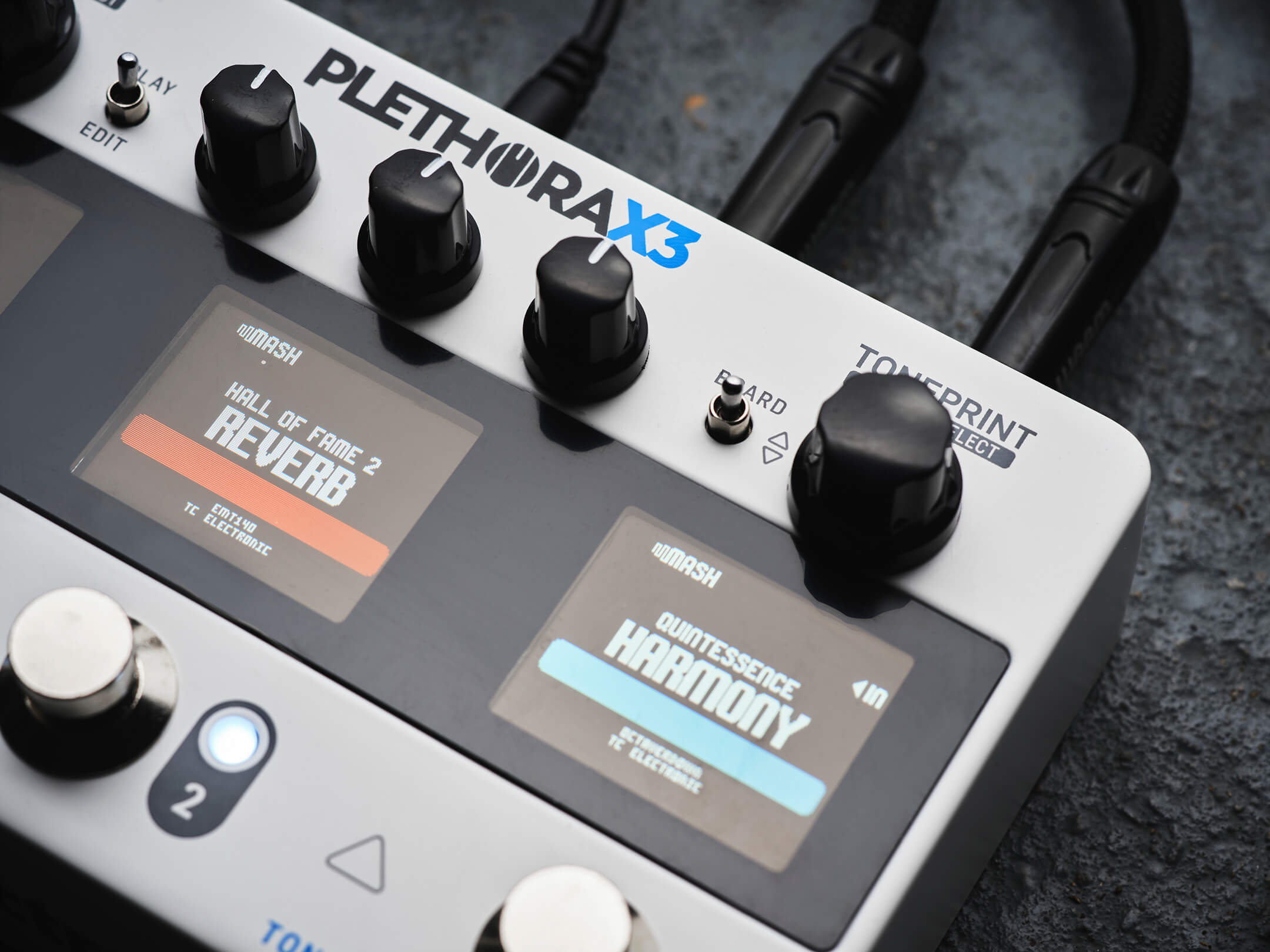 Now, here’s a list of stuff about the X3 that we don’t like so much. It lacks the effects loop of the X5; there’s no input for a ‘proper’ expression pedal; there’s a momentary silence when switching boards, so you won’t want to do this mid-song; the looper doesn’t save your loops when you switch boards or turn the unit off; Bluetooth pairing is a faff; the tuner only does one string at a time, which is a shame seeing as this is the company behind the game-changing PolyTune; TC’s versions of classic effects such as the Deluxe Memory Man aren’t the most accurate, and the Leslie simulator is weak; and you can give your boards custom names but can’t tell which one you’re currently using at a glance because there’s no master display.

That’s quite a long list, isn’t it? But we’ve given this unit a solid 8/10 rating anyway. Why? Because most of those flaws are fairly trivial, and they’re easily outweighed by all the good stuff we’ve already mentioned.

Above all, the sounds are mostly excellent and the concept behind the Plethora X3 – a bold compromise that brings obvious advantages at a newly affordable price point – has a whiff of genius. 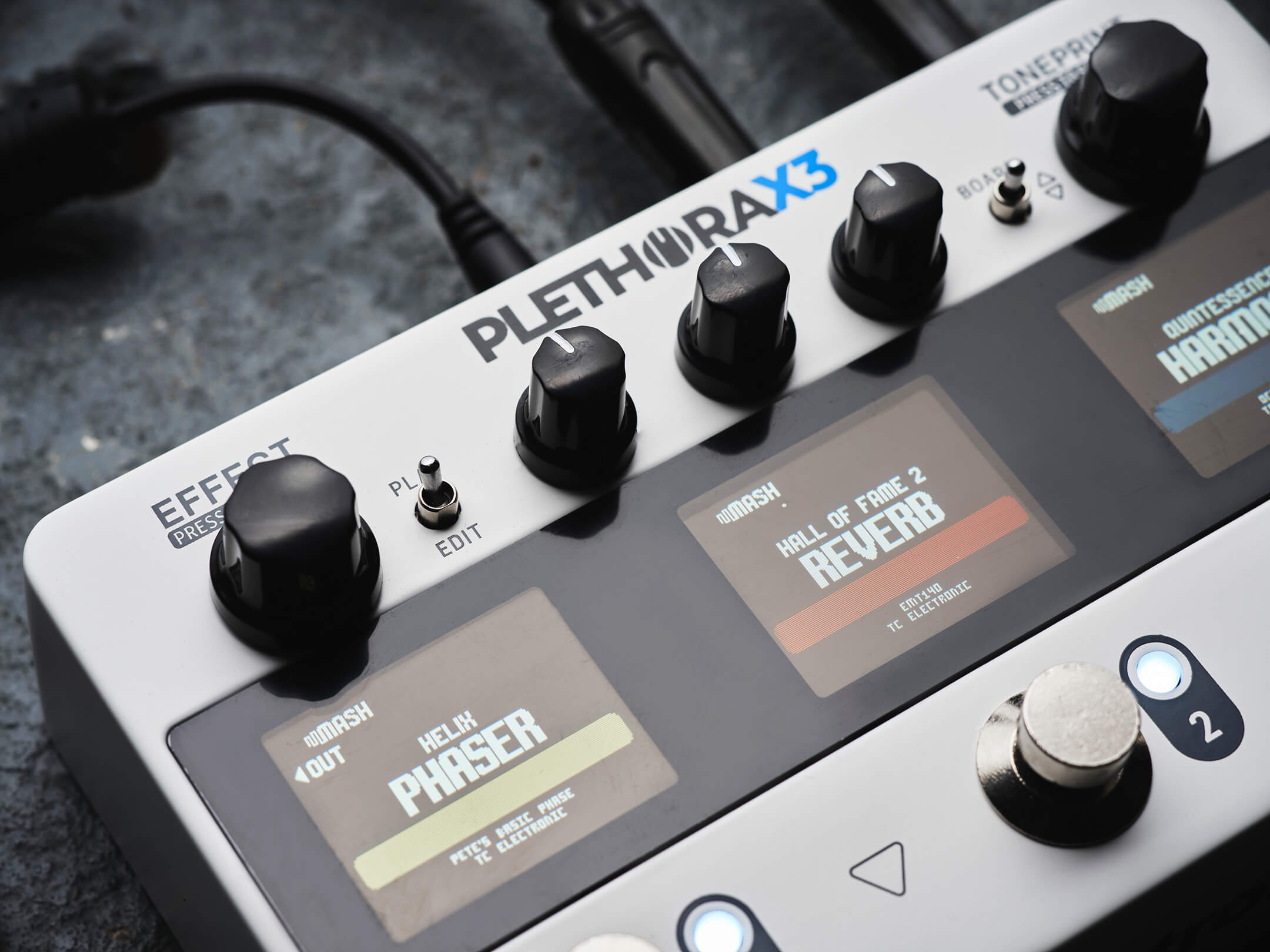