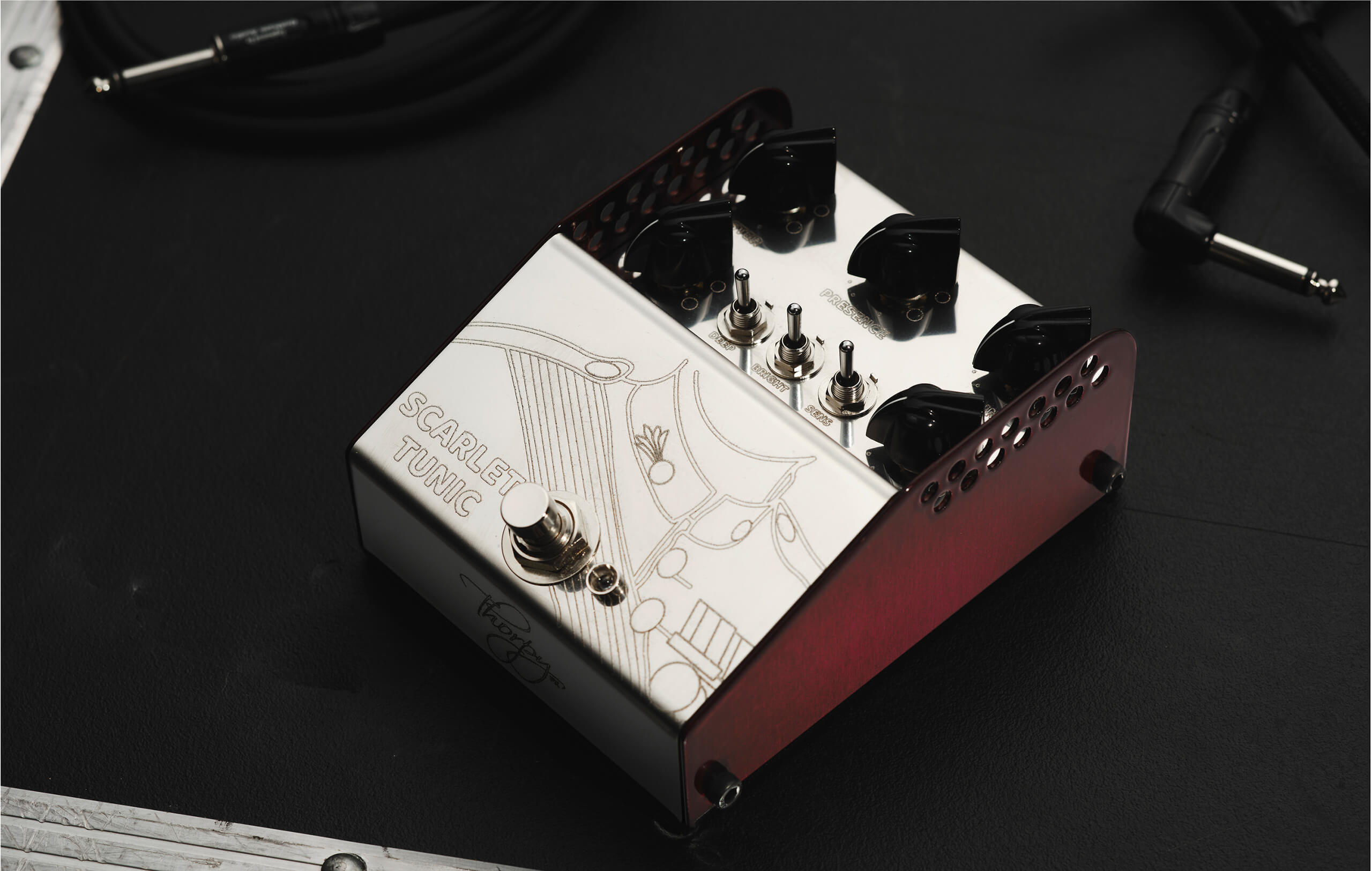 This tone-shaping preamp promises assorted flavours of interstellar overdrive… but does the world really need a Selmer in a box?

They say the Selmer company still makes a mean saxophone. These days you don’t hear so much about the long-defunct amplifier brand that started out as a London-based offshoot of that French firm, but there was a time when it seemed destined to be the sound of the British rock boom.

What went wrong? Well, the biggie was that the Beatles, the Shadows and the Animals all jumped ship to Vox; but one player who was still using his Selmer towards the end of the 60s was Pink Floyd’s original frontman, Syd Barrett… and that brings us to the ThorpyFX Scarlet Tunic.

You may be wondering why ThorpyFX, one of the UK’s most respected indie pedal builders, decided to create an ‘analogue emulator’ of Syd’s Selmer Treble ’N’ Bass 50 head. It actually started out as a favour for Lee Harris, the guitarist in Nick Mason’s Saucerful Of Secrets – basically a tribute act to Barrett-era Floyd, except with the real band’s drummer.

For Harris, the appeal of having a TNB50 in a box is obvious: it enables him to recreate those early Floyd tones without having to take a rare, heavy and potentially unreliable 50-Watt head on tour. For the rest of us, it’s not so clear – after all, the amp in question is in the same ballpark as an EL34-driven Marshall JTM45 and there are already plenty of pedals that do that job.

Maybe this is a chance for us to re-evaluate Selmer’s place in amplifier history. There’s no doubting the TNB50 is a killer amp, especially in its mid-60s ‘croc-skin’ iteration, and there has been talk of a Selmer revival in recent years (Alex Turner of the Arctic Monkeys is a big fan of the Zodiac Twin 30 combo).

That said, this is not purely a one-amp emulator. Adrian Thorpe is keen to point out that it can also cover the sounds of the Vox AC30 and Hiwatt DR103 – the latter being, perhaps not entirely coincidentally, strongly associated with the man who replaced Barrett in Pink Floyd, David Gilmour.

So while the Scarlet Tunic doesn’t have the separate treble and bass channels of the original Selmer amp, it does have a presence control for adjusting the upper-midrange response. You also get – alongside output volume, gain, bass and treble knobs – a trio of three-way toggle switches. These let you play with the character of the bass and treble, and set the input sensitivity.

As ever with Thorpy, it’s a forbidding chunk of heavy metal with the controls protected by perforated side-walls painted in a feature colour. In this case that’s red, naturally, but it’s actually more crimson than scarlet. We’re pretty sure Syd wouldn’t mind. 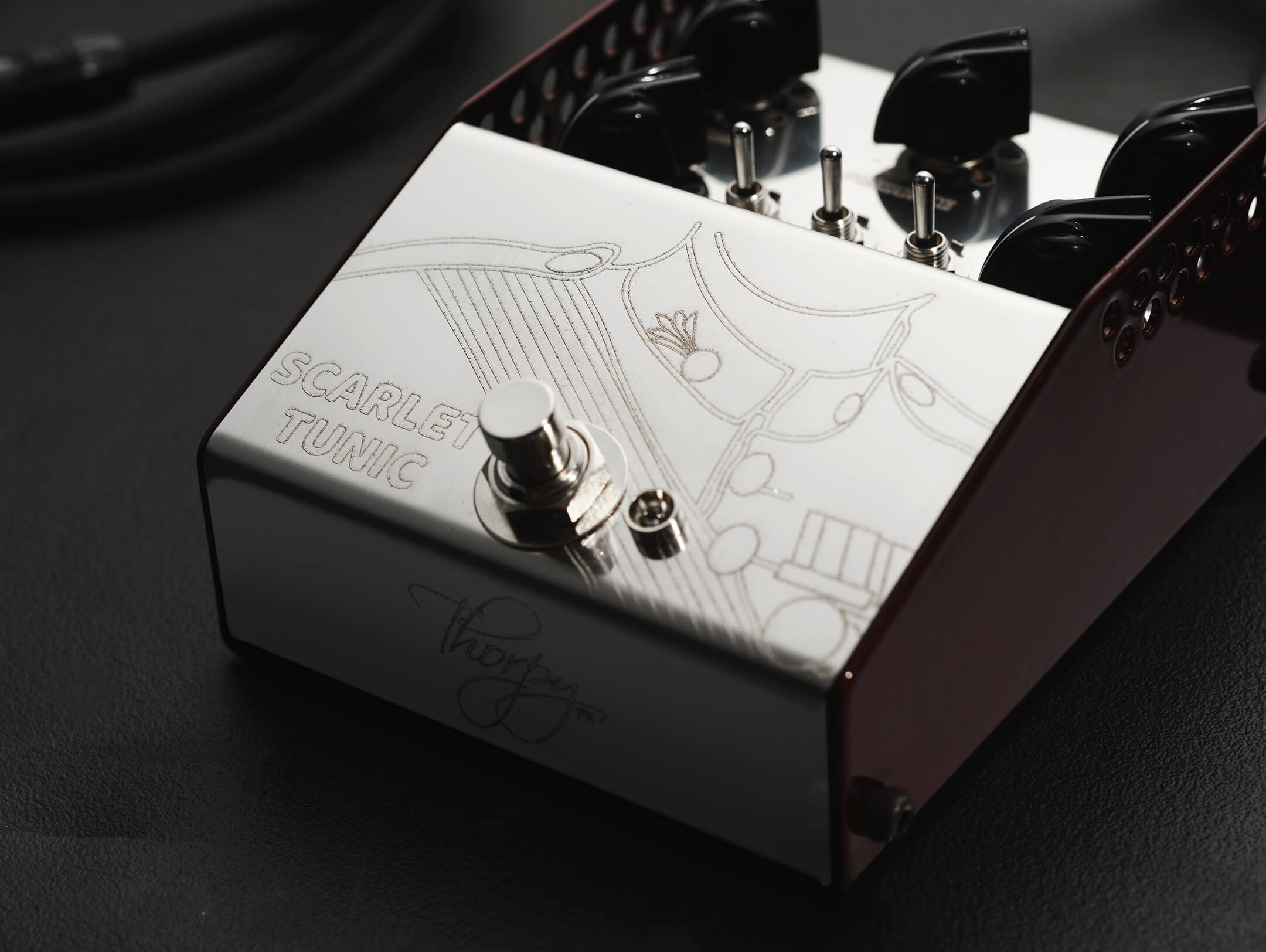 One thing you just have to get used to with ThorpyFX pedals is that the controls are not easy to read. Everything is etched into polished steel, and if the light’s falling at the wrong angle you’d be better off with Braille. That said, the arrangement of the five knobs is intuitive enough and easy to learn.

Your reviewer has owned a few Selmers down the years, including a couple of TNB50s: one from the croc-skin era, which excelled at Marshall-style overdrive, and a late-60s black-panel version that had way more clean headroom and sounded gloriously huge. Our early impressions of the Scarlet Tunic suggest it’s been modelled on the latter type.

Starting with the gain set low and the master volume keeping us close to bypass level, a little bit of knob-twiddling brings us a completely clean tone that extends the highs and lows of the bypass sound very nicely – it can actually make a small amp sound like a much bigger one.

Where we go from there is not immediately apparent: the knobs and toggle switches are so interactive that it could take you half a day to explore every possible combination. But you know us – we’re going to head off straight in the direction of more noise. 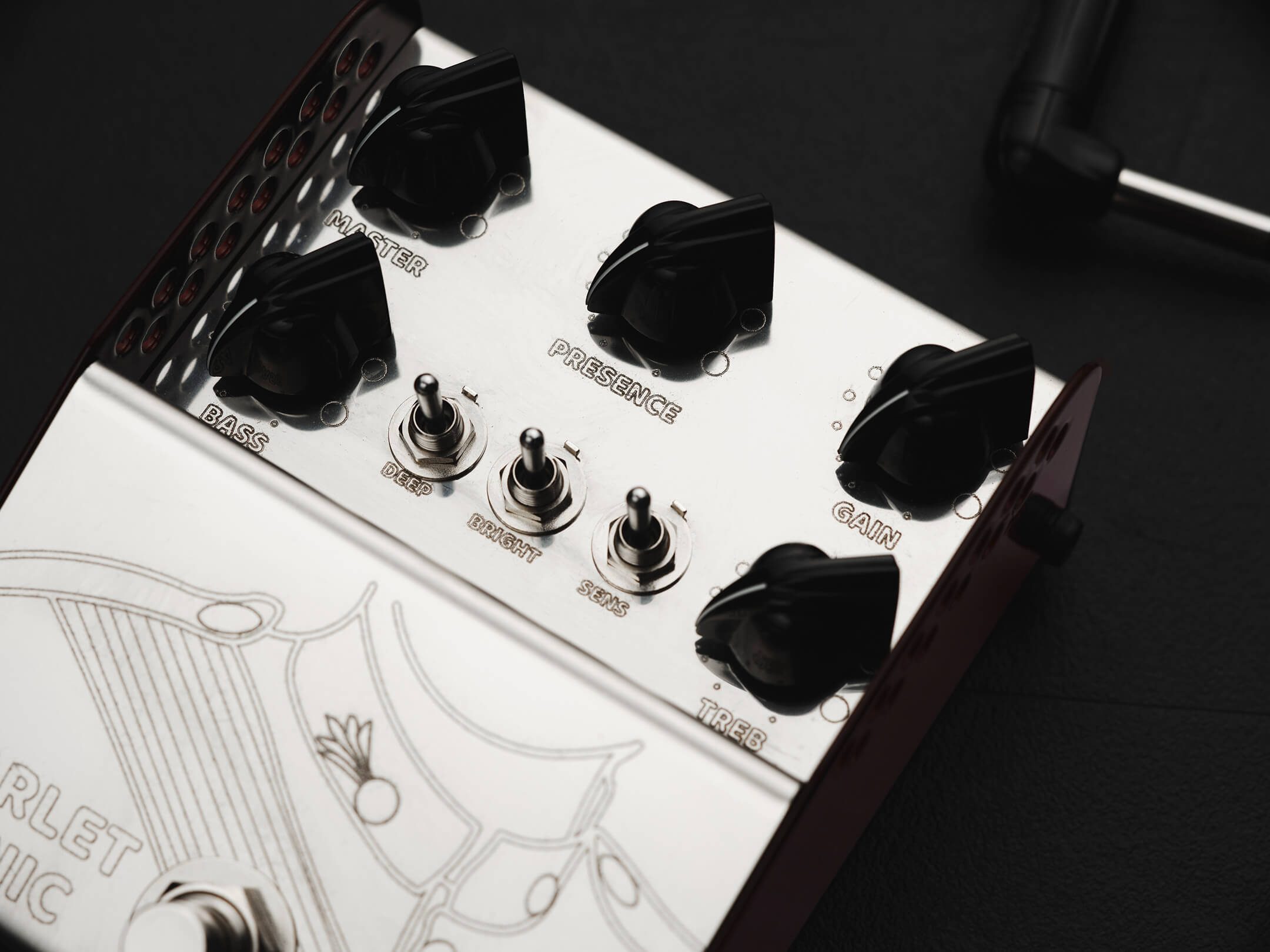 This pedal is fitted with a little transformer for the ultimate amp-like response, and what you get above all with the gain knob cranked is looseness. The treble is crisp and frisky, the midrange is wide open and the bass has bags of shunt. It does indeed sound like an old amp running close to the ragged edge, with a fuzziness on the low E string that flirts with flatulence. Dialling the gain down a bit quickly cures that, and this pedal’s intermediate crunch tones – while perhaps less outright entertaining than the full-on stuff – should not be overlooked.

All three switches have a dramatic effect, and the common theme here is that the middle position is quiet, up is louder and down is full blast – so even if you leave the sensitivity switch alone there’s plenty of scope for tone-sculpting with the other two. The bass and treble controls are nicely responsive too, but it’s presence that really transforms the character of the pedal.

The kind of zing we associate with early Floyd is right there with presence at halfway, but you can easily call up something more smooth and restrained by whipping it over to the left, or steer into Vox territory by maxing it out. We’re not talking pure AC30 Top Boost emulation here, but it gets pretty close.

Unless you have your own Syd Barrett tribute band, the appeal of the Scarlet Tunic will probably have little to do with how well it nails the sound of a vintage Selmer or anything else; what really matters is whether it rocks in psychedelic style, while offering something just a little bit different – and it certainly does that. 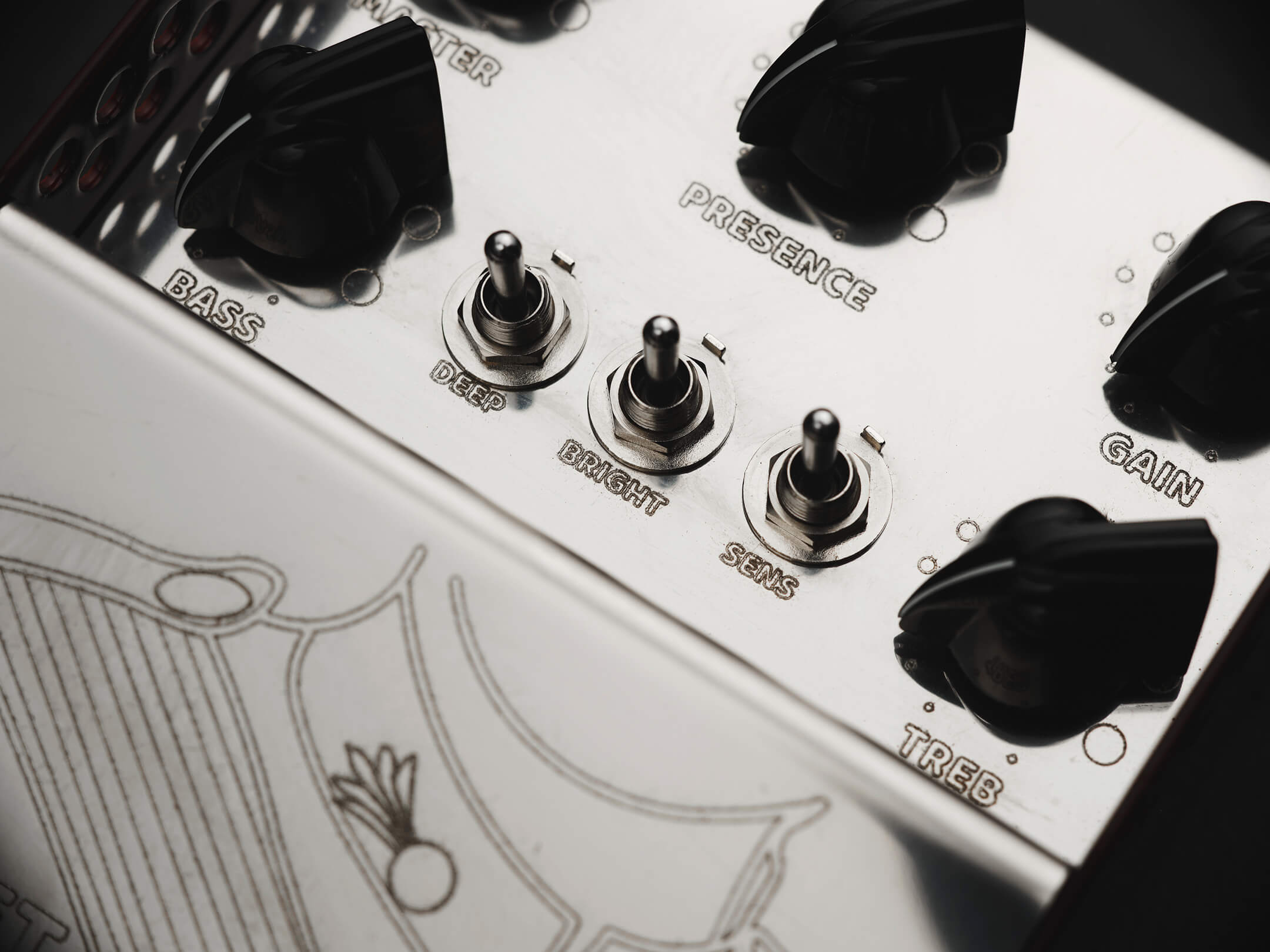