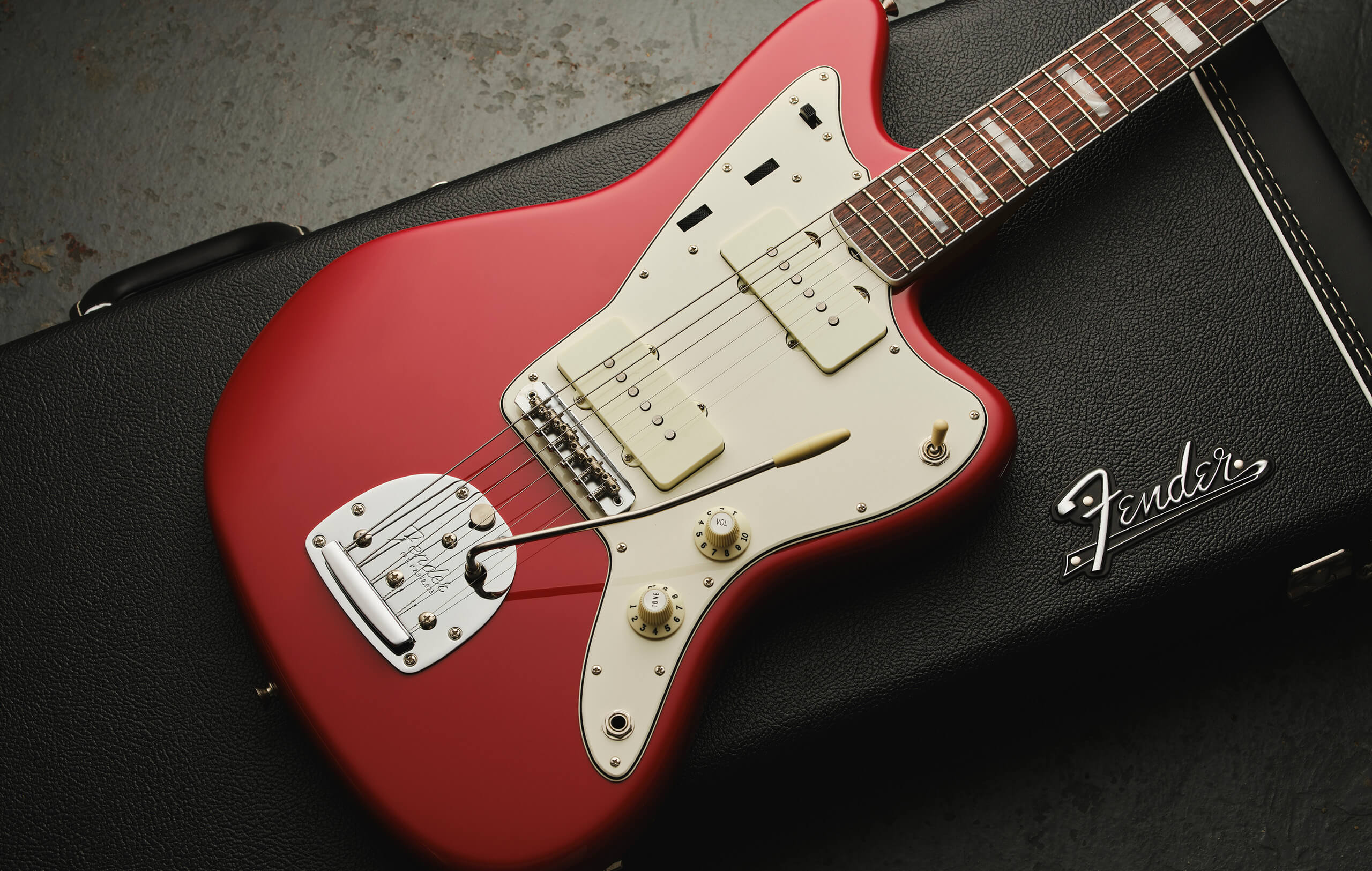 The highest-priced solidbody in Fender’s new AVII range attempts to nail the post-CBS specs of its most divisive guitar… including the bits not everyone likes.

By Richard Purvis
3 days ago

They don’t make ’em like they used to – and when it comes to Fender’s notoriously idiosyncratic offset-waist guitars, you might think that’s just as well. But for those who like things period-correct at all costs, this is the American Vintage II 1966 Jazzmaster.

In stark contrast to the American Professional II model launched in 2020, this is one for the purists, with zero concessions to modernity. That means it’s a feast for the eyes of anyone who’s into Fender history, but also means the design quirks that arguably hobbled the Jazzmaster from the start remain. So can pure mojo make the difference this time? 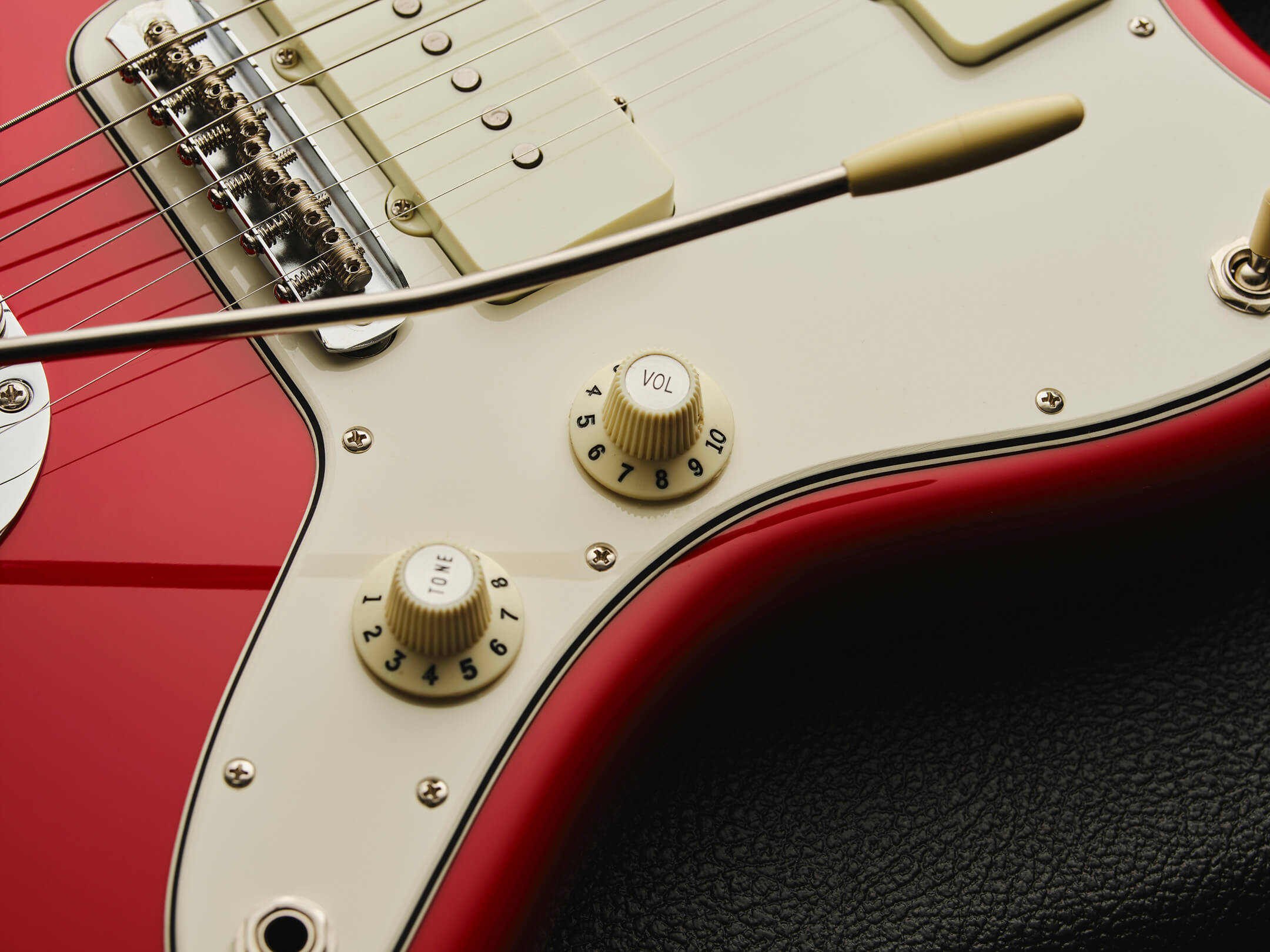 First up, the not-so-controversial basics. In most respects this is a very similar guitar to the old ’65 AVRI, with the same white ‘witch hat’ knobs and bound C-shaped neck, but this time we get big block fret markers and Fender’s new Pure Vintage ’66 pickups. If you were also expecting a bigger headstock in the post-CBS style, possibly with F-stamped tuners, well, you might just have to tell yourself this one’s ‘transitional’ and quickly change the subject. At least it’s painted to match the body.

The colour of that paint on our review sample is gloss nitro Dakota Red – a darkish shade that looks handsome enough but is quite clearly nowhere near as sexy as Lake Placid Blue, which is one of your other two options along with the inevitable Three-Colour Sunburst. What did we do to upset you, Fender? Anyway, it’s a well-applied nitro finish with no flaws that we can find. 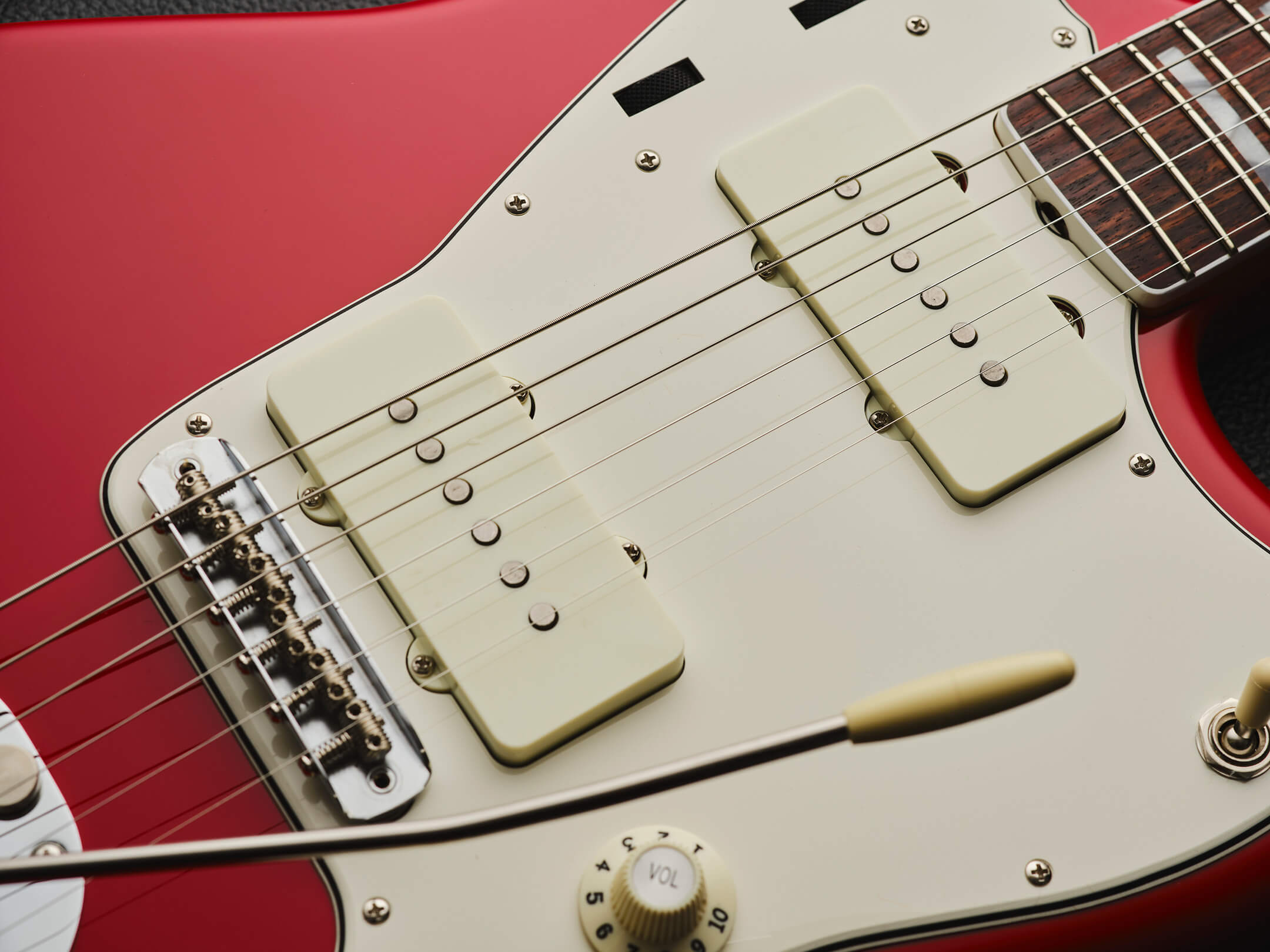 Naturally the electrics are as standard, with a three-way pickup switch plus master volume and tone, and the treble-cutting rhythm circuit with its own controls on the upper horn. Not everyone likes the ‘dull switch’, but its presence is hard to dispute in a vintage reissue.

The same could be said of the fretboard radius: 7.25” is much more rounded than the average 21st-century ‘board, but plenty of non-shredders will be happy to have a decent curve to wrap their fingers around. Where things get more complicated, however, is in the bridge area. 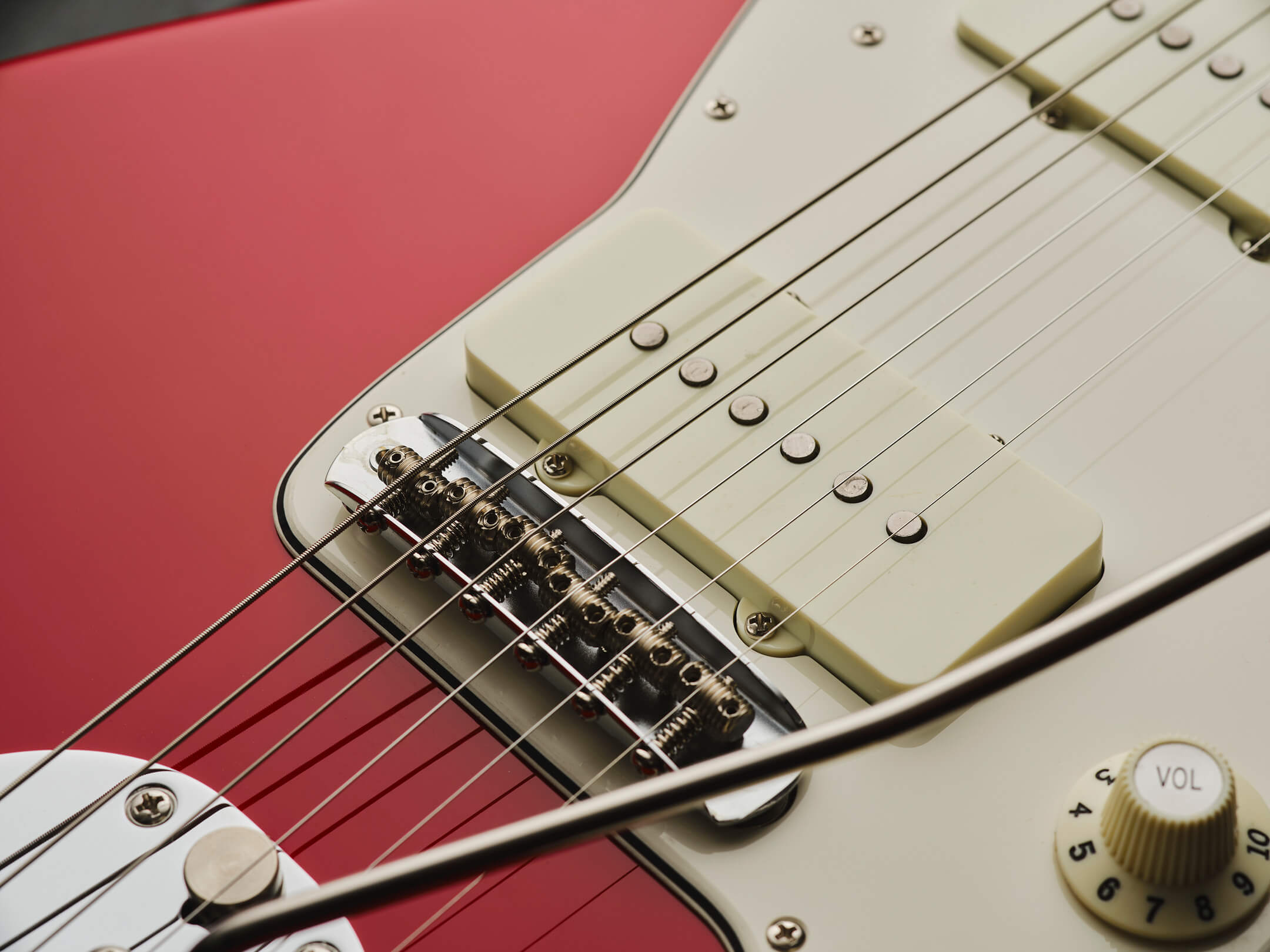 You’ll know what’s coming here if you’ve already owned any un-modded AV Jazzmaster, but here are the perennial gripes. Firstly, the traditional floating bridge has no inserts to prevent it slipping down over time, while its threaded barrel saddles – combined with the shallow break angle from the tailpiece – are almost guaranteed to mean strings popping out of place in the heat of battle. Secondly, the tailpiece itself has two large domed screw-heads right below the E strings – and in the case of our review guitar, the one below the low E is actually touching it. How sacrilegious would it have been to just move the screws inwards a couple of millimetres, or even countersink them?

Anyway, we ought to make it clear that, in contrast to some reports we’ve heard from the US, our guitar has no obvious quality control issues. The fretwork is fine, we’ve already mentioned the tidy finish, and the vibrato arm pushes in cleanly and – for now at least – stays wherever it’s left like a good soldier. 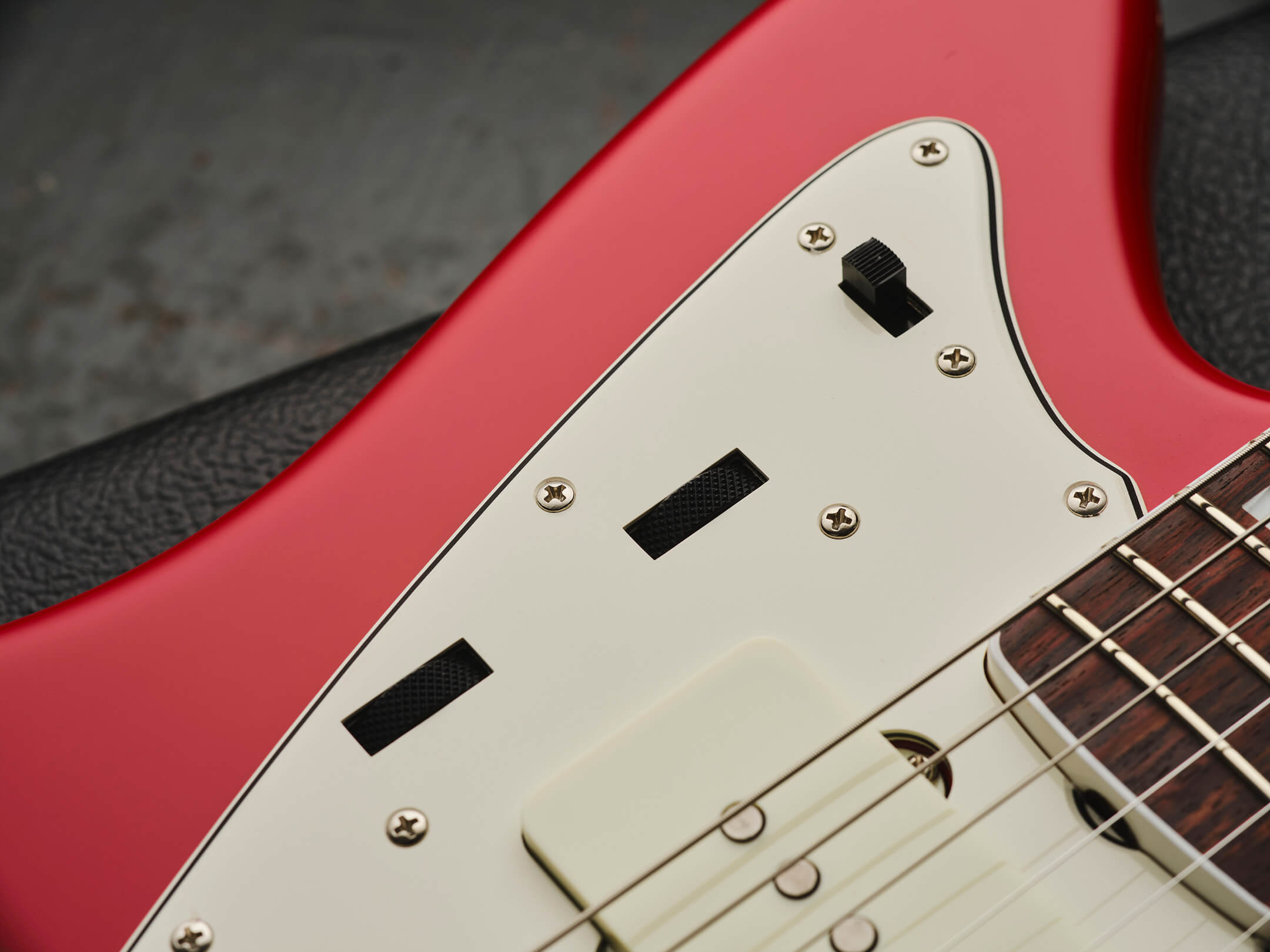 All this stuff about quirky ergonomics is fine for starting arguments with people on forums, but wasn’t the real reason the Jazzmaster sold poorly in the 60s more to do with the sounds it made? Brash and percussive, this guitar proved to be anything but a master of jazz… and in pure tonal terms the American Vintage II 1966 model is true to its heritage.
Look away now, hardcore Strat and Les Paul fans – this one’s not for you. There’s no real thickness to the midrange here, and you’ll get more bluesy sustain whacking a saucepan with a spatula. But what you get instead, alongside a fiercely crisp edge to the transient attack of every note and chord, is the sweetly lyrical character that has finally established the Jazzmaster as more than just a lo-fi underdog for surf and grunge music. 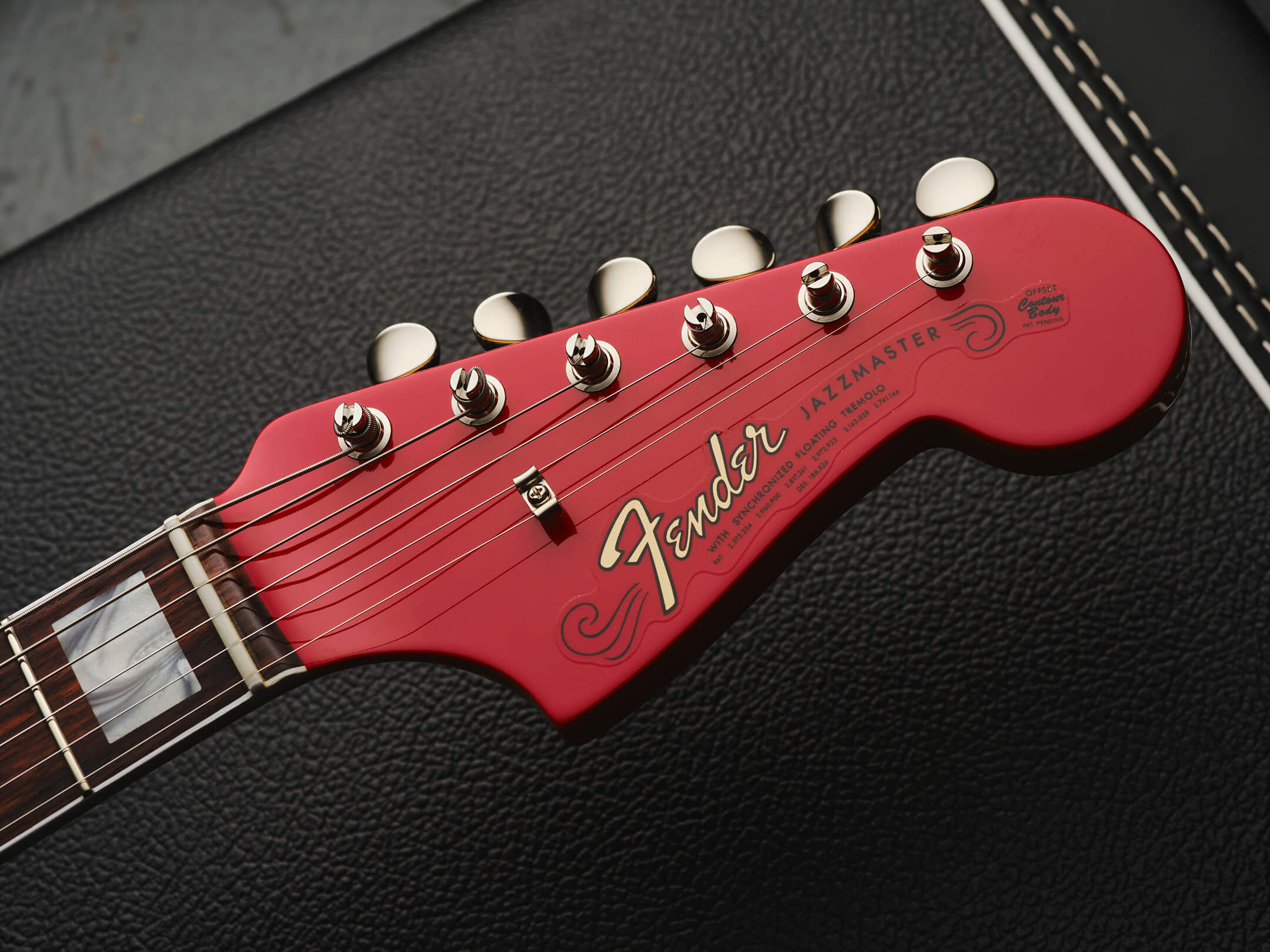 The bridge pickup is of course the most spanky, and in some situations you might want to tame its excesses with the tone control – it still sounds really nice, but much less spiky, at about halfway. You also have the option of using a Klon-type overdrive to soften the attack and thicken things up a little.

The neck unit offers its own flavour of shimmery clarity, and there really is nothing prettier in guitardom than that gently twinkly middle position. That’s especially true when you feed it to a cleaner-than-clean amp, preferably with a dash of reverb, and use the arm to add delicate vibrato to decaying chords. 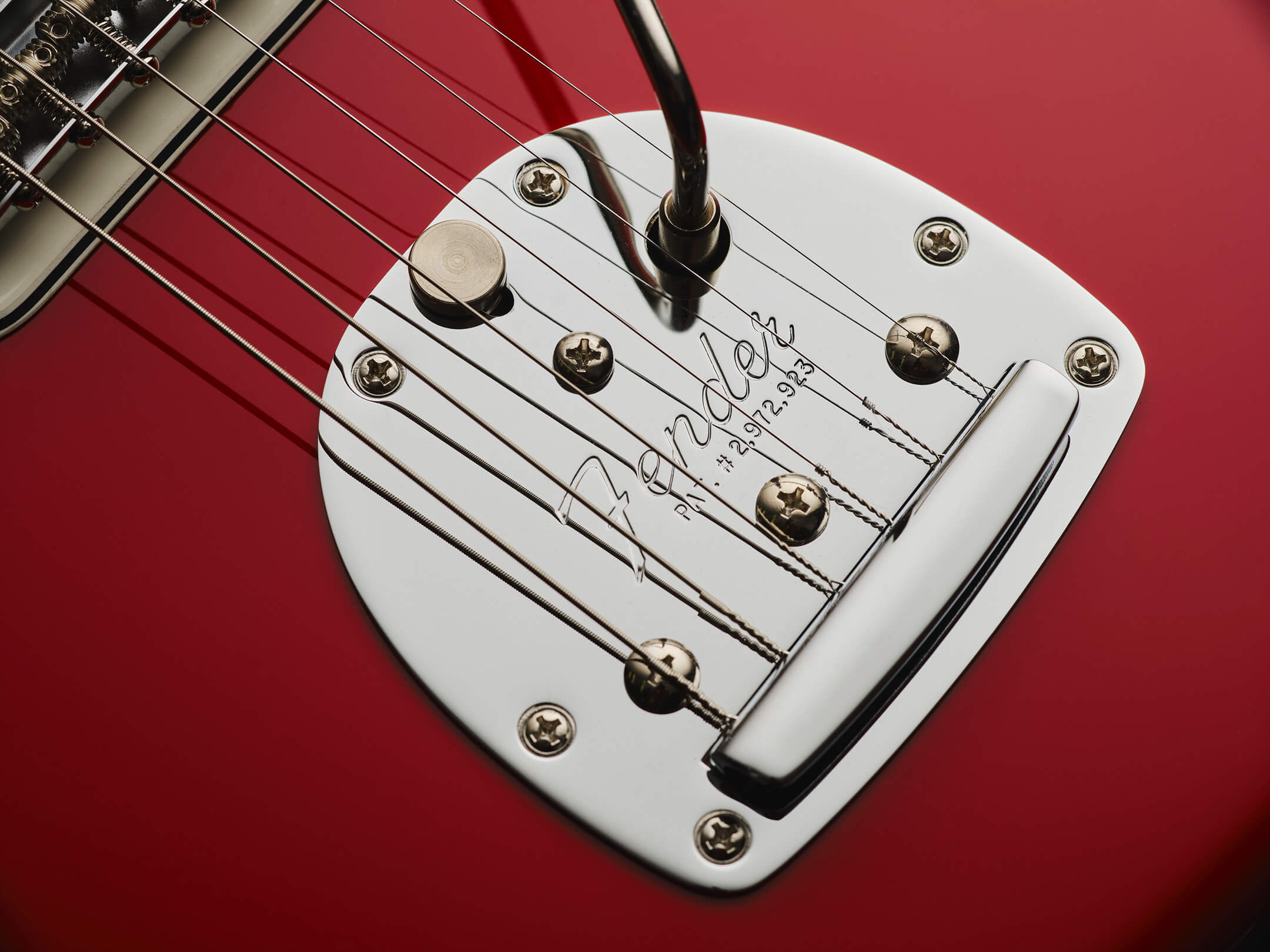 Slam on some heavy distortion and you’ve got all the alt-rock stuff covered – with perhaps even more need for the tone control now, in all three pickup positions – but we really mustn’t overlook the rhythm circuit. On a guitar that’s inherently bright, why wouldn’t you want a softer-toned option available at the flip of a slider switch? It’s a great mellow voice, and people should probably use it more. 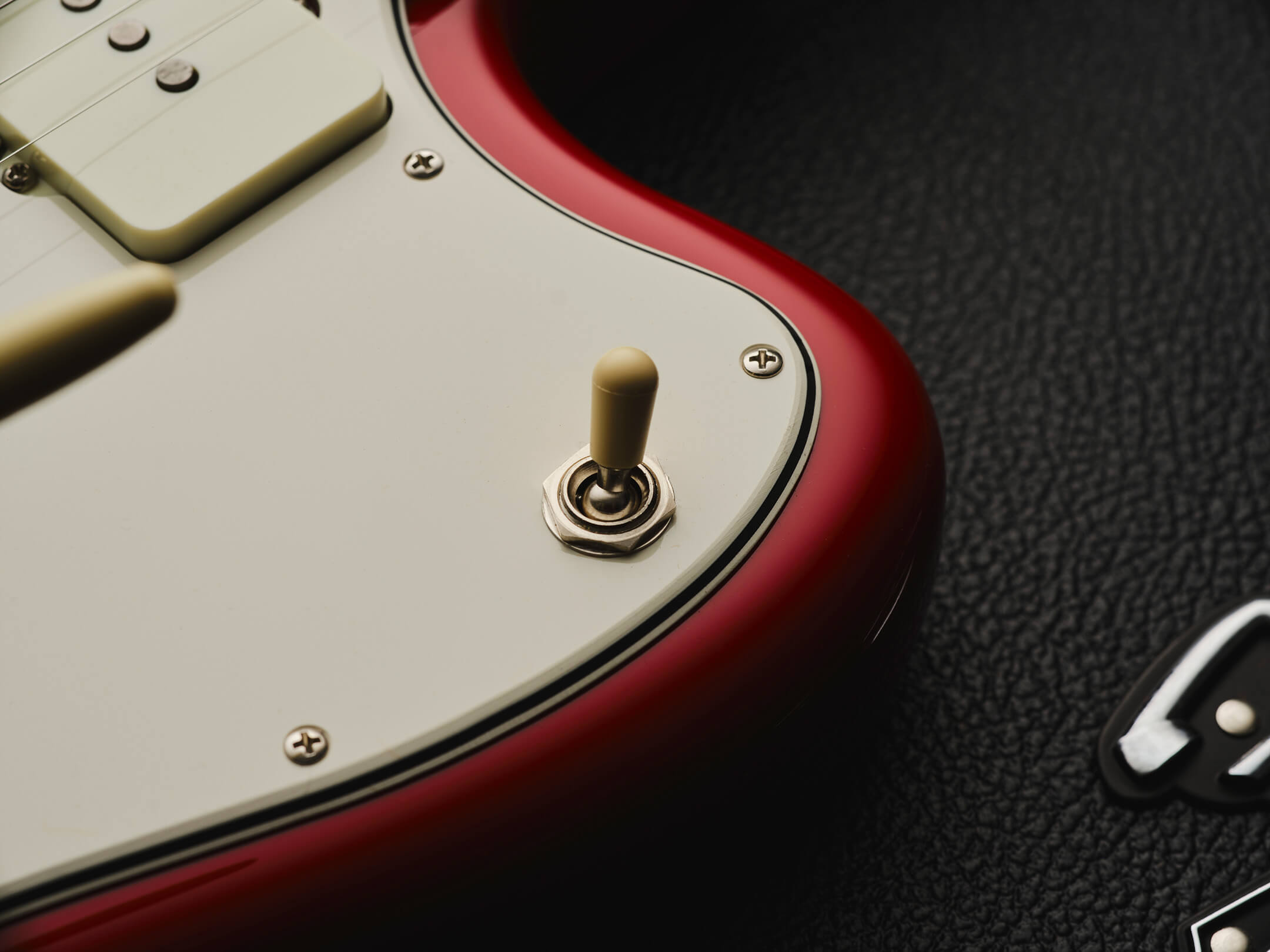 Not entirely unpredictably, the high E string on our guitar breaks at the ball end while we’re using the vibrato. This results in several minutes of foul and abusive language – and brings us right back to the question of historical accuracy versus everyday practicality. Fretboard radius aside, all the contentious parts of this Jazzmaster – the bridge, the tailpiece, even the trebly 1-meg potentiometers – are easily changed, just as they were on the ’62 and ’65 AVRIs. But doesn’t that defeat the object of going American Vintage?

It’s a question only you, as a potential buyer, can answer. Us? We’d be inclined to fit some reinforced strings and leave everything else just as it is. But in Lake Placid Blue, obviously.