“My fanbase was amazingly angry”: Plini on his new album, signature guitars and ‘that’ Doja Cat controversy

The Australian virtuoso on how the pandemic was a blessing in disguise for his second LP, Impulse Voices, how he dealt with Doja Cat ripping off his song on MTV, and why he needs to listen to more Steely Dan. 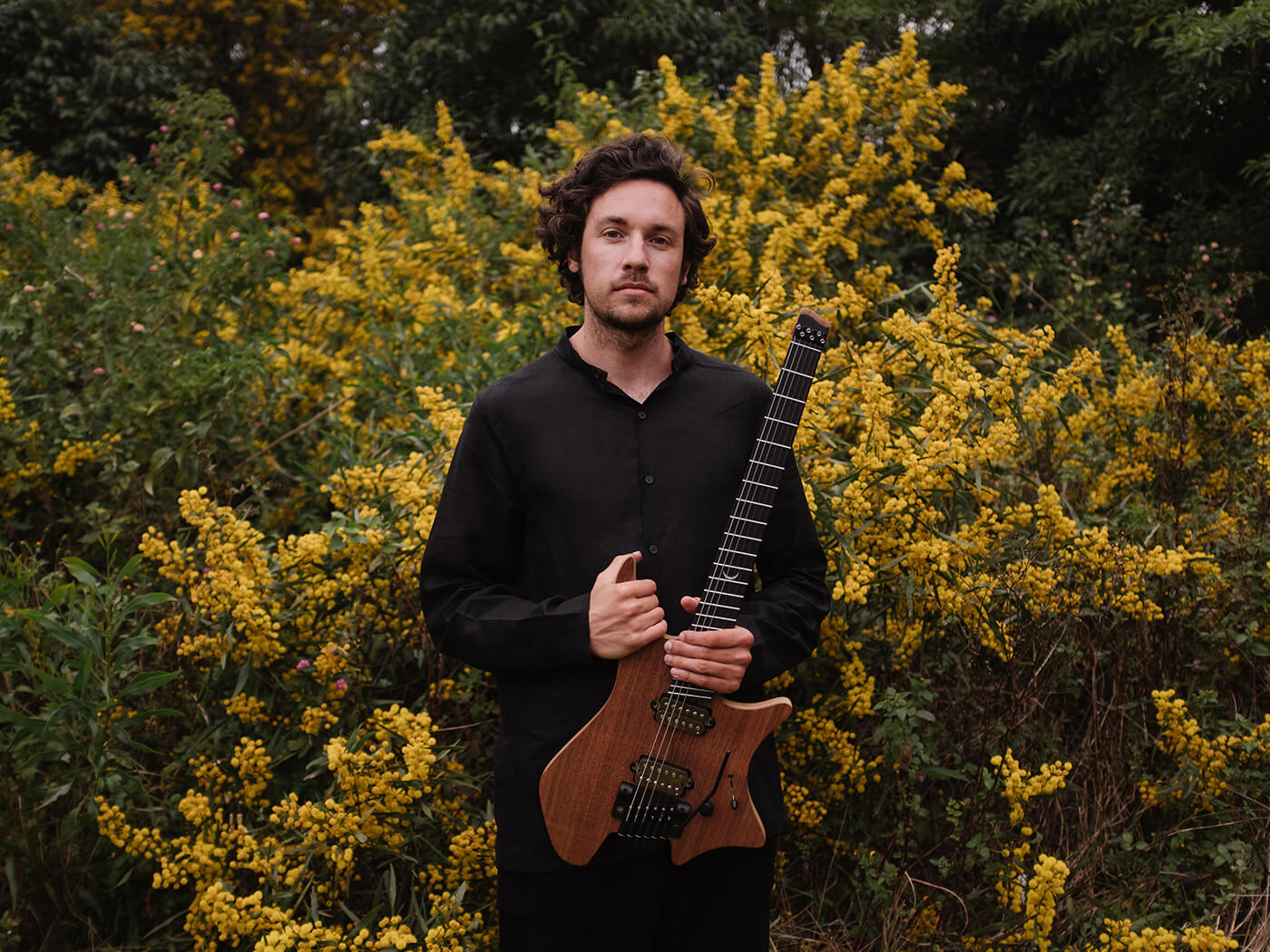 ​For most musicians, 2020 was an uneventful year – quite literally, in fact. For Australian instrumental virtuoso guitarist Plini, however, last year was a mixed bag, with the understandable lack of live shows and touring being set against some important musical landmarks, and a high-profile slice of drama with a chart-topping popstar.

The landmark reached was the writing, mixing and release of his second full-length album Impulse Voices, released to critical acclaim and proving once again that he is at the vanguard of the evolution of guitar instrumental music. And the drama? Well, how about having a section of your music lifted from its natural habitat and inserted into a performance at the MTV European Music Awards to millions of people worldwide without permission and without credit, and only brought to your attention when you find yourself trending due to a legion of bat-eared fans who have taken umbrage to the purloining on your behalf?

Such unauthorised borrowing would likely enrage many a guitar hero (remember Joe Satriani vs Coldplay?) but our imperturbable guitar-slinging protagonist took it in his stride. But there was a lot more to this fall-out as we discovered when we sat down with him via Zoom to talk about the release of his second full-length album.

So what were your plans before the pandemic struck?

“I planned to record from March to May, have the album by the end of May, come to Europe and do summer festivals in July, and then do a headlining tour in the States probably later on in the year. In reality, the album was mastered sometime in October, which is a good thing because I wasn’t finished until then. So, it’s kind of like I got an extension on my assignment thanks to everything being cancelled!”

So the time you were afforded had a positive impact on the album?

“Yeah, because I have a hard time saying no to tours as I’m pretty new to it. I hadn’t released anything in a couple of years, and I have all these ideas that I wanted to work on. I always try to make the most of what’s happening in life, so I just took it as an excuse to spend more time working on the songs.” 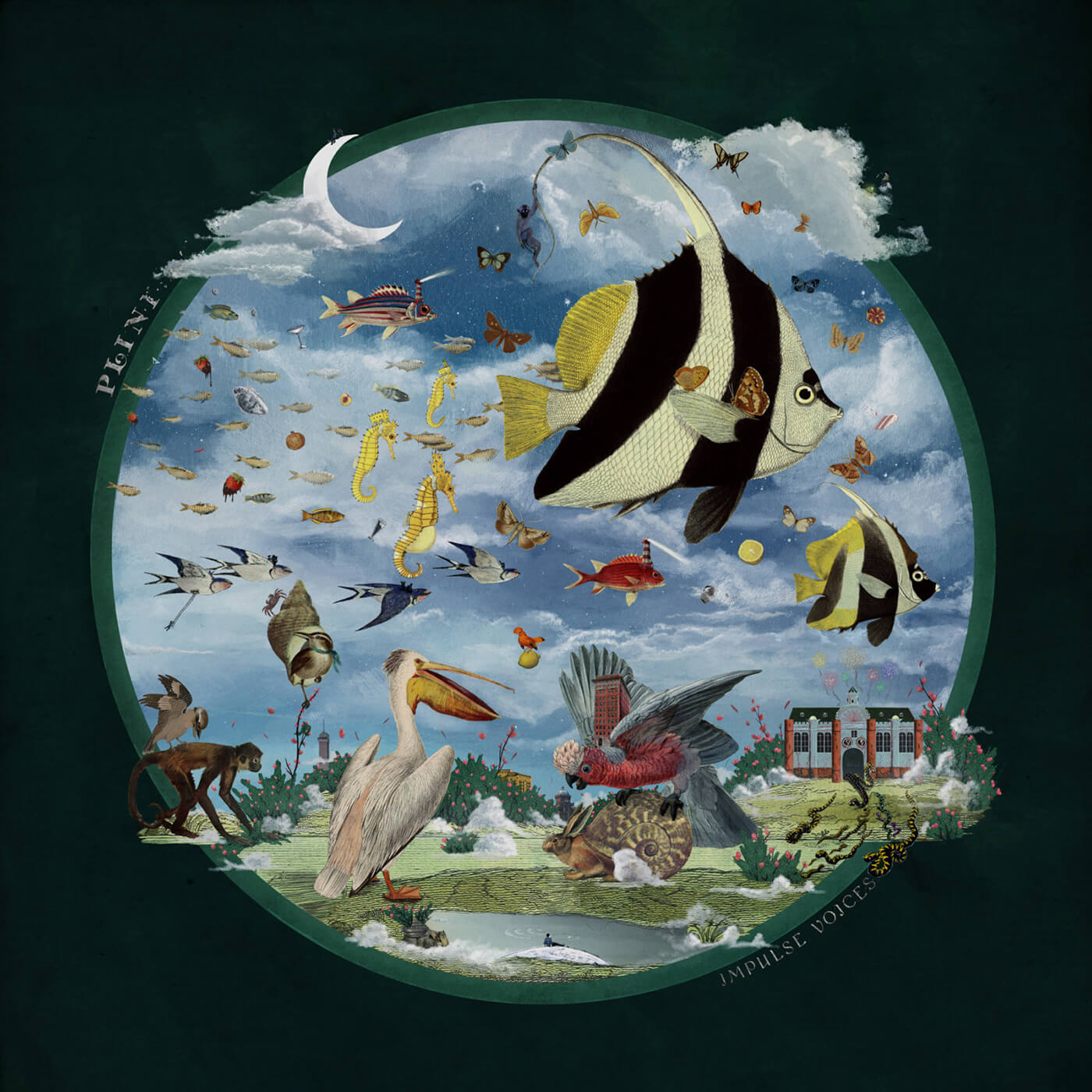 Talking of the new album, the song Ona features a very dissonant but outstanding solo, very reminiscent of Holdsworth. Is he an influence?

“Definitely a huge influence, or at least a huge inspiration in that I love his playing and his tone. But I always have no idea what he’s doing half the time. Not even half the time – all of the time! I’ve watched a bunch of instructional videos and that hasn’t helped me in the slightest.”

What appeals to you about dissonance?

“It might be something similar to loving metal music. The average person would go to a live show and hear a singer sing, and if the singer suddenly screams that’s going to be pretty jarring. But then you get a show where all they do is scream and to someone like me that’s totally normal and I just stand there smiling and enjoying it. I think I have a similar attitude to music in general. I listen to all these different sorts of things to the point where a more dissonant solo or chord is no less pleasant than a really simple one or an uplifting pop melody.” 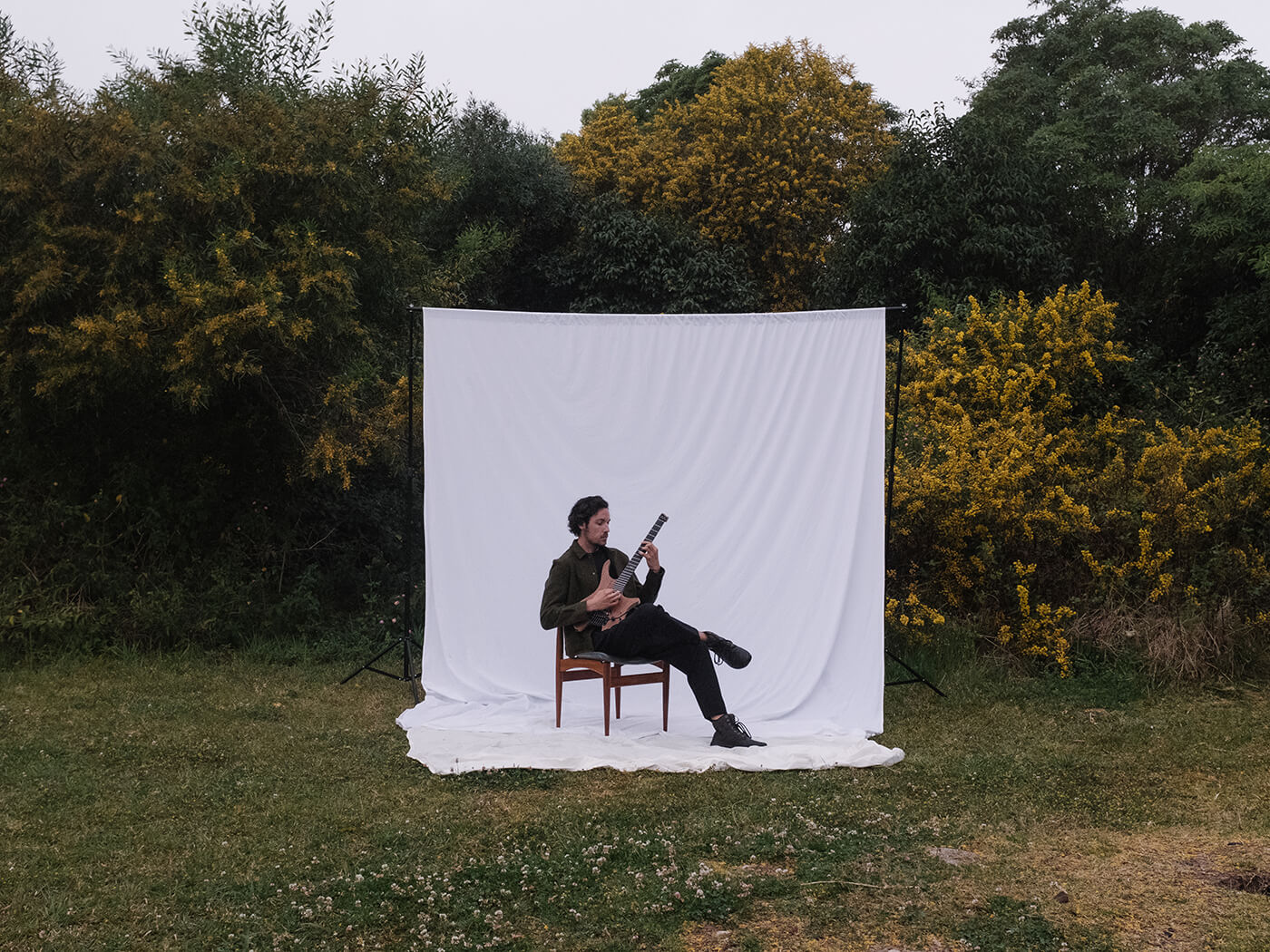 Sounds like a Steely Dan influence at the beginning of Papelillo?

“The influence for that for me was more ‘Snarky Puppy’ for some reason, even though it doesn’t necessarily sound anything like them. Also, a bit of Michael Jackson which probably doesn’t sound particularly obvious. I think he has a lot of mixolydian songs. I guess I’ll listen to more Steely Dan and then get back to you!”

What were you using amp wise?

“I recorded it all using the Neural DSP software and then I sent all the DI’s to Simon, as well as all the settings that I used. I think he ended up using the tones I sent him on all the cleans and leads and just tweaking the eq a bit along with some of the reverb and delay settings but keeping the main compressor, drive and amp settings. For the rhythm guitars, I think he re-amped them all using his 5150 and a JCM 800 or 900.”

The whole Doja Cat thing catapulted you into the spotlight in a way that must have been quite unexpected – what has the fallout been like for you?

“I think the whole thing was quite wonderful because it was a one-off performance: it’s not like it was stolen for an album or something like that. There was a musical director that took a bunch of the song and probably should have reached out to me first and didn’t. My fanbase was amazingly angry to the point that it became news. I got news pieces in The Daily Mail even! Ultimately, I don’t know if it’s the sort of coverage that’s helpful, but I’ve seen a few people messaged me saying, ‘I’m a huge Doja fan and I found about you because of this, and I love it’.”

Do you know if the musical director got in trouble for it?

“Doja Cat actually messaged me on Instagram to say thank you for being chill about it and sorry that it happened. She said, ‘I heard your song it’s really great’, and that she wouldn’t work with that musical director anymore because she thinks what he did was very unprofessional. So, I guess he got his comeuppance.

“I think it’s just poor etiquette I suppose. If he hit me up and was like, ‘Hey dude I’m a big fan, I’m arranging a performance for Doja Cat and I want to use a riff that’s like this, is that cool?’ I’d be like, ‘Yeah sure, tag me when it comes out.’”

At the time you said it was disappointing but not surprising, and that the industry was more interested in “clout than creativity” – what did you mean by that?

“This is what happens when I type instead of talk on Zoom: I sound a lot more serious! I think it’s because of the way the musical director shared it, didn’t say anything, and then backtracked. Then he said something like he was paying tribute to one of his favourite artists and then he called himself a musical genius, which I thought was a bit strange. The whole thing kind of reminds me of a certain part of the pop session world that I get to see, especially if I visit LA – a whole lot of people talking and not saying anything in particular to appear cool, successful and famous. I think it’s an example of that, which has got very little to do with our little nerdy corner of guitar land where it’s like, ‘Ooh what effect did you use?’ or ‘What percentage of reverb is on the track!?’”

Did you benefit from it in terms of sales at all?

“Not really. The song Handmade Cities that had the bit taken from it got a few thousand more streams as a result. Not necessarily anything meaningful but it was definitely funny.” 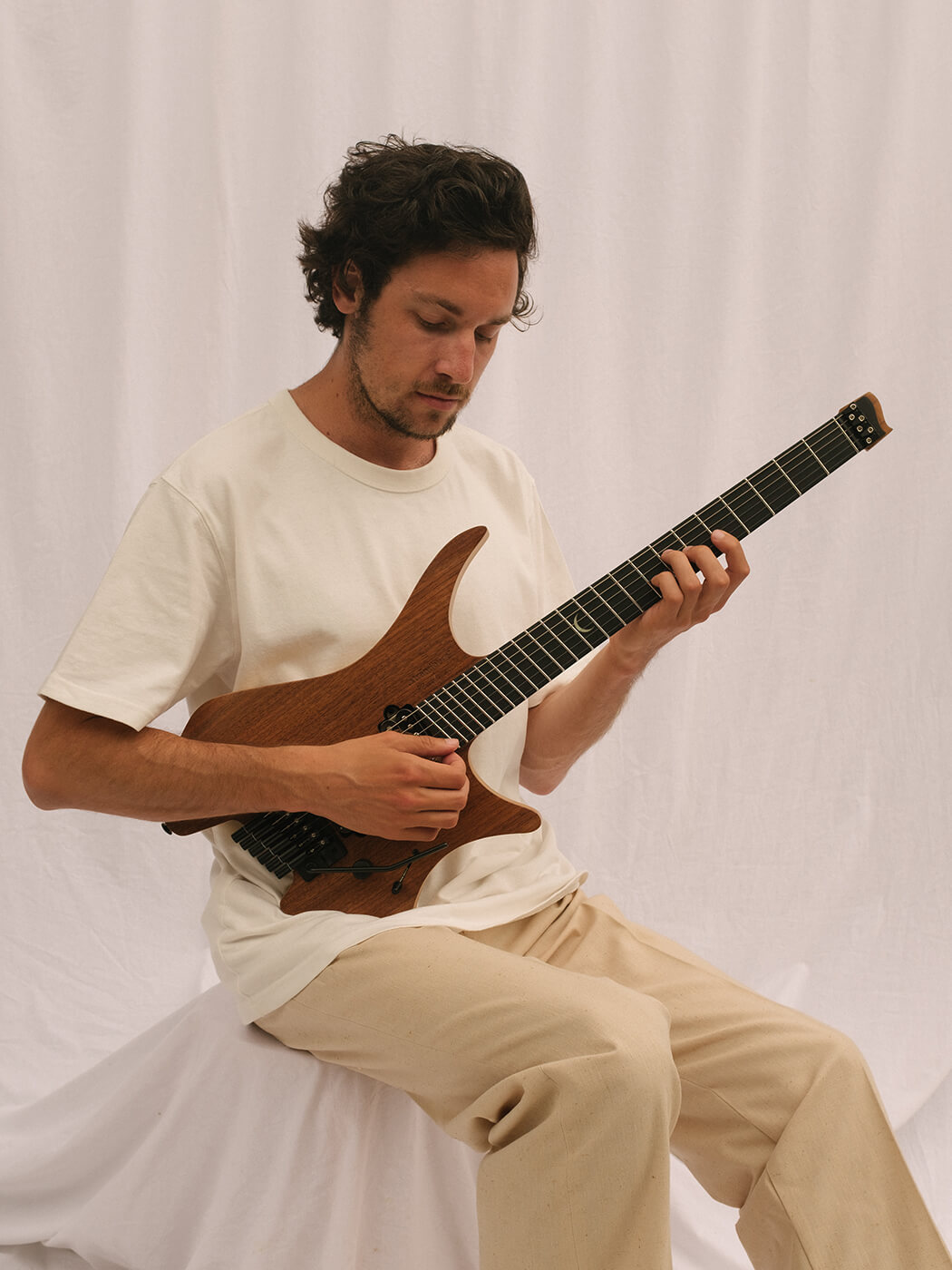 Before you became a pro musician you were training to be an architect, do you see any similarities between writing music and designing buildings?

“It’s always interesting to look at any kind of artform that you find inspiring and try and analyze as though it’s music. Maybe with an amazing church you walk in through a small door into a giant room and maybe that’s like having a quiet intro to a song that turns into an expansive hundred instrument chorus or something like that. I guess you’d find in a lot of great buildings, maybe they used two or three materials but really interesting throughout in different ways, and in a song you might have two or three instruments that are used to the fullness of their capabilities.

“It’s quite vague to make those parallels. It’s not necessarily going to make a song happen, but I think it’s interesting at least to cross reference as a way to see if I’m making a song in the same way that a great artist makes a great painting or a great chef makes a great meal. A lot of the time that means you not putting everything that you know into that one thing; it’s about being restrained and exploring one idea at a time.”

Do you have any plans on updating your Strandberg signature model or does it still do everything you need it to?

“It’s been updated as far as the prototype that I have that I used on the album. It’s going to come out hopefully early next year. I’ve also got a signature pickup set coming out. Strandberg have just started releasing their own pickups with an amazing pickup maker called Michael Frank. I voiced my set based on the ones that they’ve been doing but it’s tweaked a little bit. I have a split coil in the middle position because I have a 3-way switch, just how I like it.”

Impulse Voices is out now.