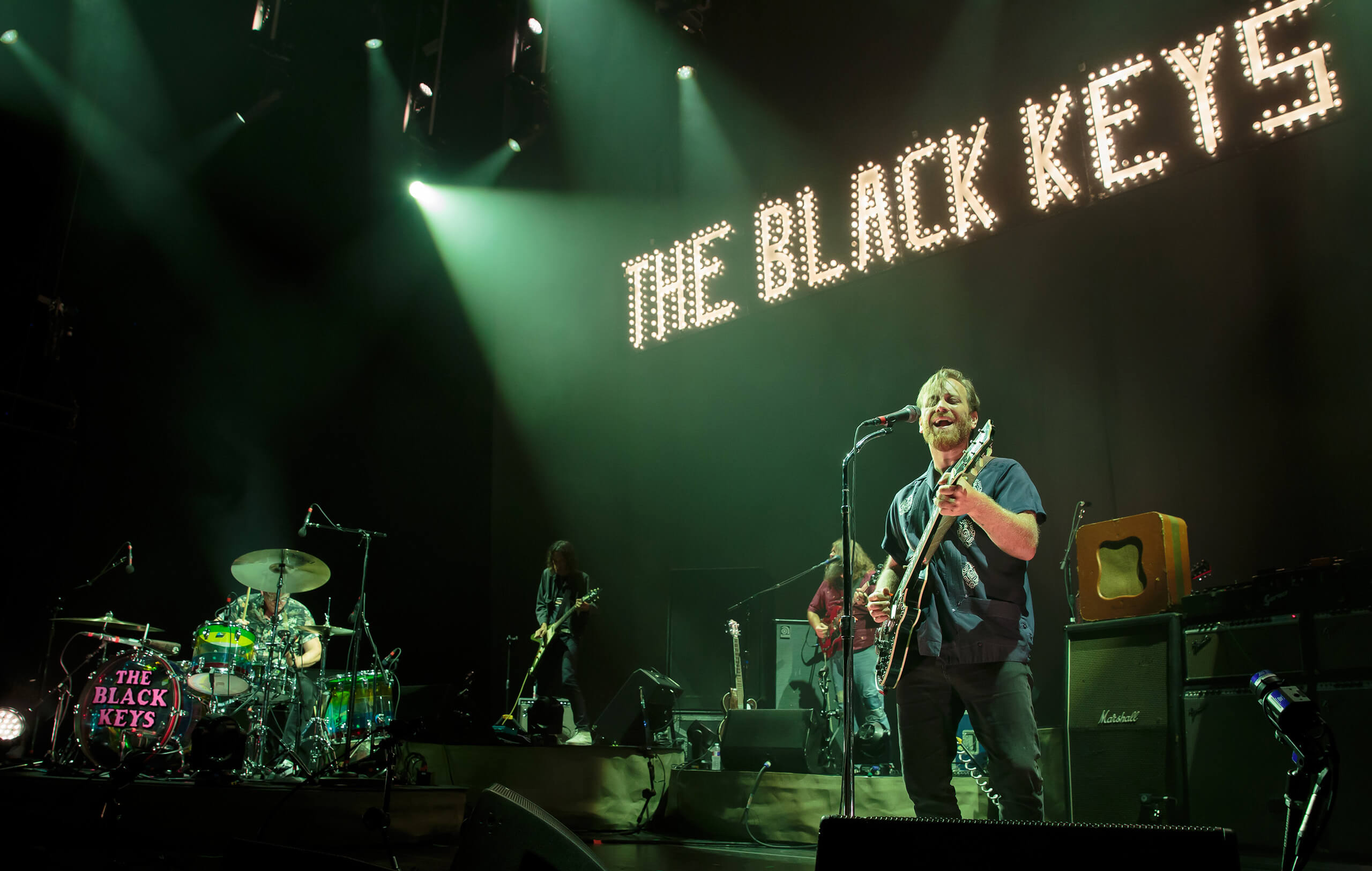 Revitalising blues-influenced rock across the last two decades, The Black Keys have balanced tradition and exhilaration with aplomb.

It’s something of a surprise when we count up the sheer quantity of cherished garage rock bangers that have come courtesy of Messrs Auerbach and Carney. The Black Keys’ widespread adoration is a far cry from some twenty-one years back. Back in 2002, the duo’s shabby debut, The Big Come Up was quietly respected as something of a ramshackle alternative to a slicker, more streetwise breed of indie, then in its Strokes-led ascendancy.

In the years since, Dan Auerbach and Patrick Carney’s musical exploits have elevated the pair into the modern rock pantheon. Over eleven studio albums, the duo have both celebrated and found new space for foundational blues forms within pulse-quickening chart-toppers, such as Lonely Boy, Tighten Up and Howlin’ for You. A veneration for the guitar – and its centrality to blues tradition – runs throughout The Black Keys’ canon.

In this feature, we take a dip into this riff-driven back catalogue, and pick out those guitar moments that highlight Dan’s mastery and love of his chosen instrument.

Led by a fluid and menacing riff which Carney struggles to rhythmically lock in with, the incendiary guitar of this fourth album highlight exemplifies the early Black Keys sound like few others. Though meandering and loose in performance, Auerbach’s fuzz-drenched riff keeps itself tightly constricted within the pentatonic scale. Dan’s ever-widening rig incorporated a number of amps at this point, and this track’s particular grit likely came from pushing his then-favoured Ampeg B-12XT to its limit. Though a hoarder of pedals, Auerbach only brought out two when recording Magic Potion, a Maestro Echoplex and EHX Green Russian Big Muff Pi. The latter of which coats Just Got To Be’s blazing lick.

The instantly recognisable blues rock riff that kickstarts this essential ‘Keys classic is a shining example of Auerbach’s penchant for hugely memorable, yet economical riff-writing. Though a simple open-E-minor pentatonic based movement, the repeated pitch plunge on the open E (via a BOSS Super Shifter pedal depression) prepares us for a hair-raising joyride of minor (and major) pentatonic guitar work across one of the band’s catchiest and enjoyable workouts. Taking its cues from Johnny Burnette’s cover of Train Kept A-Rollin, Auerbach infuses the arrangement with blues rock legitimacy. The Danger Mouse co-produced mix sprinkles in sparkling keys, a throbbing low-end and some exquisite backing vocals. It remains a hook-stuffed beast it’s seemingly impossible to tire of.

This growling third album highlight remains a solid fan favourite in the BK songbook. Cooked to a crisp with a heavy helping of fuzz, loud amplification and a savage performance style, Girl Is On My Mind’s ascending riff ladders its way forward, seemingly growing with each wave. The intensity of the track reaches a crescendo as another guitar enters the fray. Eventually, it falls away, leaving a more plaintive, clean tone for a low-key resolution. Recorded within an abandoned tire-manufacturing factory, the lonely atmosphere is palpable in the surrounding space of this early staple. Girl is on My Mind became a popular choice for advertisers in the mid-2000s, who leaned on its raw ferocity to sell their wares. Not least Sony, who used it for their Sony Ericsson ads.

An electrifying El Camino rollercoaster, Gold on the Ceiling juggles an assortment of interlocked guitar textures with some spirited keyboard work. As with Howlin’ for You the track’s production (also overseen by Danger Mouse) re-fits the ‘Keys as a gnarled post-glam force, taking more cues from T-Rex and The Sweet than John Lee Hooker. That being said, the guitar work here is tightly deployed, and effectively bolsters the song’s carefree vibe with pure blues economy and panache. While the staccato riff that precedes the chorus has a satisfying heft, it’s the showboat soloing between verses that really steals attention. Spryly darting between the confines of the C major pentatonic, it’s some top-notch ornamentation.

With its glam rock-recalling beat and heavily processed guitar lines, some fans of The Black Keys’ formerly more raucous approach might have been perplexed by Howlin’ For You’s carefully sculpted mix Those purists aside, this Brothers keystone has become another of the band’s more widely known tracks, and a driving anthem for the ages. Though this stomper garnered increased radio play, its central tone was achieved via experimentation. Using a Supro Martinique, Auerbach switched the pickup position to the bridge’s piezo pickup – typically designed for acoustic guitars. “It’s sort of like an acoustic pickup, which is not intended to go through a fuzz pedal.” Dan explained to Rolling Stone. “You get this weird, buzzy, thin, cool sound and we used this a bunch throughout the record.”

The title track from the duo’s second album, Thickfreakness is less a song and more a guitar-led mood piece. Spewing boiling hot riffs on either side of its central bedraggled blues motif in A, Dan concocts a whisky-soaked ramble down the lanes of rickety, backwoods blues. Allegedly the result of chaining numerous fuzz pedals together (likely the Maestro MFZ-1 and ZVex Octane 3), the scorching tone is everything here. But it’s not all down to pedals and boosting, much of the guitar’s low-end leaning also due to Auerbach skilfully playing his Fender Telecaster with his fingers. While the studio version is an invigorating listen, when performed live the track becomes a far more intense beast.

Brothers was replete with clever fusions of 12 bar blues rock forms and contemporary production. As the lead single from the record, the slinky riff and robust rhythm of the Danger Mouse produced Tighten Up enraptured the ears of those who might have previously found the ‘Keys a little too rough around the edges. While its verse is punctuated by scratchy rhythmic chucks, the repeated snaking riff in F♯ minor (which manifests itself in various harmonised and octaved forms) still stands as one of Auerbach’s strongest ear-worms. The tempo shift near the song’s end – influenced by The Clash’s Should I Stay or Should I Go closes out the single on an agitated high. It was these stellar ingredients, coupled with its rootsy lead vocal, that led the song to roar into the Billboard Top 100, smash to the top of the Alternative Rock chart and give The Black Keys widespread success for the first time.

Beginning with some meticulous fingerpicking from Auerbach, this El Camino gem shifts on its heels around half-way through its run-time, lurching from the intro’s delicate musing into an enormous sounding, heavy rock powerhouse. With serpentine leads slithering around the fringes of the mix, …Submarines ends with some of the most explosive riffing on the band’s 2011 album. Though it owes an unmistakable debt to Led Zeppelin’s masterpiece Stairway to Heaven, Little Black Submarines demonstrates Auerbach and Carney’s mastery of light and shade – a juxtaposition hit upon late in the day when neither a purely loud or quiet approach was working. “We actually did that song in two versions, an acoustic one and an electric one and spliced them together.” Dan told Rolling Stone “I think that the electric half of that song is the closest representation of our live show than anything we’ve done before.” The delirious mania of the song’s final section hinges on the fact that it’s actually the very first take, captured when the pair were still just exploring the basic idea.

Finding a perfect balance between that unchained early ‘Keys sound and a first step into a modern production aesthetic, the Attack and Release peak I Got Mine has become one of Auerbach and Carney’s biggest crowd-pleasers. Built around one of the most enduring riffs in The Keys’ songbook (and one of the easiest to learn), the brutish lead riff consists of simple rhythmic pentatonic pattern that spoils for a fight underneath a rhythmic open E string, pounded into shape by Pat’s relentless beat. It’s one of their toughest sounding cuts. When performed live, the I Got Mine’s underlying force is laid bare (as demonstrated by a now legendary clip of the duo performing it on Letterman in 2008). Though some would bemoan the direction that the 2010s would take the band, here are the first fruits of the duo’s relationship with Danger Mouse solidly balanced their organic power with the production clout that would reel in thousands of new listeners.