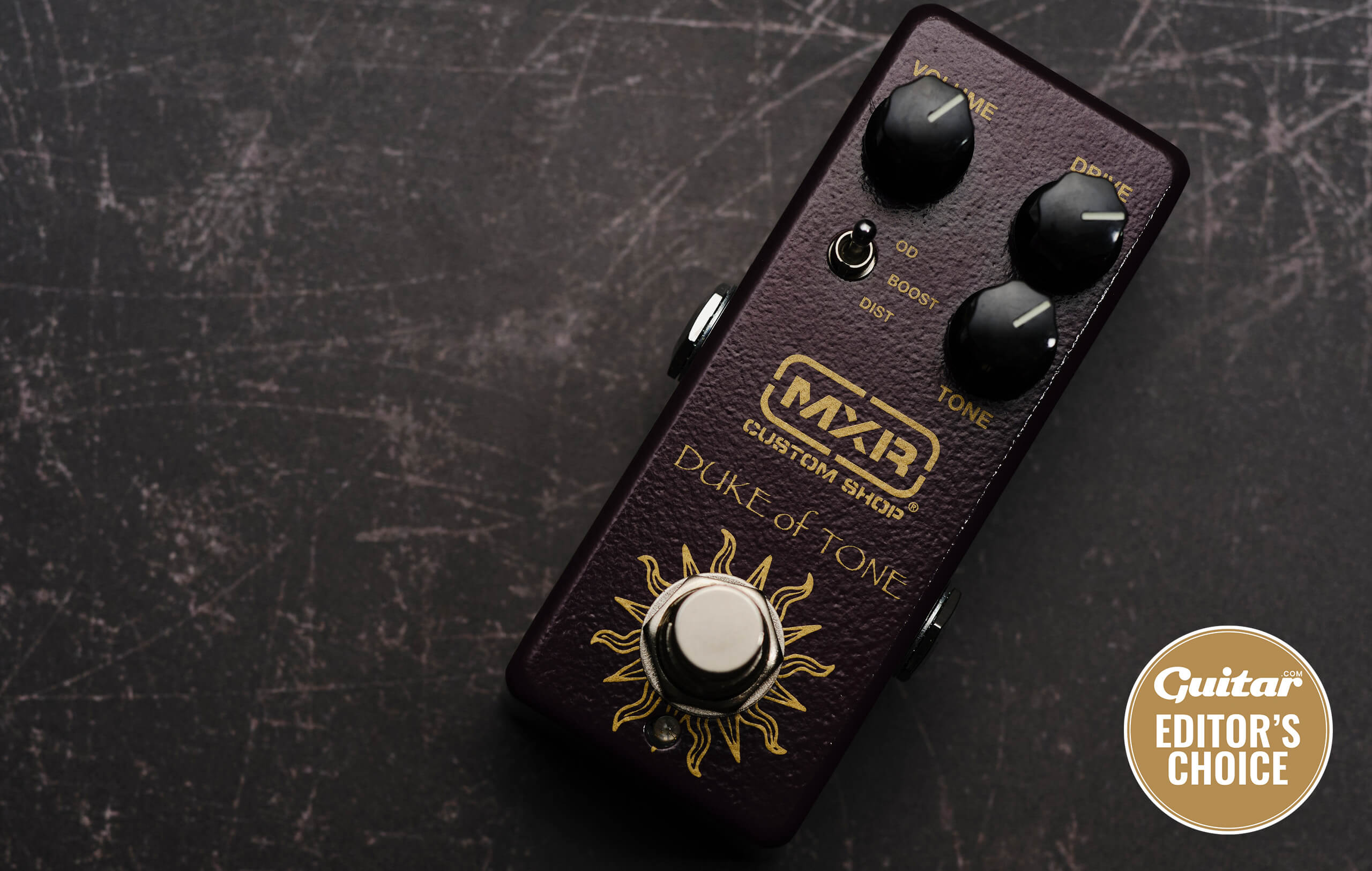 The Big Review: MXR Duke of Tone – believe the hype? The King has come to the people

One of the most talked about pedals of recent years, this collab between MXR and AnalogMan promises to bring the near-mythical King Of Tone to anyone with a couple of bills in their pocket. But is this a rightful heir to the throne?

Released in 1991 as a toneful attempt at recreating the warm bluesy overdrive of the classic JTM45/Bluesbreaker amplifier in compact pedal form, the original black box Marshall Bluesbreaker pedal is revered as one of the cornerstones of modern overdrive pedal circuit design.

But for all the praise bestowed upon it, and the reverence in which it’s been held – including by Gary Moore and John Mayer no less – the original Bluesbreaker pedal (examples of which still fetch eye-watering prices on Reverb.com today) was not without issue – for one, players often craved louder output level and wider gain and tonal range.

The Band’s Jim Weider was one such player, and one day found himself sharing these frustrations with boutique pedal trailblazer ‘AnalogMan’ Mike Piera. Always up for a challenge, Piera and Weider got to work on a revised version of Weider’s old Bluesbreaker pedal, which a few revisions later became one of the most revered and mythologised boutique dirt pedals of all time: the King Of Tone.

The King Of Tone is essentially two circuits in one box, each offering various combinations of boost, overdrive and distortion (switchable internally), and almost immediately it was a hit. Built one a time to Piera’s rigorous standards by AnalogMan in the USA, the demand by pro and amateur players alike for KOT pedals soon outstripped AnalogMan’s building team, thus the now infamous waiting list grew, and grew, and with that scarcity the pedal’s legend only grew. 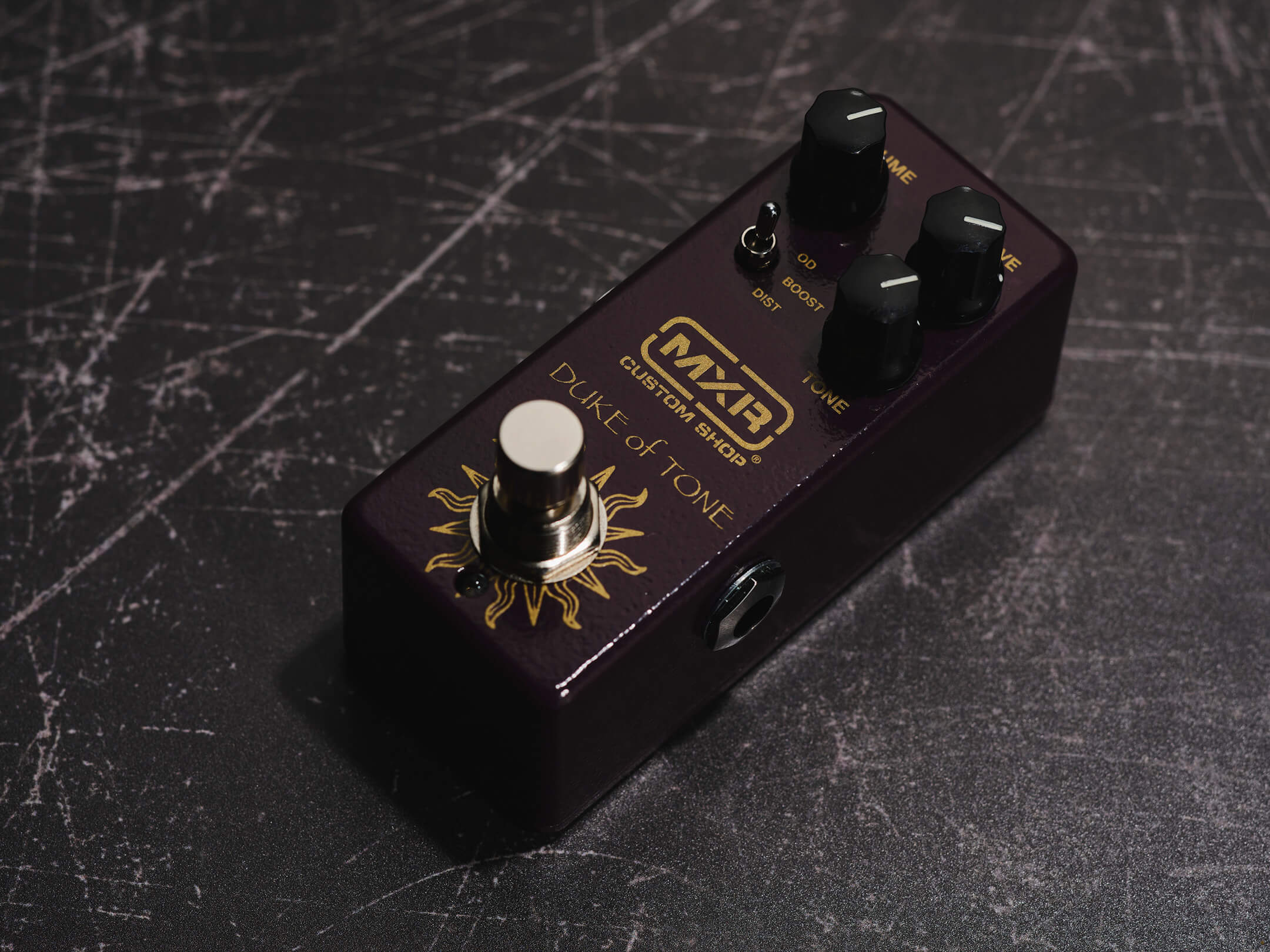 Despite this demand, Piera is a fastidious and meticulous builder who steadfastly refuses to cut corners in terms of build and components, but this means that, at time of writing, the waiting list to get a new King Of Tone stands at over four years. Needless to say, the markups on secondhand King Of Tone pedals outstrip pretty much any boutique pedal not made by Bill Finnegan.

Piera might not be willing to cut corners with the US-made KOT pedals, but he has tried to make the pedal more widely available in the past, creating a Chinese-made Prince Of Tone a few years back that effectively was one side of a KOT with switchable clean, overdrive and distortion modes.

That pedal went down well, but again supplies were scarce and it sold out quickly. Enter, then Dunlop/MXR and Jeorge Tripps – the boutique pedal legend behind Way Huge and MXR’s chief designer. Tripps approached AnalogMan with an idea for a collaboration between the two, leveraging MXR’s huge manufacturing capacity with Piera’s design genius. As Piera tells us, the reasoning behind the team-up was simple; “Getting our pedals out to more people all over the world was the main reason that I accepted this opportunity,” he says.

The result is the pedal you see in this review, the cutely named Duke Of Tone – a mini-pedal-sized version of the Prince Of Tone, produced by MXR but with full input from AnalogMan. When we ask just how much involvement in the design process, he was adamant. “Pretty much 100 per cent,” he explains. “They did what I asked, and any parts they substituted they sent me for testing and approval. It’s pretty much a Prince of Tone (which is the KOT with higher gain option, toggle option and improved distortion mode). There are no surface mount components in the audio circuit, only for the LED switching circuit.”

When news of this pedal’s existence leaked earlier this year, the online guitar world lost their collective shit. Everyone was asking the same question: can a mass-produced, sub-£200 pedal really offer the same legendary tones and versatility as one of the most iconic boutique dirt pedals ever? There’s only one way to find out… 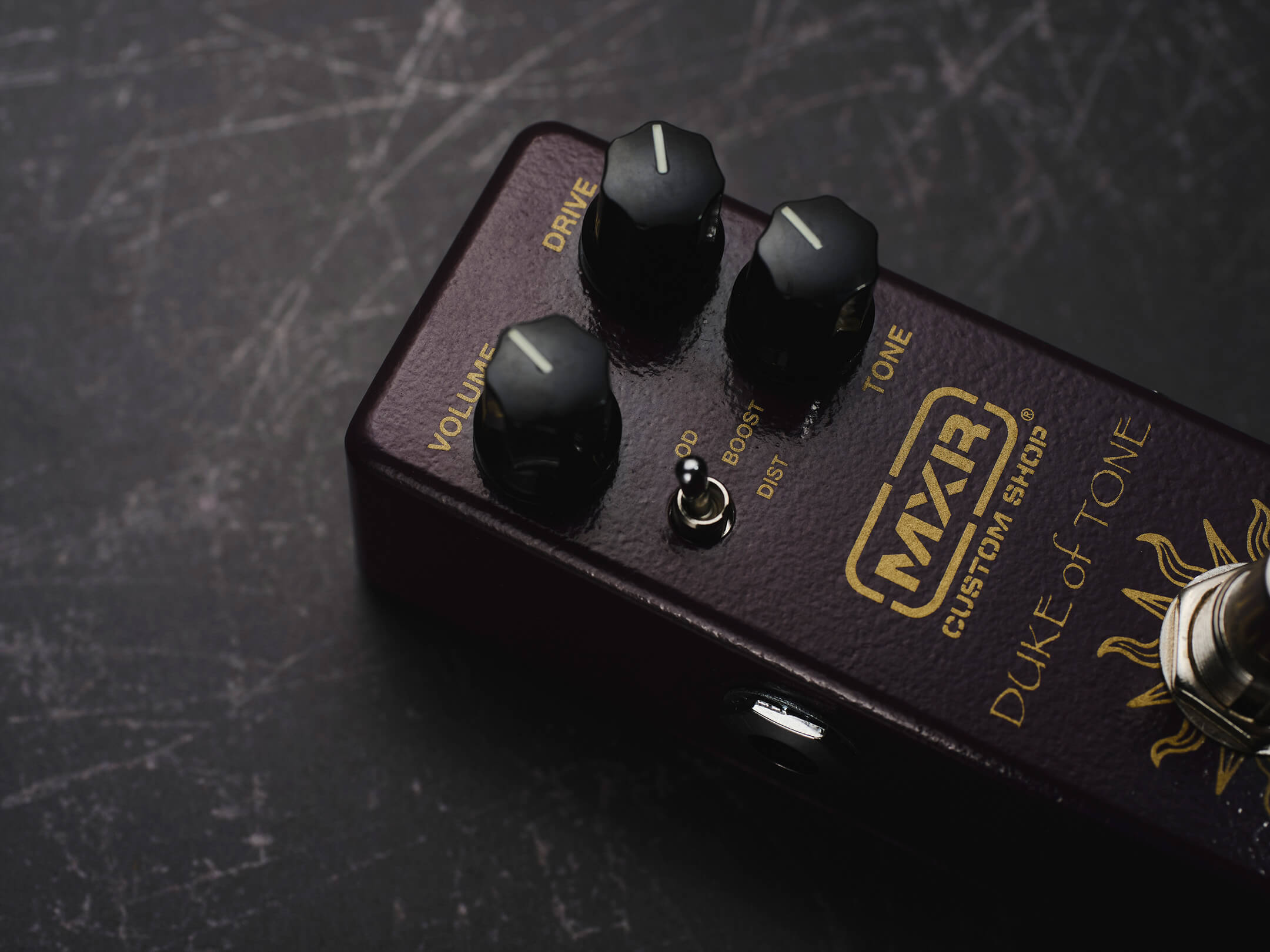 The only way to truly answer this question of course is to put the Duke Of Tone up against the pedals that inspired it – an original bona fide King Of Tone, and a vintage Marshall Bluesbreaker. We put the three pedals through their paces using our old Les Paul and Strat, plus a black-panel Fender Deluxe Reverb and a Vox AC30, and the results are fascinating.

The Bluesbreaker is a gorgeous sounding pedal, not particularly versatile perhaps, but it stamps its midrange-enriching sonic voice with authority, even into our squeaky-clean Deluxe Reverb. We do notice that it could do with a touch more gain and output however, which of course leads us to the original King Of Tone.

Adored by everyone from Tom Bukovac and Buddy Miller to Chris Buck, the KOT is adored for its dynamic and touch-sensitive responsive, alloyed with very tonally open gain and boost capabilities. At gig volume, the KOT shines with unparalleled clarity, integrating seamlessly with your rig. Offering more volume, more gain, and wider tonal flexibility than the Bluesbreaker, its more cultured midrange voice and delicate bass roll off demand more from a player but the rewards are sonic bliss – especially with the flexibility of two separate circuits.

It’s not a silver bullet pedal, however, and if you’re looking to improve the tone of an anaemic amp or guitar, you may find the KOT’s transparency and lack of compression a touch too revealing and, in this regard, the original Bluesbreaker might be a better choice.

Enough about the legends then, what about the pretender? Well, sat next to these two big-box aristocrats on our test board, we almost feel sorry for the diminutive Duke Of Tone before we even turn it on – how can it live up to the benchmarks set by these two heavyweights?

We needn’t have worried – the Duke practically redefines the term ‘punching above your weight’. It’s as if MXR and AnalogMan have taken everything we love about the KOT and BB and melded them into one remarkably affordable super pedal.

Setting both the KOT and DOT in boost mode, the similarity is uncanny, both are capable of pushing a good amp into a warm open and dynamically sweet mild drive tone with plenty of headroom, splitting hairs we’d say that in certain settings the KOT is a touch less compressed in the high end and a touch less congested in the lower mids, but we couldn’t swear to it, yes they are that close!

The Duke even replicates the internal treble trim pot of the KOT to tweak the top end response to perfectly suit your setup. As we wind up the gain in all pedals, quite remarkably given both its form factor and price, it’s clear the DOT shares many of the sonic qualities of both of its elder statesman. Effortless sustain and a liquid feel under the fingertips, along with a superb dynamic response all add up to a simply superb overdrive tone. 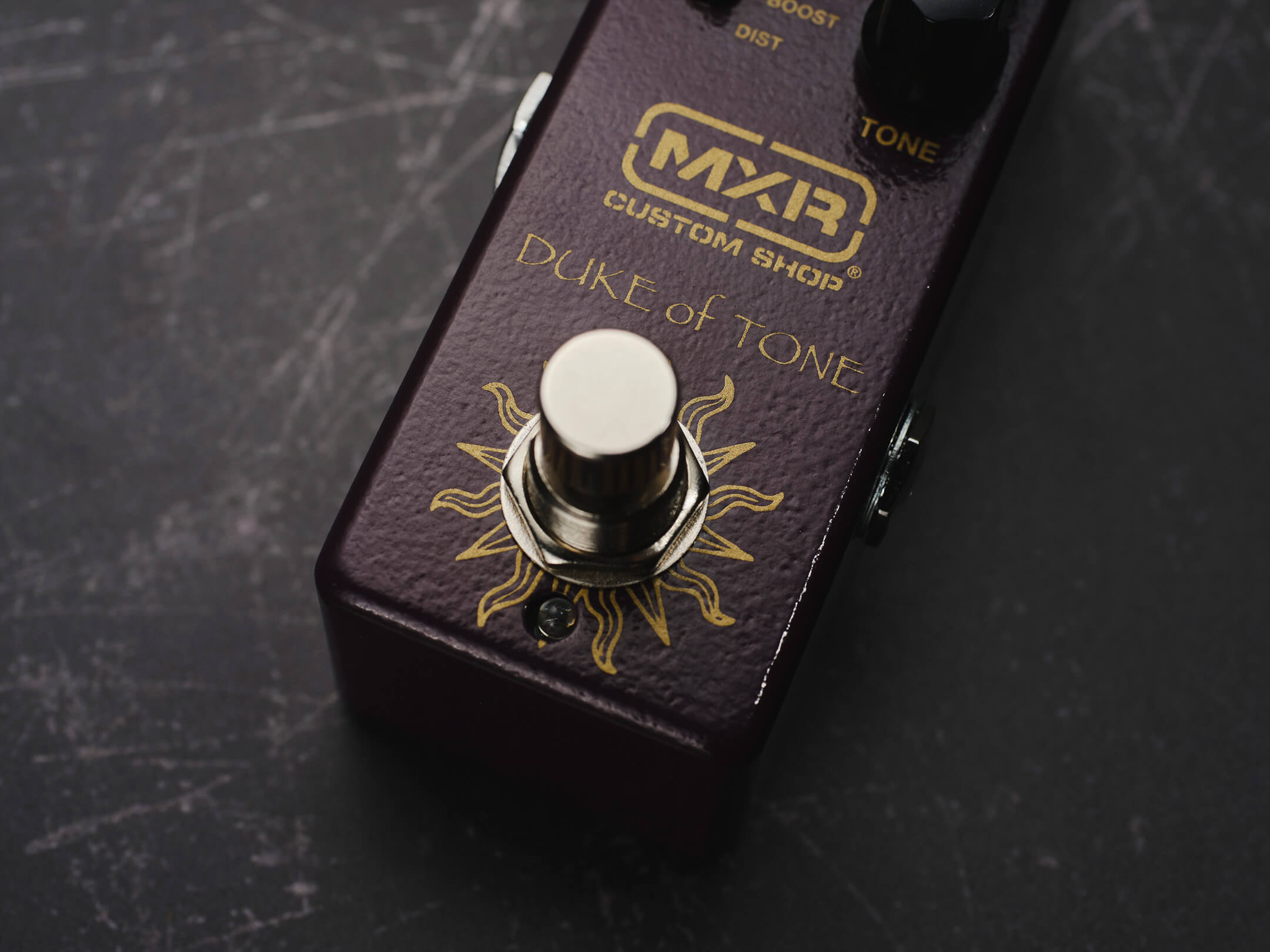 In higher gain settings we feel the DOT has a touch more thickness in its lower midrange overall, especially as you wind up the gain compared to the KOT. This isn’t necessarily a negative however, where some players may struggle with the extremely honest dynamic clarity of the KOT, the DOT does envelop your notes with a touch more comforting compression and thickness, particularly useful with a single-coil guitar. In fact, the DOT in higher gain settings, edged closer to the Bluesbreaker’s thicker, midrange heavy voice than the KOT can manage.

In a live band the slight added lower midrange congestion of the Duke can lead to a thicker and bolder tone in similar settings, and in certain situations we preferred it to our KOT as a lead boost – in all ways this is a simply outstanding job by MXR and AnalogMan.

Even ignoring the Duke Of Tone’s boutique heritage, this would be an exceptional gain pedal in its own right – and in some ways its a more practical pedal than its venerable forebear. We prefer the convenience of an external switch to change from OD to Dist, as opposed to having to open up our old KOT to the same job, while its size is also much more pedalboard-friendly – you could fit it on pretty much any ‘board or rig.

It might not have the versatility of the King Of Tone’s dual-pedal operation, but if you wanted to mimic that, a pair of Dukes would cover a huge range of tonal ground. Our only complaint, if we must find one, is we’d love the LED to change colour to indicate which mode the Duke is in – but that’s a very minor quibble and otherwise we’re struggling to find any faults with this remarkable little pedal.

So the King is dead, long live the Duke? Well, perhaps not quite, but there’s no doubt that this does an incredible job of democratising one of the boutique world’s most mythologised designs. Even if you have an original KOT, we’d argue there’s room for both on your royal board.