Kemper has changed the game for gigging guitarists once already. Can packing its Profiling technology into a roadworthy floor unit repeat the trick? 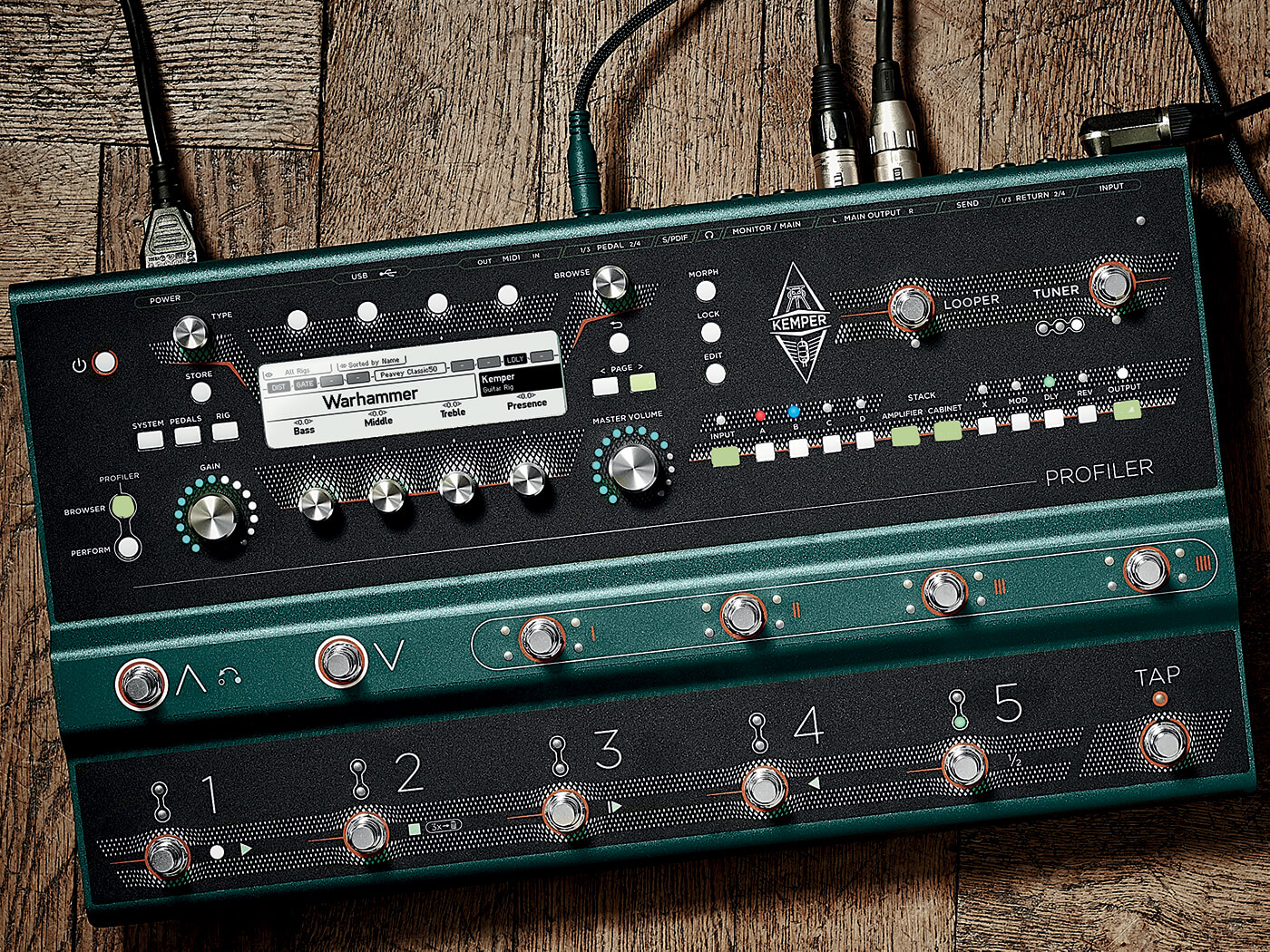 All of Kemper’s revolutionary profiling technology in a compact and practical floor unit.

With Line 6’s Helix and Fractal’s AX8 released in 2015 and 2016 respectively, Kemper is by some distance the last of the digital modelling world’s ‘big three’ to arrive at the floorboard party. It may be a case of ‘better late than never’, especially if the revolutionary features of the flagship head and rack versions translate to the Profiler Stage.

Any piece of equipment designed specifically for live use needs to be able to withstand the rigours of the road and at first glance, the Profiler Stage’s sturdy chassis looks more than capable of meeting such a challenge, while still retaining a similar control-panel layout to the existing versions, which attempts to visually represent a physical signal chain.

On the right-hand side of the unit beneath the looper and tuner footswitches is a strip of buttons. The pair in the centre labelled ‘amplifier’ and ‘cabinet’ represent your virtual stack. From left to right, the input button (representing your guitar input) is followed by four soft buttons labelled A to D, to which you assign those effects that normally feature before the preamp, such as distortion, wah-wah and volume effects.

Between the ‘cabinet’ and ‘output’ button on the right are a further four buttons that simulate a virtual effects loop, and thus are reserved for effects such as delay, reverb and modulation. 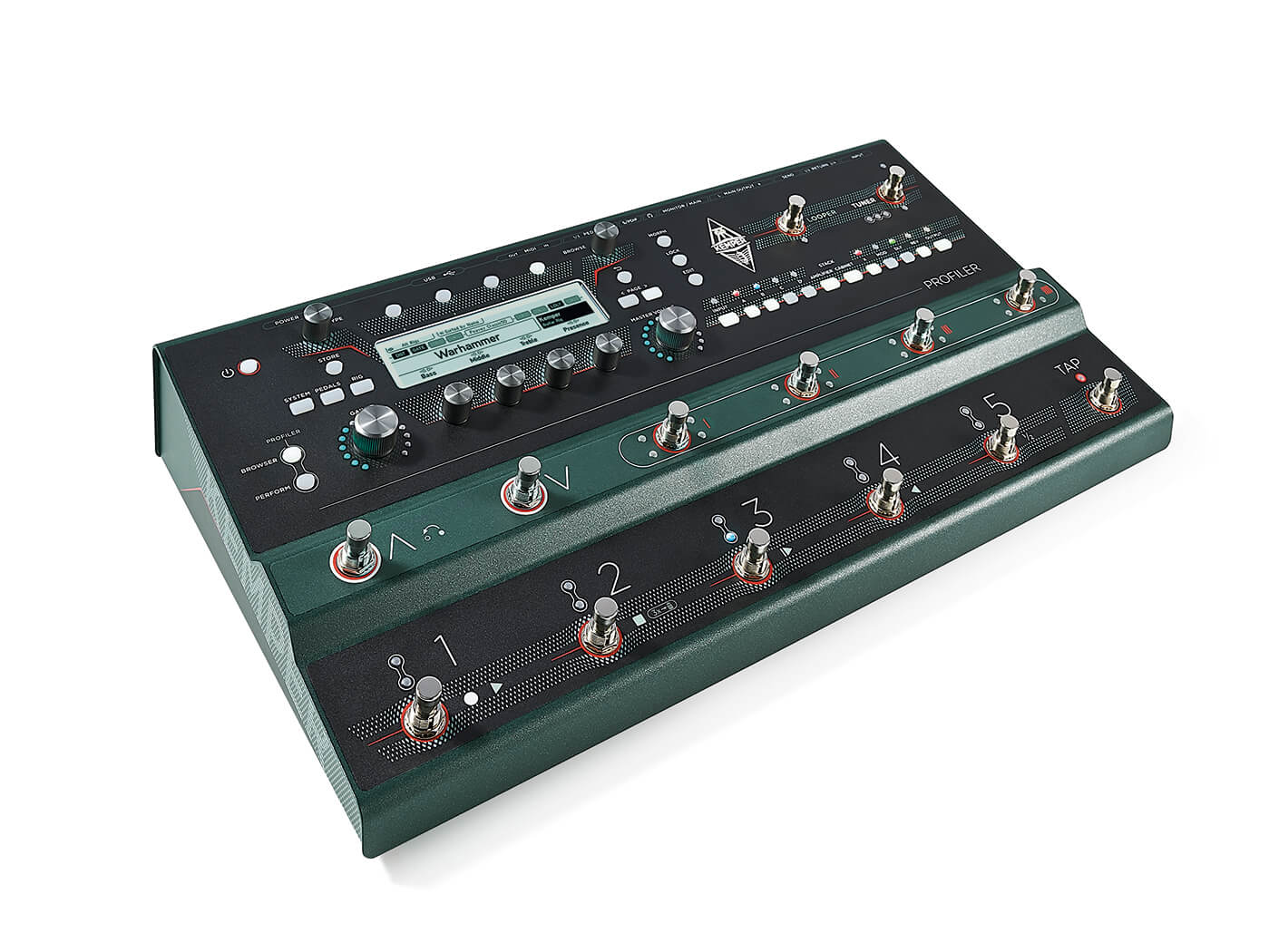 The foot controller section of the Profiler Stage is practically identical to Kemper’s Profiler Remote footswitch unit. Two rows of six buttons have been arranged to provide bank switching, patch switching and effects assignment, with a dedicated tap tempo thrown in for good measure. Switches one through five are where individual ‘rigs’ (amps, cab, and pedal setups) are stored and the up- and down-arrowed footswitches immediately above them are used to scroll through the 125 banks.

There are two usage modes: ‘Browser’ and ‘Performance’. In Browser mode, you can flick through the hundreds of included rig profiles, from vintage Fenders to aggressive Diezels and everything in between.

Performance mode is where you determine how the various footswitches are set. A popular template is to opt for switches one to five to transition from clean to several shades of mean, but it’s up to you. For each rig, you can also assign specific effects to the row of footswitches marked I-IV. For example, if one of your rigs presets has an overdrive pedal in the chain, you can assign this to one of these switches and toggle it on and off as desired. 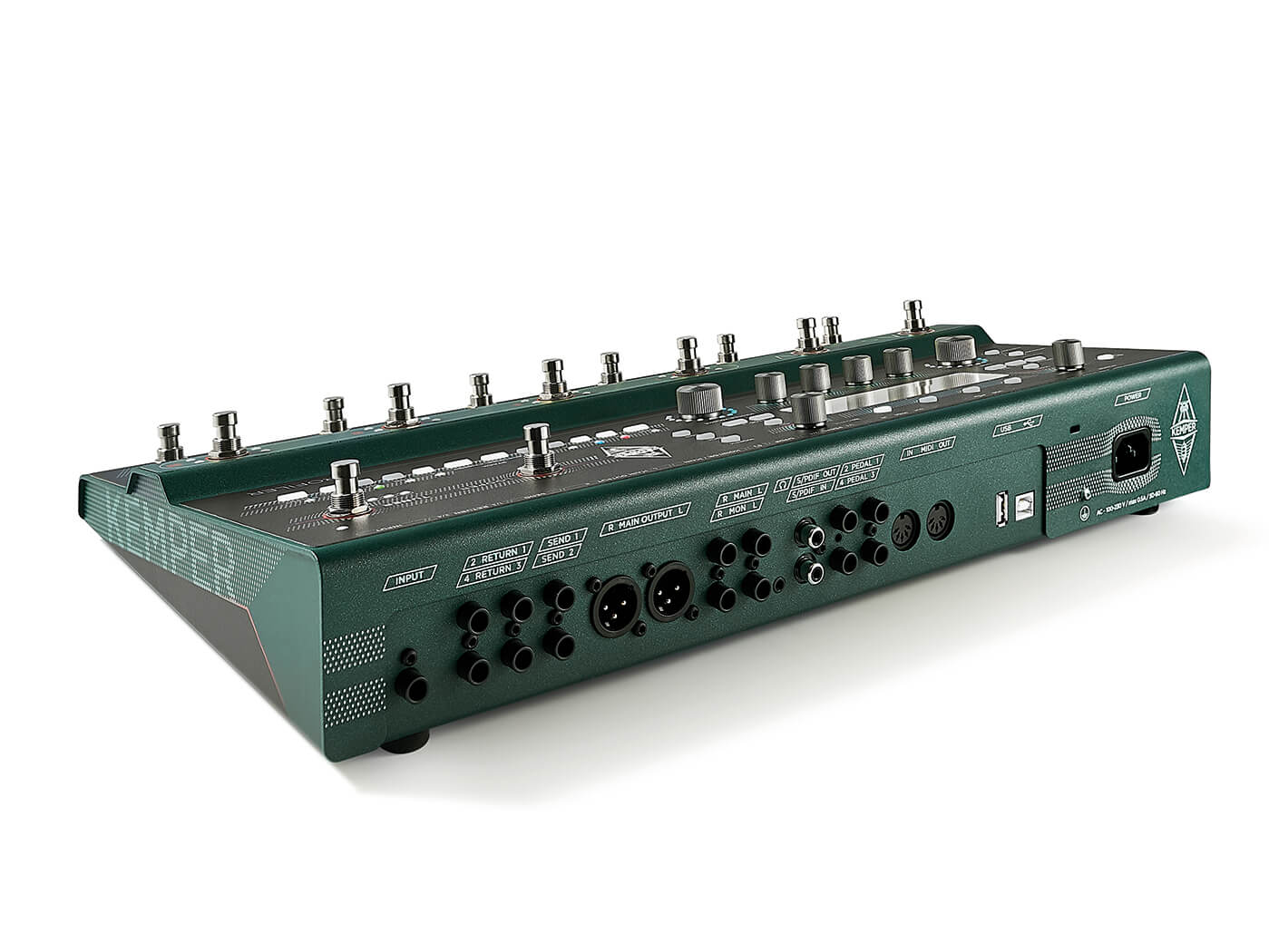 The edit menu is straightforward enough to use, but the small screen seems a little ‘old tech’ compared to some of the competition. Although Kemper offers its computer-based Rig Manager software – via which it’s possible to browse and audition rigs in greater detail – it’s not editing software per se, as editing parameters must still be carried out via the floorboard itself. We’re not alone in hoping that app-based editing over Bluetooth isn’t too far down the line – Eventide’s H9 Control app is a great example of how this can be both time-saving and encourage creativity in real-world scenarios.

The Stage’s main output can be sent to the PA via a stereo pair of either quarter-inch jack or XLR connectors, while an additional monitor output (via another pair of quarter-inch jack sockets) is designed to be fed either to an onstage monitor/FRFR amp or your in-ear monitoring system. The signals can be set independently, so you can adjust your monitor level without affecting the signal routed to the front of house.

With the wealth of profiles onboard, the almost limitless number available for download and the ability to make your own, it’s nigh-on impossible not to stumble upon a sound that will inspire you. However, in our experience, to get the best out of the Kemper – if you are not planning on profiling your own equipment – it’s good to have an idea of the amplifiers you want to hear, rather than aimlessly scrolling through hundreds of rigs. 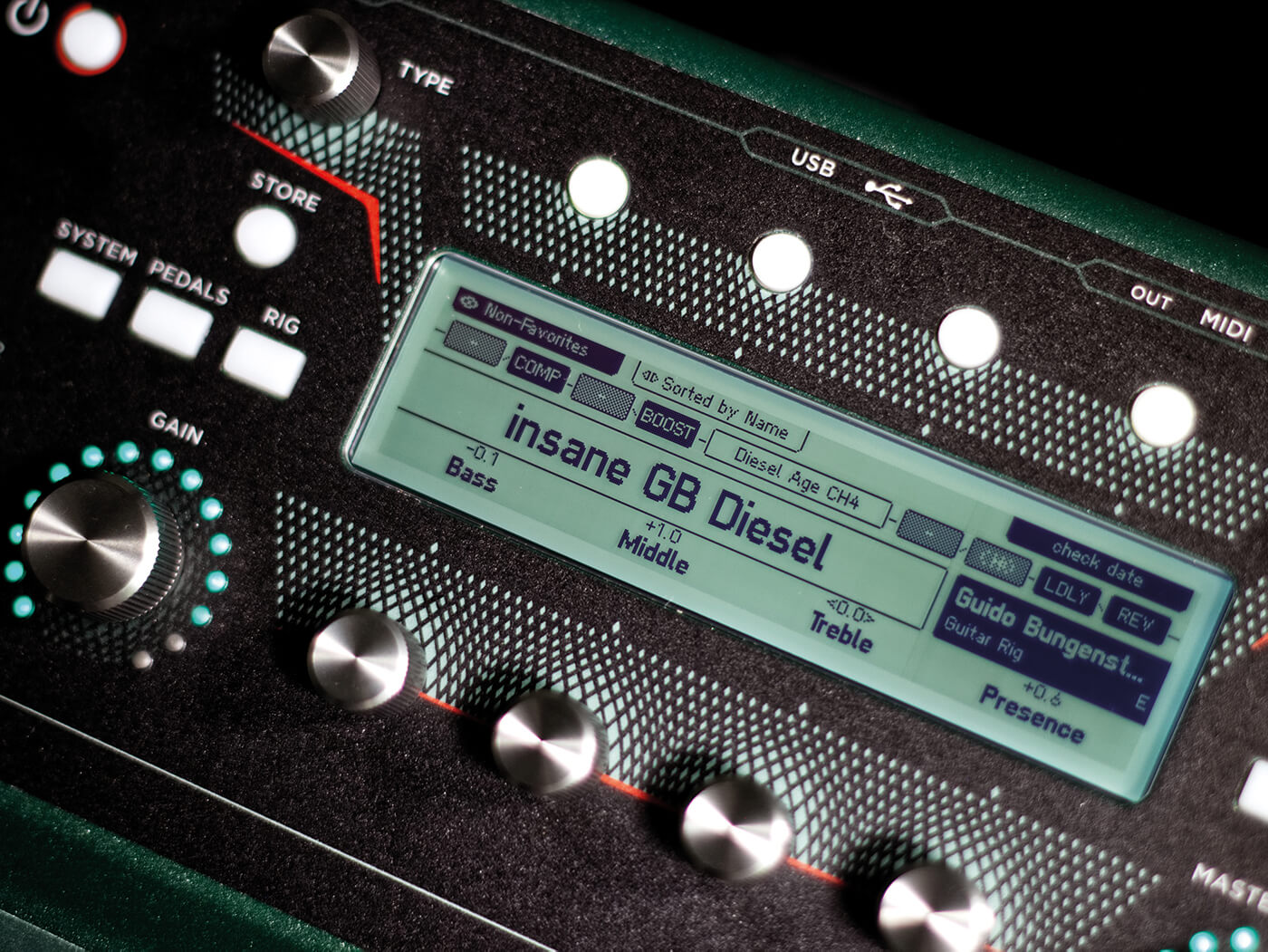 This was something of a eureka moment for us – it was at that point we began to appreciate exactly the wealth of tones at our fingertips. On the lookout for Plexi-style sounds, we find those onboard both eerily accurate and utterly inspiring. On the advice of our esteemed editor, we download a 5E3 Deluxe profile and its tweedy goodness leads us into jazzier territory, while the stunning Michael Britt profiles of a Ceriatone Dumble clone help us tap into our inner SRV.

Quite simply, any sound you want is either at your fingertips, or available for download from a third party. That said, it’s important to remember these sounds are digital snapshots of a specific setting of a mic’d amp and not models of amplifier circuits and as such, they rarely stand up to extreme EQ and gain alterations.

As thousands of working musicians have discovered, the benefits of using a digital modelling system live are indisputable and can eventually become indispensable. All your sounds can be auditioned and pre-loaded in a pre-programmed foot controller (including any level changes or solo boosts). They can then run straight into the PA every night, without being at the mercy of capricious intangibles such as venue acoustics or a sound engineer that isn’t familiar with your music, or hates music altogether. 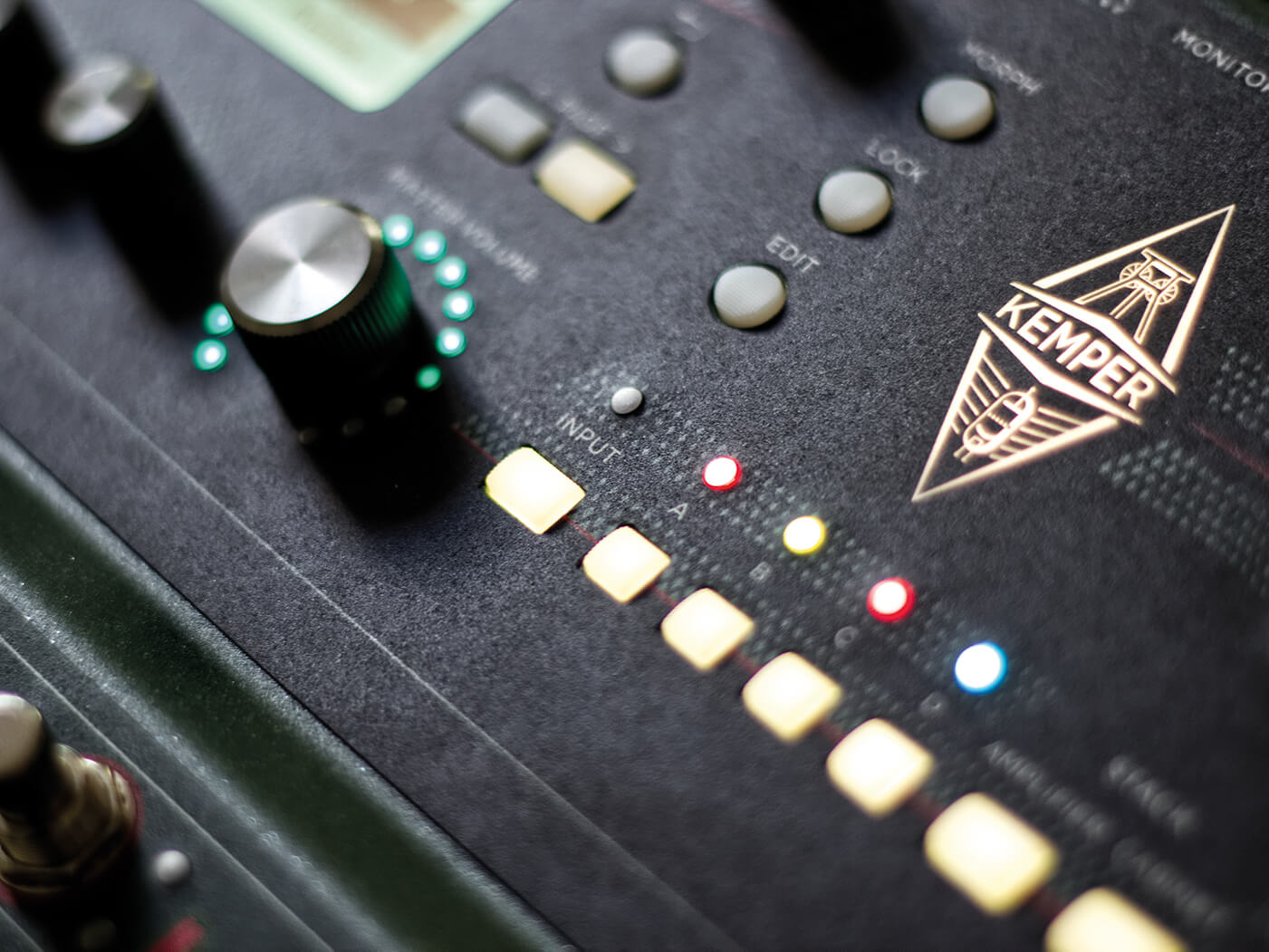 In addition, the lag between patch changes on the Kemper Stage is virtually non-existent, making it possible to switch from a crystal-clean Fender-style tone to a screaming hot Dual Rectifier without even a momentary dropout. It’s something that some of the competition can’t boast – and a big plus for players who rely on quiet/loud dynamic shifts.

If you haven’t yet been convinced to make the jump from analogue to digital, the ease of transition the Kemper Profiler Stage offers – not to mention the compact and practical form factor – means there’s never been a better time to embrace modernity. Like countless others, you are unlikely to regret it. 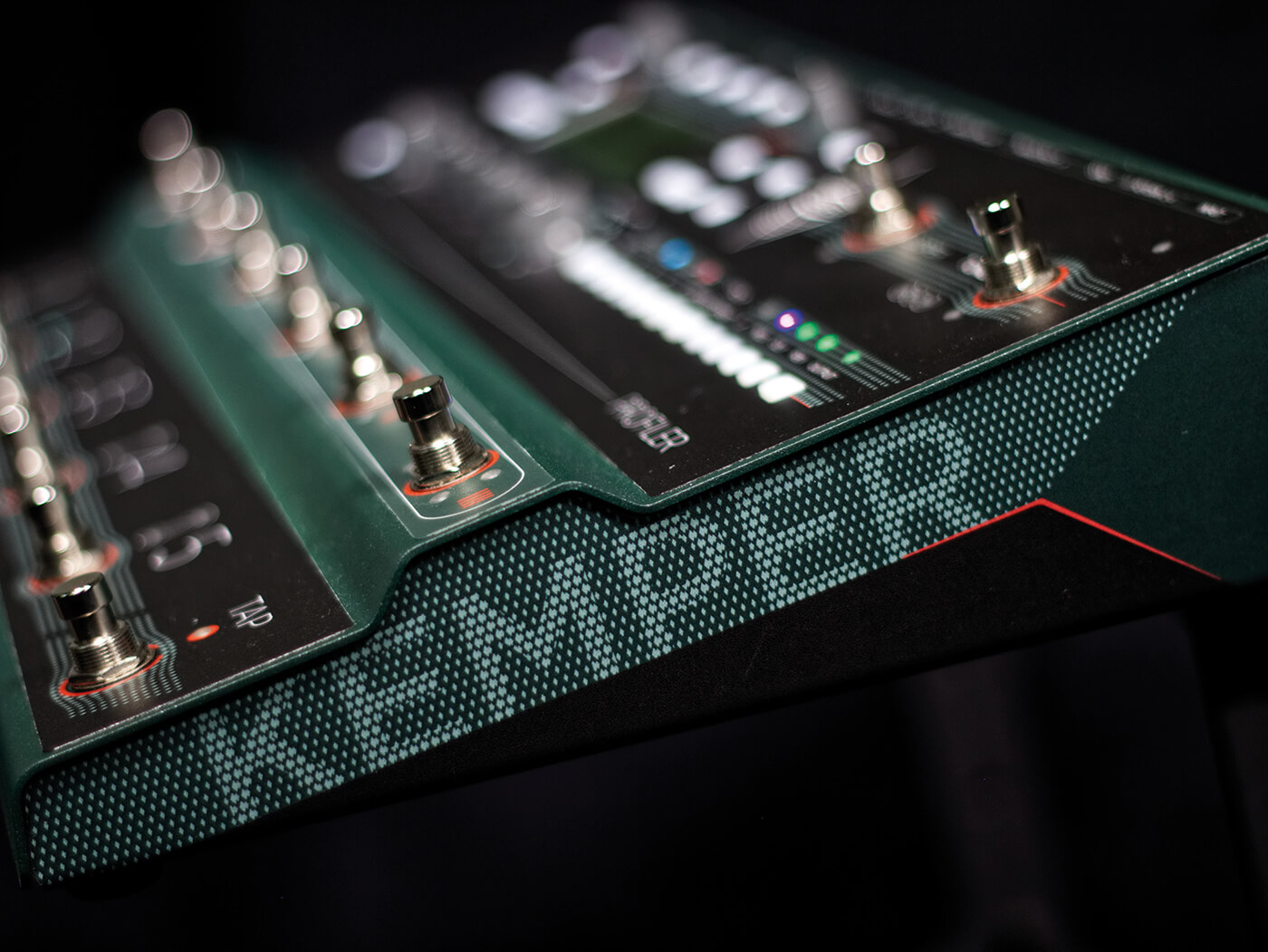