The pop megastar’s Sheeran by Lowden collaboration is the biggest new development in artist endorsement deals, and it shows that the guitar world is learning lessons from the worlds of fashion and beauty… 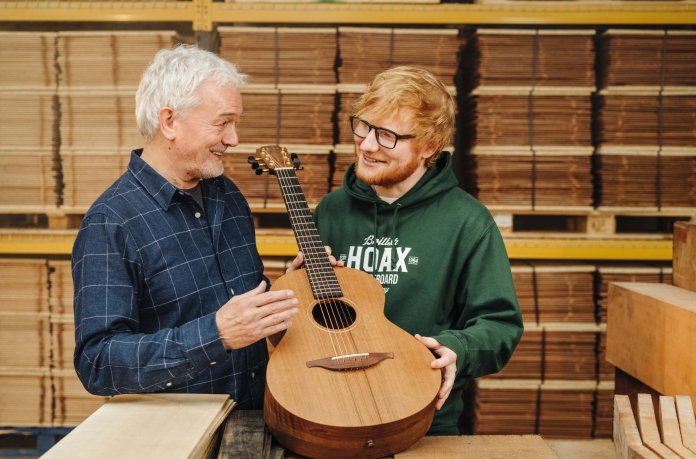 If you’re going to start a revolution, the plush surroundings of the Sheraton Park Hotel in Anaheim, California might not be the most obvious place to do it. Yet that’s exactly what Lowden Guitars did on the eve of NAMM 2019, when the company gathered a small group of journalists and retailers in the hotel’s garden and brought out the most famous guitarist on the planet.

For those of us who were at the Sheraton that evening, the announcement of Sheeran by Lowden instantly felt seismic – something bigger and more interesting than the standard artist collaboration. Of course, artist endorsements are nothing new in the world of guitar – just ask Roy Smeck, Buck Owens or the most famous guitar endorsee of them all, Les Paul – but the implications of this felt different, and hugely significant for the wider guitar industry.

This was confirmed by the presence of CNN at the public press conference announcing the brand the following day – global news outlets don’t tend to show up at guitar launches, after all – but why should this be so different to one of the hundreds of signature products launched at NAMM over the years?

Well, the answer is twofold. Firstly, Ed Sheeran is, as mentioned, the most famous guitarist on the planet, the biggest selling artist in the world in 2018. And secondly, he’s not just putting his name on a guitar. He’s starting a business.

You need only load up your preferred social-media platform, or indeed walk into any department store, and you’ll see that we live in an age where celebrities are no longer just endorsing products. Instead, they’re creating them themselves, marketing them themselves and generally raising the profile of their products to dizzy heights in very short order.

This isn’t a totally new concept, of course. The Jordan sub-brand has become a $3-billion-a-year business for Nike, while Beats Audio made Dre hip-hop’s first billionaire when he and Jimmy Iovine sold the company to Apple. What’s different in 2019 is the speed and force with which celebrities can build brands out of nothing.

Just look at Kylie Jenner. The youngest member of the Kardashian brood has parlayed her global celebrity and giant social-media following into becoming the world’s youngest self-made billionaire at the age of just 21 – primarily on the back of her barely five-year-old Kylie Cosmetics range, which was sold exclusively through the Ulta Beauty chain.

And that’s why before the guitars had even hit the shelves, Sheeran by Lowden was already one of the most important acoustic-guitar brands in the world – because it instantly has the ability to reach an audience that traditional guitar brands can only dream of.

Take Lowden, for example. The brand currently has about 41,000 followers on Instagram, while Ed’s former guitar partner Martin has around 450,000. Ed himself? A hair short of 28 million people. Now you can argue that the majority of those people might not be interested in guitars, but they’re interested in Ed Sheeran – and if they also do happen to want a guitar, you can bet that a Sheeran by Lowden is going to be on their must-try list.

So that’s the marketing justification then, but what’s in it for Ed? He sold loads of his Martin signature models and no doubt would have continued to, so why up sticks from one of the ‘big two‘ acoustic brands for a boutique luthier in Northern Ireland that makes fewer guitars in a year than Martin makes in a day?

Well, the most basic truth is that Ed clearly, evidently loves the brand – the genuine warmth and affection between Sheeran and George Lowden was palpable at the launch event.

But there’s more to it than that. Creating Sheeran by Lowden gives Ed something more than a name on a headstock – it gives him his name above the door. With that comes the control and freedom to create something that is truly his, and truly long-lasting.

It also enhances his credentials as a guitarist and musician. It’ll be harder for people to dismiss him as ‘just another pop star’ now he’s demonstrated his love for fine boutique guitars so much that he’s started his own brand with one of the most respected names in the business.

And from Lowden’s side, the benefits are even more palpable. The association with Sheeran has huge and obvious benefits in terms of visibility and audience, but it also enables what is very much a family-oriented company to grow in a secure way.

George Lowden knows the risks associated with trying to mix it up with the big boys at the entry-level end of the acoustic market better than most, but in Sheeran by Lowden, he’s come up with an innovative and secure platform on which to expand, building a state of the art factory in Northern Ireland and securing the legacy of his company and his brand long after he hangs up his fret file.

The Sheeran by Lowden venture is clearly the most visible and potentially important example of guitarists taking full ownership of the instruments they play, but you don’t have to look hard to see that the concept is catching on and giving guitarists the freedom that they might not get were they simply doing signature models with big brands.

One notable example here is Tosin Abasi. The Animals As Leaders guitarist has worked with Ibanez in the past, but his new Abasi Guitars venture has seen him create – in the Larada – a guitar that is as unconventional and challenging as his music.

There’s also Rob Chapman. The YouTube star might never have had a hit record in his life, but he’s been savvy and smart enough to see that in the age of the social influencer, having a passionate following on social media can open doors that might otherwise be closed to him. Chapman Guitars’ crowd-sourced guitar concept is extremely smart – getting fans involved and invested in a brand at the design stage is a surefire way to improve your chances of selling them, and the huge sales and rapid expansion of the range is testament to how well it’s worked.

John Mayer is a different but hugely informative example of how even a more conventional signature product can be elevated by the involvement of an artist with the right kind of social-media marketing savvy. As anyone who’s browsed his Instagram will be aware, Mayer is hugely embedded in the fashion world and the cutting-edge marketing therein. He’s even been involved in that arena himself, via collaborative lines with Nike and most recently, Japanese streetwear brand Neighborhood.

It makes sense then, that when it came to releasing his signature PRS Silver Sky guitar in 2018, Mayer adopted the principles used by the likes of fashion brand Supreme to tease and hype the guitar in advance of its launch, which in turn led to an outpouring of opinion across the internet when the guitar finally dropped.

While the reaction was by no means universally positive, the critical mass of hype and publicity that Mayer’s carefully considered pre-launch campaign whipped up led to a demand that overwhelmed PRS’s most optimistic expectations of how it would sell.

Creative partnerships aren’t always fruitful, however, and show the importance of judging that meeting of artist and brand correctly. Remember the PR disaster that was the Gibson-made, Jimi Hendrix-branded S-types from 2009? The concept was so flawed that the project was canned within 24 hours of it being announced, such was the negative force of the backlash.

And more recently, Danish effects firm TC Electronic was burned when the internet caught wind of the Pussy Melter – the signature pedal of Steel Panther man Satchel – and quickly withdrew it after an understandable furore. Interestingly, Steel Panther’s response was to release the pedal themselves… another example, although perhaps not the most positive one, of an artist being able to exert full control over their gear if they take ownership of it.

So what does all this mean for the future of guitar? Well, the likes of Sheeran, Abasi, Chapman and Mayer are not random outliers. Guitarists are starting to see their worth as brands, just like their counterparts in sports, entertainment and almost any other field and the result of that will be more and more examples of them wanting more than just a name on a headstock when it comes to the gear they play.

And while that probably won’t have too much of an effect on the heritage brands we all know and love, it’s certainly likely to make the guitar landscape a much more varied and pluralistic place – and that can’t be a bad thing for anyone.

Read our review of the new Sheeran by Lowden guitars here.