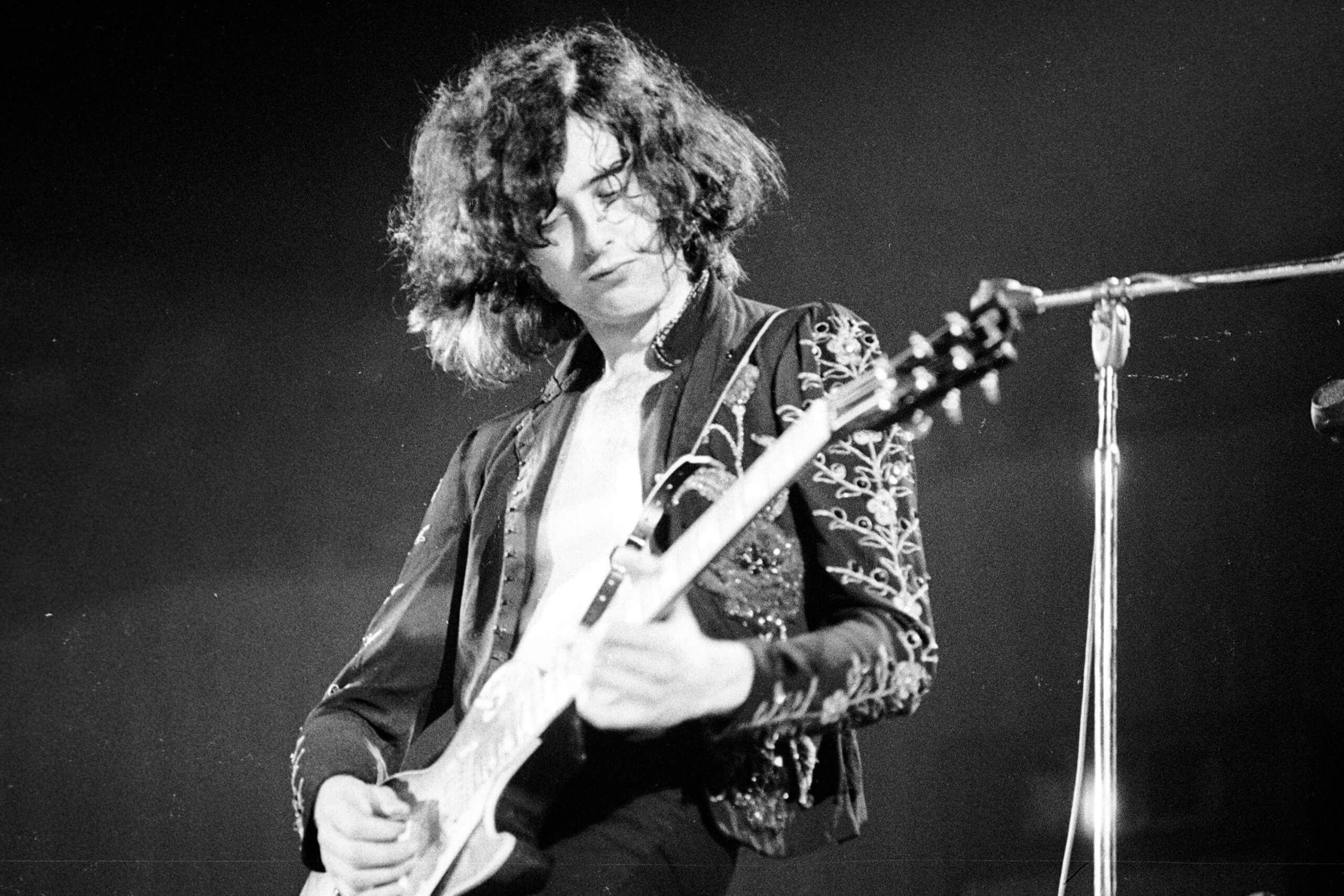 Guitar Legends: Jimmy Page, the father of hard rock who was more than ‘just’ a guitar player

Inside the gear and guitar style of Led Zeppelin legend Jimmy Page, with review links, alternative gear choices and a playlist.

Even in the pantheon of UK guitar elders – Clapton, Green, Gilmour, Beck, Townshend, Richards et al – there’s not one who can really compare to Jimmy Page. Page was one of a select group of session players in London’s mid-60s scene, even before he made his name in rock. It was here, from the age of just 17, that he learned the discipline of studio work, became a producer before he was 23 (and still younger than his charges), and befriended future Zeppelin bandmates John Paul Jones and John Bonham.

His 6-string credits on hit records of the 60s are numerous and sometimes often hard to even spot – his guitar graced singles by Them (Here Comes The Night), John Barry’s 007 theme (Goldfinger), Lulu (Shout), Herman’s Hermits (I’m Into Something Good), Petula Clark (Downtown) and even Val Doonican (Walk Tall). Many of these were just the bread and butter of a jobbing sessioneer.

But Page also contributed to other more notable releases in the 60s: The Who’s debut 7-inch I Can’t Explain, a pre-Velvet Underground Nico (The Last Mile, which he co-wrote and produced), Donovan’s Hurdy Gurdy Man, Joe Cocker’s With A Little Help From My Friends, Chris Farlowe (Out Of Time), The Nashville Teens (Tobacco Road) and even a recording by David ‘pre Bowie’ Jones with The Manish Boys (I Pity The Fool).

Cut loose of others’ demands, he made his mark briefly with The Yardbirds with Jeff Beck also on lead guitar, but – as we know – fully realised his own ambitions with Led Zeppelin (originally called The New Yardbirds) from 1968. His earlier studio education certainly went to good use, as Zeppelin romped through a series of diverse albums and he stretched out as a producer.

At the same time, Zeppelin became the most-lauded live band of the 70s. Post Zeppelin, some of his releases have been hit and miss: two more albums with Robert Plant stand up well, the ones with Free’s Paul Rodgers (as The Firm) less so. A one-off CD with Deep Purple/Whitesnake’s David Coverdale was workmanlike, as was Outrider, the only release credited so far as a ‘solo’ album, and his soundtrack work hides his ‘guitar hero’ status in the shadows. But all of these play a part in Page’s make-up: he’s long-insisted he doesn’t see himself as ‘just’ a guitar player. So much so, that he’s talked of plans for a further solo release for over 15 years… but as yet, he’s unhappy (or unwilling) to release what he’s already recorded…

In his own words…

“It doesn’t surprise me that the diversity and breadth of what we [Led Zeppelin] were doing was overlooked or under-appreciated at the time. Although it wasn’t overlooked by those who were buying the records. I think Melody Maker dismissed the fourth album in one paragraph. That’s fantastic! But reviews are very transient. It doesn’t matter now what they said, does it?”

“The beauty of playing in the band was that when we went onstage we never actually knew what was going to go on within the framework of the songs. They were constantly changing. New parts would come out on the night. The spontaneity was on the level of ESP, which meant it was always exciting.”

“Many people think of me as just a riff guitarist, but I think of myself in broader terms… As a record producer I would like to be remembered as someone who was able to sustain a band of unquestionable individual talent and push it to the forefront during its working career.”

Page told the BBC in 2005 that he owned “around 1,500” guitars, and The Anthology details the best and most famous of those. If you can’t afford the book – it’s limited edition and listed at £495! – there’s still some details that Page has previously shared. You can forget buying a ‘replica’ Jimmy Page rig in totality as well, but there are plenty of more (just about) affordable options to investigate…

In his session days, Page often used a 1960 Gibson Les Paul Custom ‘Black Beauty’ model, bought new in 1962 for £185. Page had it retrofitted with a Bigsby vibrato, and you can see it on the cover of the 1960s no-Zeppelin compilation album Jimmy Page And His Heavy Friends. Owning a similar original is a bit of a pipe-dream for most of us, but for a little history read our assessment of a later 60s Les Paul Custom. Note that Page’s original went missing in 1970 mid-tour… he was eventually reunited with it in 2016.

When Page first joined the Yardbirds, it was to replace the just-quit bassist Paul Samwell-Smith, mostly playing an Epiphone Rivoli. When he also took up the guitar with the Yardbirds, he mostly played a 1959 Fender Telecaster that had been to him by Jeff Beck – it was Page who had originally recommended Beck replace Eric Clapton in the band. When Beck himself left, Page was suddenly on his own. He cemented his new central position by adding mirrors to the Telecaster. Later, he stripped it back and painted his own Dragon artwork. Both guitars were replicated by Fender in 2019, and here’s Jimmy telling Fender the story.

The Telecaster was used for most of Led Zeppelin I, and the solo in Stairway To Heaven is also on this Tele. Though in 1969, a well-meaning but idiotic friend had stripped the Dragon of its finish when Page was away on tour.

Page bought his ‘Number 1’ Les Paul Standard from guitarist Joe Walsh in mid-April 1969 for $1,200… and went on tour with it immediately (replacing the 1959 Tele). In Walsh’s hands, it had already been refinished and had repairs (meaning there is no serial number) but it’s believed to be a ’59. This is his most famous guitar, used on everything from Whole Lotta Love up to much of the Walking Into Clarksdale album with Robert Plant (1998), to half of the final Led Zeppelin show at the London O2 in 2007.

His Number 2 Les Paul Standard is a ’59 and was acquired in 1973, as a backup and for alt tunings as well. It’s usually distinguishable by the black bobbins of the uncovered neck pickup. This one has also undergone various mods over the years. Importantly, the necks on Page’s Les Paul Standards are shaved very low… meaning even if they are both 1959s, they may feel more akin to the slimmer feel of a 1960 to some players.

Read our review of the Gibson Custom 60th Anniversary 1959 Les Paul Standard. For a Page-alike LP that’s a little more affordable, consider something such as Gibson’s Original Collection Les Paul Standard, or mod your existing guitar with Page-style wiring.

Another guitar regularly used from his session days was his Danelectro 3021. Launched in 1959 and with its two ‘lipstick’ pickups, this little number offered very different tones to Page’s Gibson Black Beauty. In Zeppelin, Page used his Dano With Zep, primarily in alternate tuning for White Summer/Black Mountain Side as well as a few other songs. If you want similar these days, you need to hone in the model now called a Danelectro DC59 – Page’s was plain black, but the DC59s also come in an array of finishes.

Although the double-neck is perhaps theenduring icon in Page’s arsenal, it was only bought originally for live work – he needed something, in particular, to play the whole of epic Stairway To Heaven. Page ordered one of the rare double-necks from Gibson and debuted it live in 1971. Indeed, there are only two confirmed uses of the EDS-1275 on studio recordings: on Zeppelin’s Carouselambra (on In Through The Out Door) and Page And Plant’s Please Read The Letter. It became so iconic, though, that Alex Lifeson and Slash got their own 1275s, inspired by Page. And check out this lovely model belonging to Rival Sons’ Scott Holiday.

In the 1960s, Big Jim Sullivan was the king of the hill when it came to UK sessions. He took the young Page under his wing though, as the pair’s paths would often cross – it wasn’t long before Page was known as ‘Little Jimmy’ to producers (not because of his stature, but due to seniority). Having lent his 1963 sunburst Gibson J-200 to Little Jimmy a few times for sessions, Big Jim eventually gave him the guitar on long-term loan which he used up to Led Zeppelin III.

Babe I’m Gonna Leave You, Black Mountain Side and Your Time is Gonna Come were all played on the Big Jim J-200. Page also borrowed a J-200 belonging to producer Mickie Most to record some of the acoustic in Stairway To Heaven. Indeed, they maybe the same guitar: it’s not inconceivable Page left the J-200 with Most.

From 1970, Page acquired a Martin D-28 and returned the J-200 to Sullivan. Page has at least two D-28s: the first was acquired around 1970 (and is probably of that vintage) and his main one – he later installed a Barcus-Berry pickup system for live shows. The second is usually kept in alt tunings and can be distinguished by a small white star inlay on the pickguard. Here’s a review of a recent update, the Martin D-28 Modern Deluxe.

A much less-desirable acoustic (on paper) that Page turned to was his Harmony Sovereign H1260, used for the intro fingerpicking of Stairway To Heaven and much of Led Zeppelin’s live shows 1970-1972. Page took the Harmony to write much of Led Zeppelin III – it’s likely the recording guitar on Bron-Y-Aur and That’s The Way.

Despite Zeppelin’s gargantuan live backline, Led Zep album guitars were often recorded with small amps that sounded huge. Led Zeppelin I was recorded on a Supro Coronado, but tweaked by Page: details of exact mods are sketchy, but here’s our review of the Supro Black Magick Reverb which aims to capture that early Page sound.

Whether it was politics between Page and Supro, who knows… but Page issued his own Sundragon combo in 2019, which he promised to be more accurate and to his tastes. It’s hand-built and very expensive. We’ll leave his live backlines – Marshalls, HiWatts, Oranges, WEM, all sorts – out of this for now.

For effects, Page has used quite a bit but not as habitually as some. For his early sound, he had various Tonebender pedals (modded by Roger Mayer) and Vox wahs (ditto). SolidGold FX aims to capture the fuss with the Communication Breakdown pedal. And compare a Vox wah-wah to others.

You’ll no doubt be familiar with much of the Zeppelin catalogue already, but there are some true gems from elsewhere as well. When pushed, Page himself usually says he is most proud of Kashmir or Achilles Last Stand in the Led Zeppelin canon. Here’s a Spotify playlist, starting with his solo (and vocal) single of 1965, briefly summarising some of Page’s most-notable work…

For classic Page-like sounds, you need a mix of blues phrasing and chord tricks. Here’s How To Play Blues Like Jimmy Page. Here’s a Stairway To Heaven intro lesson and the solo as well.